(The rambutans pictured above are very much like a fruit we eat called mamoncillo, which have a completely different exterior. Both are similar to lychee in taste.)

I find myself traveling home way more often than I can afford these days.

In the middle of September, I left Atlanta for one month to attend my brother’s wedding in Hawai’i. It’s been three weeks since that lovely day in Angels Beach in Waimanalo Bay, though it feels as if just this past weekend we were sunbathing in nearby Waikiki and eating fresh pineapple out of tightly packed plastic bags.

It’s amazing how time flies. And, it doesn’t help that I’ve only just started to settle into my time zone.

My brother’s decision to get married in Hawai’i was the crux of family discussion and disagreement for the past year. Kind of unbeknownst to him, but we were all questioning Honolulu. None of us had ever been and planning a wedding over waters was a bit daunting. It was his (and his then fiancee’s) wedding so we had to put up our put out.

Clearly we put up and found ourselves a quaint, yet lackluster condo just 3 blocks from the beach. We figured all we needed were beds, a bathroom and a decent kitchen. After all, we weren’t going to be spending too much time boxed up. On the flip side, eating out is not always the most cost-effective way to survive in a pricey hot spot. And since eating local food is the most important part of traveling for our family, a formidable kitchen where we can cook is essential. 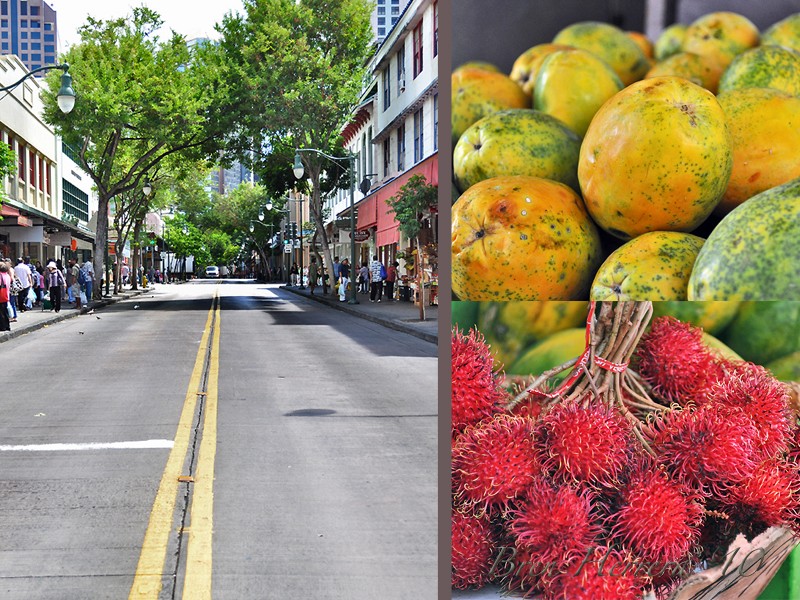 After settling in, we headed straight for Chinatown. Bro arrived a day before, had hit it up and recounted its facets. National Chinatowns are usually hit or miss for me, but I enjoy going. If anything, just to see foods I’ve never heard of. Being in Honolulu’s Chinatown was no different, actually.

When we first got there, I instantly felt like I was staring at a polished Old Havana in the face. Something about it had that vibe. Perhaps a subconscious connection to mami’s paternal family triggered the emotion. I met my Chinese grandfather just once and regretfully never got 1st hand stories of his literal Chinese laundry he ran and was robbed of during the Cuban revolution.

I digress, of course.

So, Chinatown was neat but not spectacular. The most attractive thing was buying papaya for .59 a pound and pineapple for not too much more.

[Update: I’m guessing the fruit below is mamoncillo, or green lychee. If  it’s the former,  I mention above are very similar to lychee in both taste and exterior texture but completely different in exterior texture to rambutans. I can only find mamoncillo in Miami, due to the tropical climate. And, I’d dare say they’re better than lychee. I can’t speak on it’s comparison to rambutans as I’ve yet to have some…crazy, I know, especially since there were crates and crates of them everywhere!] 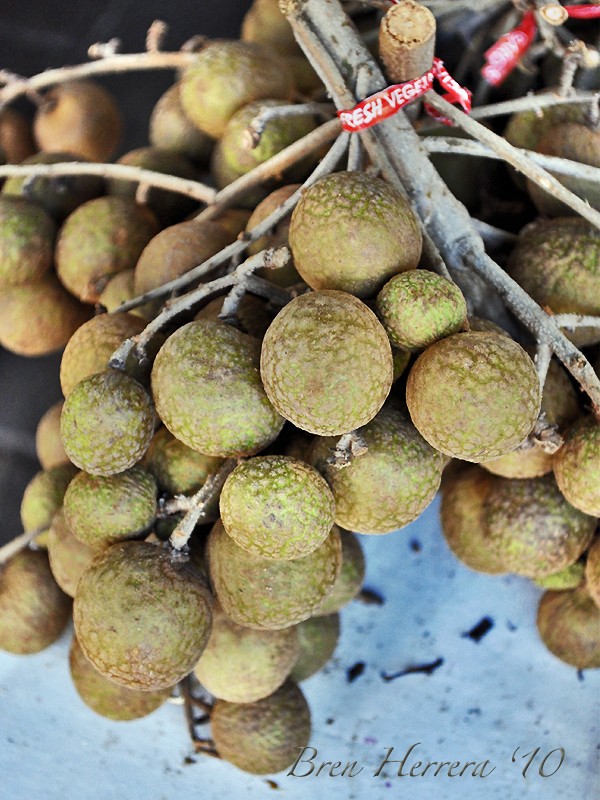 I saw a lot of new root vegetables I inquired about (like the daikon below) and varieties of seafood and fish I’d seen before but have never had. Super shiny anchovies which looked perfect for some kind of soup were expensive. Don’t you think? 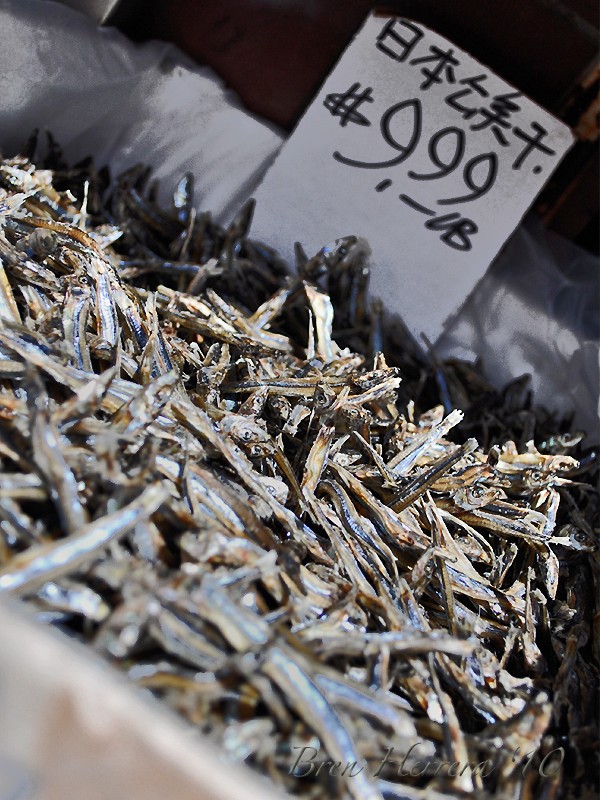 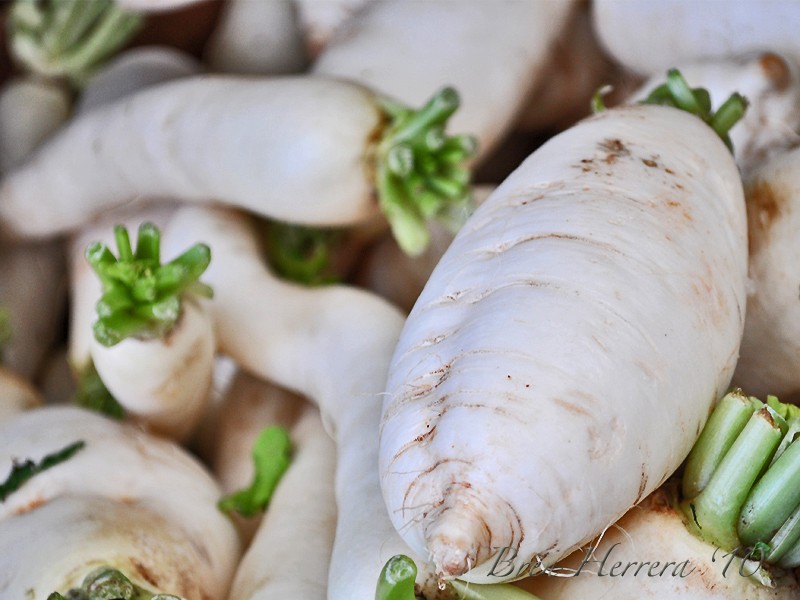 One such sea thing which still has me clueless is below. Does anyone know what this is?? I can’t find its source anywhere and oddly enough, not a single vendor understood what I was asking. Honestly, it doesn’t look edible to me 😉

We continued up and down the streets stopping at most of the vendor stands and purchased things here and there. The lychee was particularly beautiful and boldly eye-catching. We didn’t buy any, though restrospectively, it would have been useful in making a sexy cocktail for bro’s rehearsal dinner. But, I wasn’t thinking. Neither was mami. She was still consumed with the papaya and finding jasmine rice.

The dragon fruit was also lovely and reasonably priced. Boiled peanuts surprised me–I thought that was a Southern American thang. Abundance of rice paper was predictable but very colorful. 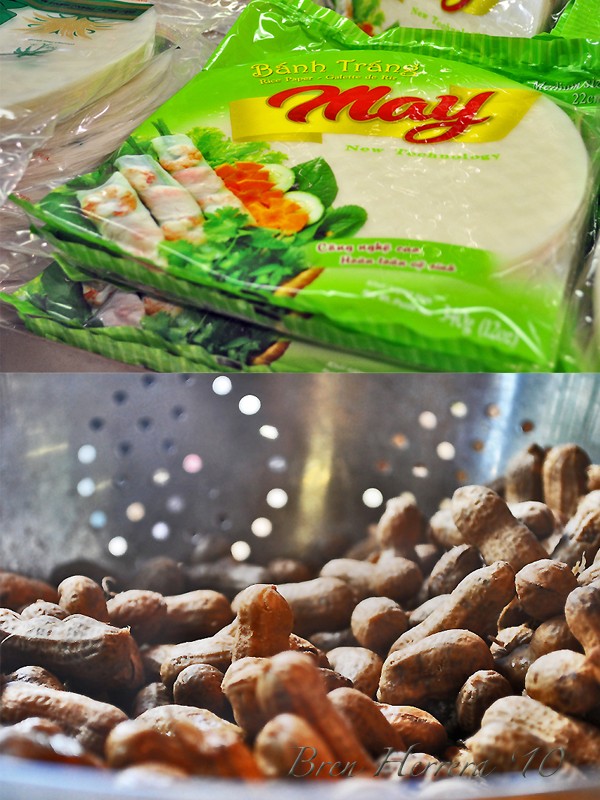 The ultra long string beans intrigued me just as much.  I’ve not worked with that length but am interested. It was great watching a local elderly woman purchase a thick stash. And I wanted to steal all the ginger they had!

Okay, maybe not steal as I did buy some. 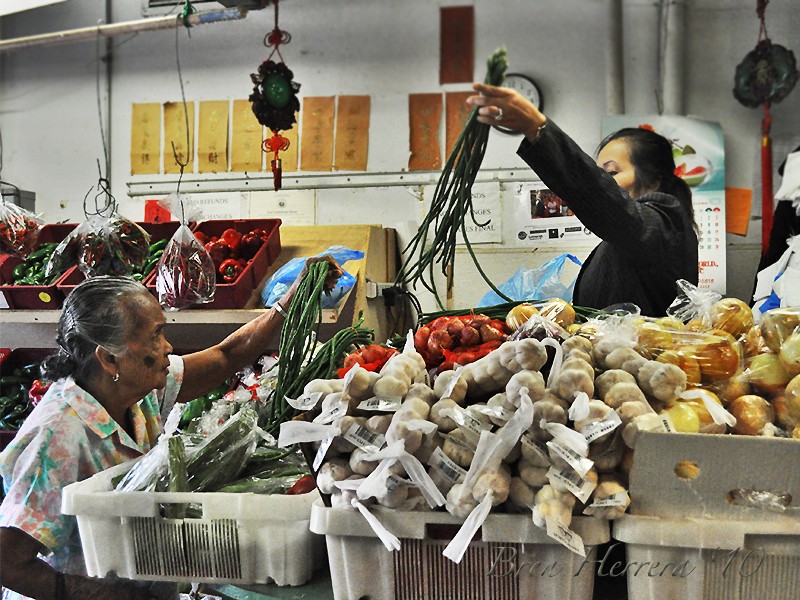 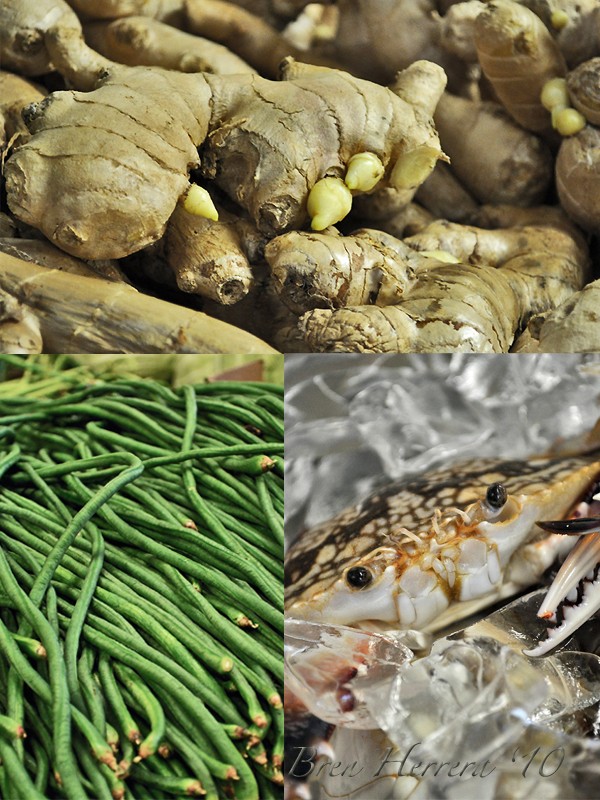 Boxes of flawless figs had me drooling. 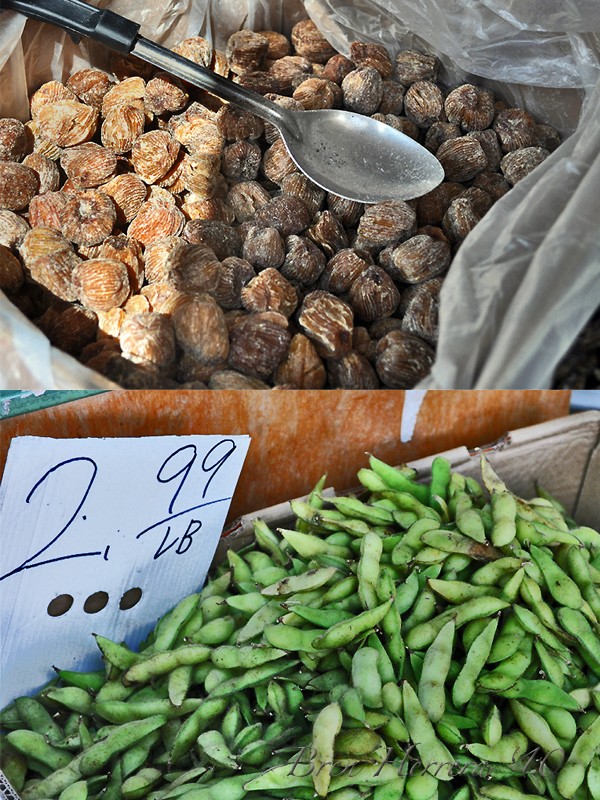 The visit to one of the indoor markets was thwarted by a sighting of roaches in the stands right at the door. I squealed like a child (yes, I loathe, hate, detest roaches) and ran inside to catch up to my unfazed parents. I perused the aisles and saw familiar staples like rice, beans, peas, fresh tamarind,  soybeans, even canned lychee, etc… 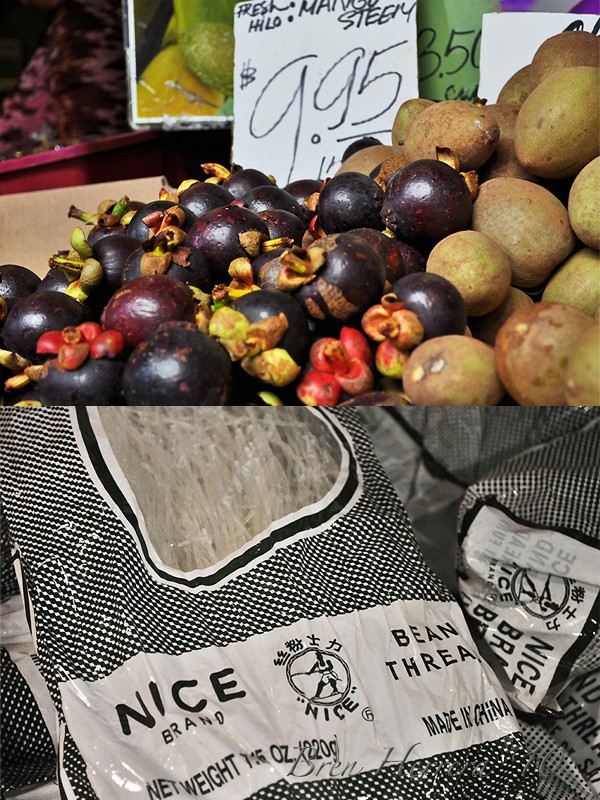 And, then newbies to me like this wormy looking thing.

Any thoughts on it? 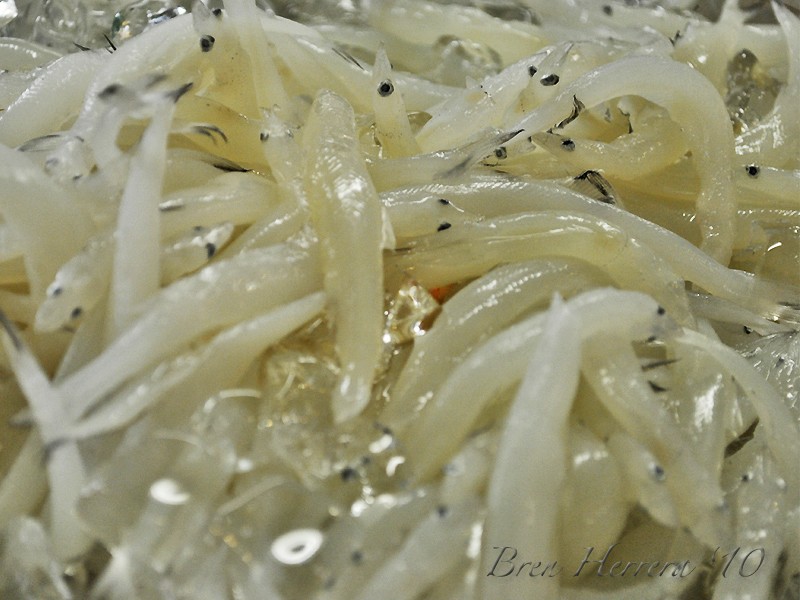 We walked out of the foul-odored market with rice, jasmine tea, tomato sauce, fresh mahi-mahi, with papaya in tow. Oh, and this unappetizing basil seed drink which was akin to drinking liquified  lychee gel. I drank it all but would totally pass next time. 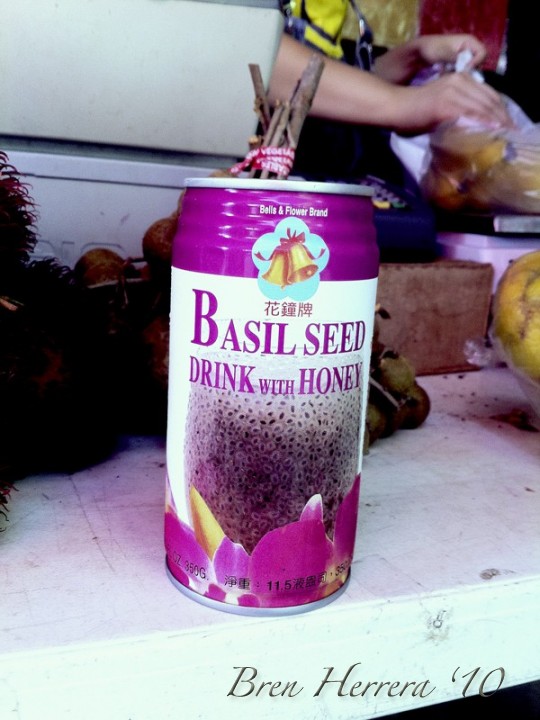 (thanks to my iPhone, I was able to take  picture of this drink to share on Twitter as I was sipping)

Lunch was interesting to say the least. Papi insisted on eating in the neighborhood which was cool, until I decided to choose the spot. I will leave details of the actual restaurant for a formal review in my Restaurant Review area, since we had at least 10 things off the menu. Needless to say, no one in the group was a fan of dim sum. Well, except for me and my 7 year old niece who was totally smitten with the spicy short ribs.

A discriminating palate is being developed. That’s the best thing we got out of Chinatown. Well that and the mere experience of walking through yet another American Chinatown.

On the bright side, dinners at our place were great, which I can’t wait to share with you including a Cuban-esque pineapple chicken recipe. On the bad side, eating out proved to be a major fail, which I’ll also share with you in the next recap of eating through Hawaii!

In the meantime, enjoy some of these flix I took while there.

1 year ago by Bren Herrera
﻿ A favorite steak sauce I created years ago and have modified several times makes it on this Father's Day segment with my good friends at Good Day Atlanta. Since most of us are still practicing social or physical distancing, staying in this weekend allo...