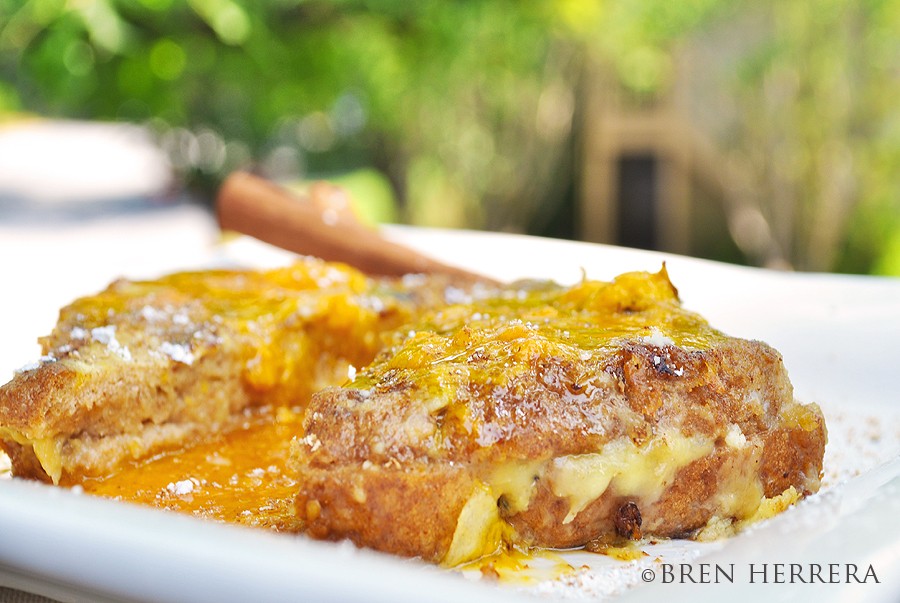 (rum spiced banana is what you see oozing out of the slice on the right!)

I suppose French toast is just French toast. Lots of eggs, some cinnamon, nutmeg, milk and butter… Oh and the bread of course. Nothing novel. Especially we if we carefully dust a pinch of confectioner’s sugar on top of the perfectly browned slice.

But, I love French toast in all its simplicity. It must be something about the end result: a buttery slice of bread, framed in eggs (which must always be cooked in butter) and a plate that exudes amazing aromas.

French toast is not a Latin staple. In fact, I’ve never heard of any one single family making it in their Latin country. For me that means French toast was super special in our home when I was a child. When my mother figured out what it was in the early 80s (probably through a Betty Crocker cookbook or an all Americana diner in Miami), it quickly became a breakfast must-have in our home.  My mother, being the creative energy and the master chef that taught me most of what I know today in cooking basics, used to invent and offer all 5 children a colorful variety of flavors of French toast (among other indescribable yumminess).

The combinations usually involved her favorite fruit–mango (see here to understand her love affair with mangoes), bananas (which my sister loves in bunches and can devour at least 4 a day) and peanut butter — that one ingredient my two younger brothers lived off and was the necessary base for every sandwich. 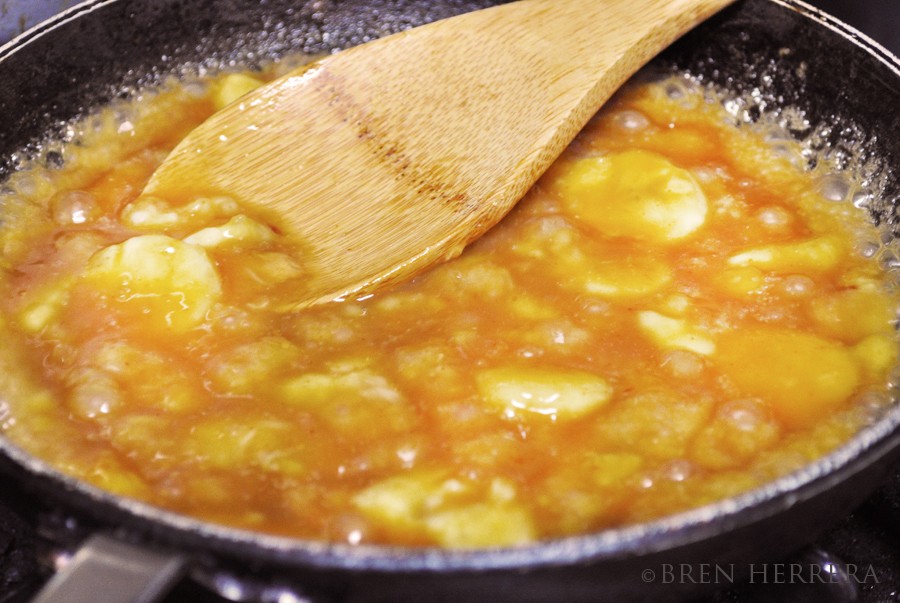 While this post is happening faster than I can get dressed (I’m talking less than 45 minutes start to finish), I was inspired at the 11th hour to participate in a contest I Can’t Believe It’s Not Butter is hosting called “ToastMaster.” The idea is to create a toast recipe using their product; one inspired by a memorable experience or a recipe you just love. I quickly went to my childhood and all those staples in our kitchen. I thought it’d be incredibly delicious and a great homage to my mom’s continued creativity and selflessness in always designing something special for us to enjoy by infusing all of those elements. She took an all American favorite and made it her own. Hence, I loved the idea of creating a Latin fusion version of an American classic  by incorporating flavors well-indulged on a daily basis as kids. 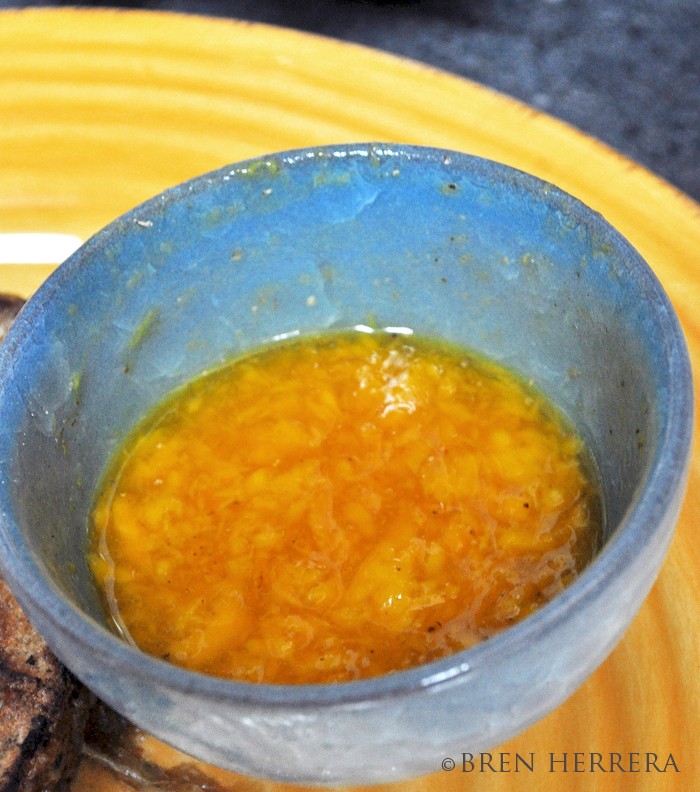 Not to mention that our entire family has switched to butter alternatives as away to support mami’s efforts in lowering her high cholesterol. She settled with ICBNIB long before I was even cooking professionally. Participating in this contest made all the perfect sense. Plus, it totally challenged my ability to whip something up in less than an hour, including plating, photographing and editing (see note below!)

All that aside, I still had to take my last minute creation over the top and really exhibit some Latin inspiration. I added a splash of rum in there, because after all I am Cuban and a Cuba Libre makes sense at any hour of the day in our culture (Rum and Coke). At least it does to Caribbean islanders bearing the hottest weather!

This came to me at 9 am and it’s done! And, I love it! I think you may already know the spiced rum banana mixture had a sparkle effect, but the mango maple syrup is what did it for me. It gave it that perfect touch of sweetness and texture against the perfectly toasted bread. If you are so ambitious to try it, please let me know! I’d love to hear what you think! 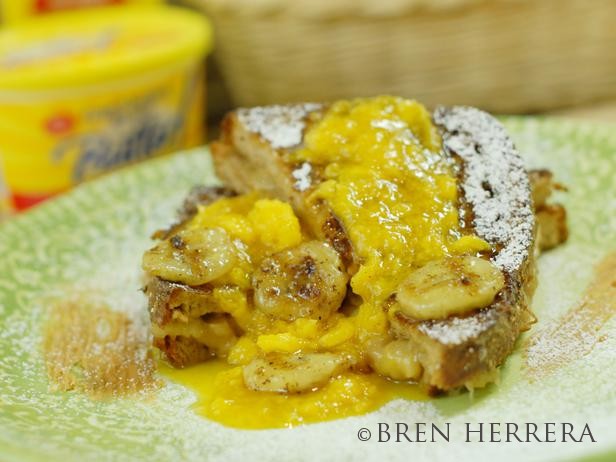 * This post and recipe are part of the requirements to be entered into the ToastMaster Ambassador contest. I have not been compensated for this post. All inspiration for the recipe was drawn from real life experiences! For me, that’s what cooking’s all about 🙂

* And because all of this happened in less than 45 minutes, I’m on my way to the kitchen to rephotograph it. Because it really was beautiful. I work under pressure, as always. Today just didn’t need to be that day! 🙂

In 8″ skillet, melt butter. Add bananas, peanut butter, rum, sugar and pinch of salt. You will get flames so be careful in handling your skillet. Bring to boil, breaking down the bananas using a wooden fork or spoon. Using same spoon, stir until bananas have cooked down and rum has infused. You want to end up with a semi-thick mixture with some chunkiness in the bananas. Set aside and cool.

Whisk eggs in medium bowl. Add milk, nutmeg and cinnamon. Combine well. Drench each slice of bread until fully covered in egg mixture. Using stovetop grill pan, melt 2 tbsp. of ICBNB and grill one slice of toast. Top first slice with banana mixture. Top with second slice and press down using a spatula. Cook on each side until bread is golden brown and egg is cooked through, approximately 4-5 minutes on each side.

Mash mango using fork until broken down but still a bit chunky.  Stir in maple syrup until both are well combined. You may add a pinch of cinnamon or nutmeg here.

Slice french toast diagonally. Pour mango syrup and dust with confectioner’s sugar and a dash more cinnamon! Taste the spiced banana while it oozes out!

8 months ago by Bren Herrera
﻿ A favorite steak sauce I created years ago and have modified several times makes it on this Father's Day segment with my good friends at Good Day Atlanta. Since most of us are still practicing social or physical distancing, staying in this weekend allo...