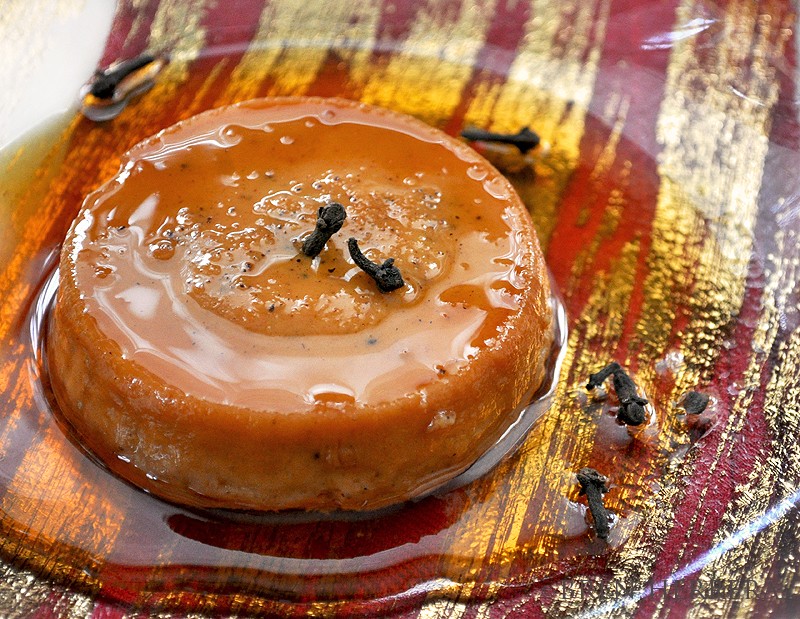 It’s #FlanFridays and you know what that means!! A new flavor to woo and get you all giddy about custards and, uhm, pressure cooking. I’ve neglected to talk about my affair with the cooker for a while now, and still will leave it for another post, because….

If you didn’t know, Valentine’s Day is on Monday. Yeah, that over-rated day where people share all kinds of love-y dove-y things and go all out purchasing material things what will be lost in memory come next Feb. 14th. I get it though and think it’s cute when two people can really step outside themselves and do something special for their S.O.

Since it is a day dedicated to expressing amor and affection, lots of love is in the air, mouths are watering and hearts are throbbing at the thought of what this romantic weekend holds.

I’ve mentioned in previous posts that I’m not that into Valentine’s Day. Sis and I call it S.A.D — Singles Awareness Day. Makes perfect sense, right?! All about self-love and adoration. Though I’m not the least bit sad about anything in my life, I do think about when I’ll get married (just this morning, mami was asking me when I was going to make her an abuela! Ha!). In the meantime, I consider myself a very happy single woman with suitors that like to entertain me. And a right-hand man that’s been my best friend since I’ve lived in Atlanta. It works lovely since my in and out of town schedule is so wacky. Nonetheless, I still am very aware of the things that are customary to  lovebird culture: Tons of chocolate, flowers, some bubbly, go out to eat and maybe if you’re lucky and a woman, a really pretty piece of jewelry from the guy (or shoes in my case!)

None of those thing really do it for any more. Well except the bubbly. Oh and exotic flowers. And, I do love chocolate, don’t get me wrong. But it’s so accessible every day that getting some on S.A.D is not my idea of showing me love. And eating out is great but the prix fixe menu’s I’ve seen in years past are so over the top and ridiculously underwhelming, I’d rather cook in my home and make what ever tickles my fancy–and his on a year there is one!  That being said, I really enjoy  putting energy into creating special meals I’d not usually make, like the rose and strawberry risotto with oysters, to show my love and affection for friends and family.

Since I got the main dish out of the way and figured out (assuming I’m going to cook for anyone this year), it makes perfect sense to make a flan that two would enjoy and really incite sensual emotion. Everyone eats something decadent on Valentine’s, right?

Last week I made a chocolate ginger flan that was to.die.for. Seriously. But, it was not cooperating for a really good picture so I just ate it and quickly got over my irritation with the screw up. I’ll make it again and share cuz it was that good! 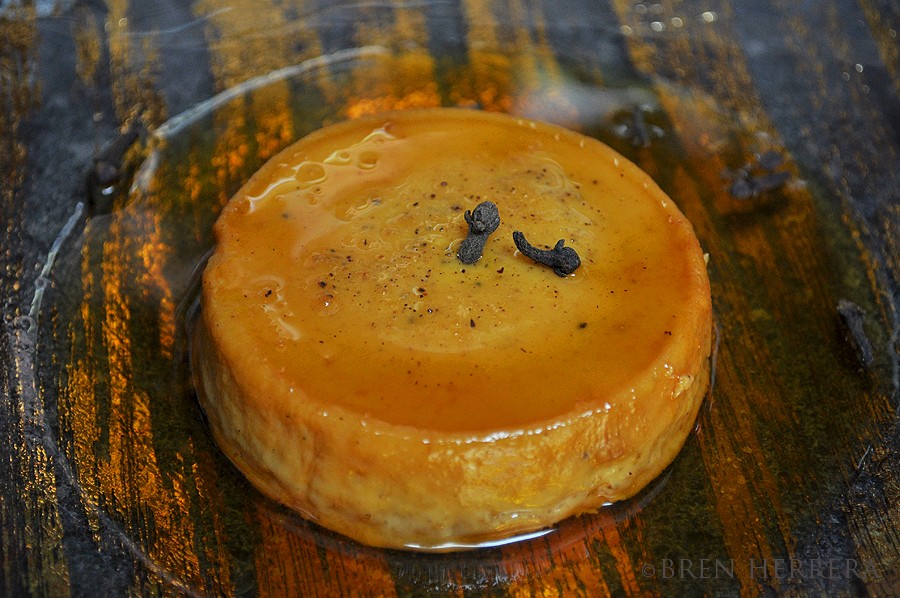 Well, I loved the ginger in that one so damn much I wanted to take a stab at it again.  Only this time I wanted to use  something to knock me out! I was over the chocolate thing. I wanted something absolutely delectable, heartwarming and throat-clenching! Yes, some alcohol. I’ll be honest, I was inspired to use some liquor this week because it’s V-day and many of us will be sipping on sort of libation.  So I cheerfully pulled out a bottle of rum my friends over at Cruzan sent me to taste. This isn’t any kind of rum, though! This is their new variation which is, get this, a 9-spice rum infused with notes of  vanilla, cinnamon, cardamon, cloves, allspice, nutmeg and a few other noticeable spices. How genius was it to make a spiced rum flan with grated ginger in it? Score!

You may be thinking what is so special about a 9-spice rum–rum is rum is rum is rum. This one has all those aromatic spices I love to use in food, especially in the winter (because it’s still cold down here and it won’t let up)–kicks dishes, especially desserts, up a notch or two. Plus, the rum tastes great with Coke–tried that last week while having an argument with my ‘puter.

So, naturally,  when I added it to the custard mix and then gave it an extra punch by pouring a bit more over the finished dessert, it was heavenly! And divine. And luscious. And gorgeous. And sexy. 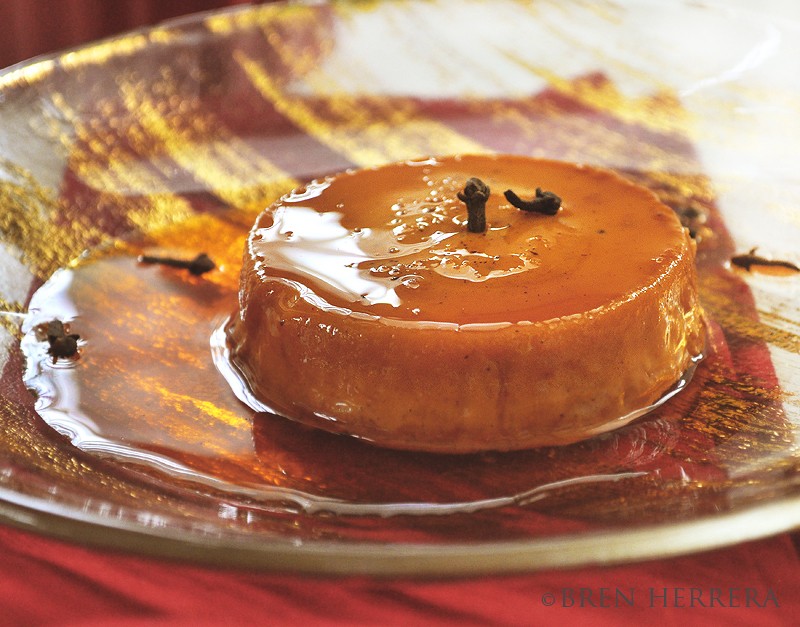 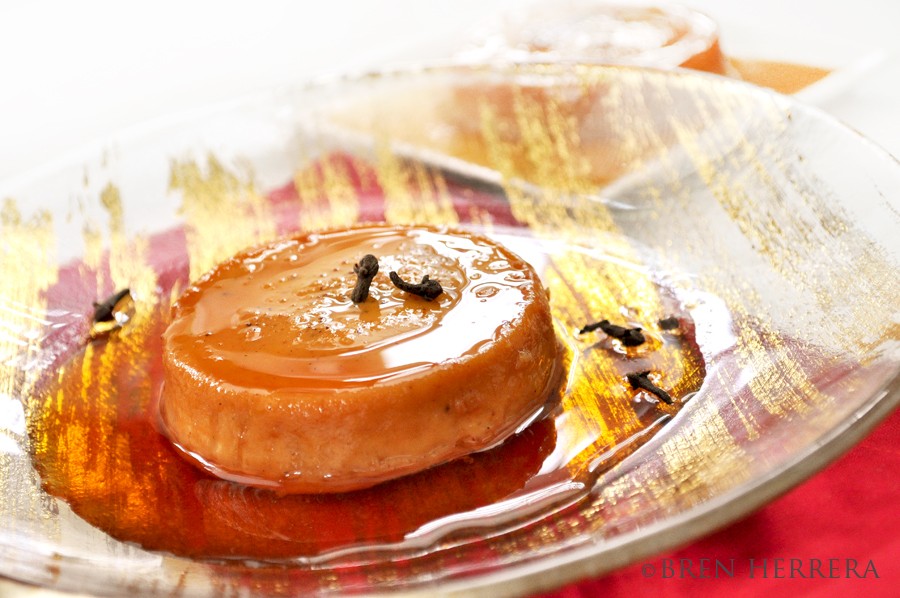 Everything I need a dessert to be right now.

If you’ve played with making flan before, I implore you to make this one for your booboo or sweetheart this weekend. You’ll be sure to hook them in and have them lusting over you (after the dessert of course)! If there’s no sweetheart this year, that’s totally cool, treat yourself to this lusciousness, because after all, you got to love yourself first! Yes, it’ll require you buy some of this fab rum, but you’ll love it. If you’ve not made flan, you just might fall in love with this latin dessert if you try this flavor first, especially if you can’t stay away from spices and ginger like me. They’re like a little marriage made in foodie heaven. Sorry, just had to!

Have a great and lovely V-day and eat everything your heart desires!

Whisk egg in a medium sized bowl. Add and combine sweetened condensed & 2% milk, rum & desired spice. Set aside. Add sugar to an 8″ non-stick skillet and caramelize on medium-high heat until it is golden color, stirring constantly. Make sure not to burn sugar.  When sugar is fully melted down, carefully pour half into one ramekin and remaining into the other and coat  entire sides (I suggest using a brush if you are not experienced in handling extremely hot caramel). Sprinkle a pinch of desired spice in each ramekin. Add mixture to each ramekin and cover  with aluminum foil.

Add 2 cups of water to a 4 or 6 qt. pressure cooker. Gently place ramekins in cooker and close lid. Place jiggler on lid. If your pressure cooker jiggler has different PSI settings, set it to 10. Cook on high for 6 minutes, or until pressure cooker starts hissing. Turn off heat and allow all of the pressure to release itself, or for another 2 minutes.

Remove from pressure cooker after all pressure is released. Refrigerate for 8-9 hours or overnight for best taste. Remove from refrigeration 30-45 minutes before serving to loosen some. To serve, using a butter knife, loosen the sides of the flan all the way around. Take a large plate, place upside down on top of flan and flip! Be careful not to waste any of the caramel sauce. Pour 1 cap full of rum on each serving and garnish with a pinch of desired spice.