A Lesson in Pressure Cooking 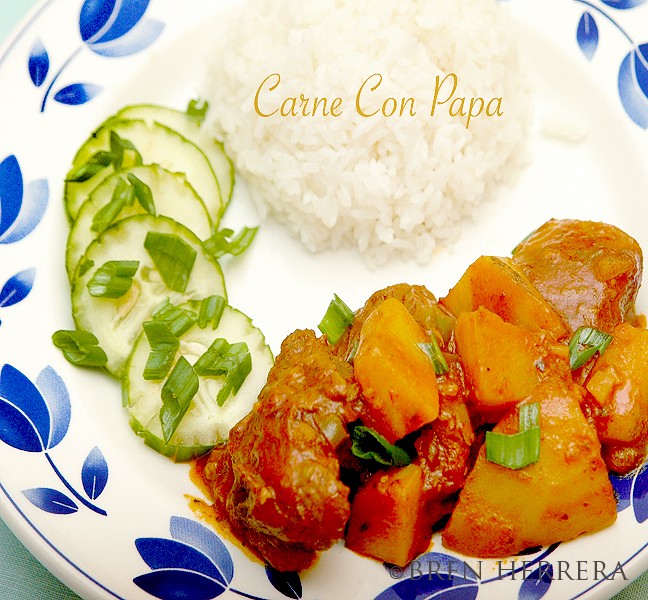 THIS IS A LONG POST. MOSTLY INSTRUCTIONAL. DEFINITELY SOME FOOD. ALWAYS A STORY.

That 2nd batch of my super crazy 10 days is almost over! 4 more and I think I’ll be able to lay down and watch a movie and maybe even ask a friend to take ME out to dinner. After all, I’ve been doing a ridiculous amount of cooking recently.

But for a good cause. Cookbook cooking, family cooking, friend’s cooking and then just cooking because I’m too broke right now to go out and finance the meal I really deserve (like getting on a jet and flying to my favorite spot in Paris…though Miami would do too–and no, not Cuban food!).

On the last day of shooting last week, I got a bit bored and decided that my next post would be about pressure cooking. It wasn’t so random as much as it was because I had just finished making dinner. In the pressure cooker. And that wasn’t because I wanted to as much as it was because my photographer was in a hurry and needed to fight traffic back into Maryland to pick up his children. My mother, whose hand was still under wraps from surgery, will always ensure D is fully satisfied. You see, his services don’t stop at just hooking me up with any photography and graphic design I need–my mom pimps him for all kinds of work too. Somehow my brothers haven’t gotten to him. And my sis’s 30th b-day is coming up which will require a full out photo shoot of her bad a** body.

I understand my mother so well. She’s trying to keep him very satisfied. And feeding D is the way to do it.

Pressure cooking is something I’ve seen my entire life. My mother swears by it. When we were younger, she never allowed us in the kitchen when she used it, which was at least every other day. It does have its risks and has even exploded in our kitchen once. Fortunately, no one got hurt, though black beans splattered all over ceiling. I remember it clearly. It was like black soupy poop was intentionally thrown up there (I have a real story about black soupy poop that will crack you up–but later for that).

That God awful accident didn’t scare me. She eventually let me try it and gifted me my first olla de presion about 6 years ago. I’m hooked. Since then, I’ve collected two more pressure cookers and I love every single one of them. Mine are all PRESTO brand vintage so they don’t have the safety features the newer models come with. The comparison is having a rear camera in your new Lexus truck or NOT!

So what is a pressure cooker? And why do I use one!? Well, for one they save me TIME! Secondly, they make me feel like the real deal in the kitchen! I mean come on, how many woman under 30 do you know that use these monsters, regularly!??! Right! And then of course they have the same purpose of any other kitchen pot and generally don’t look too different. However, their lids are far more elaborate and make for highly efficient cooking. The lid and its components (a rubber ring) cause the pot to completely seal, not allowing any water/steam to evaporate. When the water reaches its boiling point, the steam pressurizes. What you end up with is higher cooking temps. and much much shorter cooking times. For example, black beans in a traditional pot (without overnite soaking) would take about 3-4 hours. In the pressure cooker, it has taken me no longer than an hour, at the absolute most. Steaks, meats, potatoes and other foods take less than 1/2 the standard cooking time. I love that. For that reason alone I really enjoy using the pressure cooker. Not to mention, in my opinion, the flavors really penetrate the food much better.

An excerpt from an informative site on pressure cooking:

“ The pressure of the trapped steam can be measured in pound of force per square inch or PSI. You will often find this term in pressure cooking recipes. It refers to how many pounds of pressure per square inch you will be cooking with. Don’t worry if this sounds very technical. The instructions that came with your pressure cooker will tell you how to read the PSI.

Most accidents from using pressure cookers are a result of user error; I. opening lid without all the pressure being released; II. releasing pressure by messing with the toggle/valve in an erroneous manner and causing it to explode off. There are other ways to dangerously use the old school cookers, but new ones are fully equipped with safety measures. Though I don’t own a modern 0lla I know most come with more than one valve and will automatically release pressure. And some won’t even open until the pressure is released to 0 PSI. Older models also make a really loud hissing noise that serves and an annoying announcement that your pressure has been reached– you might want to check it at that point. Depending on what I’m cooking, I’ll either lower the heat or be brave enough to tilt the valve so that pressure starts to be released. When all the pressure is released, I’ll carefully open the lid to check the water or liquid level. Sometimes, I’ll turn off the stove and remove the pressure cooker altogether. It just depends.

The pictures below depict two of my mothers’ vintage Presto pressure cookers (she’s had them for about 30 years) and the shinier one is my cousin’s. Hers is a modern one with the safety valve not seen on my mother’s. I’ve yet to use a new one. I shall try soon enough at the Cook’s Warehouse for my first cooking lesson. 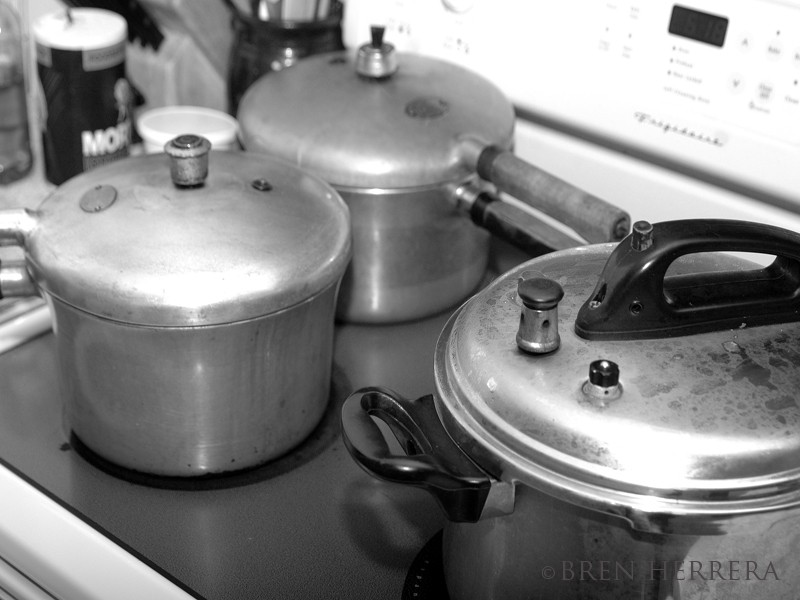 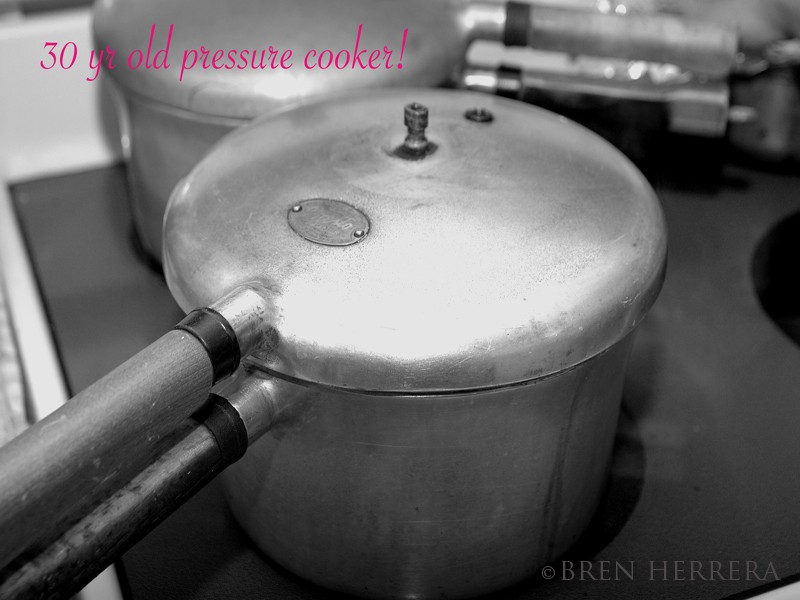 When cooking with my pressure cooker, I don’t leave the kitchen. I like to keep a controlled environment. I think I’m a control freak. J might tell you that. Once, I was soooo tired, I did take a nap as soon as I closed the lid. I was in my bedroom and could hear when it got to that hissing point, which only takes about 15 minutes when heat is on high. I was sleeping with one eye open, one closed. But, I was far enough that I had fully gone into la la land and something had happened, I would have successfully avoided a physical catastrophe to my fine, 20-something year old ?????? (okay, kidding. Chelsea is visiting these days)

Nowadays, I feel a bit more comfortable allowing my guests in the kitchen when I’m cooking. For the most part, I try and keep them away. I don’t have renter’s insurance so I don’t want to responsible for torching someone’s eye or the like. Can you imagine that!!?! YIKES!

Anyway, like I mentioned a long time ago, way at the beginning of this ridiculously long (is all this necessary? I sure hope you’re learning something) post, I cooked carne con papa last week at my parents’ house. Well, my mom really did the cooking, I just helped with a lot of the prepping and monitored the whole process. And, just last night, I made carne ripida or ropa vieja. English please. Pulled flank steak, people. I made this super savory traditional Criollo Cuban dish for 3piece and her kids. The process for cooking this excellent and high grade beef ($12.00/1.5 lb.) is about the same as the carne con papa and I love that I cook it in 30 minutes and not 90. A girl’s got other things to do.

The recipe for carne con papa will follow on Thursday. As well as a list of foods you can prepare in the cooker. And pictures of my own pressure cookers. I promise. I share here a picture of the end result but this post is now about 5 pages long and I don’t want to bore you anymore. Please come back on Thursday and the full recipe will be available! HAPPY EATIN’ until then!

0 thoughts on “A Lesson in Pressure Cooking”