Being part of a gourmet cooking club has its pluses and minuses. It’s great in that you explore wonderful new themes and ingredients and are charged with creating something unique based around that theme. It’s also wonderful in that you get to virtually meet new people (though we all know each other now!) and are oft-time inspired by their work.

The flip side? Deadlines. I’m usually good about submitting work I’ve committed to doing on time, but this month has been one hell of a challenging one. I need some serious retail therapy. Like serious. Perhaps even an intervention. Refer to previous post for an explanation.

That said, this month’s creative assignment from Natasha and Lazarus (mi compadre en Miami) of the monthly 5 Star Makeover, was pizza. Any kind of pizza. My initial thought was: boooooring. Really? Really? Pizza? Like some bread and toppings baked in the oven, pizza?

I suppose I was underwhelmed with the idea because pizza is my “It’s 1 in the morning and I’m starving” food. Not a good look the next day. And, last time I had some, I was in L.A. at an authentic Italian trattoria and yet again I was not impressed. Furthermore, I’ve not made pizza since the last time I saw an old blogging buddy who’s kinda disappeared. Now that pizza was smokin’ good. Don put his foot in it, as they say.

Not to mention, there’s nothing like having pizza in Italy. I swear. It may be a cliché, but it’s one of the best things I’ve had in the form of a pie. I specifically remember having a Margherita in Rome and being blown away, thinking, “sheesh, we Americans have it all wrong.”

Those thoughts of traveling through Italy, speaking Italian, and trying such incredible food on just about every corner, inspired me to make this pizza happen! Am I late, yes! But time escaped me and I couldn’t get my ingredients in time.

Nonetheless, here it is.

While debating what I was going to make, my approach was simple: consider what’s in season, what’s in my fridge and pantry and what would make for something my parent’s would seriously enjoy.

Finally, it was more or less a a decision based on obsession. I’ve had obsessions as of late (another referral to this previous post). I’ve been craving truffles, among other things. That obsession is hyperactive because of the recounts of a trufa fest I went to earlier in the year and one which I’m featuring here on the blog.

And then there are figs. I didn’t grow up eating figs. They have nothing to do with our cuisine. The most I’ve even known about figs, were those faux Fig Newton cookies I used to wolf down like my espresso; until I started cooking professionally that is. Those lil’ cookies were one of the best treats my mom used to put in our lunch box, I swear.

Ultimately, when I decided what my pizza was going to be like, I was inspired by those things: travel ‘scapes and childhood. As for the figs, they’ve been in full bloom and several friends have teased me on Twitter by describing how beautiful their bloom was. When I asked for some, they were out! Suuuure! Go figure. My last two weeks have been a deal of relentless securing of figs from the farmers’ market next door to me, but they were like “huh? What are figs?” Two other stores were out and while I hate to admit, I resigned to good ol’ sundried figs.

Sucks, I know. But I was determined to get this pizza done.

My initial thought was to use Manchego cheese, seeing as though it’s another obsession I have. And one in which I only entertain when I’m in DC. Mami and I can go through a vast block in a matter of days. I thought long and and hard of my ingredients and how they’d all work in symphony…

Truffles are potent in aroma. Figs are super sweet, especially when sundried and packaged up. Manchego makes its presence known, making no apology for its overpowering bite. Those specific three, plus sage, because I needed something green on my tomatoless pie, was not going to work so well.

Ricotta it was. My least favorite of cheeses. Can you even believe it!!? It is the single reason why I pay no mind to the layered pasta, ie, lasagna.

I made my dough, a first in a long time as well (plus I had to redeem myself considering I wasn’t using fresh figs and my truffle stash was nicely tucked away in my freezer–sacrilege, no?) and started arranging my pretty pie.

Pretty it was! But more importantly, it was divine and rustically beautiful. It was sexy. It was decadent, over-the-top aromatic and enjoyed a perfect combination of flavors. It had the right level of sweetness balanced with savory components. And, surprisingly, I loved the ricotta! What a score!

In love, may I say. I have new found love for pizza. Yes, it may just be a slate bread with your toppings of choice, but it sure is a feel good food and at the end of the day, you can make it as heavy or as light as you want.

Pat on the back. I’ll be making this one again. Next time inspired by the ensuing fall harvest! 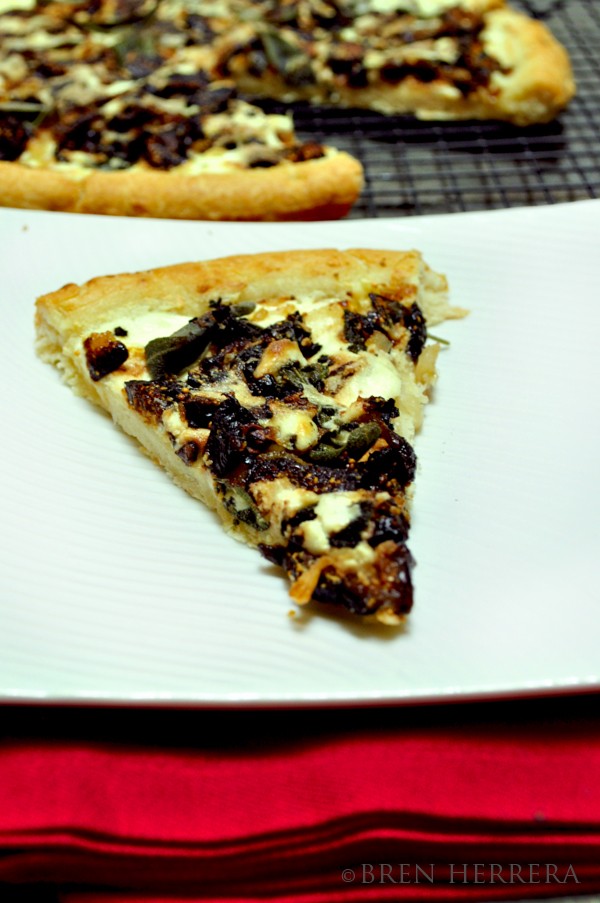 Roll out pizza dough until you have a nice round and even pie. Pinch your crust to desired thickness. Preheat oven to 400 degrees. Bake dough for 5-6 minutes. Remove from oven and place on cooling rack. In large skillet, heat olive oil and sweat onions  and shallots, adding figs, 1 tbsp. minced sage and salt before onions are fully translucent. Cook until figs are softened, approximately 3-4 minutes. Remove from heat. Using pastry brush, cover edges and base with truffle oil. Evenly spread one cup ricotta cheese on crust. Spread onion and fig mixture to pizza. Evenly sprinkle truffles and arrange remaining full sage leaves. Using small rubber spatula, spread remaining ricotta on top. Bake pizza for 8-10 minutes or until desired toasty crust is achieved and dough is fully cooked.