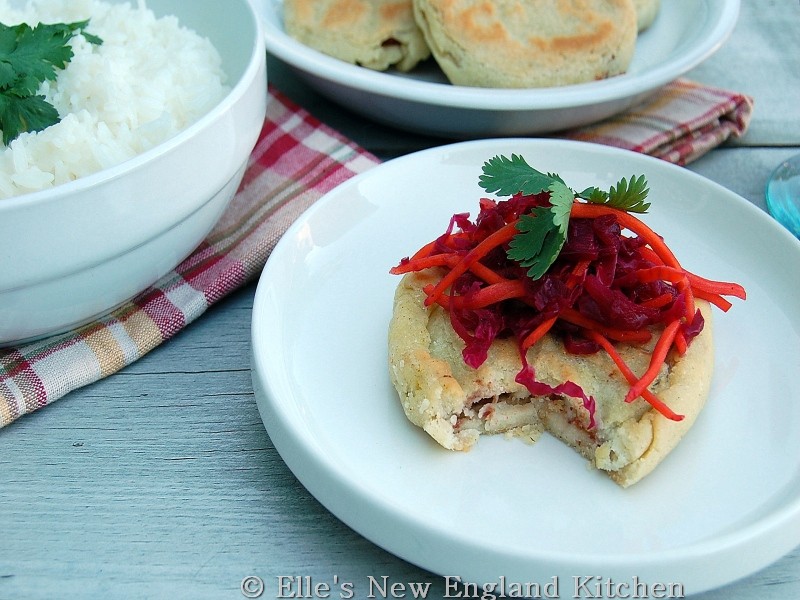 Hey friends! I can hardly believe it’s been one full week since I’ve posted a new delicious or totally verbose story about my whereabouts. All for great reason which I’ll entertain next week. Just know that I’m so, so, thrilled to kick off this week with Hispanic Heritage Month. My way of celebrating this culturally diverse and exploratory  initiative comes by way of sharing food from Latin America, not just Cuba. There are amazing cuisines throughout the Americas and this is the perfect time to highlight some of them. I did this feature last year to much success and was excited about doing it again. All week we’ll have a different food blogger, Latina or not, share an authentic recipe that’s dear to them. Hopefully you’ll love it as much as we do and be enticed to try it for yourselves!

First up is Elle of the colorful and really diverse blog, Elle’s New England Kitchen. I first *met* Elle (I just love her name!) when I started this blog back in 2008. Crazy to think it’s going on 5 years. Over time, we’ve grown to adore each other and our respective work and on and offline.  She lives in New England as her blog suggests and loves to create recipes that are typical of the region. My favorite: Argentine Style Burgers. I love how Elle loves to play with Latin flavors. But, that always intrigued me. Her use of Latin flavors, like adobe, was intense and seemed unusual for an Americana living in New Hampshire. I finally found out and it all clicked. There’s a good and delicious explanation! Read below as she helps me kick off Hispanic Heritage Month with a really good treat I love to eat year-round! Let’s welcome Elle to Flanboyant Eats  And, hola Elle’s readers! B-

Hello, everyone! When Bren asked me to do a guest post for Hispanic Heritage Month, I jumped at the chance. I said yes for two reasons. One, Bren is a sweetheart, so how could I say no? Two, my husband is Latino. His mom came to the US from Honduras when she was 18. Me? Not so much. My roots are in Europe–specifically Ireland, Scotland and Germany. Maybe a bit in France, too.

My mother-in-law grew up on a very large plantation in Honduras. She didn’t have to do any cooking because they had servants for that, and as a result, she doesn’t have many family recipes. In fact, I don’t think she’s much of a fan of cooking at all. Plus, finding Honduran recipes online is near impossible! Thank goodness Goya has a cookbook devoted to Central America. I gave it to my husband and he chose some recipes for us to try, including today’s recipe for Salvadoran Pupusas. He remembers having these when he was a kid, so we decided to try these first. 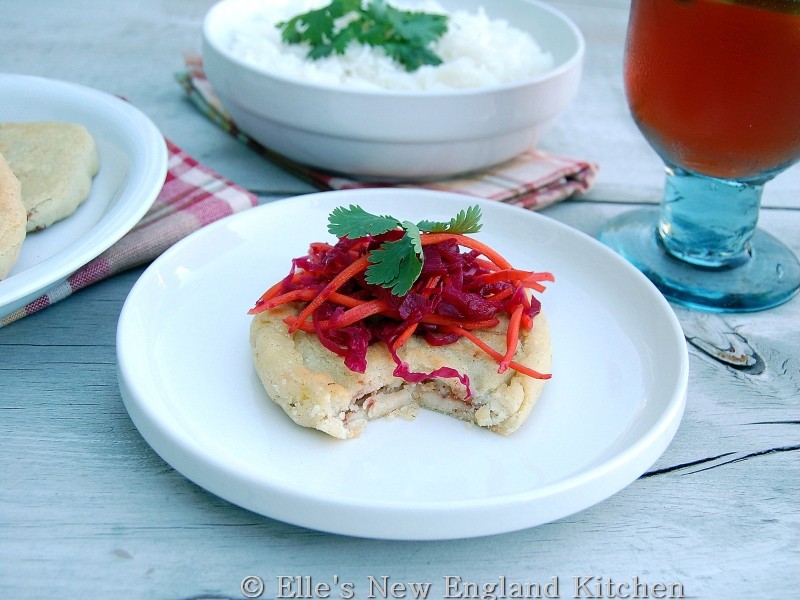 CHECK BACK TOMORROW FOR A NEW FEATURED BLOGGER AND RECIPE  INSPIRED BY LATIN AMERICA!

*This is part of an annual Hispanic Heritage Month food series, now in its 2nd year. Catch up on this years and previous delicious features:

{ALL AROUND LATIN AMERICA} FOOD SERIES

How do you celebrate this culturally inspiring month?

Makes about 8
Slightly adapted from Goya

In a medium bowl, combine the masarica, adobo and 2 cups of the water. Mix until the water is absorbed. Add the rest of the water a little at a time until you have a moist dough. You probably won’t need all of the water.

Take 3 tbsp of the dough and form a circle, roughly 5 inches across and ⅛ of an inch thick.. We did this by putting the dough inside a small Ziploc bag that had been oiled. (Just cut the sides of the bag open, leaving the bottom edge intact.) Put the dough inside the bag and press, either with a tortilla press, your hands, or a rolling pin.

Spread 1-2 tbsp of the refried beans over the dough circle, sprinkle with adobo, and some of the crumbled cheese. Cover that with a slightly smaller pressed dough circle and crimp the bottom edges up over the top and seal. Continue until you’ve used all of the dough.

In a skillet over medium-med. high heat, add enough oil to just coat the bottom of the pan. Fry your pupusas for about 6-8 minutes per side, or until nicely golden brown.
Serve warm with a simple pickled cabbage salad, or simply with toppings like salsa and sour cream. We thought these would be fabulous with a little seasoned ground beef or shredded chicken tucked inside, also. Maybe smaller sized for party food!