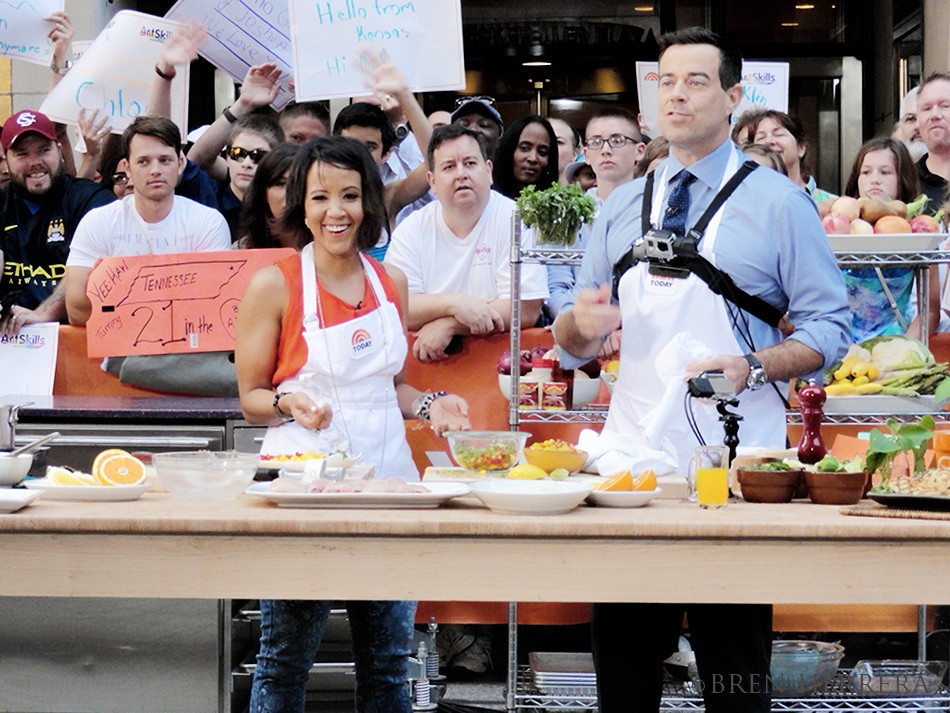 I mean, how cute is he?! Can’t you tell from my grin and lazy eye that I was enjoying every second of cooking with Carson Daly? I thought my excitement would have simmered down by now but I finally just had a chance to watch the broadcast segment and that reopened the bottled up emotion of having spent an incredibly amazing hour in NY last Wednesday. I’ve been overwhelmed by the beautiful response my friends from all over have been giving me on social media. My childhood friends aside (who came out of the woods) my church friends, blogging friends, culinary colleagues, and even some friends over seas as far as Australia and Thailand, spread some serious love all over Facebook, Twitter, and some on Instagram to the point my cell crashed at 7:55 am. So, while trying to thank everyone one-by-one (which is still impossible), enjoying the massive amounts of screen shots shared on FB, and catching up on work I missed, I didn’t have the time to sit at my desk to review the pictures my parents took and craft this post. But here I am, on a lovely late Monday afternoon, still on a high from cooking on the TODAY show Plaza for their Fresh Cooks Live summer grilling series which happened all last week.

And I had a blast. 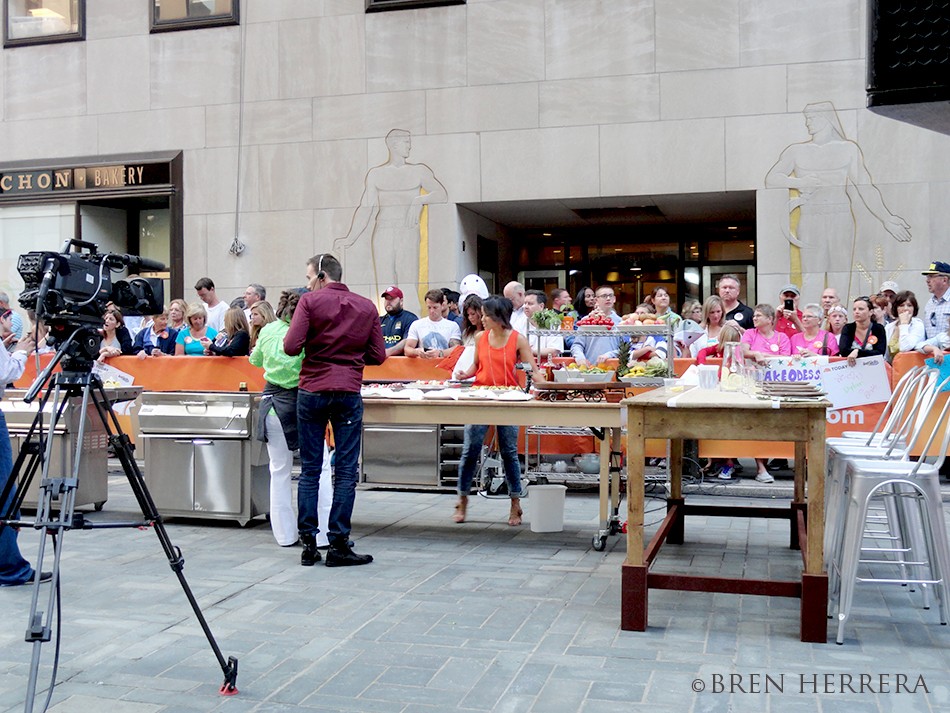 Others whom have cooked on the best morning show (ever!! — my friend Simone and I used to have catch-up viewing parties on the weekend when I lived in Atlanta) may not have made such a big to do about the moment. After all, it turns out be another day of work. But for me, it’s so much more than just having cooked alongside Carson and watching Al Roker, Matt Lauer and the pretty ladies Savannah and my fave Natalie enjoy my food — it’s much ado about a little 7- year old dream that has finally realized and it was 20x better than I could have expected!

And it’s not because I’ve been a die-hard NBC/peacock fan from the soap operas when I used to watch them to their dramas or because I’ve been an obsessive, gluttonous TODAY show viewer and fan since I was in high school even before Katie Couric was at the helm and sitting at her desk where her legs were much the public piece of conversation or because I’ve been following Carson’s career since he hosted TRL (and I thanked the tv gods when they switched up the format of his late night show), or because I’ve always wondered what Studio 1A really looks like….

It has everything to do with the magic behind the cameras that makes us tune in for hours every morning: the staff and crew.

No wonder the anchors always look good, happy, and genuinely seem to love their jobs! I mean, there is some killer passion behind that working bunch. Between the food stylists, the culinary director (who is a charming, charming lady), the camera crew, the cooks, and the producers (so on point and diligent), being present at NBC and being “inside” the Plaza was akin to having the best colleagues at the best job.

Every one was over-the-top friendly but with a candid and professional demeanor. Yes, I was on the Today show, but yes they also made me feel like those 30 minutes or so I was on between the live streaming online and the actual broadcast segment, were all about my food. They extended themselves to me in the way we all should treat each other — with kindness and generosity. I’m not even lying to you.

Even the gentleman who put on my apron (so glad I wore that thing!!) was ever so graceful. 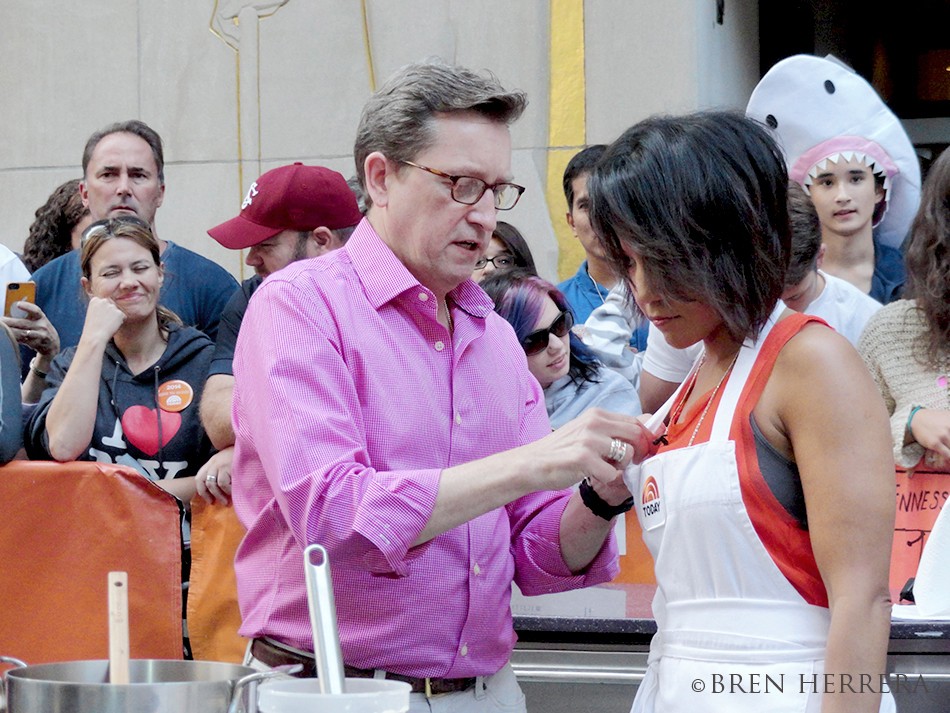 And they made my food look ridiculously good! I’m not sure what you saw on the screen, but everything was perfectly bright and fresh and plump and the Plaza just smelled like a good, down home cook out!

This girl can get used to having that kind of help all the time. Let’s be honest. Grinding it out alone is no joke… as I think about the 150-head baby shower I just cooked for this past weekend. 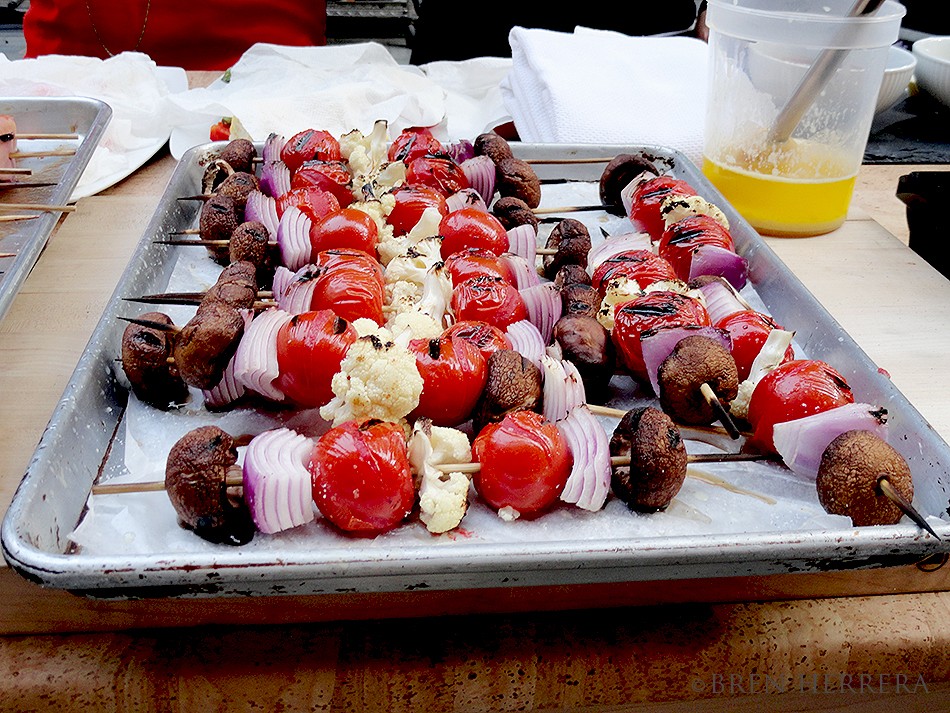 But the real, real fun part was just cooking. Simply cooking. Talking up grilling options for the summer was the perfect theme for that platform. Not to mention Carson is the coolest cat you’ll meet and makes work easy. Talk about super laid back, charming and just fun. Outright golden for having a good time. Grilled skewers have never been so pretty and yummy, I swear. And our chicken, well, let’s just say his got a good home-style beat down. But I guarantee it was tender and juicy! 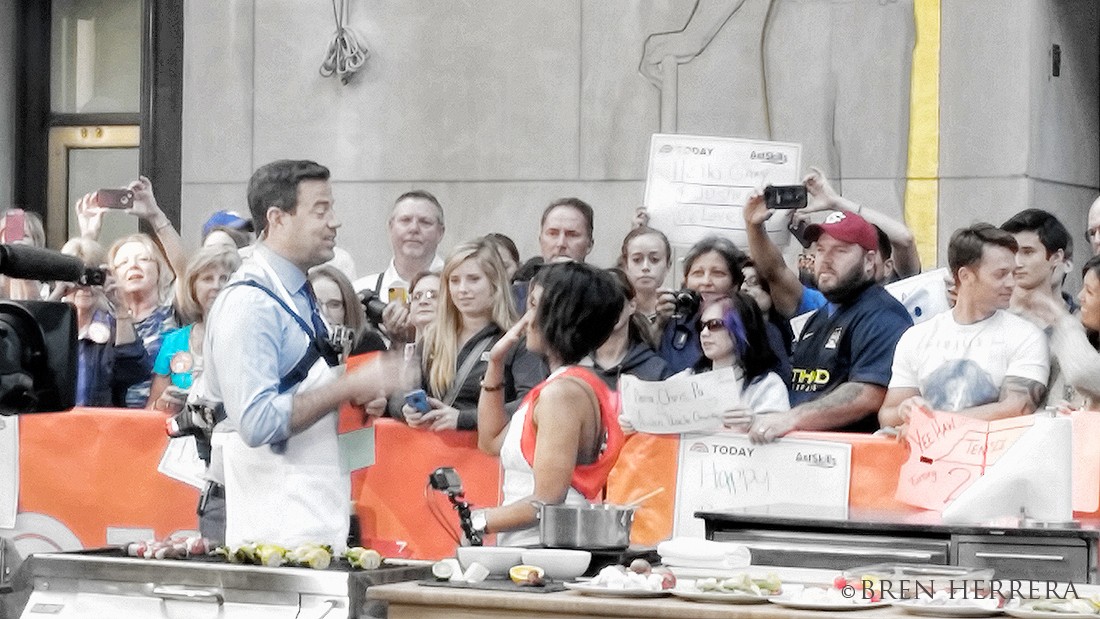 The whole morning was enigmatic. The ebb and flow of energy was minimal which is great, but my heart was pounding every second. I think. The sheer excitement took over. Why even pretend. Everything happened so fast I don’t even remember the online segment being longer than 5 minutes. I hear it was more like 18. I’ve not seen that yet. But I blinked and it was done.

Yes, I’m blessed to do this for a living and go on TV here and there to cook it up, but there’s something wildly different and special about the Today show. I don’t know… maybe I’m biased because I love the show to the point I’ve been ultra late to work (back in my corporate days) because I couldn’t miss a performance; or a “Today Throws a Wedding!” (remember those!) and I couldn’t believe I was actually there as a guest.

I stood behind my work station a few seconds before we went live online and stared up, watching the American flags wave aggressively. The morning wind was pretty fierce. I was really at Rock Center, standing on the Plaza, getting ready to cook in front of 5 million people.

Oh. wow. I choked up in gratitude for all of 7 seconds before I checked myself and put my game face on. I looked at my parents one last time before I tuned everyone and everything out. 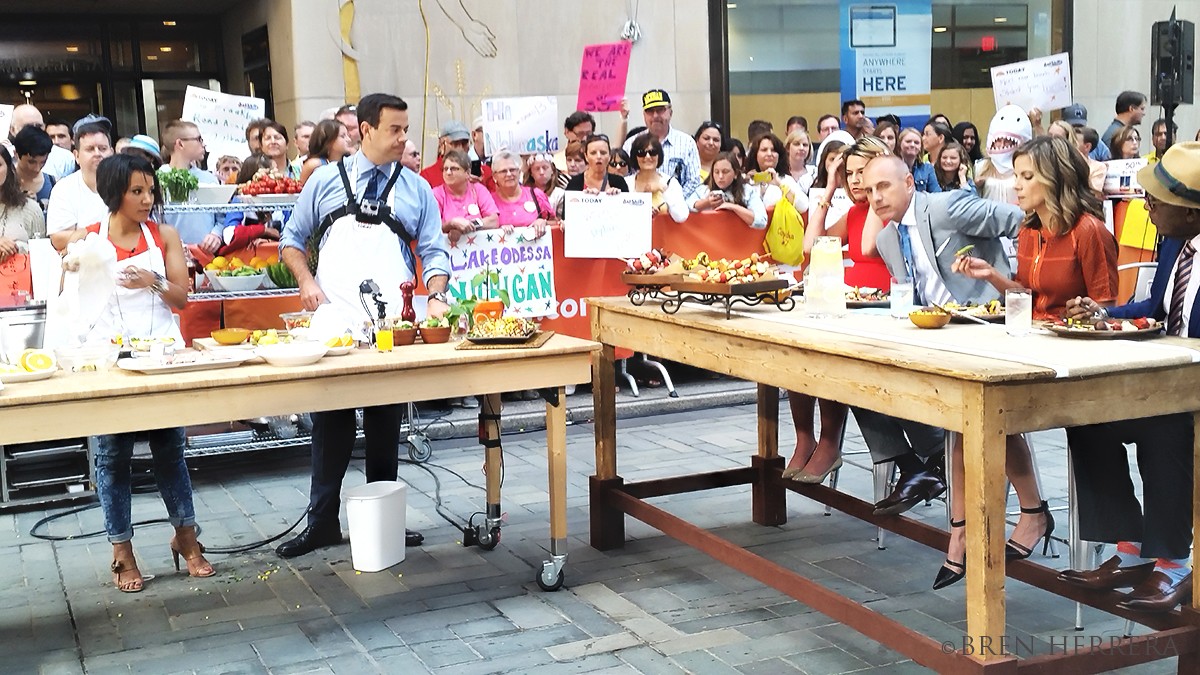 And then we cooked! We skewered veggies, fruits, and talked glazes and marinades; we made a mess, splashed citrus mojo all over the grill, grabbed a bowl because for a split moment I forgot my tools were behind me, used our hands to mix a delish relish, laughed, asked and answered questions,  heard Matt tell a crowd guest “Yes, it’s scrumptious, but we can’t serve you any. Sorry!,” and enjoyed Al’s affirmation that it’s quite awesome to rub more than enough garlic on everything.

Yup. I think they liked my food. 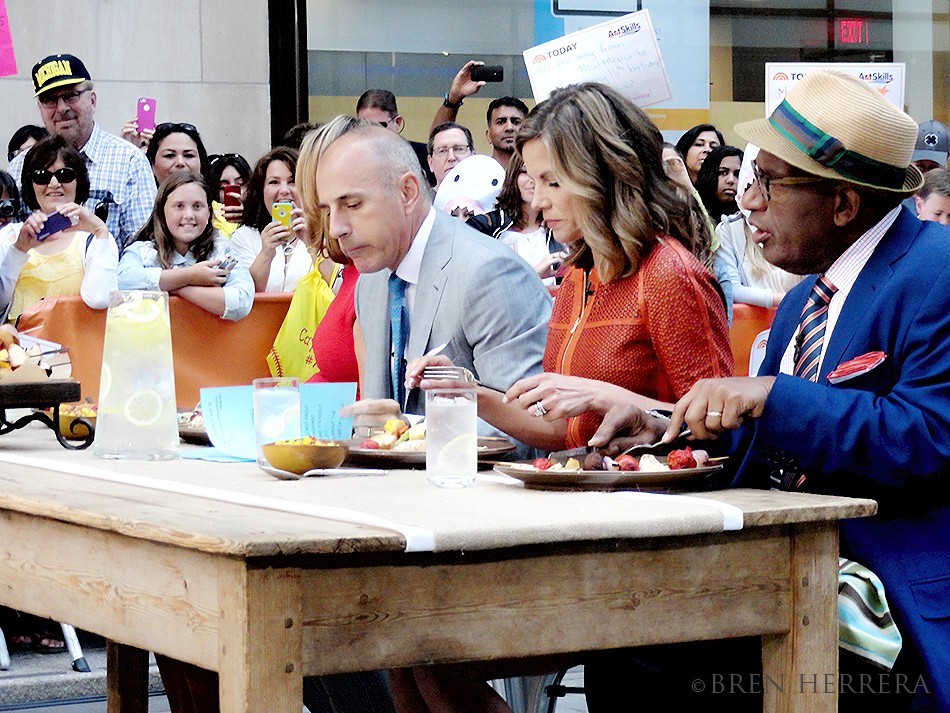 Life and work go on as usual, but I’m happy to see what hard work and passion can do.

On June 27th I wrote this blog post and 11 days later was invited on. No plan, no strategy, no method, no inside contact, no nada. Just a hard-working girl with big dreams, huge passion and unshakeable faith. And some amazing parents who support me unconditionally.

I mean, isn’t it everyone’s small dream to be on the TODAY show?  I’m so humbled by that brief but big moment. 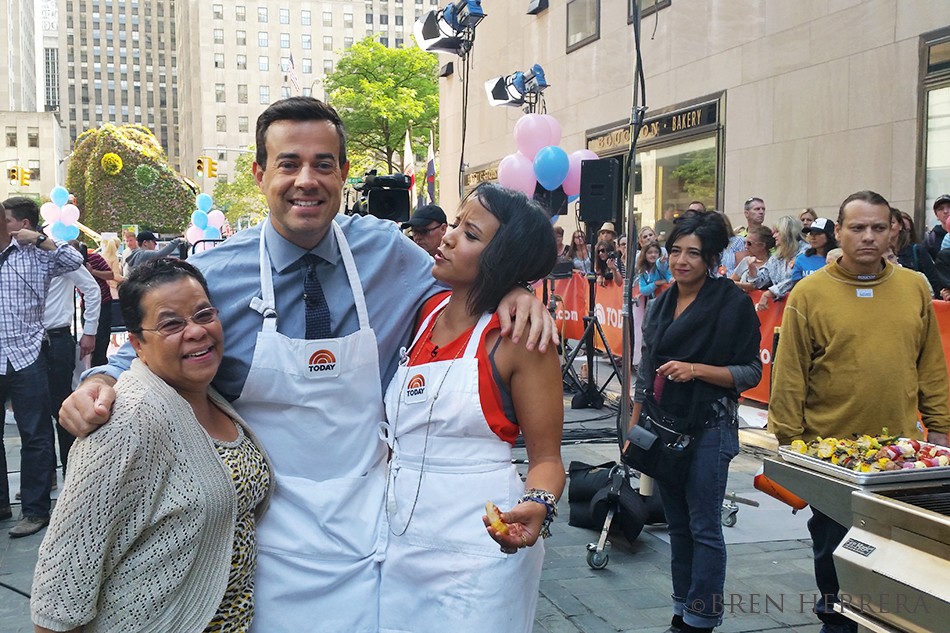 If you missed the segments, enjoy both the online streaming which was way more casual and gives you a fun behind-the-scenes look with a real time,  interactive angle from Carson’s chest cam and then the broadcast when we hooked up some mojo-infused chicken with mango and jalapeño relish! I hope you enjoy as much as I had fun!

The recipes are on TODAY’s website, but I’ll share a separate post later this week with the my pictures as I cooked everything at home first with the recipes as well.

Until the next one… enjoy some pictures my dream team, AKA Mami and Papi, took during the entire morning.

July 30th was pretty darn awesome. Thanks, NBC and the Today show.

* The quality of the pictures are not so great, so I do apologize. It was mad windy and my dear parents were zooming in as much as they could from their cell phones and iPad… And you already know that creates some serious grain!

8 months ago by Bren Herrera
﻿ A favorite steak sauce I created years ago and have modified several times makes it on this Father's Day segment with my good friends at Good Day Atlanta. Since most of us are still practicing social or physical distancing, staying in this weekend allo...