This is an emotional post. It requires attention to detail and understanding of culinary growth.

I  hate beets. Really, I do. As a child, Mami used to juice for the 5 of us and force two glasses of the unbearable concoction before ordering us off to school. I swallowed with much resistance and talked to myself, remembering that my telephone chat allowance weighed heavily on my sips.

There has to be truth to the idea of being repulsed by something due to an early traumatic experience. Clearly that was the case with me and beets. I thought the same would be true for eggplant, as I vividly remember one Sabbath afternoon, while in the company of friends, pitching a fit because the eggplant lasagna tasted like medicine. I was so done. Fortunately, I got over that. Perhaps because it wasn’t a daily meal requirement. And today, I love me some berenjena. Especially the way Italians make it.

I wish I could say the same for beets. I’m not sure what it is about the root vegetable, but it’s always been something I’ve abhorred them. Yeah, abhorred.

I know they’re replete with vitamins and great health benefits, but their inconvenient properties offer nothing but added  dislike.

However, as a professional, I have to be open-minded to eating foods that don’t excite me. I took a leap of faith about two years ago and started playing with beets. Every part of the cooking process was accompanied with sounds of the vintage juicer. Painful.

But, I went forward with my meal and entertained Mami’s jokes.

The first effort resulted in a fantastic salad with  roasted beets cut into cubes and tossed with a robust blue cheese, tangerines, garlic, honey and mint. I was actually impressed and hence the curiosity of what else I could do with the deep-pigmented  vegetable was earthed.

And both Mami and Papi loved it. Reason enough to get over my distaste.

Unfortunately, a lot of that excitement was wishful thinking.

It wasn’t until last week that I gave beets two thoughts. When the 5 Star Makeover cooking group announced that beets were this month’s choice ingredient, I couldn’t help but chuckle. Not only had I missed participating for two challenges, but my return would be a borderline crime committed against my taste buds.

I then got giddy.

I remember making a commitment to myself to eat healthier, leaner and incorporate more vegetables in my diet in one of my first posts of the year. And, so again, I went forward with my meal.

I wasn’t particularly inspired by anything other than to make something that required a minimal amount of beets. Something super simple, but tasty. It instantly occurred to me to make a purée. How could that go wrong? No, right?

Lacking tremendous excitement, I approached this with a slight amount of laziness. I won’t lie. I washed one real well, cut it in half, sliced it and slapped it on the grill. I embraced the skin and left it on there even after it was cooked.

The purée kind of just happened. I transferred the thick slices into my processor and added apple cider, sugar (I went for honey, but it was so solid, I didn’t want to give it time to seep downward in the bottle), sea salt and a light olive oil I purchased in Spain back in 2007. I reserve that one for special occasions.

I pulsed it for about 2 minutes until it thickened up. The skin helped.

I scanned my kitchen and took no time conjuring up a simple salad. Apples, pears, and for a topping, red onion and ginger. Oh, and walnuts, because I felt it needed one more element of crunch. 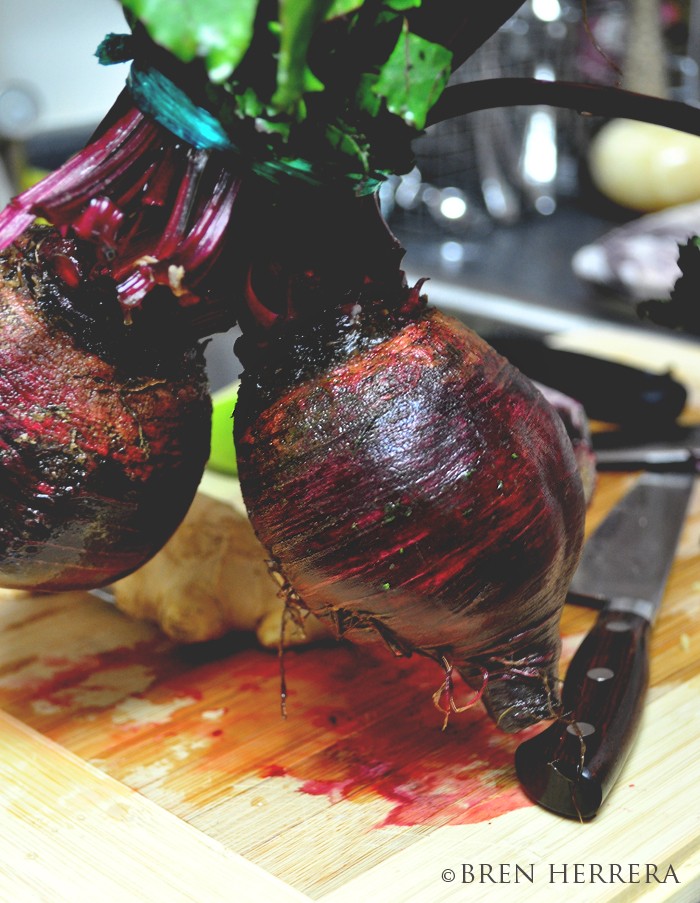 I find myself a liar!!  The end result was amazing. Hello!!! I loved it. And so did my guinea pig friend who’d never had beets. Everything about it worked. The texture, balance of flavors, simplicity and even colors. The only thing I think I’d change or add would have been tangerines and possibly a bit sweeter. I even thought that perhaps some thin slices of Manchego cheese would complement it all very nicely.  To that end, I adjusted  the recipe to reflect the sweet point I would have preferred.

I have a new found respect for beets, my friends. They showed off a surprisingly lovely aroma while grilling. That positioned me to be more open to enjoying them rather feeling obligated because it was a challenge.

In the end, I turned up 2 1/2 cups of purée which I’ll repurpose and continue pairing with other things. I don’t suspect it’ll take me long to devour, which is a good thing considering I’ve overcome a masked fear of a simple vegetable;  and who knows how long that’ll last! 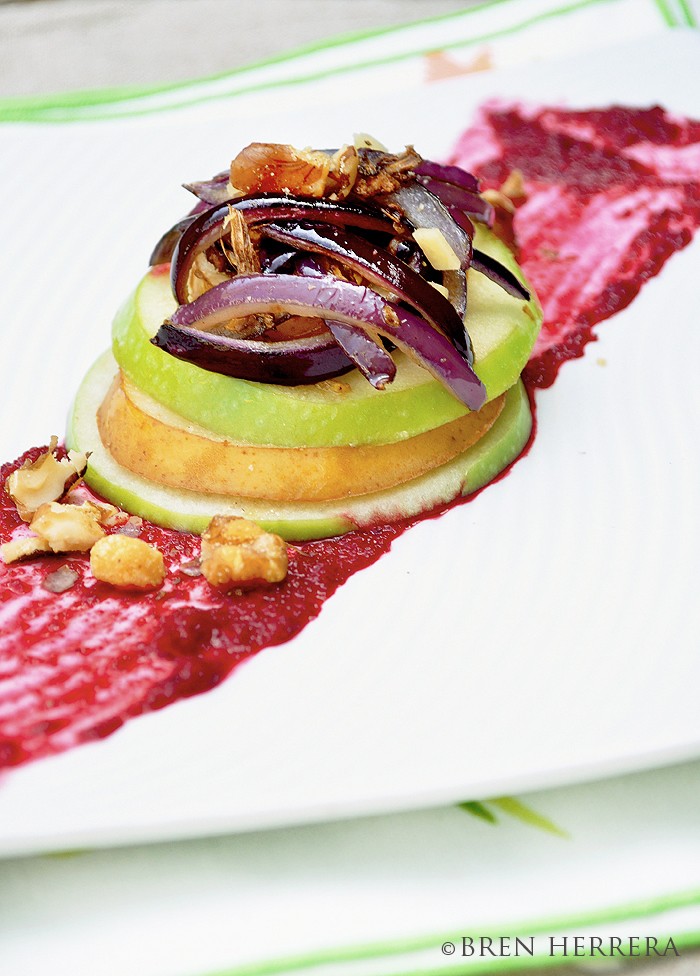 Using large stove top skillet, grill beets for 15 minutes or until al dente. Let cool for 5 minutes. Transfer to food processor. Add apple juice, olive oil, sugar (or honey) and salt. Pulse on low to medium setting for 90 seconds or until beets are smooth, showing only a slither of texture. In small skillet, melt butter and cook onions and ginger until both are softened without brewing or becoming translucent.

To plate, use pastry or rubber brush and spread one tablespoon of beet purée onto plate. Place one slice of apple on middle of plate. Layer pear and then apple until desired height. Top with onion and ginger mix. Sprinkle walnuts on top.

Chef’s notes: A bleu cheese crumble or Manchego slice would work well with this salad. Tangerines are also an option for added fruit and color.