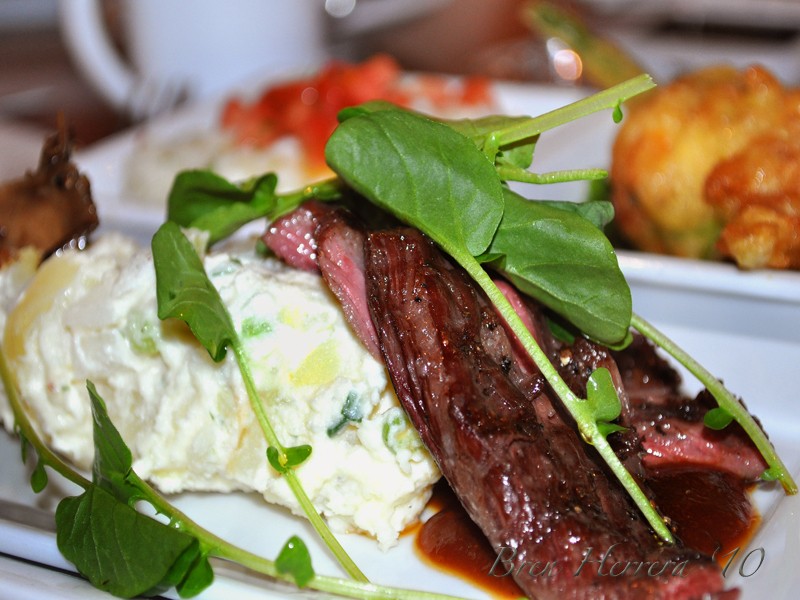 This post is special for two very simple reasons: I wrote 1200 enticing words for this review and LOST it all w/out any explanation, forcing me to now be concise and still affect you the same way; and two, because I’m re-writing it from the Apple store as a way to get my mind of the irritation I had hours ago (and duly noted on Twitter @BrenHerrera), while I get a new keyboard for my iMac. Let’s see how concise I can actually be.

So, I had begun by stating that Atlanta is anything but short of art, music, food innovations and creativity. I don’t get out much, less it’s a media-related event or an invitation to swanky soirées or concerts (like Thursday’s Sara Bareilles’s concert I’ll recap here). So, finding out about any new openings, new movers and shakers and resto openings, requires a personal invitation. Not that spontaneous findings or outings are unheard of in my daily calendar–it’s just that my green office walls are a vortex. 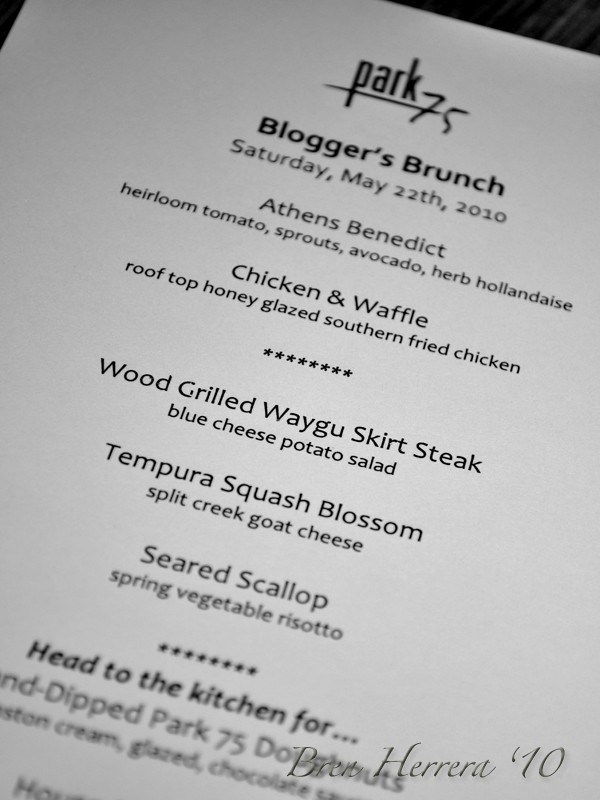 One such invitation was to the 1st annual Blogger’s Brunch at Park 75, an intimate, yet airy restaurant at the Four Seasons. Initially I was excited to go, but I had just lost my dog Geisha two days prior, so getting dolled up and mingling with anyone, let alone play the part of foodie blogger was the last thing on my mind.  I had no interest. I was also driving to DC and NY that same afternoon and had yet to pack.

But, my good friend Christina (@melecotte) convinced me to join her and so I put on my best face and fedora and drove downtown. 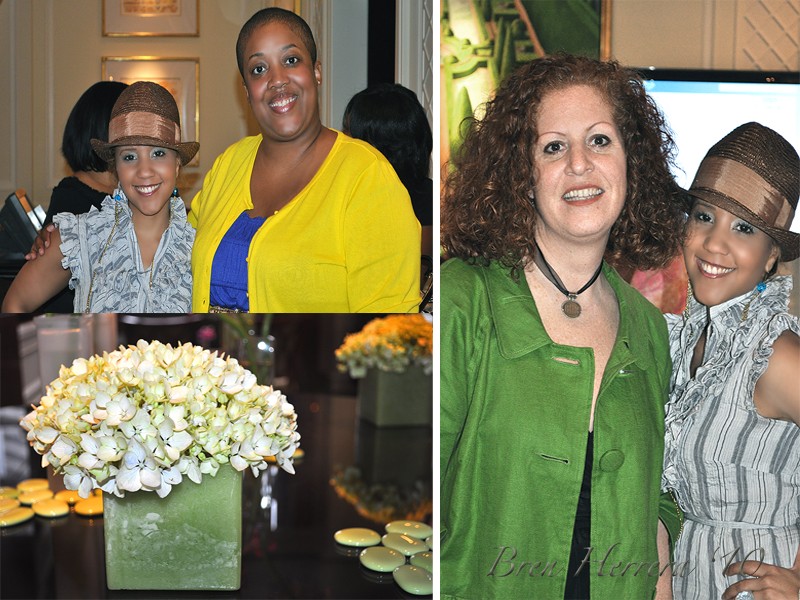 (from top left: me & Shameeka, me & Christina, gorgeous hydrangeas)

I love and always expect exceptional service. Mediocrity is so passé and I don’t dish it out. Pulling up to valet was nothing extraordinary, but walking up 40′ wide marble stairs to the 2nd floor and entering a lovely and bucolic clad lounge was just what I needed…only I was at the wrong place!

I was running late, due to having an emotional conversation with my Vet about Geisha’s sudden illness (she’s deserving of an homage but I’m not quite ready to put it out there), which caused me to miss the rooftop terrace presentation of culinary innovations spearheaded by Executive Chef Robert Gerstenecker. I missed the spiel on his conscious move to take planters and transform them into skyhigh gardens as a way to be sustainable and give his diners an opportunity to know exactly where some of the ingredients come from. 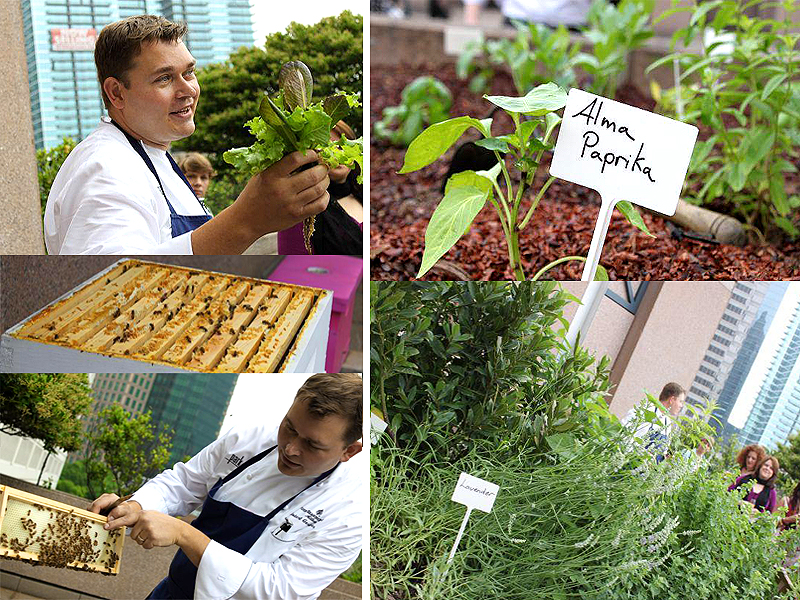 I cheated and took verbal notes from Christina, who showed me he was growing herbs and vegetables such as fancy tomatoes, lavender, oregano (a must-have in my kitch), basil and a variety of peppers. I’ve seen other restaurants do something similar, albeit not as refined.

But, the kicker and his most genius move involved bees.

Chef has taken his personal stash of Italian honey bees and transplanted them to the terrace in order to assist with pollination for his growing garden. We know the bee population is in jeopardy s are such a vital part of the growth of flower and plants. I find his move smart to keep them alive and reproducing. Not to mention he’s able to make his own honey and use it to give a sweet sprinkle to his food.

I’m sorry I missed that whole hands-on exposition, but it’s somewhat okay because I’ve done something just as extraordinary here during a culinary trip to Trinidad.

Back inside P75, we sat at liberty and were tagged with our Twitter handles. Brunch was all about the Southern Style. Classic dishes kicked up a notch–starting with a bacon strip laced Bloody Mary. Mine was good, which I sipped sans the bacon, but not long enough before we were dished with our 1st course.

One thing about me. I love me some runny eggs. The Athens Benedict, paired with heirloom tomato, sprouts, aguacate and herb hollandaise was divine. I almost got away with taking an extra bite from Shameeka’s plate (@thebrokesocialte), but her eye is quicker than those buzzing bees. 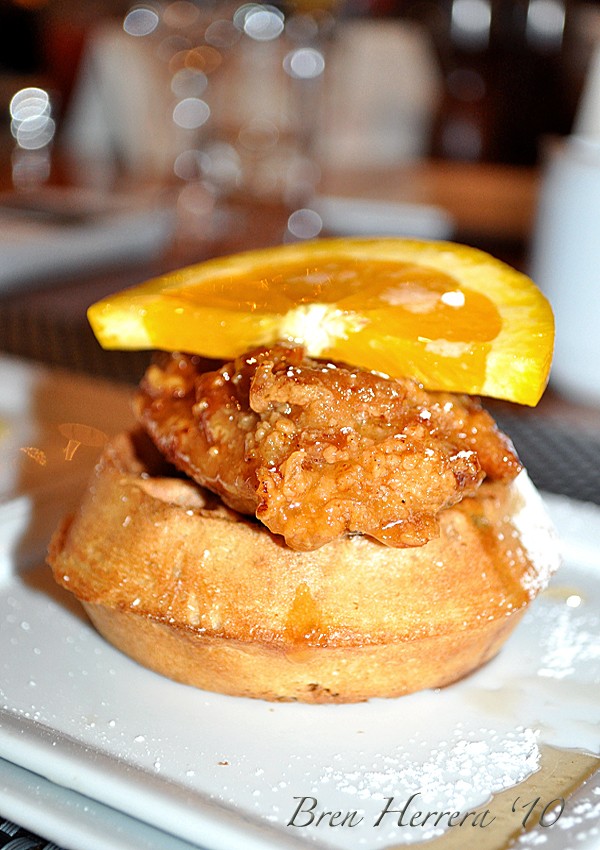 The 2nd course was the most classic thing you’ll ever eat in Atlanta: Chicken and Waffles. A Southern basic, this one here mis amigos is to be recockened with.  A mini-me version, it was perfect to make room for all the other goodies. Though I stopped eating fried chicken centuries ago, I couldn’t resist devouring the combo. Honey from the rooftop was drizzled overtop the chicken and saturated the plate. Perfecto.

Let’s talk about the 3rd course. A succulent and perfectly done Wood Grilled Waygu Skirt Steak served with blue cheese potato salad. The bistec was on point but the salad was a bit bland for my palate. The blue cheese saved it. I tried to trick them into giving me the recipe, to no avail. That’s okay because little do they know I’m great at reverse engineering foods in my kitch. I’ll make it happen.

I heard the Tempura Squash Blossom was amazing and a lot of bloggers’ favorite, but I’m not a fan of tempura so I simply ate the risotto that sat beside the scallop I also skipped.

While we updated our frenzy on Twitter, chit-chatted with our table mates, swooning over the basil lemonade and taking pictures of everything that graced our plates, we were interurupted and quickly whisked to the kitchen for a moment with dessert. 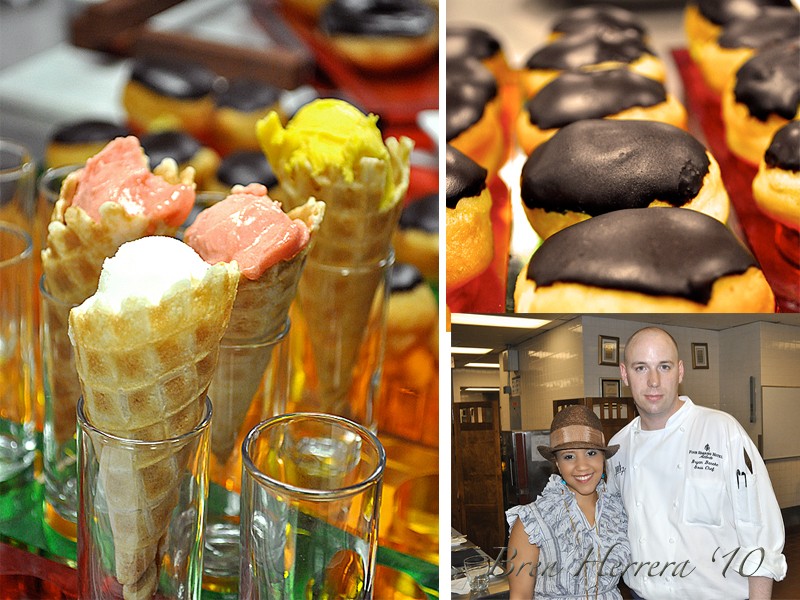 This was supposed to be a tasting. Not so much. This was a full-out demo and instant making of hand dipped doughnuts, sorbets, chocolate chips, cinnamon balls and other things I dare not even remember. I’m trying to keep my girlie figure so I just stared at everyone lush and drool over the deliciousness. I did sneak in a mango and lemon sorbet served in mini waffle cones. Too cute!

The chef and his sous were sweating so hard to ensure a cavity in our mouths, I don’t think they noticed how much effort they really put into satisfying us. 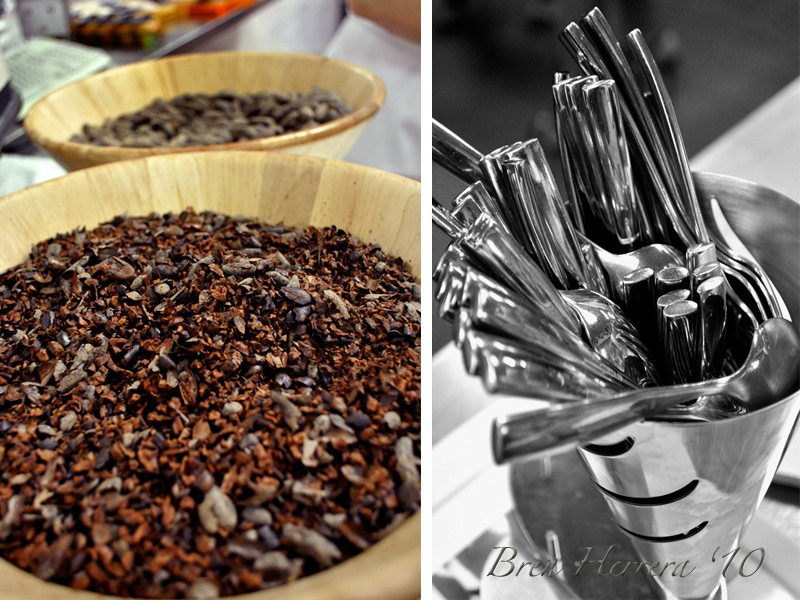 After getting a good hot whiff of the wood and brick oven, smelling fresh cocoa beans and resisting the urge to have more sorbet, I exited the kitchen. Had I put anything else in my stomach I would have been pulling over to take a nap during my drive to DC.

Back in the dining room, perfectly cornered on the 2nd floor of the hotel, I sipped on my green tea, took another swig at my Bloody Mary and thought about heisting the beautiful hydrangeas, orchids and green pebble stones.

Thankfully, I spared myself embarrassment because we were given swag bags by detail-oriented Marsha and Abby of M-Sqaured PR, filled with incentives to return to the Four Seasons and Park 75. Not that after the brunch, we’d need additional bribing.

Everything was delicious, unpretentious and splendid. Park 75 is not just a place for lucky bloggers to be spoiled, but a place for anyone to come in and feel sexy, indulge in a fabulous atomosphere (both in and out the restaurant) and eat conscious and sustainable foods. I got a small taste of why Zagat Survey rated it as the” best brunch in the world.”

If you find yourself in Hotlanta, I’ll pull out my blogger card and reserve a brunch date. And I’ll make sure you see the honey bees, too!

While I wasn’t able to get my hands on a recipe from anything we had for brunch, the chef was kind enough to share this seemingly fabulous ice cream recipe!

If you make the ice cream, please do tell me how good it is; that’s if I don’t go back first and have one!

For the Ice Cream:

Mix all ingredients ( except Peaches) in a heavy bottom pan and heat to 170 deg. , stirring occasionally. Strain mixture and let cool( over night preferably). Pour mixture into an ice cream machine and turn until a soft peek is obtained.

For the Honey Caramel:

Place the peaches on a sheet pan and put under broiler until peaches are caramelized and tender. In a heavy bottom pot, pour in honey and bring to boil, cook until it slightly thickens and reduces, add peaches, pecans and salt, remove from heat and chill

When the Honey caramelized peaches are chilled, fold in to the ice cream and   just enough to fold in, do not over mix.  Place ice cream into freezer for at least 1 hour before serving.

Drizzle some fresh honey over the ice cream before serving.