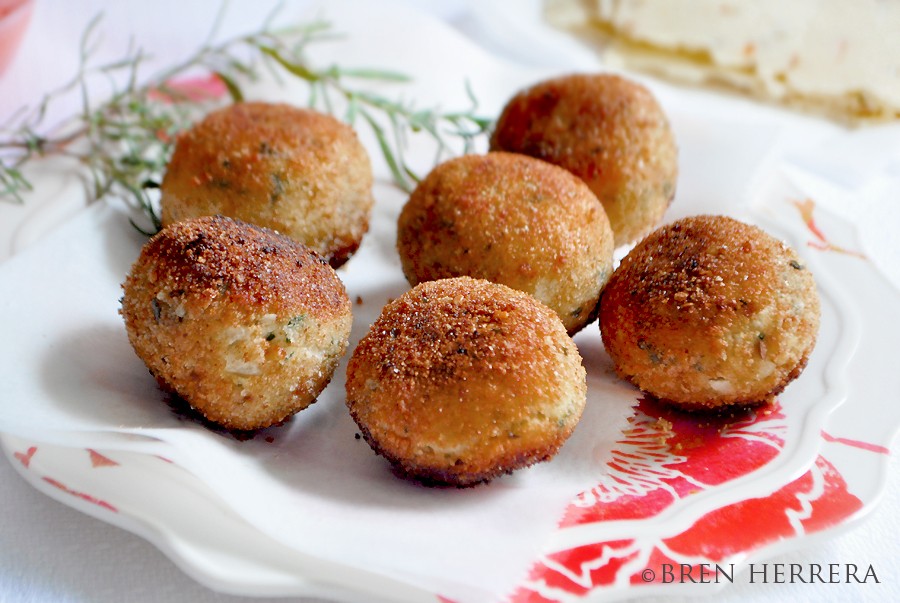 It all started as a quiet morning helping Mami make some croquetas de pollo for my eldest brother who lives in Miami. She’s that kind of mother — feeding her children from thousands of miles away –always looking for an excuse to cook. Not that she really needs one, but when it serves a happy belly, the gleam on her face is priceless. So I sat down with her at the kitchen table and started making my favorite chicken dish known to Cuban food. While she rolled and shaped a batch of cien into sausage like links, my mind wandered into culinary space — how could I make these with a more Peruvian twist? And with cheese? Without sacrificing its awesome authenticity?

I erupted into hysterical tears when she sidelined my internalized thought process to recount some childhood story of cooking in Miami. I entertained her but went back to this mental food playground. I was determined to find a suitable modification to complement Peruvian chicken dishes.

Since working on Sargento‘s Flavor Journey and exploring food trends, I’ve been toying with cheeses and how it plays a role in Latin cuisine, mostly Peruvian. I’ve not found an extraordinary amount of classic or mainstay dishes that use queso, though for being Latin, Peru features it far more than  most other Latin kitchens, barring the Mexican cocina, which uses cheese like Americans drink coffee.

I did some research and came close but not enough to a chicken croquette.  The one remotely similarly cooked “street food” (and let it be noted that I hate croquettas being deemed a street food; I mean have you considered the tedious bechamel folding process?) is the papa rellena which is to die for. I remember sharing once here before how Mami used to sell papa rellena on a street corner every Tuesday with her friend Gloria. I loved it so much I eventually started making yuca rellena.

The Peruvian version of papa rellena is probably less popular than ours, but since their food culture is renowned for having over 1000 varieties of potatoes, they’re ubiquitous in Peru. So, for the sake of comparing their papa rellena, which could technically be called a croqueta, to our chicken croquette which I’ve adapted, I dug into what makes theirs special. And then hoped to make some edible connection.

Much like our chicken croquettes, their papa rellena is supposedly super creamy. Not sure how they accomplish their smoothness,  but we do a savory béchamel to get the rich and perfectly textured filling.  And unlike ours, their filling is made up of beef, tomatoes, hardboiled egg, and aceitunas, with some other ingredients depending on the region. Most basically, they’re served with a fresca salsa criolla, which most often than not will have aji amarillo. 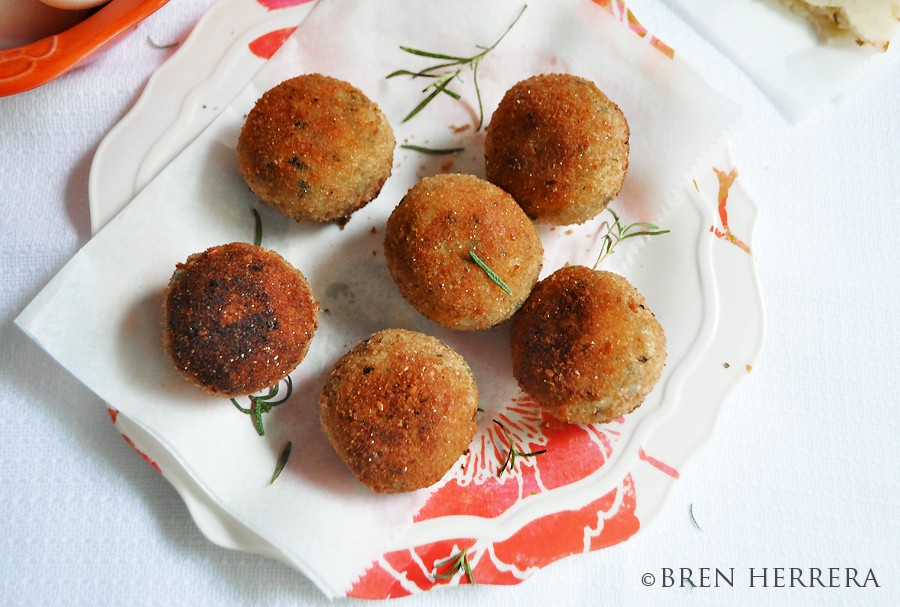 Fortunately, there aren’t too many limiting rules when adapting and so I had a great idea that worked.

Make our classic croqueta, but add some of those staple Peruvian ingredients — including cheese — though I’d be subjected to some sort of revocation from the purists.

While Mami continued to shape her rationed stash, I snuck enough masa to play with different Sargento cheeses. The only two viable contenders were bleu cheese and pepper jack. I did a few test tries. I thought the latter would be amazing and rid it of a “street food,” snack, but in the end, the pepper jack sang and just made more sense. In lieu of adding aji amarillo to the chicken mixture, which could actually work with another cheese like mozzarella or even baby Swiss, I knew the spicy cheese would suffice.

And add an additional layer of smoothness.

And the right amount of unexpected heat. 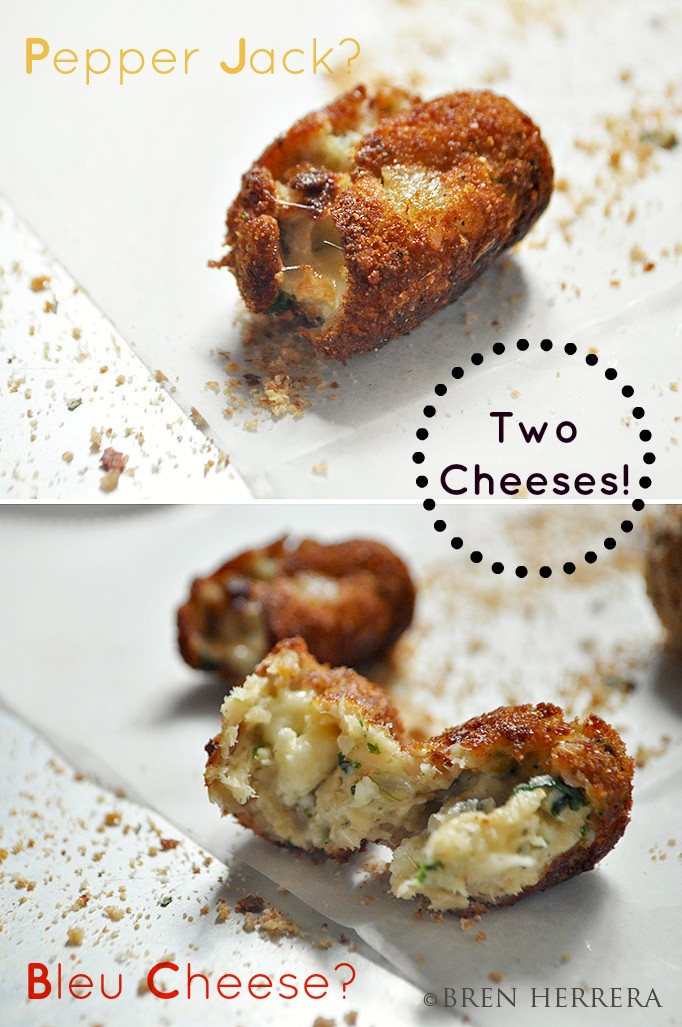 And sure enough as I anticipated in my thoughts just an hour prior, it didn’t disappoint. I morphed an ultra classic dish into a Latin Fusion delight.

Even Mami, a  wanna-be-fusion-lover, though a purist at heart, liked it. I’ve given her a nuveau idea for next time. And you already know how that makes me feel! 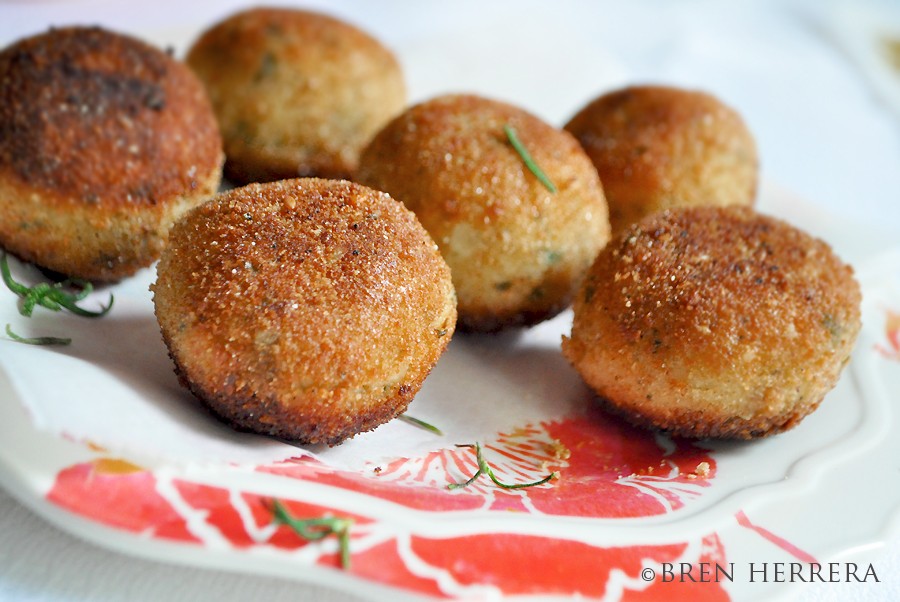 If you’ve got a few hours, try these out. Work on folding bechamel and enjoy playing with different flavors, though never forgetting the true core of its glorious adoration… a creamy filling of pulled chicken with notes of nutmeg, parsley and a lovely amount of garlic.

Though not Peruvian in theory, definitely inspired their commitment to cheese and spice!

Bring chicken to boil in salted water and cook until tender. Drain and let cool. Once cooled, pull chicken into really thin “strings” and set aside. In a medium sauce pan, lightly sauteé butter, parsley, onion, garlic on medium heat; add all of evaporated milk and mix well. Before milk begins to boil, add nutmeg and black pepper, stirring constantly for 3 minutes. Maintaining the mixture without a boil, stir in flour and begin folding mixture. Slowly add chicken and cheese and continue to stir constantly at medium speed, making sure the dough does not stick to sides of pan. Reduce heat to low. Right before you remove dough from pan, mix in cooking wine. Place dough on large platter and let cool for two hours, before refrigerating . You should have a beautiful, large and round ball of chicken dough! (sorry for not having a picture)…

Whisk eggs in bowl and set aside. Place bread crumbs in separate bowl and set aside. Pinch about 1-2 tbsps of dough and shape into 1-inch balls  (see picture above for reference). Using a spoon, roll twice in egg yolk mix, covering entire croquette. Roll and fully cover with bread crumbs. As you shape and cover the croquettes, line up on wax paper. After you have finished all of them, set aside for about 15 minutes. In large frying pan or small deep fryer if you have one, cook croquettes in 375 degree heat, until golden brown.

* you can store extra ones in the freezer for up to 4 weeks!!