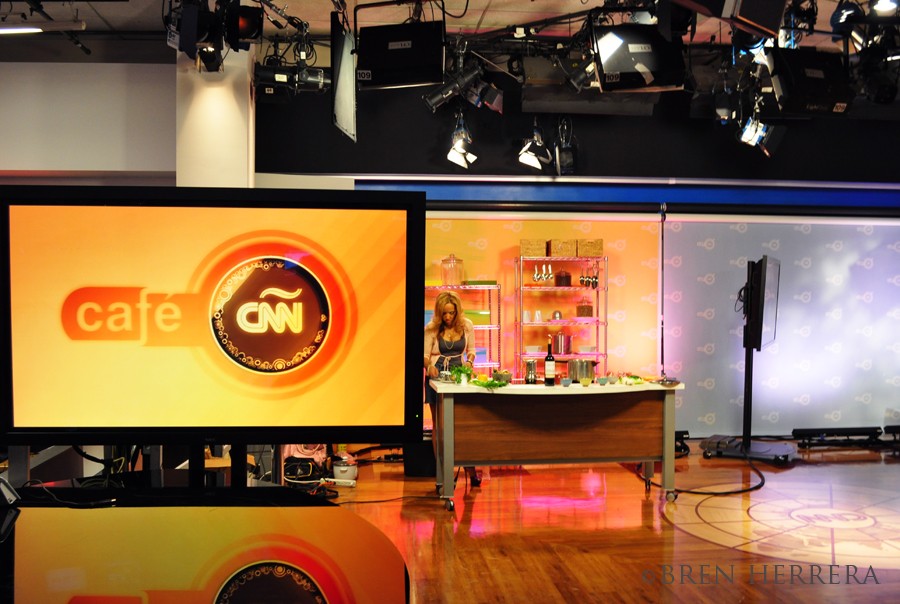 I never thought I’d take to the camera as much as I do. Really. While I’ve done live TV appearances over last 3.5 years, it never gets old to me. It’s a new experience of elation every time.

This most recent time was beyond anything I expected on so many levels. As you can see per the title, I was on CNN Español “Café” morning show. How appropriately named! Me, on a show called “CAFÉ!” I’m all over it.

The excitement wasn’t because we were airing live in front of potentially 600 million homes, rather because it was my first international appearance and in Spanish, my native language (though English has clearly taken over). The taping was on Oct. 7, and I’m still tickled as if it were my 1st time in front of massive cameras and studio lights.

(something to the effect of, “oh snap! Induction burners means I can’t use my espresso maker… what now?!”)

I never believe in “chances” or “luck” (though, somehow those that amass major critical acclaim always say a bit of luck had something to do with their mega success). I have always been of the school of thought that hard works pays off. And the invitation to come on CNN is proof.

It did “just happen,” the invitation that is, but not the meeting with the producer that invited me. It was all a matter of knowing the right people, being at the right place at the right time and during those times knowing how to do a NY-minute elevator brand pitch. I have a superb gift of gab.

How “lucky” or perfectly appropriate that I happen to live 15 minutes from world headquarters. Regardless of that, I didn’t have to make that standard follow-up email or call, pretty much exhausting all human resources to ensure an air date. I got an email the very next day after meeting the producer, asking to choose a date to do a live demo.

I won’t lie. I had a glass of wine and cheered with my parents (I had flown home the same day of the in-person meeting), I was so giddy. Was it just another TV spot? Sure. But the Emeril episode was 3 years ago and this was a completely different beast. No re-do’s or editing.

I went off to Mexico to vacation with my family and left the invitation in the back of my mind, hoping to really execute, but still wondering if it would happen. I’ve yet to get to recap my Mexico trip with you, but a lot came from that trip.

Like tasting new dishes I’d not tried during prior trips to the country. Some incredibly amazing dishes, not to mention. I found inspiration in those dishes and thought I’d just leave them there; so as to have something to hold on to until next time I went back. 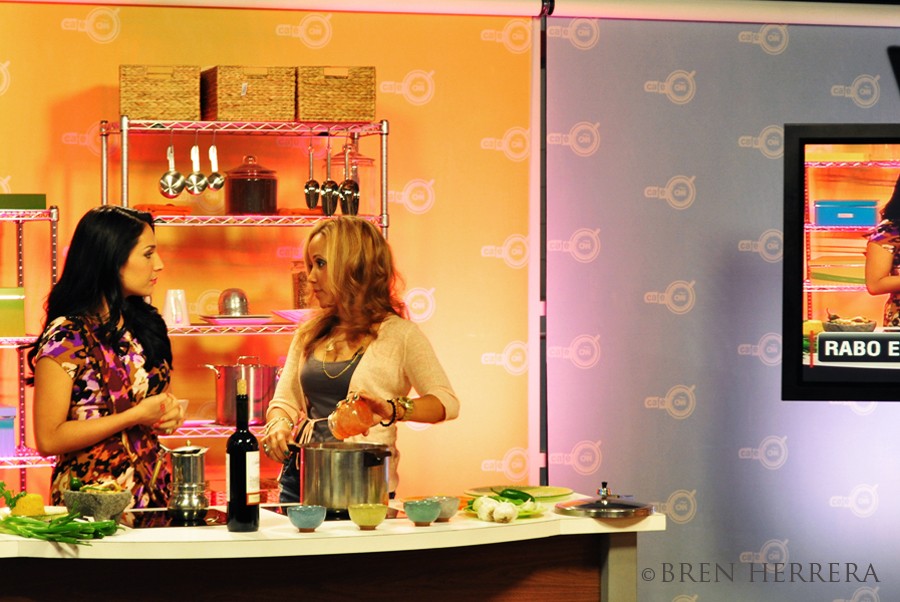 (adding the tomato sauce and explaining the process)

But, as things would go, my segment was scheduled for just 3 weeks after our trip but one particular dish from Mazatlan stayed in my mind. I was still salivating at the thought of it and could not purge its delicousness out of my head or heart.

My father’s writing a proper review of the restaurant where the fabulous dish was served up, oceanside, so for now, my interpretation is what kicked off a wave of unimaginable feedback from Mexico and other Latin countries seconds after the segment. 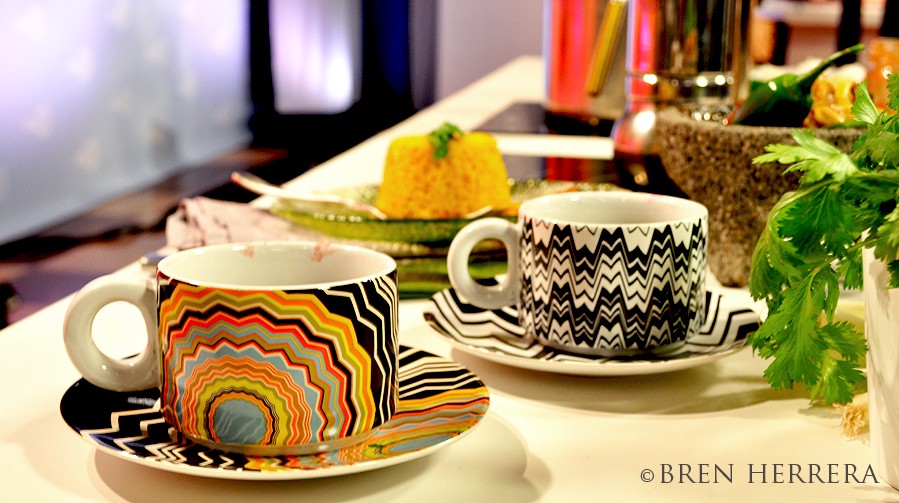 (the fashionable Missoni espresso set we sipped Cuban espresso out of)

Another lie I won’t tell! I was an absolute emotional basket case the night before! Por qué? Well, my original segment date was pushed back a week and the usual aiding suspects weren’t going to be avaialable on the 7th. Dios Mio! If you’ve done live cooking segments before, then you know there’s no way to pull a stunt like that by yourself.

Have I done it before to really say? No. Do I want to start now. Unequivocally not.

There’s so much that goes into a taping that seems only lasts 30 seconds. And if you know me, you know there is the requisite new show to rock, arm candy courtesy of my mom that has to be displayed and other fashionable accoutrements to dibble and dabble into while tasting — in this case, a pair or new purple suede pumps, some Swarovski crystal bracelets and the ever-so-coveted Missoni for Target espresso set.

The latter. I won’t belabor you with points of no real relevance, but the hell and back I went through to ensure safe and timely delivery of those lovely, bigger than demi-tasse (really cappuccino sized) cups to sip on Cuban espresso with my hostess, was no joke. Thanks to a few people, I was able to get my hands on one after two weeks of intense searching. The kind of searching that halted my life. Really. But, more on that on the fashion blog.

Fortunately, at the 11th hour, literally (because somehow God has donned me a spirit of being able to work best under intense pressure), I was able to solicit the help of two friends: one for prep and one for driving, unloading, loading, carrying, unpacking, staging and everything in between. Including taking all of these pictures.

And then of course, the most important part of the segment was the food. Fortunately for me, that’s the easy, breezy part. The dish: a Mexican-inspired traditional Cuban dish! Fiery oxtail served in a rock mortar and pestle–the very ones used to make amazing table-side guac. I made my oxtail as I normally would, adding a few Mexican ingredients and topping it with Gruyère, something that’d never be done in Cuban cuisine. At least to my vast knowledge. But, damn it it if didn’t work!

Last lie I won’t tell. So, during taping, as I approach the step about topping the dish with cheese, I mention that the Gruyère is French! Oh em gee! What a faux pas, so I thought! I had French onion soup on the mind, of all things. I went home, watched the tape and tweeted on myself…. All to do a bit of homework and find out there’s a French version of the queso that I now will melt onto everything!

Because if it worked on oxtail, surely it must work on anything.

The lovely hostess, Alejandra and I did our 6-minute segment in a breeze and was done faster than my pressure-cooker could get a good hiss! No spills, no mess, not splattered oil and a solid sip of Cuban espresso. All was fabulous!

A day’s time of prepping for the amount of time it takes my espresso to make. But worth every single minute.

And, I’m so terribly happy to report I’ve been invited back for a few more segments. Woot! Woot! Woot!

Next time, I’ll just know to have my makeup artist (because one is awfully vital to looking decent with 3 hours sleep) at my place at 4:30 and not 5:30. Just sayin’. An hour makes a difference.

Here’s the final dish! I will make an apology for the pictures’ quality! What can I say, my friend D couldn’t have done much more. I mean I sequestered the guy the night before!

See the full vid here, under FETV. And though it’s in Spanish, you’ll get the gist of the dish and hopefully appreciate it amazingness! Plus, the recipe follows in English and Spanish. 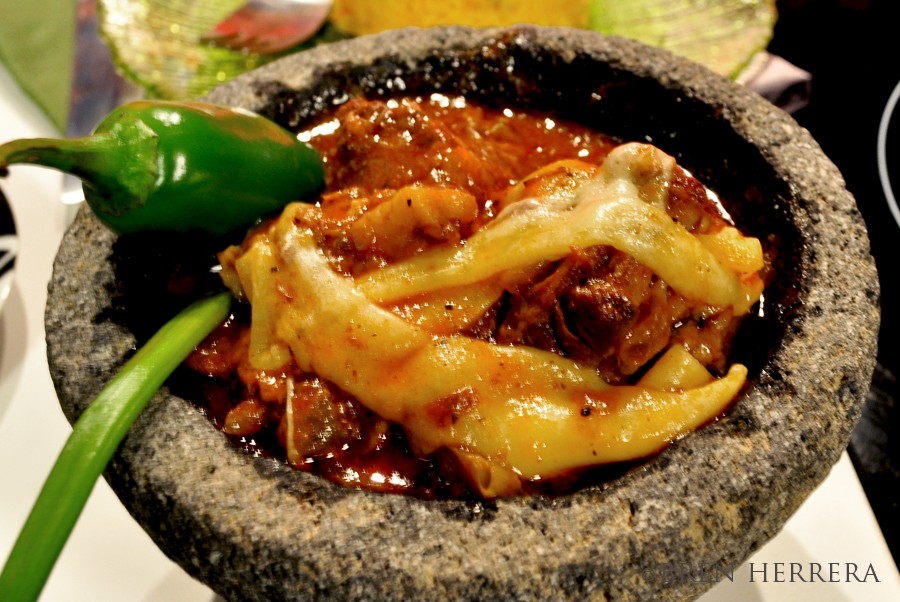 (Bad, bad picture, but we were pressed for time to clear set. But, you get the gist. Oxtail in molcajete.)

Ingredients:
Method:
Clean oxtail, removing most of excess fat. Season oxtail with salt and pepper. In large pot, heat canola oil and brown oxtai on all sides, approximately 5-7 minutes. Remove oxtail from heat and transfer onto separate platter. Let cool. Rerve canola oil. Remove meat from bones. In 6 qt pressure cooker, add canola oil used to brown oxtail, meat, and all ingredients except for jalapeño, spring onion and cheese. Gently combine well. Close top and turn pressure gauge to 15 lbs. Cook on medium heat for 30 minutes. Turn heat off. Allow all of pressure to be released before opening lid. Add spring onion and jalapeño to pot. Let cook without lid for 5-7 additional minutes. Transfer oxtail and sauce into a large and deep molcajete. Place cheese on top, allowing the heat of the dish to melt it. Spring onion and jalapeño can be used as garnish. Serve with yellow saffron and cilantro rice.
Serves 3-4