Cooking for a GA Gubernatorial Candidate! What Does He Like? Stuffed Bleu Cheese Mushrooms And… 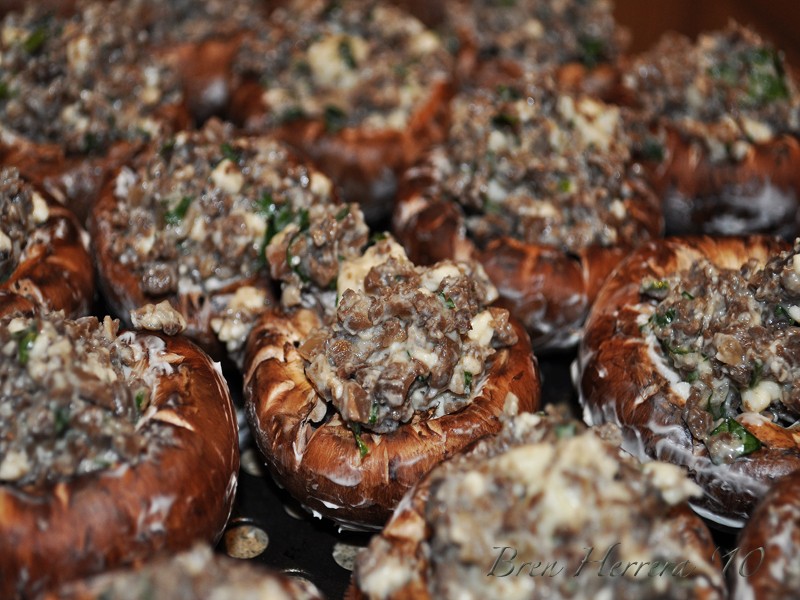 Last minute gig requests are exciting but stressful as hell. The client is usually  at their wits end trying to find the right person for the job, doesn’t have time to do a tasting (perfect for me) and typically is very flexible because they’re running out of time.

And, so as it goes in my life, I got one of those calls two weeks ago. I was told the event was a fundraiser for a friend and needed heavy hors d’oeuvres for 80 people for 3 loooong hours. Love that, right!

Well, it’s all good and dandy until you can’t locate the sous chef that’s been reliable in the past, and who has actually committed to doing this gig with me.

This is when cooking under pressure takes on full meaning. With one days’ notice, and still going back and forth with client about the menu,  I snatch up the timely chef April Higdon  and a new friend who likes to cook. They both agreed with last minute notice and we get to preppin’.

When I’m cooking for myself or for a small, intimate dinner party in my home, I like to be relaxed, clean as I go, sip on some wine, listen to classical music and have my laptop with me in the kitchen in case I need to IM someone.

But when it comes to prepping for a party that size, my whole game changes. My kitchen becomes a war zone, minimal cleaning-as-I-go actually takes place and I’m usually running late. And, this is just the prep since the actual cooking takes place at the client’s house.

While I had April finishing up the chopping and saucing, I hopped in the shower, got half-dressed and recall screaming from the bathroom asking her to check on something in the oven.

That girl there! She can move. By the time I’d gotten out, everything was packed up and loaded in my car. I’d given her wine and Cuban espresso; clearly the combo put a jet somewhere up in her!

Heels? Check. That was 2nd most important to all the food being packed.

Off we were, 30 minutes away to a city I’d never been to before outside Atlanta, to meet a client I’d not met before, and to cook for a fundraiser for someone I didn’t know.

I knew something was different about this gig as soon as we pulled up. From the outside, the house looked enormous. As soon as we walked in, we see the difference. More like 15k square feet. 2 men greeted us and quickly offered drinks and a private room to hide our personal belongings. Oh yes, and my friend that likes to cook had beat us there. 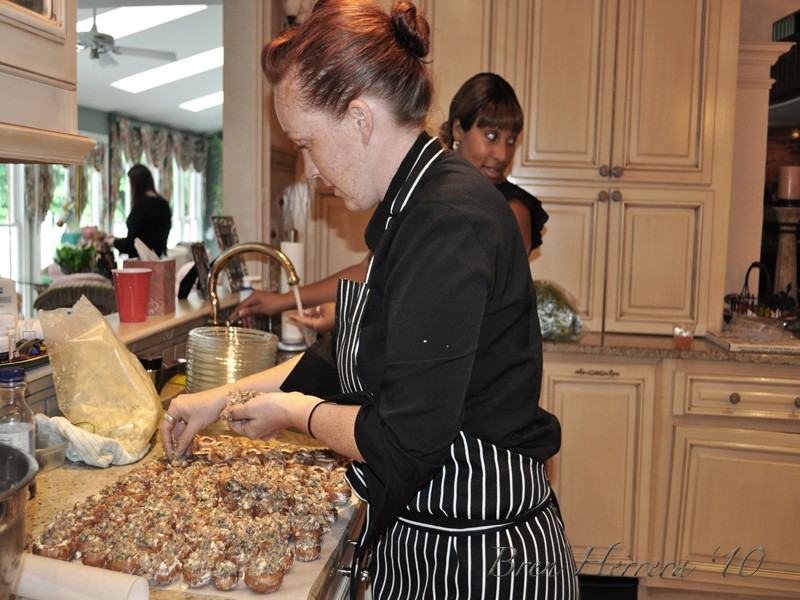 Still no sign of who the fundraiser was for. Within 10 minutes, a beautiful Mexican woman walks in and introduces herself. The owner of the house walks in behind her and says very little, other than ‘hello.’ He’s obviously far removed from the situation, albeit inquisitive on the menu options. So, we put on our aprons on and got to hustlin’. We had 2 hours to work our way around the kitchen and get ready to serve 80 guests.

This is when I find out my new friend that likes to cook is a former chef with professional training. She and April actually went to the same school. YES! Not only did Canika show up looking hot in her red pumps, but she really can cook and knows a little more than just brushing mushrooms!

At 6 on the dot, guests start ringing the bell, while others creep in through the back door–which happens to be in the kitchen–and a big no-no when I’m cooking. But, it’s not my house and the bartender was keeping us slightly giddy with margaritas and other libations. 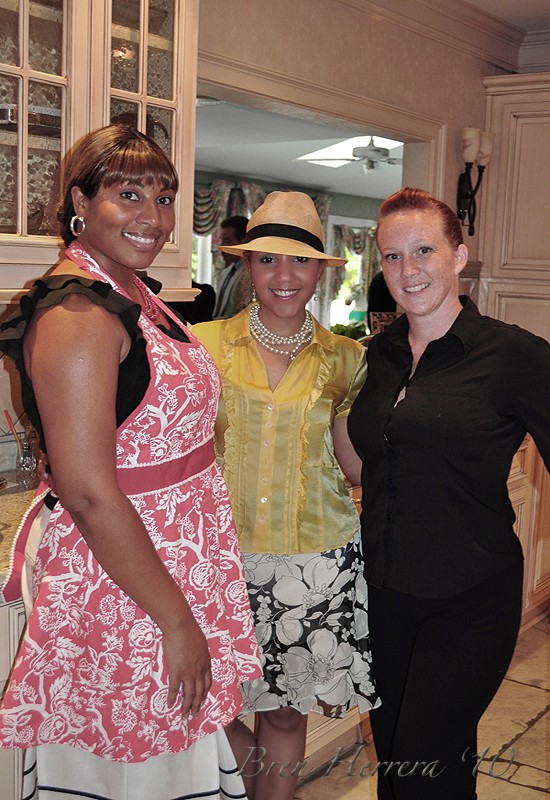 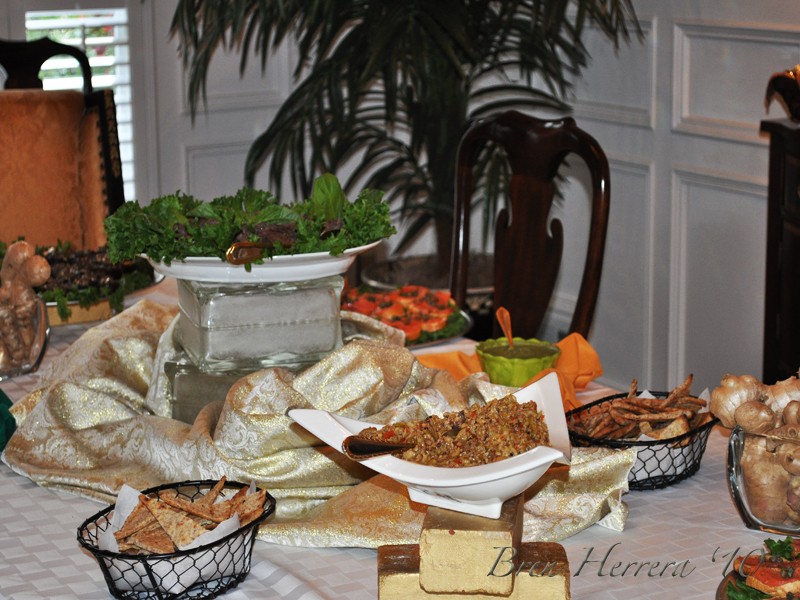 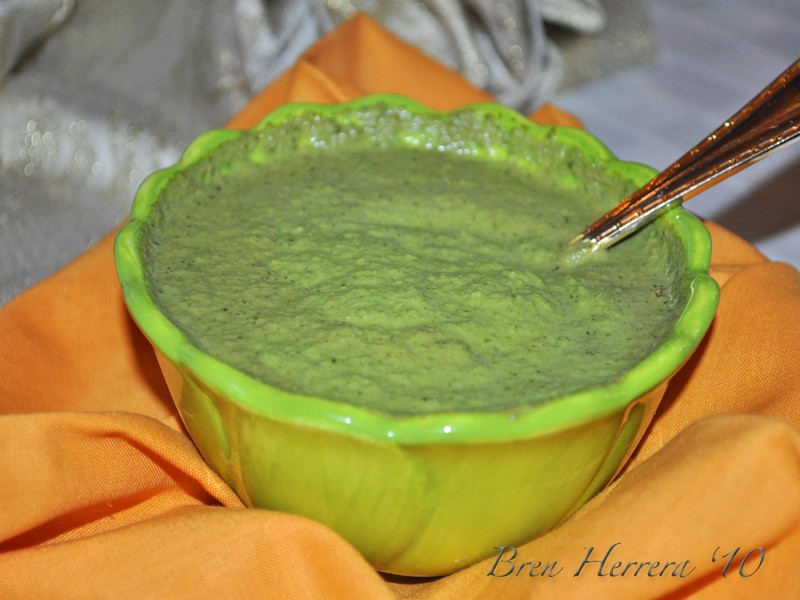 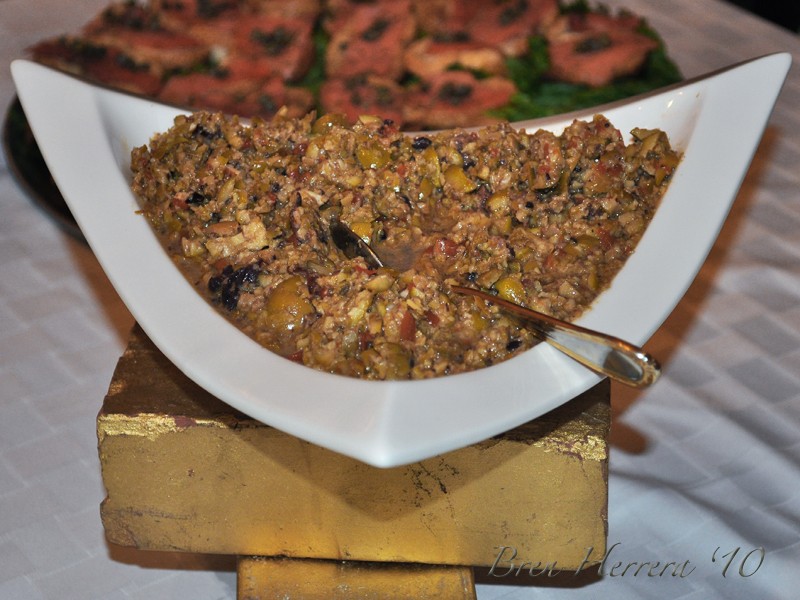 (spicy tapenade with a “Jewish” kick as one supporter said)

The party got started and two additional Mexican lovelies walk in the kitchen and introduced themselves. One is the Executive Assistant to the home owner, the other, his underwriter. Underwriter? Now I’m curious. The client, whom I should tell you is the homeowner’s daughter, never disclosed deetz on this soirée. Well, the girls tell me that Mr. T (home owner) owns a holding company with about 10 insurance subsidiaries and he’s hosting a fundraiser for  Georgia’s Insurance Commissioner who’s running for Governor. 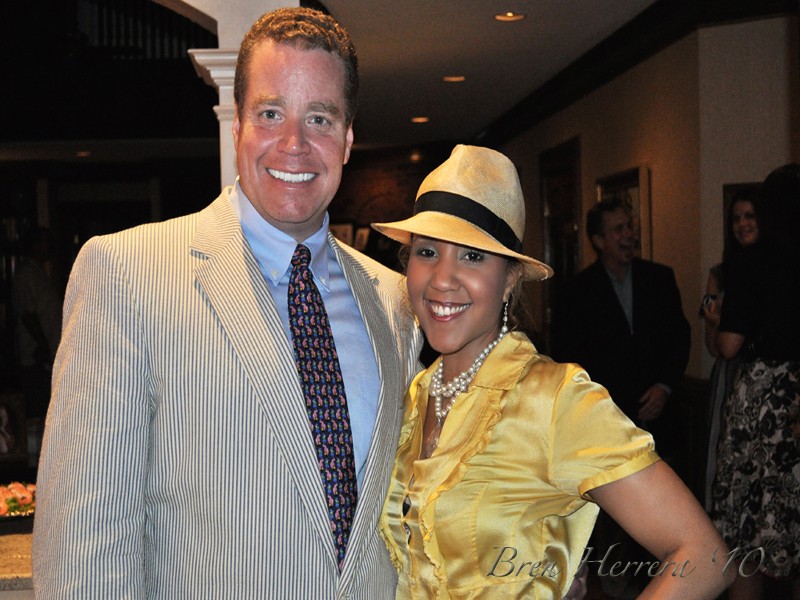 (me and candidate John Oxendine)

This means a house replete with PAID individuals, ready to dish out loot to a man vetting for a heavily coveted State position. And we’re were over in the kitchen sippin while dishing out our  hors d’oeuvres.

I finally met the candidate (the table in the foyer now makes sense–laced with bumper stickers, a huge box for check collecting and literature), John Oxendine–a conservative republican.

Great. How ironic. I’m a democrat, an opinionated one at that, and I’m serving up 80 republicans that just may have avoided my food had they known. But, I played it cool, hyped up my Cubanism and clicked my heels several times.

I was able to spend some personal time speaking with John (yeah, we’re on a 1st name basis now). He  inquired as to my background, told me his next private fundraiser was being hosted in Miami by his friends Emilio and Gloria Estefan, complimented me on all the food, though he guessed way wrong  on one  of the dishes and finished off be inviting me to be the chef at the Governor’s mansion.

My evening was complete at that point!

He gave his speech to a focused and excited crowd of supporters and surprisingly mentions my impresario spirit. The tie? His platform is all about helping us small business owners. “Business owners like Bren will revive our depressed economy. I’d rather spend money on 10 like her that will employ 50 people, than one large company that employs 1,000.” 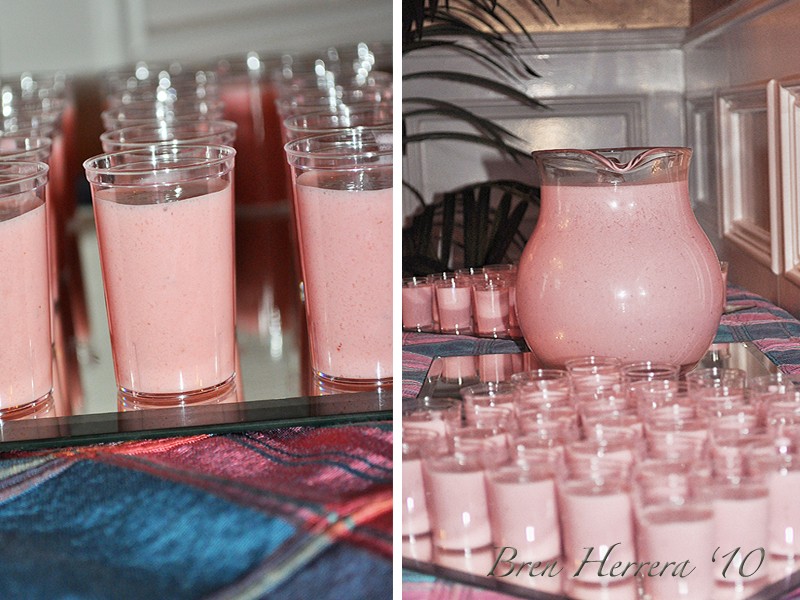 The evening finished without a hitch; well almost. But it’d be politically incorrect to even indulge you with details on the real ending. The important thing is that the gubernatorial candidate welcomed me to come cook for him once he’s in the Governors Mansion and he just loved what he called my strawberry smoothie—really, a chilled berry soup. His favorite though, were the bleu cheese,  garlic and cilantro stuffed mushrooms, which April packed faster than I could say “yes” to Oxendine’s offer to cook! 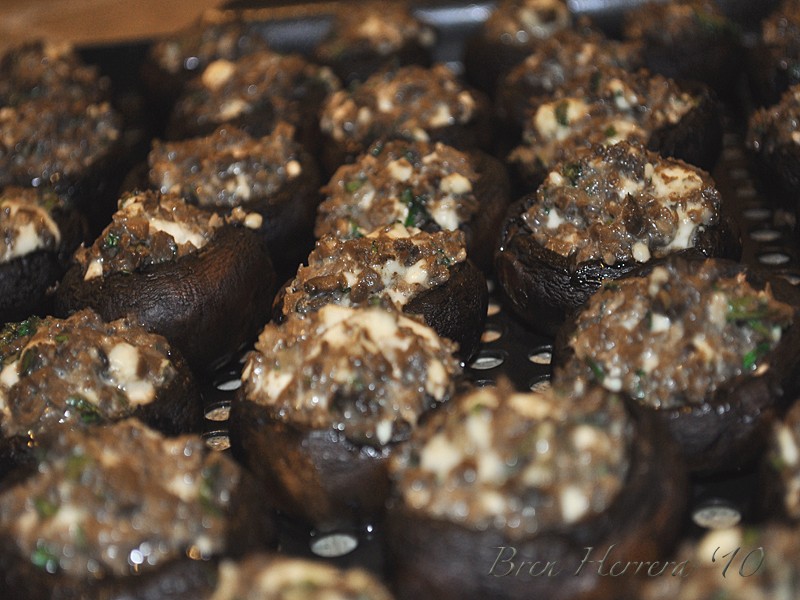 (finished mushrooms and I’ll be damned if they weren’t great!)

I LOVE what I do. I walked away having networked with some great people and a potential shot at cooking when Oxendine becomes Governor. Two days later I hosted my second “Eat & Tweet” with I Can’t Believe It’s Not Butter, then took off on a press trip to the Riviera Maya in Mexico!

I’ll be writing on both those fabulous activities as soon as I get unpacked and design yet another menu for next week.  So much to share!

On the Commissioner’s plate was a myriad of flavors and textures:

Smoked Alaskan salmon with capers and dill on Cuban crostini

Heat olive oil in large sauce pan and add  minced mushroom stems, garlic and onions and salt. On medium heat, sweat mushroom and mixture until reduced or for 10 minutes. Remove from heat and set aside in medium bowl an let cool for 10 minutes. While mixture is cooling, coat baking sheet with butter or butter alternative using a brush and preheat oven to 350 degrees. Using pastry brush, cover mushrooms all around with butter and place on baking sheet, allowing 1/2″ space between them.  Add cheese and cilantro to mushroom mixture and combine well. Stuff each mushroom with enough mixture to cause cheese to overflow slightly. Place baking sheet in oven and bake for 20 minutes or until mushrooms are cooked and browned or until cheese starts oozing. Remove from oven and serve immediately.

0 thoughts on “Cooking for a GA Gubernatorial Candidate! What Does He Like? Stuffed Bleu Cheese Mushrooms And…”