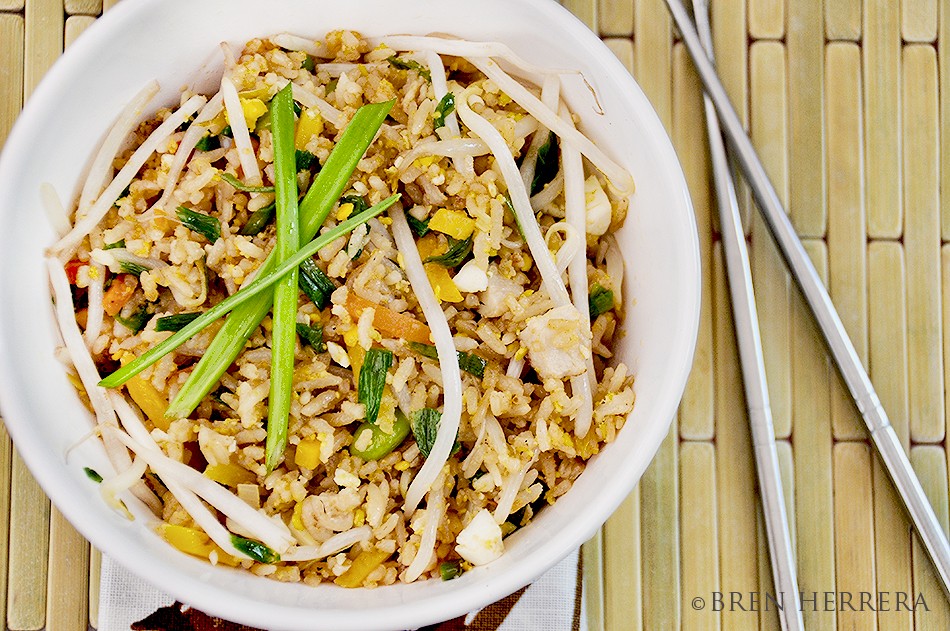 Little ancient Chinese secret: My maternal grandfather was Chinese. 2nd generation. I may or may not have mentioned that before over course of the 7.5 years I’ve been blogging here on Flanboyant Eats. What a surprise, right?! Or not, perhaps, if you know me in real life. I do recall at some point I mentioned wanting to feature more Chinese and Asian recipes on here; after all, I’m more than 1/4 china. This fried rice or arroz frito dish is one we grew up eating quite often, mostly influenced by the heavy concentration of Chinese in Havana.

The genesis of Chinese in the Caribbean and specifically Cuba date back to the indentured servants sold there back in the 1850s. After the English abolished slavery in 1833, the shortage of land workers forced a survey of other peoples that could come to the West to work. Though sugar was the biggest crop producer and the slaves were used to tend to the fields, the Chinese were brought over primarily as indentured workers, employed in homes. They weren’t as strong as the Africans to maintain the land.

The influx of the Chinese created a strong  population throughout the islands, planting seeds of their culture and traditions, including food. Rice was a common food between the Chinese and Cubans as it was so abundant. Throughout the years, as with any blending of cultures, Chinese culture was naturally adopted and certain traditions stuck. Mostly food. My grandfather owned what we call a “Chinese Laundry” until Castro’s revolution and everything was confiscated. And my great- grandmother introduced the Asian foods she knew to my grandmother. If you visit Cuba today, you’ll still see a good amount of mixed peoples with strong Chinese feasters. My mother’s are visible, mine are more watered down, but they’re definitely there. If I never thought so, I sure knew I had Chinese blood when I met my grandfather when I went to Cuba for the 1st time in ’98, many, many years after exiling.

That’s just a bit of historical context. There’s so much more to the indentured servants in Cuba story which I may reserve for a more cultural piece here later. For now, I just want to introduce you to one of my favorite ways to eat rice. I love plain white rice, but fried rice is just so good. In my research, I’ve learned is made  slightly different from how a native Chinese may make it. In fact, I’ve never even seen fried rice on any authentic Chinese restaurant, most recently enjoyed at Peter Chang’s in Richmond, VA.

Ours is a mix of certain vegetables and noting typically seen in Cuban food like bean sprouts. But that single ingredient is what makes our fried rice pretty close to the real deal. We call them frijolitos chinos: little Chinese beans. So appropriate, no?!

We also add spring onions or scallions which offer the dish a nice level of brightness and aroma. Oh, and it just so happens we’re FINALLY growing a sizable garden. I’m so excited about it and the progress we’ve had, but since I’ve not been blogging 3x/week, I’ve not had time to even add that to my editorial calendar. But, it would happen that our spring onions were our first harvest just last week! They’re probably what inspired me to finally make some fried rice to share with you.

And like most common Americanized “Chinese Fried Rice” dishes you order for take out, we add scrambled eggs. Regardless of their typical placement, I’d add them seeing as tho I’m an devout egg lover. Depending on my mood, I’ll have it the way my mother does it, but other times I’ll fry un huevo, sunny side up and let the lovely yolk seep through the rice. That’s the best. And finally, we add a variety of protein. Since I don’t eat pork or shellfish, I stick to either chicken, turkey sausage which you already know is a far cry from anything Chinese or Cuban, but it works. I may add some beef kielbasa if it’s around.

There are methods for making the best fried rice, one of which is to use day or two old rice. I’m with it. The rice is grainier the next day and makes for a great pan fry.

It’s probably one of the top 10 easiest dishes you’ll make. Saturate the cooked rice with low sodium soy sauce (or don’t salt your rice and use regular soy), pan fry your vegetables, cook your protein separately — I like to brown mine — and mix it all together in a large pot. A wok is ideal, but i f you don’t have one, a cast iron pot is great. 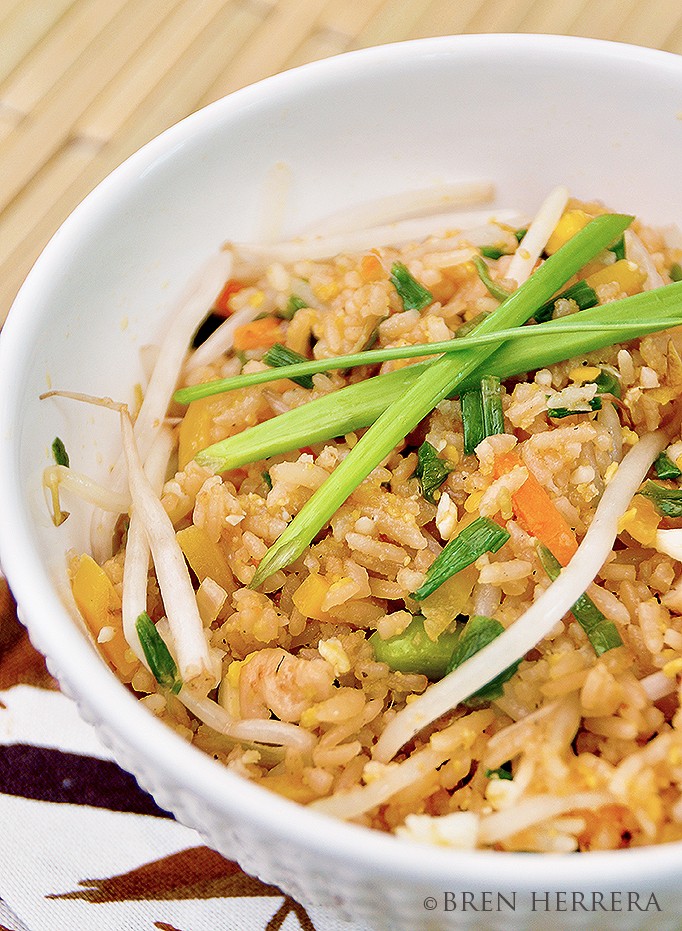 It’s not sophisticated but I’m here to share a combination of refined foods with gourmet ingredients and classic, home-cooked, food for your soul, easy food. And if has some historical context, even better. This fits the latter.

Heat 3 tablespoons of oil in medium pot add salt and cook vegetables on low heat until al dente, but not to complete doneness.  Remove vegetables and set aside. In separate skillet, scramble eggs. Cook protein in same pot you cooked vegetables in. In larger pot, either wok or cast iron (aluminum will work, too), heat the remaining oil and add rice only. Stir with wooden spoon until oil has cooked in. Add vegetables and meat and mix well. Stir in soy sauce making sure all of rice is covered and brown.  Cover and cook on low-medium heat for 20 minutes.

*Chef’s notes: This can be made vegetarian by omitting the meat and adding green and yellow pepper.