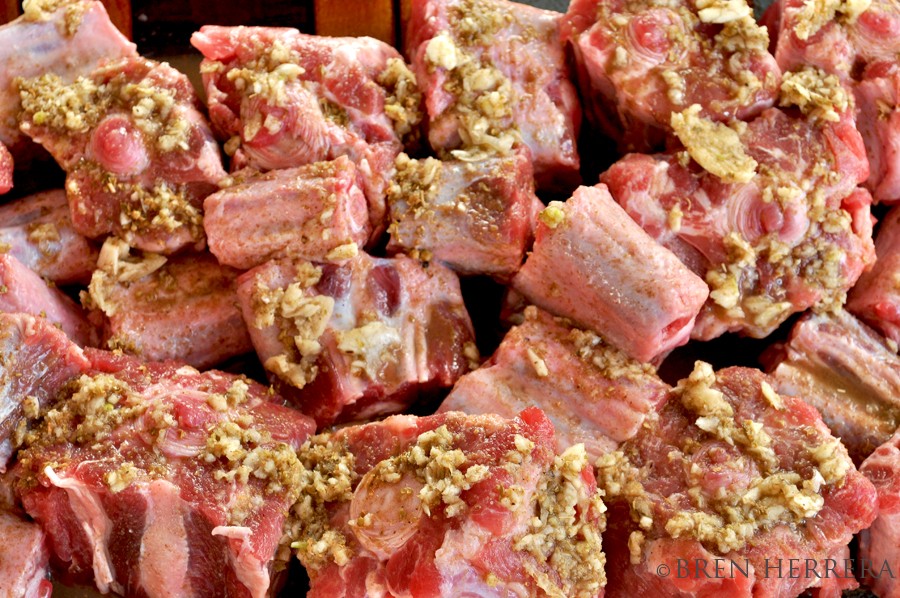 NPR News (the Florida affiliate, WLRN) stumbled upon this post and called me up to interview my mother and me about Nitza Villapol’s influnce on both our cooking —  and the drunken chicken sorry. It’s worth the listen. Check it out here.

“Sure, there’s plenty we can do today. We have beets, carrots. We can go to the market and pick up petite pois. We can make a guisado.”

That was Nitza Villapol‘s answers to her assistant’s solemn cry for ideas stemming from poor circumstances and low food inventory. Villapol, hailed as a national hero by Cubans and the Latina Julia Child by modernists like myself, was an optimist, always craving to create the next approachable dish regardless of the island’s poor and destitute reality.

Her cookbooks are mainstays in any Cuban home. I grew up watching Mami flip through ‘Cocina Criolla‘ and marking pages. I’ve chatted about that classic cookbook in a previous post. But, what Nitza is most remembered for, is her wildly successful TV show ‘Cocina al Minuto’ (Cooking by the Minute), which aired for more than 30 years, hardly believable in a Communist regime that controls everything and does little for the people.

But her show did just that; it helped the nation. Where there was despair and a sense of loss in hope and appetite, Nitza offered up viable and delicious solutions that made a difference.

I was just tipped off to this video of Nitza’s cooking show which predates Julia’s TV debut. It’s exciting to see behind-the-scenes, but the video has a gloomy undertone that highlights the plight of living in a politically choked  nation that rations food. She talks about moments in time when certain foods were sanctioned or no longer dished out. Like eggs. Or manteca (fat). The absence of those most basic ingredients gave her a clean platform to be a true teacher. She conjured up recipes to make up for the deficiency. Not all of them seem so appealing but her poetic approach and convincing mannerisms left the home cook eager to try them. At least once. The video carefully jests at these losses with fun jingles about the long gone ingredients — 50 ways to cook without eggs; or how to make sofrito with water, instead of cooking oil.

(the video is in Spanish, but I’m hopeful you can get someone to translate it for you if you don’t understand. It’s a gem!)

In its glory (if someone in Cuba could have a TV career spanning 3 decades, and where food shortages are commonplace, surely, anyone can dream BIG and have their run their own journey for their own chance) and to some level of entertainment, the 13-minute documentary actually saddened me.  I shared it with Mami, who laughed at first, as she agreed with Nitza’s suggestions, but then sank into her chair and uttered “como me recuerdo cuando no habia huevos.”

Sometime after I was born, she recalls a ration of 3 eggs per person, per month.

But the one story my mother recounts and has me both crying and laughing, is a chicken one.

This a true story I’ve heard over and over again.

Mami was 9 months pregnant with yours truly. At the time, there was a strict “law” which jailed anyone for “smuggling” food from el interior (Pinar del Rio, etc…) into Havana. If you know my Mother, you know she’s the most audacious spirit. Even at 25. She was a rebel. Traveling from Pinar del Rio back to Cojimar, and with Papi at her side, Mami was carrying one whole, live chicken in a mesh grocers bag. In order for the chicken to make it to Havana without  any infraction, Mami did what she had to. She inebriated el pollo!

We went to visit friends in Pinar del Rio, in the countryside.

They gave us a chicken as a gift. In those days, you couldn’t bring any produce or food product from outside of Havana back into the city.

My husband didn’t want to bring the chicken on the bus. In those days, if they caught you bringing food from the outside, they would fine

you. Our friend said ‘Wait, I know what to do!’

Corn and rum knocked the old bird out for the entire ride. Until Mami got queasy and asked the bus driver to pull over. She had no choice, but was reluctant for fear of the chicken coming to. Papi nudged it — more like a gentle sucker punch — one good time to ensure he was still in lala land, Mami did her thing on the side of the road, and both climbed back on the bus.

Mother, child and chicken made it to Havana without incident.

These are the things my parents and many people had to do (and still do) in order to survive.

If Nitza inspired cooks all over the island to remain hopeful and find joy in cooking, it’s no wonder she’s revered a national treasure.

The following lines in a poem by Cuban author Eliseo Alberto are apropos :

And, if necessity is the mother of invention, there is no doubt she is la madre de muchos platos cubanos!

11 months ago by Bren Herrera
﻿ COVID-19 and the 'Rona have officially taken over our lives as we know it and all our coins are going to the grocery stores! Social distancing and proper hand-washing is key to staying safe and also flattening the curve. We still have to go grocery shopping...

11 months ago by Candyce Graham
﻿﻿﻿ Short on Time! Try my at-home HIIT leg-blaster. These effective and engaging moves can be completed anywhere on the go.  Get lean and toned legs in time for the summer! Muscles Targeted: Hamstrings, Quads, Glutes, Abdominals Movements: Pop ...

70 thoughts on “Cocina al Minuto with Nitza Villapol: a Cooking Show {And a Drunken Chicken Story}”