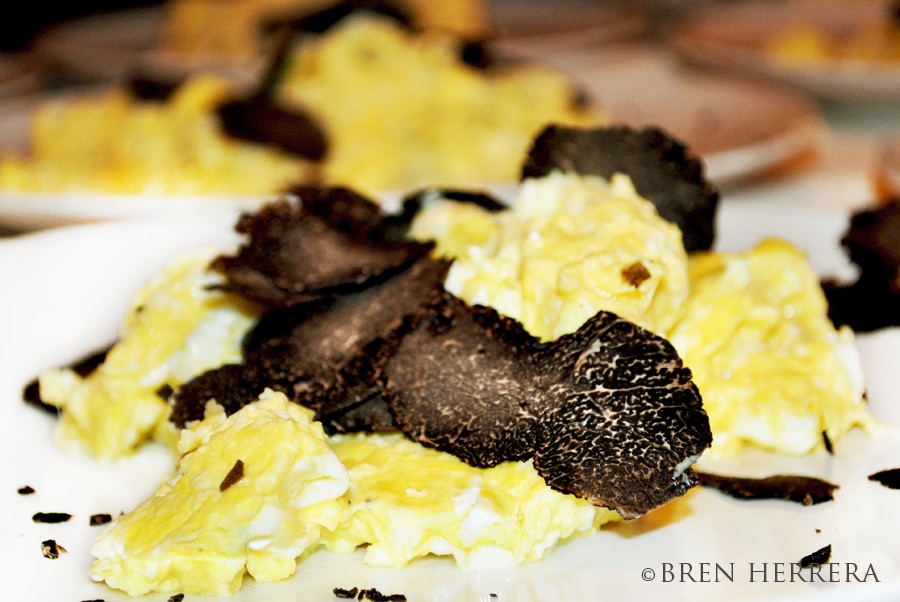 Just when I thought I had enough truffles on Day One of the Truffle Fest (mainly during the Vintner’s dinner), Saturday morning excited my parents and me with an aromatic and completely intoxicating 2-hour cooking demo presented by Chef Hayes (see him here and here and here) and Ashley  Christensen.

While both cooperatively worked to prepare a sensual and highly expensive breakfast (thank God for the appetite I had), and head gestured servers and sous to get the next ingredient or next mise, attendees asked questions ranging from new ways of hunting truffles to the many uses of truffle and their derivatives, i.e. oils, etc…

Harvesting and business questions were answered the day before during the Growers’ Forum. 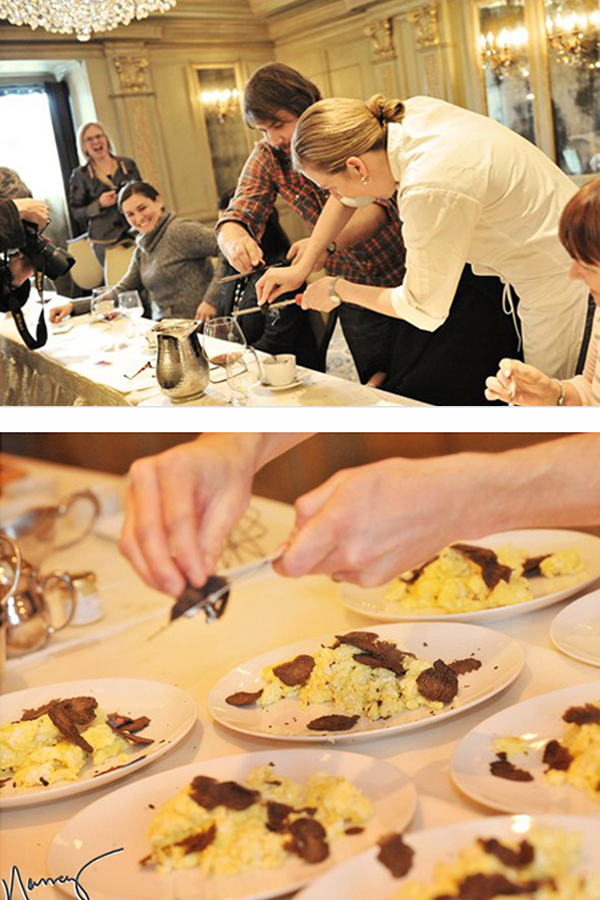 50 or so inquisitive attendees with sophisticated tasted in food made for a rousing morning.  Can you imagine this: 10 lbs of fresh truffles, truffle butter, truffle oil and truffle perfume in one standard ballroom? The glitterati clad room was befitting for the fanciful treats.

Some whole, some shaved, some in essence. Some in butter. All truffles. 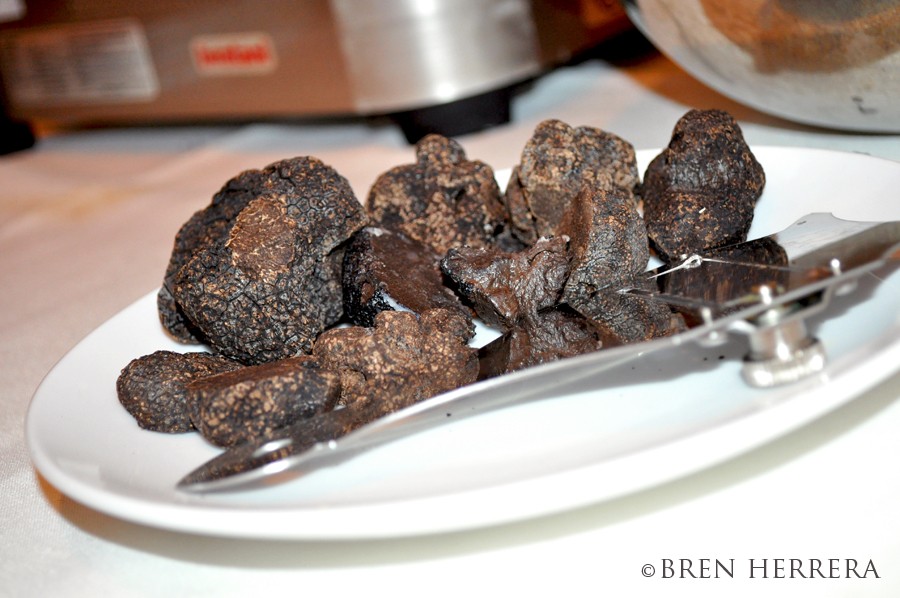 The chef duo continued to meander the room with their respective completed dishes while Amy, from Translatlantic Foods used her creamy truffle butter to make the mushroom and edamame medley which I scraped off with my fingers–far from fancy food etiquette, but if you know me, you know I don’t waste food. There was too much goodness on my miniature plate to discard.  I eventually ended up with the large platter that was used to serve guests with.  During her demo, she quietly spoke on her history with mushrooms, which is impressive, hence her published book on all things mushrooms. I believe she covers over 300 variety of the fungus; and I got a crash course on types I’ve never heard of.  The book is a must-buy. She also introduced her robust line of products including prosciutto, butters and oils.

I tried to keep my ears open to the open discussion on the many uses of truffle and the best way to store both fresh and frozen, but I was too concerned with eating scraps. Hayes continued to demand attention and explained that a slice of truffle can go a long way in most food. He also expanded on which oils, be it black or white (which I mentioned in the 1st part of this series have been found to be fake—yeah, not the real stuff we keep breaking our necks for every time we enter a gourmet shop; at least according to the NY chef that threw all of his bottles away!) are best for. He also went into the difference into using fresh vs. frozen, something I’ve become very comfortable with after having left….

Ohhhhh, you’ll have to wait for that in the 3rd installment! I’ll tell you this though: Tightly wrap your fresh truffle gem in paper towel, cover in plastic wrap, dig in a in a jar of rice and store in the freezer. It’ll last you up to one year. And, you’re rice will naturally take on the flavor of the truffle. If you’re not going to freeze your mushroom, use them within two weeks, stored in the fridge in similar manner. Not necessarily a container of rice, rather a tightly sealed receptacle.

Fresh truffles are ideal, but like any other mushroom, don’t last very long. Their flavor in comparison to other fungus is subtle yet pungent in aroma. Some don’t like it. I tend to love it. Frozen truffles are good for using in desserts, sauces, and infusions as they release a lot of water (after dethawing) and are not good for shaving or slicing into salads, pizzas, sandwiches,etc… You won’t miss the flavor complexity, but the aesthetic appeal (see heart in previous post) and texture are definitely absent.

Though the food was delicious, for the price of the ticket, the sentiment amongst attendees was the they could have allowed a more generous tasting. I passed on the pork belly. I won’t lie. It was beautiful, but I let my parents at it. 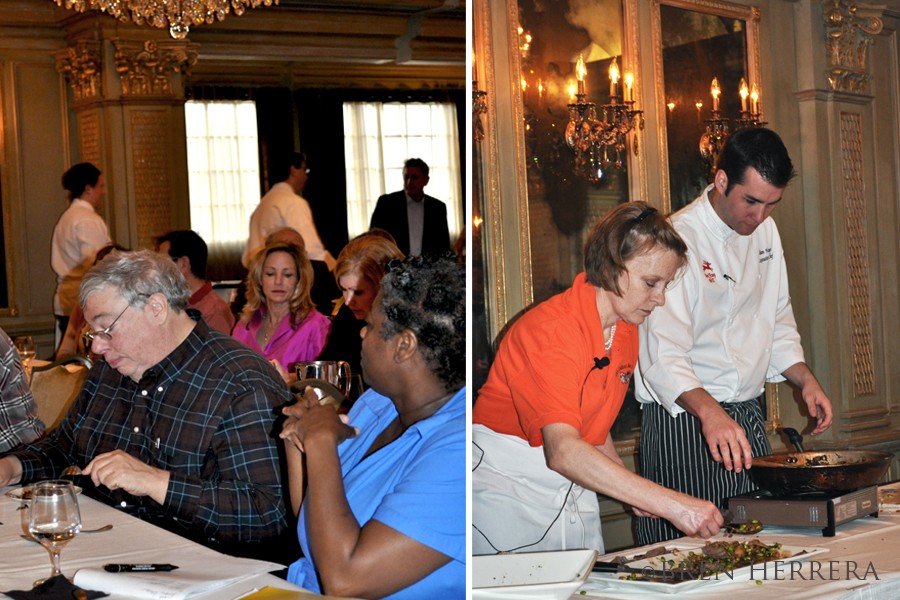 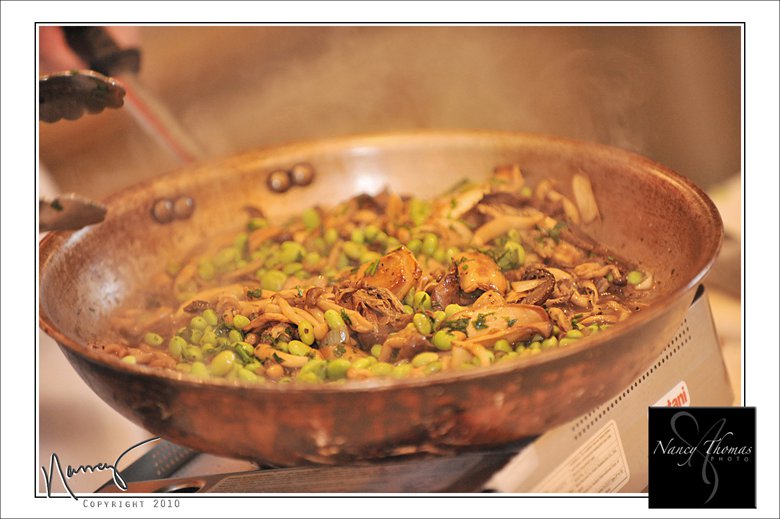 After the cooking demo, the MarketPlace was open to asking questions from the North American Truffles Growers’s Association with the option to join and buying prod from Thierry and Amy, the nice French-American couple that owns Transatlantic Foods (and whose butter is the best I’ve had).

Mami, kind of new to the idea of paying $800 for one pound of Black Perigord truffles, asked many questions to the rep whom seemed to be slightly irritated by her queries. I had to interject…see, truffles are not indigenous to Latin, let alone Cuban cuisine,  so I had to explain to said lady that the acquired taste was new for her; and my dad to a lesser extent.

One thing every festival should incorporate in my selfish and always hungry opinion, is a walking tour of the best local finds that’ll highlight the best of town’s best.

Fest organizers were smart and did just that. I mean really, how else were we going to occupy our afternoon before the Ball Extravaganza that evening? After the marketplace shut down, patrons had the option of attending the Reidel wine tasting in the host hotel, which was oh-so-tempting or join the 5-stop walking tour that featured local joints specifically infusing local truffles into everything we’d be tasting.

Mami was tired and went back to the French chateaux we stayed at. Plus, it was rainy, balmy and walking for 2 miles was not her cup of tea. So, papi and I made the transition to be outdoors.

But not before he enjoyed a stiff glass of cognac. 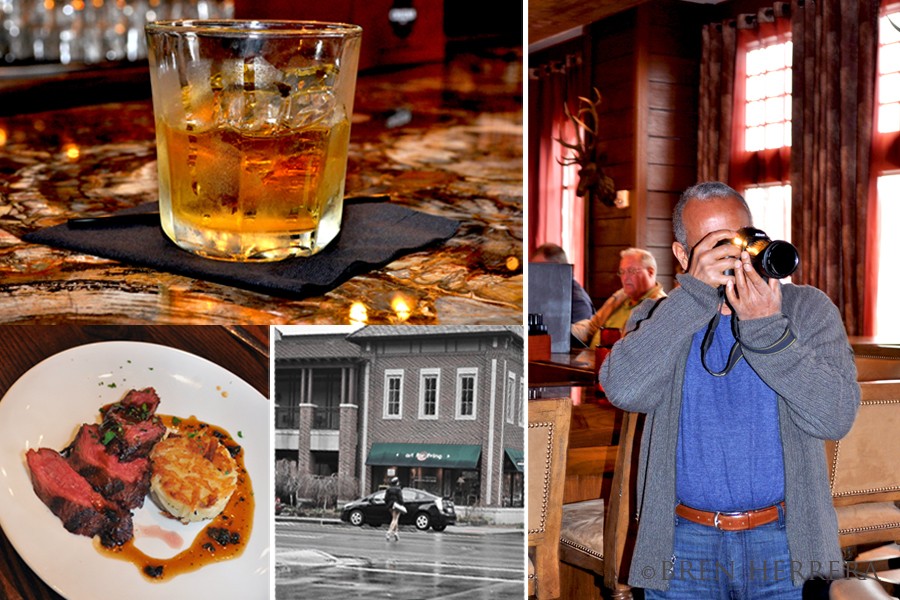 We enjoyed sirloin and potato latkes and toast slathered with black and white truffle butter (failed attempt to sneak remains into my camera bag–remember, I don’t like to waste food!), prepared by the chefs at Red Stag Grill, our first and convenient stop.

This is when I step down from my 6″ stilettos and put on ballet flats as we’re about to briskly walk about downtown… but wait, see in the pic above how I had to have a Carrie moment and run across the wet 2-way street in snakeskin pumps. Then, I could change my shoes.

The next stop was at FIG, a superbly French-inspired bistro offering us a forgettable mini tasting plate with a lovely cordial. The décor was nice and the name was suiting. 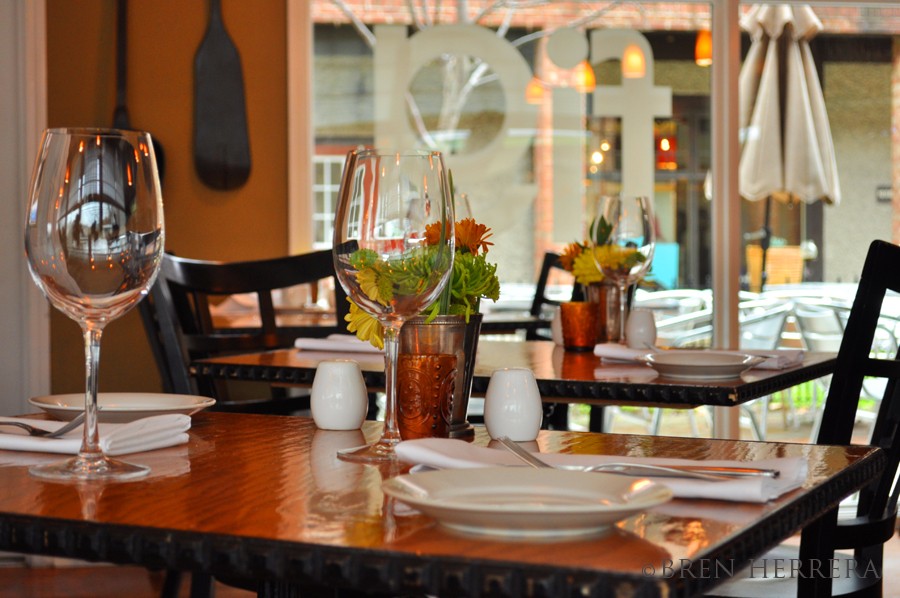 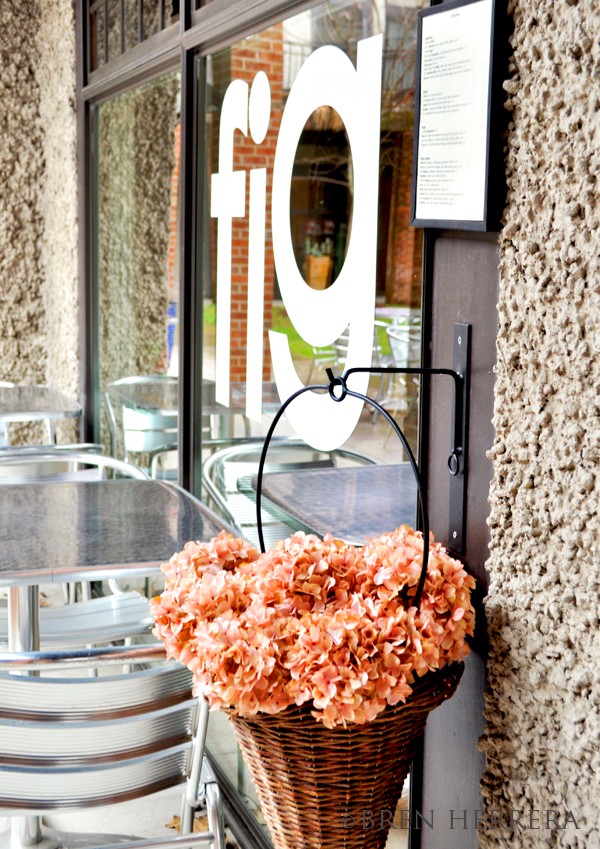 We finally ended at The Corner Kitchen–a place where everyone stops to grab a bite to eat. Even President Obama and 1st Lady Michele. They were there just last year and enjoyed some of Asheville’s favorite feel good dishes like truffle polenta and spicy shrimp skewers. Their was visit left a mark on a table and two chair now nailed with two gold plaques bearing their name… 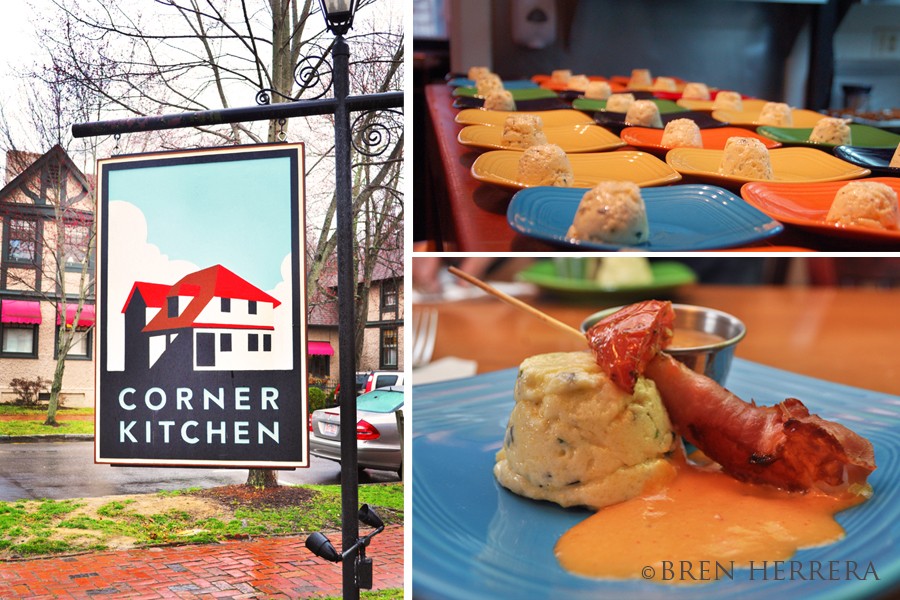 The tour guide gave us a very descriptive account of Asheville’s history, notable people and builders, historic buildings and where the city is going in the near future.

It was still wet and mushy which was my queue to walk two more blocks back to our chic chateaux. Plus, I had to get dolled up for the swanky Ball, which I was not about to miss a beat of.

What?!  More truffles presented in 20 different ways by 15 chefs!

Yes, please and thank you.

That and more in Part III of this delicious series. You def don’t want to miss that as they’ll be a lil’ surprise for you in that last series. But before that, tune into an audio podcast of me and Spain’s largest truffle grower, coming up this Friday!

* some images courtesy of Nancy Thomas Photography, including 2,3 and the soup w/wine image in the 3rd collage