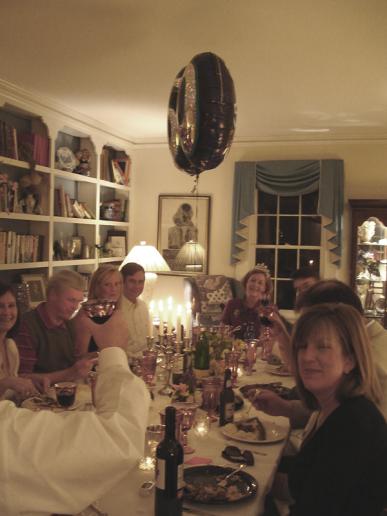 After thinking about the implications I could suffer from sharing funny details about last weekend’s dinner party, I am using my better and professional judgment and keeping them to myself.

I do want them to call me again, you know?

I will however, share my food offerings to the absolutely and incredibly wonderful group of lawyers, doctors, consultants, engineers, and comedians that know how to SHUT IT DOWN!!

I have to thank Kimberly Colvard, Ph.D (who interviewed me on her radio show re: FE–thanks K!), for referring me to D & S. D’s wifey was celebrating her 50th b-day and I put my bid in to cater the evening soiree in the antique-y Avondale Estates part of town.

I was so happy when we talked about the menu and the different things I could prepare. I don’t think they’d ever heard of anything I suggested, but I was contenta to hear them say they were fair game!

I immediately put my creative hat on and got to wondering what I could make. I’d be keeping with the whole fine Cuban cuisine theme, and since I was going to be doing everything from appetizers all the way to dessert/coffee, I had to put my best foot forward. Or, food I should say.

And of course, I had to think about what I was going to wear, since I refuse to subject myself to a fashion faux pas by embodying myself in a white and utterly shapeless button down coat…

From the 3 different menu’s, D & S opted for one of my favorite Cuban Criollo dishes: carne ripiada or some of you may know it as ropa vieja, or in English, pulled flank steak–cooked in red wine, tomato sauce and a host of fresh spices. YUM!!! not cheap at all, but DELISH!

Cooking commenced on Friday night. Pickled chicken sandwiches and my now signature pineapple guac for appetizers had to get started. AND the flank is a process in it of itself: pressure cook for about 20 mins, let cool, pull, marinade with lots of garlic and lemon and then pressure cook again. My sous chef Simone came over and pulled with me…6 pounds of this stuff took a looooong time. Longer than I cared for, but as I witnessed on Saturday, it was well worth it.

Kimberly and I made sangria and that got the party started.

BUT, right before I advised the group that dinner was about ready, D comes in the kitchen and asks to see the “steak”, right. So he makes a bee line for the oven. “Wrong”, I say…“Over here fella… In the pressure cooker”. The look on his face almost made ME want to crawl into the oven!! Evidently, he thought pulled flank steak was some sort of loin or filet mignon, etc… so when I opened up the cooker and showed him that not so pretty shredded steak, he did the unthinkable and put his hands in MY POT, y’all, and pulled out some beef! Blood was boiling at this point.

Had he not nearly fallen back and screamed “holy s***, S, this is damn good, we’re going to eat now, not in 15!”, I would have slapped his hand and made him sit in a corner ’til I was ready! Does he not know you DO NOT STICK YOUR HANDS IN THE COOK’S POT!!!

S, please tell him this for next time! 🙂

I didn’t know these people until I showed up at Sharon’s house (the kind hostess) earlier that day and took over her kitchen. So, I didn’t know what to expect from them. Especially the one writing me a check. I needed to ensure his continuous satisfaction. Fortunately, there was a sigh of relief on my face after the hand in the pot incident, and I went on my way to finish setting the table. Accompanying the seriously good flank steak, was, jasmine rice, garlic infused grilled asparagus and a mixed green salad with portabello, red onions, cucumbers, tomatoes and raisins, (I even made my own dressing which I later learned was completely spilled on the white linen covering the fancy table). Oh yeah, and some Cuban bread!

And for the kicker… yes, la madre de todas madres (trans: the mother of all mother) desserts.

Yes, yes my friends. Don’t be jealous. Thanks to my friend Michael, who does PR for Chalmer’s, I had 2 large boxes of Chalmer’s Mint Chocolate Ganache donated for the VIP goody bags I gave out at my annual charity event. I had to keep one (or two) for myself… you know, for good measure. This stuff is to be reckoned with! Damn it’s good! I hadn’t the slightest clue what to do with them (other than to eat right out of the jar with my fingers) until last weekend when my creative juices started gushing. D insisted on having a chocolate dessert for S.

I got innovative and came up with this really cool idea for a flan. I consulted with my mother who said go for it but make sure I taste it first. Yeah right! When the first one was done, it was way too pretty to cut so I prayed to the food gods and hoped it would turn out all good. Made the 2nd one and called it a night.

At the dinner party, clad in my black lace cha-cha tiered skirt and pink silk bow top with bad a** Max Azria cream pumps, I femininely garnished the flans with fresh mint I’m growing at home and made a brandy sauce from some left over ganache. Swirled with the natural caramel sauce the flan yields, the brandy sauce was orgasmic!

Texture, taste, color, look, TODO! Everything was perfect. I had a slither and was oohing and ahhing…smooth center, pretty brown complexion, a few perfectly placed dimples, plump and juicy (sounds like an old ex of mine)! Friends, I AM on to something here. The client was happy and I was yet again, relieved!

After a long day and night of hanging out with a great group of 6 couples (politiking over 12 bottles of Spanish Rioja and queries on my ethnicity and profession), I was done. Done with choppin’, pressurizing, sauteeing, whisking, grilling; you name it.

But, thoroughly gratified that something so last minute and totally untasted, worked so well. And, that I introduced 12 more people to the food I am so passionate about!

I will be making this flan again. And if you do, please, please do give me credit and tell me how it was! It might even make it to the book 🙂

(Latin music playing in the background, the party people are clearly happy!) 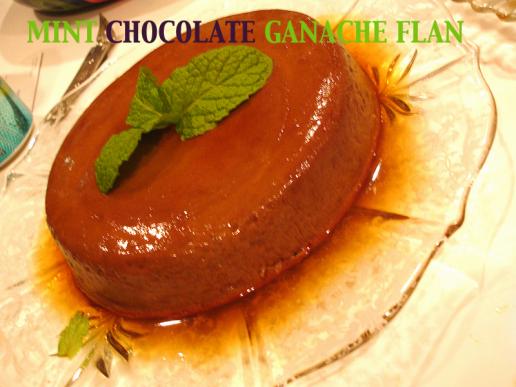 RECIPE HAS BEEN DELETED DUE TO PUBLISHING PURPOSES. SO SORRY.

**Other Related Posts of Interest**: