Dominican Mangú and a Typical Breakfast

If you follow me on Twitter and Instagram, hopefully I enticed you with my Caribbean ventures the past 10 days. I was in Puerto Plata, Dominican Republic doing some social media work with a few other bloggers and writers. Since I straddle the fence in the writing realm and professionally work as a writer/journalist first, I stayed a few extra days to cover and document some excursions and facets of the island.

To say I didn’t have fun on a working trip would be a lie, but my Cuban a$$ grounded to an extreme point of oblivion. I have muy detailed experiences to share with you than I can’t possibly process right now but have tentatively scheduled a 3-part series for later this year. In the meantime, I have to share  some of the food that caused a daunting 3# weight gain in that short week. I wanted to indulge in everything Dominican cuisine has to offer, but our schedule was somewhat limited. I was cornered to eating resort food, mostly, but ventured out to the downtown area to taste some street food on my last day. I had to get all up in the local kitchens and see what the staple dishes are; what makes their food different from Cuba’s, their neighboring Latin Caribbean island.

I learned many years ago of mangú, or mashed plantain. Not having actually had it, I assumed it was much like our fufú — a sweet plantain mash and my default option. Was I wrong. Since no one had ever specified the variety or ripeness of the plantain, it was safe for me to put it right with our version.

I quickly learned on our first day in DR that mangú is the national breakfast dish. It’s eaten by everyone and everywhere. Though it originated in el campo and mostly eaten by the poorest islanders, it’s remained a dish that doesn’t divide the classes; not that that really exists in the modern day.

Every breakfast I enjoyed at the Gran Marien all-inclusive resort was healthy and full of heavy and typical foods, principally the mangú. Not your everyday hotel food with weak scrambles and watered down café. They laid it out! Visitors, both local and foreign lined up to attack the chafing dish of mangú like it were the last of crispy bacon! I was stunned. I should have figured so when I heard fellow Latina blogger, Carol from NYC Mama,  hoot and holler about needing her mangú in order to stay fit for the intense excursions we had planned. She got lucky and indulged like the rest of us. She was right. Complete energy food!

Traditionally, mangú is made with a green plantain; the less starchy, unripened one. However, I was told it’s also made with smaller and thinner platano called guineo. That one’s also very green. I’ve not seen it here in the States, so I’m going to go ahead and say it’s okay more common to make it with the regular plantain we all know and can pick up in our mercados. Mangú is on the more savory side and seasoned with tons of onions and dices of green and red bell pepper, olive oil or butter. It’s pretty basic. Nothing complicated or fancy. Just plain good soul food.  It’s served alongside a hodgepodge of other foods like fried salami rounds and other meats. I enjoyed it most with incredibly juicy roasted Roma tomatoes and boiled banana (possibly guineo) in a sweet and musky thick sauce and topped with chunks different fruit. I’m not a fan of watermelon, but it paired nicely with the warm dish. 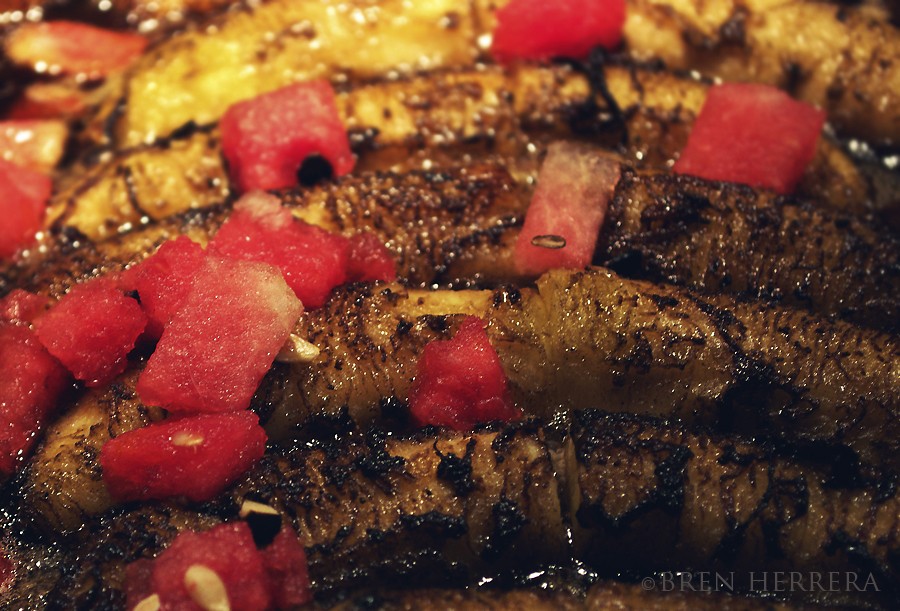 Legend has it that mangú got its name like this: an American soldier on the island was visiting a local home where he was served this mashup of platanos. The soldier liked what he ate and proclaimed: “Man, good!”

Not sure how true it is, but it works. It just so happens to also corroborate with how Cuban fufú go its name. I’ll save that for later. Don’t you love learning the etymology?

I’m a fan… I’ll just have to make it for myself and play around with it. I’m thinking it may actually be nice with a great cheese. We’ll see. Enjoy this staple Dominican breakfast and then say you had an authentic experience of eating good, good Caribbean and Latin food!

Stay tuned for that 3-part series on all things Puerto Plata, DR. So much going on up on that north shore!

Once the plantains are peeled, for quicker cooking, I cut them in half, then, slice each half in the middle (to get 4 pieces from each plantain). Once all plantains are peeled to in the water (it’s ok if the water is not boiling yet), cover and bring to a boil. When the plantains come to a boil, add a generous amount of salt (a tablespoon is about the amount I add). Let the plantains boil until they are fork tender (about 20 – 25 minutes). Drain ALL of the hot water. While the plantains are hot, add the butter or margarine (I prefer to use margarine), then add the olive oil. Then add the salt.  You may adjust the salt level, but I’ve made this recipe too many times to count and I think that 1 tsp is the perfect amount.

Now, mash the plantains (don’t add the water yet), this is just to ensure the butter (or margarine) melts and to dissolve the salt as well.

After mashing briefly, add 1/2 cup of Cold water (NOT HOT WATER), don’t ask me why but adding cold water makes the mangu really soft and if you put it in the refrigerator then reheat, the mangu is not hard.  It’s an old trick that has been passed down by generations and most of the seasoned Dominican cooks I know mash their mangu with cold water as well (same way my mom taught me).

After adding the water, mash some more until the mangu is thoroughly combined.  If you are finding that your mangu is still very dry, just add more cold water.  Add 1/4 cup more at a time, for me a 1/2 cup is the perfect amount because you don’t want watery mangu.  After mashing for a couple of minutes, see how soft and creamy it gets.

One of the most popular items that mangu is paired with is sauteed onions and fried salami (there is even a song dedicated this dish called “platano con salami”  ). If you prefer to serve it as a side dish  and omit the onions, it works well with meat, eggs, veggies, cheese, etc.

26 thoughts on “Dominican Mangú and a Typical Breakfast”