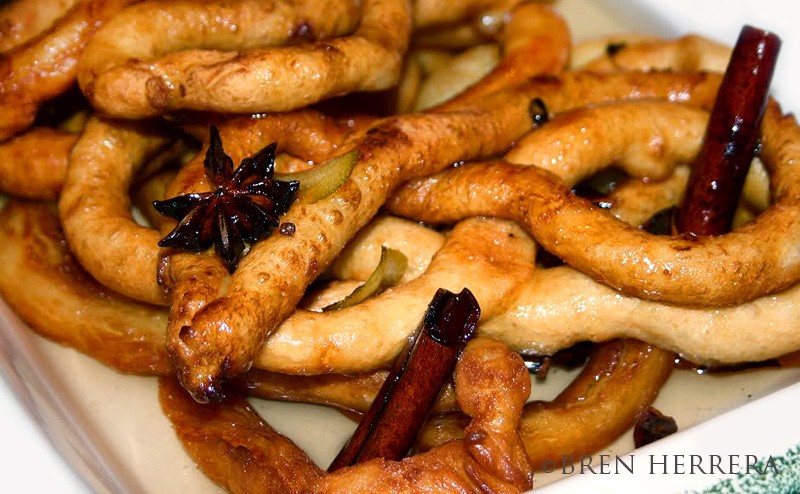 One of the best things about the holidays, other than seeing family and friends, and eating great food, is reconnecting with certain dishes and recipes you’ve lost touch with. In my case, there are plenty of foods that fall into that category. How that happens in a culture where everything happens in the kitchen, is beyond me.

How do you keep up with all the food there is to eat, cook, learn to cook, try, and re-incorporate into your “diet?”

I think talking about recipe organization and prioritization is a whole other post in it of itself. So, I’ll gather my thoughts and points and work on that one for a later date.

For now, let me introduce you to beignets, or buñuelos, as we call them. These globally loved doughnuts are something I remember eating as a child, but have no recollection at what point Abuela or Mami just stopped making them. Prior to making them for this post, the last time I remember having one, was about 13 years ago during a visit to Miami, where my paternal grandmother’s brother was making them from scratch.

I stood in complex amazement of how he made the dough, moreso the ingredients he was using to make them, and then how he meticulously shaped them into mini size 8s.  Clearly, I wasn’t cooking professionally at the time. I was so giddy and couldn’t wait to dig in; acting more like an adolescent at an amusement park, so perhaps it was more than 13 years ago.

Oh yes, it must have been!

A few days before Christmas, Mami and I got really hyped up about cooking different things. She’s been more and more intrigued by the non-Cuban dishes I prepare for my clients, and I’ve been more and more interested in going back to solid, traditional Cuban food, 3-4 generations back. We started talking and decided on a few dishes to tackle together. 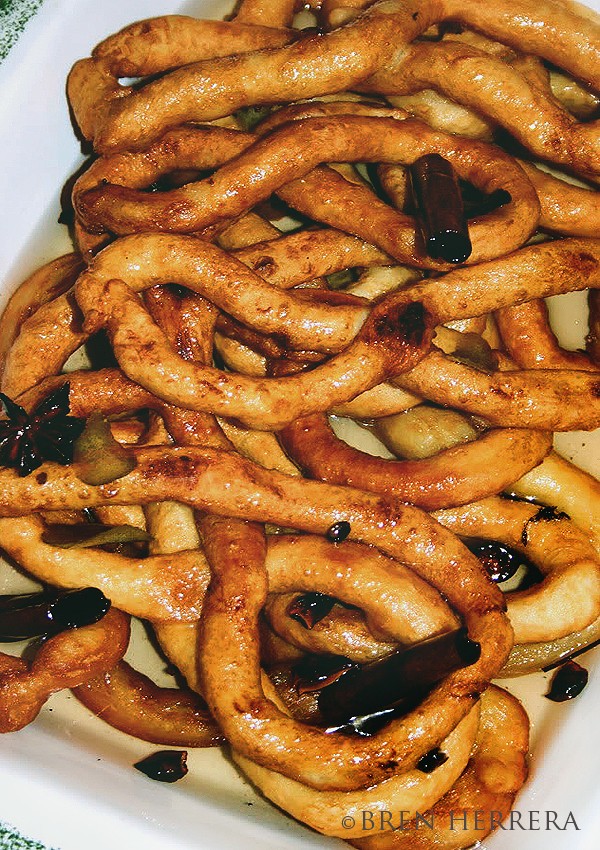 So on a cold afternoon a few weeks ago, we decided to take a stab at making these figure eight Cuban luvies. After 2 hours of table-talk-turned loud debate over which was the right recipe, we finally agreed on one, which was more or less a combination of 4: grandma’s brother, my cousin’s aunt, some Cuban website, and my mother’s own creativity and determination to make it our own.

Our Cuban beignets are primarily made of starchy vegetables! Imagine that. Yuca, my all-time favorite tuber, malanga, plantain, Cuban white sweet potato (boniato) and other vegetables can be used and combined to make the dough. Eggs and butter, no doubt, are part of the equation for some.

We limited ours to 2 main vegetables, though I’m putting plantain in my next batch. We figured too many elements would take a way from the intensity of the intended flavor. Of course, you can play around and get all messy, if you’d like! 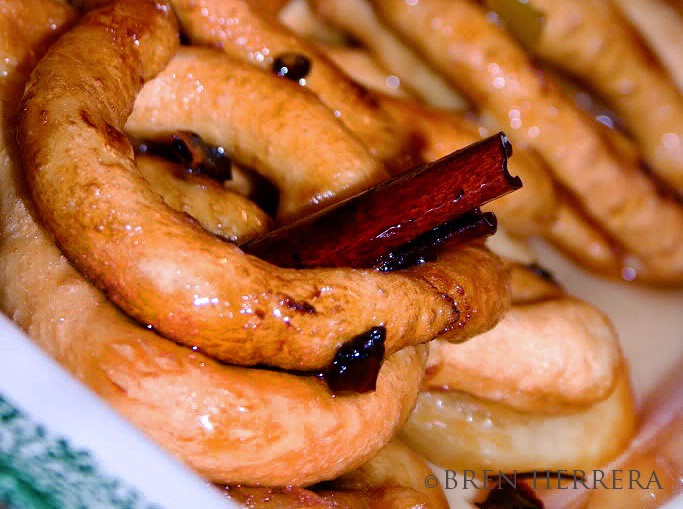 ALERT: This recipe is not for the lazy, the cheater or the one that takes short cuts. It’s a tedious recipe of ratios. Michael Ruhlman would love to apply his theory to this. It’s a must. One too much of a single vegetable, then it becomes either too sticky or gooey. Another thing–these Cuban buñuelos are topped with a most juicy almibar, or honey sauce made with star anise and cinnamon sticks–two of my favorite spices. The ratio aspect applies here as well. Too much sugar or not enough water will mess up the desired consistency.

So, proceed with caution and fun!

The most important thing about these buñuelos is the light crisp factor: not too crispy like funnel cakes, but not too soft like flan. And, if made right, a few won’t even make it to to the final stages of adding the syrup! You won’t resist. Okay wait, I’m lying. The syrup is really the icing on the cake on these eloquently shaped doughnuts!

This stuff what right here is guaranteed to get you long and over-due accolades, make you a star home baker, and a connoisseur of other Cuban desserts.

How could any of that be bad? Even if it takes you two hours to make?!

And lastly, how could something this sinfully divine have escaped our making for over a decade! Cuban nationalism now re-instated, thank you very much! 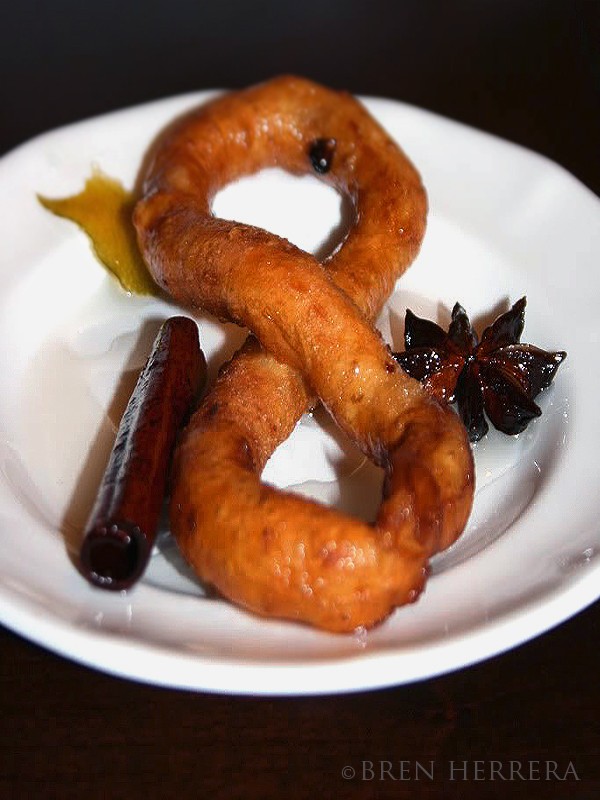 Finally, here I am on ABC Action News in Tampa, talking up all their glory.

* Note: this post was originally published on Jan. 19, 2010. I was inspired to update it after a CBS producer in Tampa found it, made it, and emailed me a few pictures of her mother and she making them as a way to remember her late grandmother whom hadn’t left the recipe behind. This is now her second Christmas making them and letting me know. This is the beauty of sharing our beloved recipes — that someone else is able to enjoy them and remember someone they love while at it! Tis the season.

Bring water to boil. Peel all vegetables and cook en in boiling water until softened, but not too tender where they fall apart. Drain and let cool. In large bowl, mash up all vegetables using masher or your bare hands. Beat egg and add to vegetable mixture, anise, salt and flour. Mix well until mixture does not stick to your hands and becomes a nice dough. Place dough on wax paper. Take half palm full’s  amount of dough, roll into a 6″ long link. Shape  into 4″  high number 8 figures. Using a deep fryer or 6 qt non-stick pot, heat oil on high or 350F. Using tongs, place shaped buñuelos into either pan and fry until golden brown and  bit crsispy. Transfer onto serving plate. Pour rum all over buñuelos, then pour syrup (recipe to follow) and drench entire pan of  Cuban doughnuts!