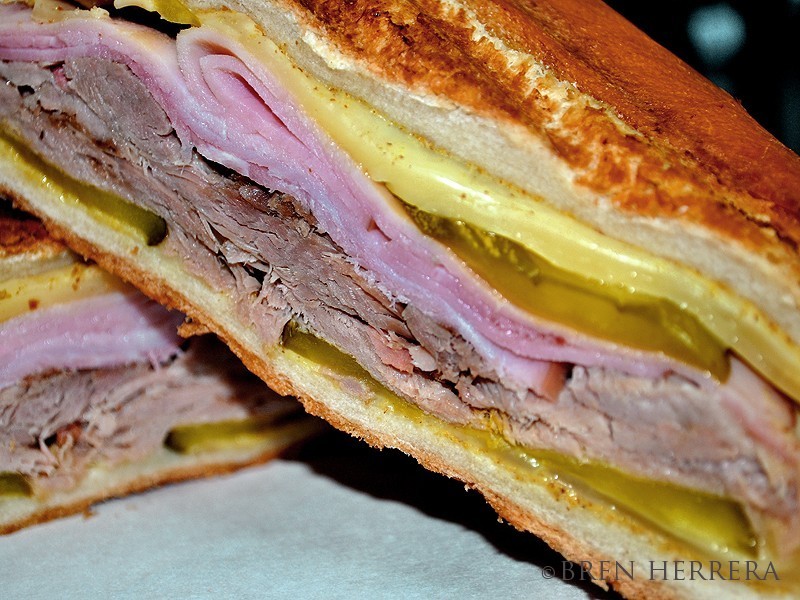 When I got cast to be on Emeril Lagasse’s show “Emeril Green,” it was based on his shock factor that a Cubana like me doesn’t eat pork. He was short for words, but he accepted my reasons for not eating it. Strictly religious. He still insisted on getting me to learn all about the hog and its “delicous” parts.

So we went on and taped and had a successful episode the night Planet Green (owned by Discovery Network) premiered. If you’ve not seen the episode, you can see it here in its entirety (w/out commericals).

I’ve not touched pork since cooking with Emeril. He’d be so disappointed because he really thought he converted me. After all, the hamhock beans I made were damn good. Yes, I did taste them and yes I said so on camera.

Nothing’s really changed in my pork eating life. I don’t do swine and interestingly enough, none of my clients have ever requested a pork menu option. Don’t know if it’s luck or they just don’t want me messin’ with it. Either way, ‘Thanks clients for not asking!’

Since it’s well established, well beyond words that I don’t eat anything from the “roota to the toota,”, I thought it wouldn’t hurt to at least talk about the beloved and one of the world’s most famous sandwiches: El Cubano or the The Cuban Sandwich. Saturated, packed and oozing with pork and ham, this sandwich has made it’s way into many a cultures and into many non-Cuban bellies.

Even yesterday when I made it!

The History of the Cuban Sandwich.

There are so many accounts on the genesis of the sandwich, but there is always only one truth, right! I’ve heard it originated in Tampa. Wrong. Way wrong. Borderline insulting. Sorry Bucks. El Cubano was created in Cuba back in early 1900’s.  Pork, being the cheapest and most available meat on the island, explains the protein basis. It was however, popularized in Tampa back in the early part of the same  century by factory (fabric and cigar) workers that traveled to and from La Habana to Florida. It was easy to travel then and the sandwich is what the daily workers would pack with them. Havana and Santiago de Cuba were the two cities where you could readily find the sandwich– offered in cafeteria’s, corner bakeries and served at home for lunch.

In Tampa, most restaurants use Genoa Salami for the ham portion–a reflection of the Italian influence in Ybor City.

Any Cuban will debate you on how to make a Cuban Sandwich. There are varities, as with everything, but an original Cuban sandwich only requires bread, roasted pork, ham, Swiss cheese, pickles and mustard (butter is optional). NO REAL sandwich will ever have mayonnaise, lettuce, tomato, onion, etc… it’s an essence a delectable and gourmet ham and cheese sandwich. The sandwich is always eaten right off the press.

A Media Noche is a variant of the Cuban Sandwich, which I’ll indulge you with at another time. 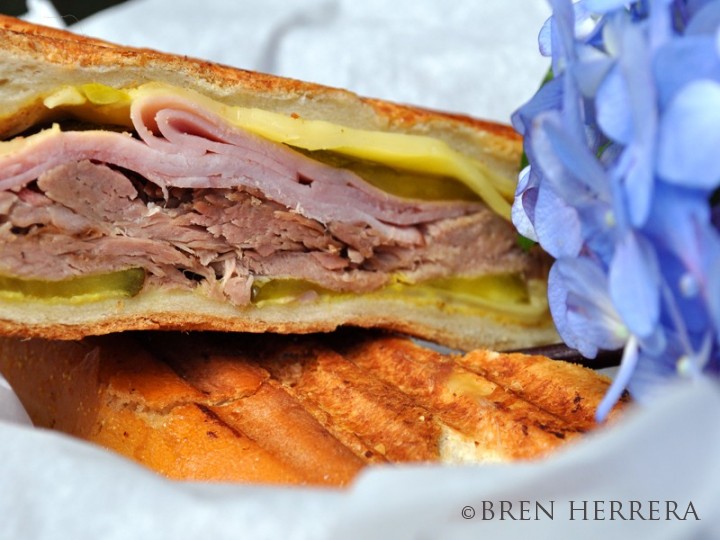 I was determined to experience the hype for myself; even if it was just about going on the hunt for fresh pork meat and selecting the perfect sliced ham.  Wait, let’s be clear here. I DID grow up around this sandwich, and have in utter amazement,  watched and heard adults groan when they bite into this delicia… I’ve seen many sandwich shops in Miami with Star Trek type lines for a sandwich and un cafecito. The best ones are always found in loncherias or rapiditos (Cubanized fast food joints)

In D.C., few places offer el Cubano, and even less posts in Atlanta can claim making an original and authentic sandwich. Some of my friends rave about a certain Cuban spot having the best one in town; but I can’t speak to it. I can assume it’s pretty good if a 1st gen Cuban is making it. Because I’ve been asked for so long to make one (I think as a stealth test of my true Cubanism), I finally decided to take a stab. 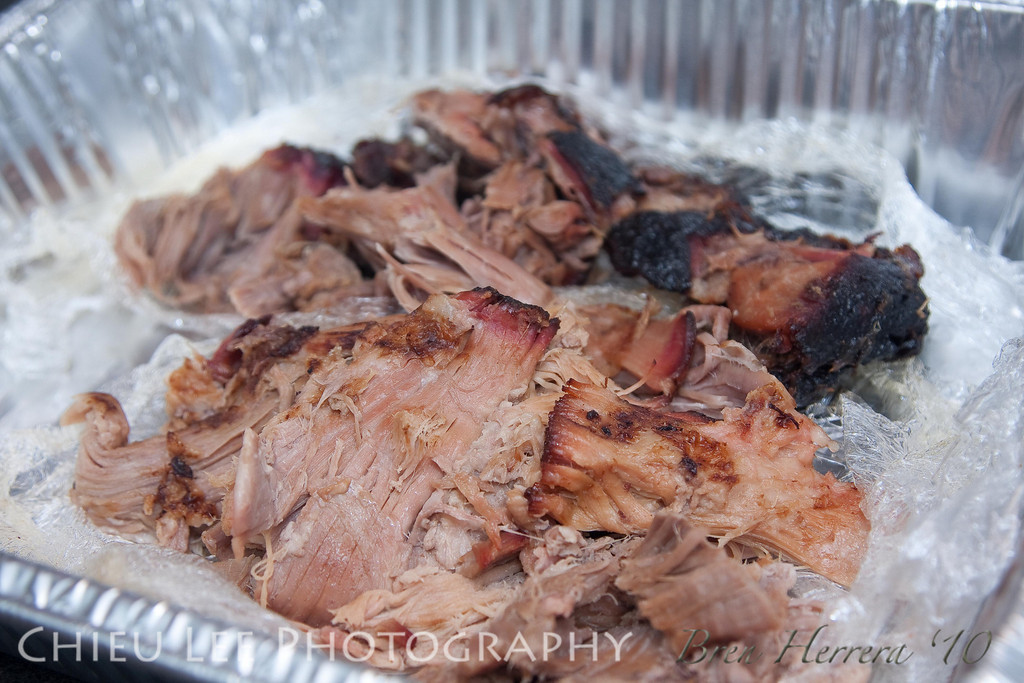 I called my friends over at Jim-n-Nick’s BBQ restaurant (an awesome place for smoked brisket and the birthplace of my own cocktail) and asked the owner for some fresh smoked roasted pork, one of the main ingredients in the sandwich. I rolled on over there in flip flops and a very Havana-esque mini dress (totally ironic) and he excitedly greeted me and immediately took me into the kitchen.

This guy! He pulls out a piping hot shoulder and starts “schooling” me on their smoking process. 18 hours of slow-cooking in the pit. I don’t know what it tasted like, but the look of it sure made it tempting to pull with him! He pulled the charred skin back, grabbed the rendered fat off, pulled out the big chunks of bone and started pulling the meat.

No lie. Pretty and aromatic. He tells me they season it with paprika, garlic powder and a few other spices and herbs. I wasn’t planning on getting a 20-minute session on smoking and pulling pork, so I didn’t have my camera on me.

I happily left the joint with about 20 oz. of freshly pulled pork. SCORE.

Picked up Cuban bread, mild semi-soft Jarslberg Swiss cheese (which is amazing–and I hate Swiss) and Boar’s Head Black Forest smoked ham and Kosher pickles—all the necessary elements of el sándwich Cubano.  I would have made my own bread, but I was so anxious to get this thing done, buying a loaf was the way to go. Plus, the local market has an original recipe (I’ve seen it!) and it’s good.

You know I wasn’t going to eat the sandwich, so I called my friend Chieu to come over and watch me make it; and play taster, too. She’s a major foodie and just happens to be an incredible photographer….

I mise’d everything and went to work. This is when I get to play. I’d been waiting to pull out my spankin’ new bread knife by New West Knife Works to specifically cut into this thick loaf. The sharpness of the cuchillo is to be reckoned with. Sheesh. I’ve worked with a number of phenomenal knives, but this Japanese style beast couldn’t have yielded cleaner cut sections of the bread. Needless to say, the knife if perfect for carving, too.

Had I been adventurous enough to cut my own whole hog, I would have easily used the knife to do the trick. 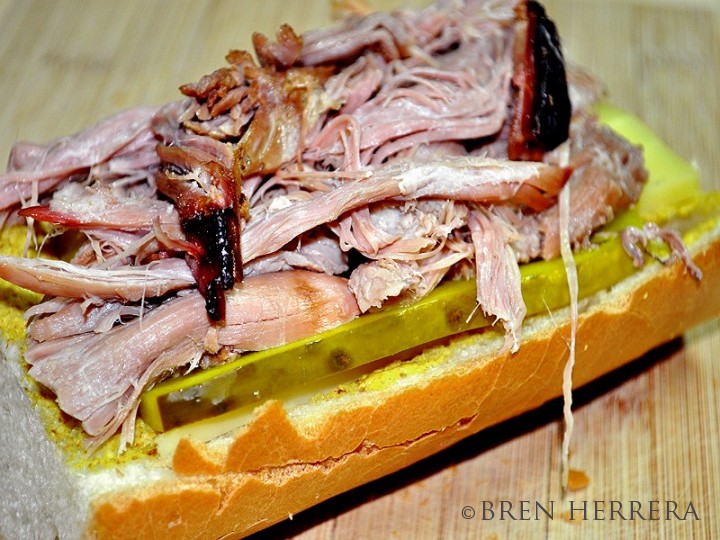 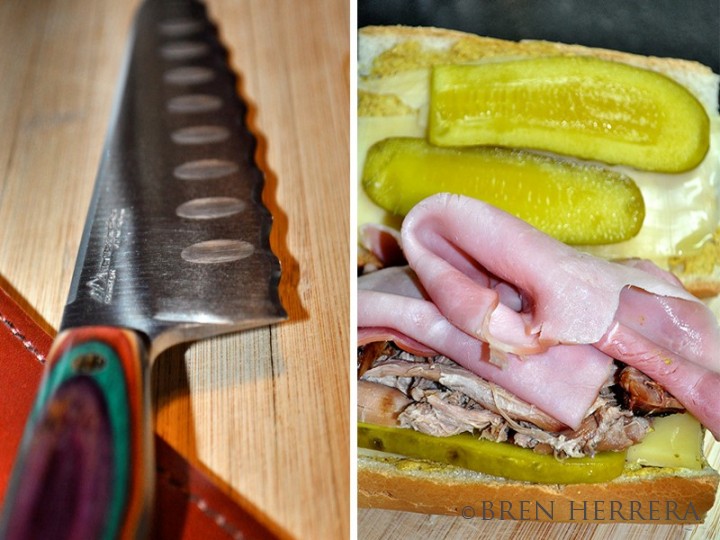 The fascination with the sandwich is two fold: where it originated and the on-going debate among any Cuban on how to make it right. At the end of the day, the trick on making a really good sandwich befalls on how you grill it.  It has to be pressed using a plancha, or grill press. Timing, as with most foods, is of the essence. The pressing allows for the bread to toast with pretty grill lines and for the juices and flavors of the pork, ham and cheese to infuse without burning or dyring out the meats. You definitely want to melt the cheese, so ensuring each side is grilled long enough, is key. Another key point is the pressure of the press. Ultimately, you want the sandwich to become a panini of sorts, being flattened thinner than when you first started out…

Surprisingly, I don’t have a plancha, though I was going to buy one just for this rare occasion, but I decided to go all out Cuban style and get creative. I have tons of brick laying around–a perfect weight. I wrapped it in foil and used that as my “press”  on my stovetop grill.

Lastly, cutting your 8″-10″ sándwich into two diagonal pieces is what you will lust over.

Chieu kindly photographed as I pressed, sliced and plated.

I watched her eyes open and slowly bite into her first ever Cuban sandwich, which by the way was made my style (a special mustard mix and buttering method). She took the other half to her husband and in exchange shared her awesome shots (denoted with her watermark).

For the full recipe and step by step instructions on how my make this beautiful and DELICIOSO take on a Cuban sandwich, where I’ll share the secrets! For now, feast on the pictures and the slideshow below. Pretend you’re eating this sandwich with a gorgeous fedora, a stogie and a nice, robust shot of Cuban espresso! 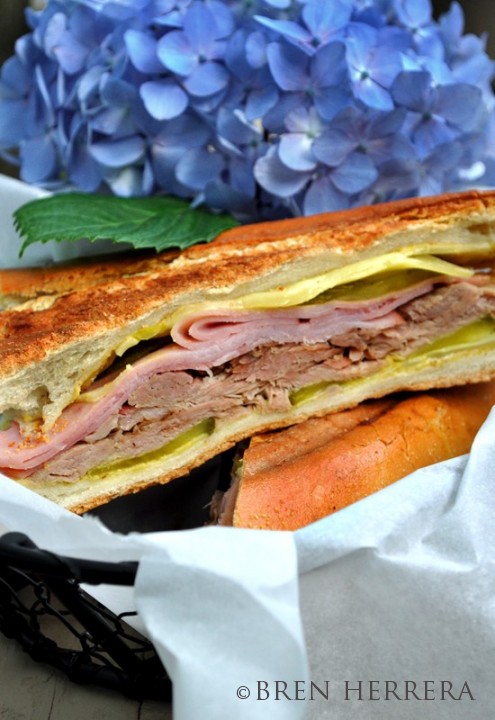 You can’t get any more Cuban than this!

* side note: because I don’t eat pork, I’m so excited to get creative and start making new versions of the popular sandwich, something I hear is already happening in Paris! Stay tuned for those culinary creations.

* all pictures with the Chieu Lee Photography stamp (and mine) were taken by her awesomeness. All others and with my mark only, were shot by me! Slowly, but surely, I’m getting there!! 🙂 People like Chieu make it fun to learn how to use my new Nikon D5000! Thanks, girlie.

WHERE HAVE YOU HAD YOUR BEST CUBAN SANDWICH! I WANT TO KNOW!!

Using a bread knife, cut Cuban bread in half. Spread mustard on each side of bread. Start stacking. Add cheese and 2 pickles on each side.  Add pork on one side and top with ham. Place other half of bread on top of stacked side. Using a stove-top grill pan (unless you have a plancha), butter the grill pan and both sides of the sandwich using a pastry brush. Turn heat to medium. Use another heavy kitchen utensil (a foil-wrapped brick is a great option), press down on sandwich, and cook sandwich one each side for 5-6 minutes, allowing the flavors from the cheese, pork and ham to infuse and for the sandwich to flatten down ¾ from its original size.

143 thoughts on “"El Cubano!" The Almighty Cuban Sandwich & An Amazing Knife With Recipe”