My life has been a whirl wind of serious downs since December. The entire Christmas and New Year season were extremely somber, spent very quietly, with intimate solo moments of reflection and spiritual growth. I was desperately looking forward to the beautiful things and new journeys a new year has always brought me. Last year  has been the best to date. But this year — not so much. I already expected work to start off a bit sluggish, and sure enough it did, but I was prepared. But what I was not armored to take on was learning of three girlfriend’s passing in one week. Well, learning of their passings all in the same week, a new one each day, the very last week of January.

A certain Tuesday morning 3 weeks ago tomorrow, which started happy pappy with breakfast and kitchen sink chatter with Mami instantly turned into a outcry of shock. A dear, sweet friend had died in a tragic accident in Monaco in mid-December and I had only come to know that morning. I was in disbelief. I’d love to tell you more about her at a later time. Her death is really heavy on my heart, still. I suppose that pain never really goes away.

But it just got worse, but we’ll try to liven this story-telling up a bit. Leanne of the vibrant food blog Elle’s New England Kitchen, suddently died the very day I got news of my French friend. God spared me a double whammy, so I, along with everyone else who knew her, didn’t hear the crushing news until Wednesday morning when her daughter spoke on behfalf of her family via Elle’s Facebook account.

I met Elle in 2008 through this space. A space in which I never in one thousand years imagined would help forge such lovely relatiosnhips and true friendships. I say “met Elle,” because tho while I never saw her face in person, or online for that matter — what I now know was as sweet and even more gentle than I could imagine ( I had this rebellious, rocker-type image in my head) — I made a genuine connection with her. I was always intrigued by her avatar profile picture, trying to visualize the real person behind the caricature. But that didn’t hinder any ideas of who she was. We engaged almost daily there, always on a good, positive note. I admired her passion and love for little animals and love for football. Her comments and status updates were always funny, sometimes provocative, but always intentional. She had a purposeful voice. 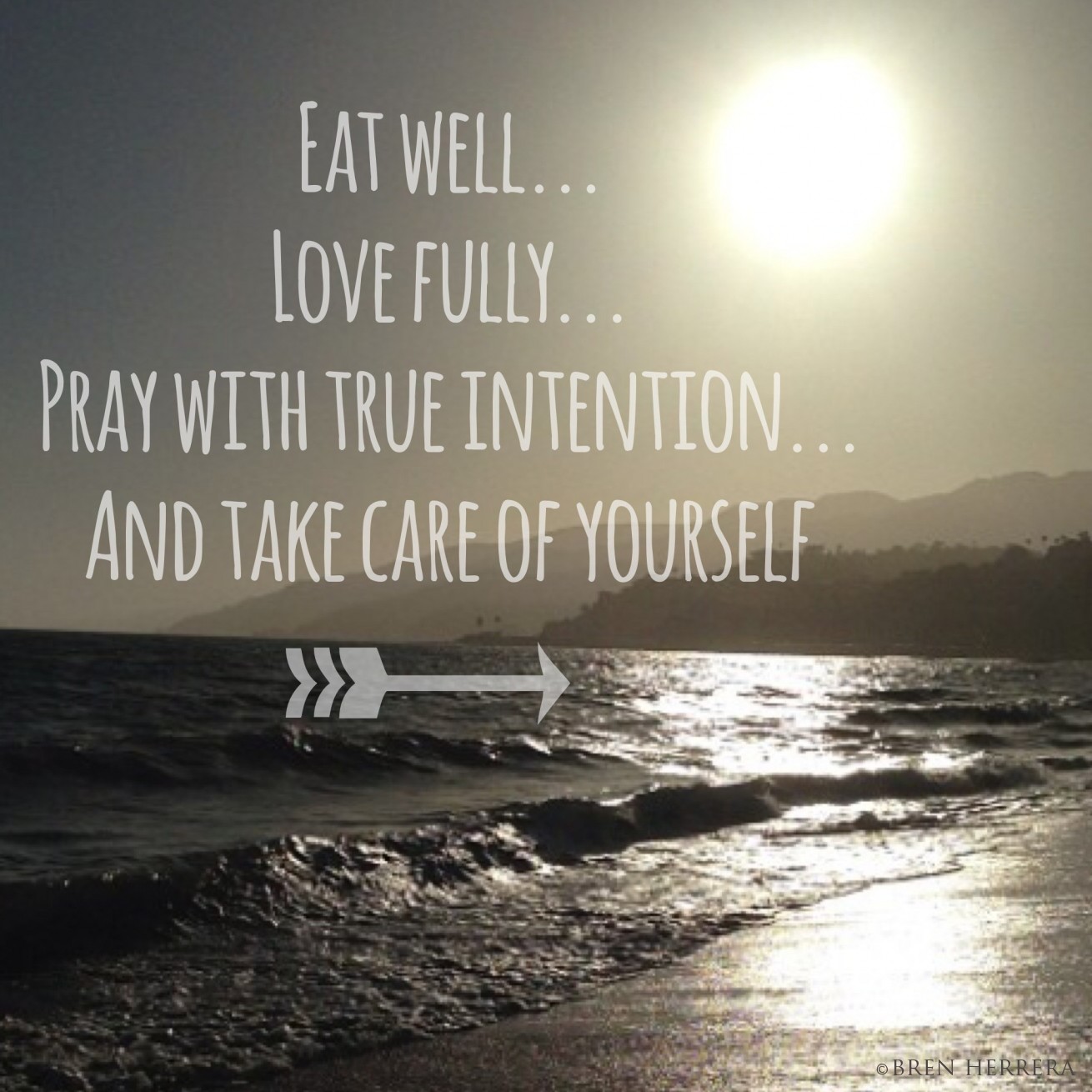 Elle’s good friend Dawn of Vanilla Sugar Blog, and mutual to me, penned these thoughts shortly after Elle passed away as she remebered her. Kristen created the graph. I was instantly drawn to it. It impacted me to the core. It’s so much of how I live my life and how I try to inspire others. Perhaps it’s why Elle and I got became friends and admired each other. Her last status said something to the effect of the Grammys this year were boring. I agreed and knew she probably thought I did too, so I didn’t bother commenting. I kind of wish I had since I so distinctly remember seeing that status run on my feed.

My friendship with Elle extended outside of Facebook. She read my blog, I read hers. And much to her credit, she helped me out a few times when I needed some contributors while I traveled. Specifically, she loved sharing a Latin-inspired dishes for my annual “All Around Latin America“ round-up during Hispanic Heritage Month. She never said ‘no,’ but for some reason which didn’t sit right with me, she was unable to this past September. I wish I could say she was just really busy, but something tells me she may not have been feeling well. Regardless, I’ll cherish and be so grateful for the great enthusiasm she shared with me every time I posted something I was into… I remember her telling me that I had a fabulous life and my job was simply to continue sharing the beautiful parts of it. Something like that. Always honest and excited for me.

I can say she was one of biggest fans.

When the group of food bloggers decided to host #Elleapalooza, wherein we’d pick a recipe from her blog and recreate it, I was excited. Everyone else pulled it together and blogged last weekend. I was on a different schedule with other commitments, but I wanted to support the unity of sharing her awesome culinary creations. And really because she always shared love with me. She was so intent on letting me know she supported my work.

I can’t pay for that.

It was really, really cold when I started writing this — enjoying the biggest snow storm DC has seen in four years. Soup came to mind. Shortcuts came to mind. I had a lot of shoveling to do for my parents and no real time to come up with something super unique. I needed it to be comforting, practical — something I already know well and delicious. Sure enough, the most recent soup on Elle’s blog was her remake of Campbell’s tomato soup. This couldn’t be more perfect for me to recreate. Elle’s point was to recreate a popular cult classic but making it healthier. She dissected theirs, eliminating the icky, bad-for-you stuff. 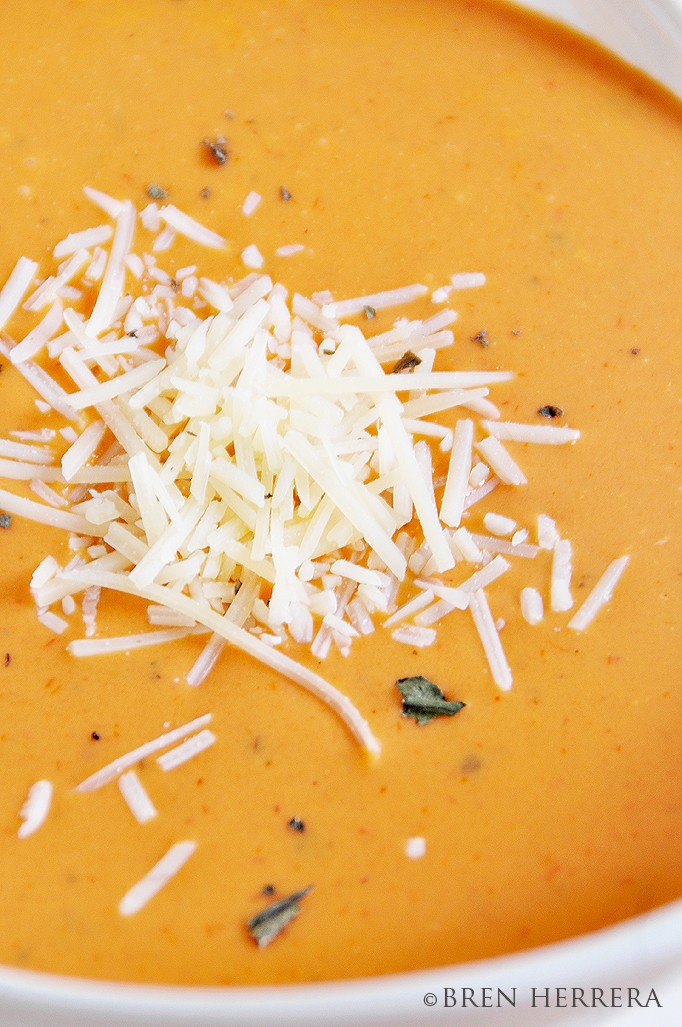 No irony in that one of my favorite soups ever (third to Mami’s chicken soup) is tomato bisque and the one I love the most is from Safeway‘s Signature Collection; yes, a grocery store branded soup. Theirs isn’t really a bisque, rather creamy and full of herbs and the right amount of spice and sweetness. But when I tell you it’s amazing, I tell you it’s amazing. The only thing is that it’s entirely too egrious in its sodium levels. It’s like inviting cardiac issues. I love it but when I detailed the ingredients, I knew I had to cut it out and just make my own. Plus, tomato soup is something I’ve really been wanting to make from scratch to share with you. And this was my chance.

My ode to Elle, a reengineered soup she’d love. It came out great, way less salt, and just as heart-warming as I needed it to be.

And a few of the other bloggers’ recipes inspired by Elle’s Kitchen:

In large stock pot, heat olive oil. Sauté garlic, onion, and bell pepper,  until onion is translucent, making sure not to over brown garlic. Throw in bay leaf. Stir in tomatoes and cook until they start to soften and break apart. Add oregano, basil, turmeric, and Sazon Goya. Stir until all ingredients are well blended, about 10 minutes. Add vegetable broth and tomato sauce and cook for minutes on low-medium heat for another 10 minutes, stirring occassionally. Whisk in whipping cream, adding sugar and red pepper flakes. Stir well and cover. Let cook for 25 minutes on low . Add  salt and pepper to taste.