Thankfully, I don’t know many women that have suffered from the malices of breast cancer. The closest scare was my cousin’s mother-in-law who spent her entire life not fathoming she could be stricken with the deadly disease. It wasn’t until her arrival to the US two years ago did she put some factors together: her mother, sister, aunt and grandmother had all lost the battle. My mother, being the ultra resourceful and known among our inner and extended circles, saved her life. That’s a story for another day, but “X” is cancer-free, just 18 months later.

She may be a rare case. But, we need to have more of those stories of survival. Too many woman, mothers, sisters, aunts, friends, nieces, cousins, grandmothers and wives have suffered the wrath of such an ugly disease. 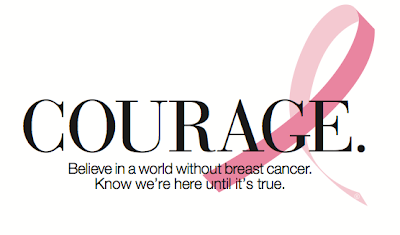 October is breast cancer awareness month and pink ribbons are everywhere. Causes and campaigns for the much-needed obliteration of this diseases are in full effect. Beauty pioneer Evelyn Lauder, a visionary and life changer, sadly passed away exactly one year ago to complications of  non-genetic ovarian cancer, but has not stopped her legacy of empowering women all over the world. She brought the pink ribbon — first revealed in 1992 — and awareness of the deadly disease to the fore so that women would be informed; men too.  Now in the company’s 20th anniversary of celebrating life and hope, the BCA Campaign unveils a new logo and mission statement: Devoted to defeating breast cancer through education and medical research. To date, total contributions by The BCA Campaign to BCRF exceed $35 million.

Some pertinent facts about Estée Lauder companies and their mission through the life of Evelyn Lauder.

Between now and the mid-November, all Lauder beauty companies are offering products on their respective counters which they’ve selected to represent the fight and mission. The products we all love to use to beautify ourselves have an added value by sharing proceeds  and donning little pink ribbons. The campaign is now in its 20th year of dedicated work and couldn’t be more excited about their efforts.

My favorite: Clinique moisturizing lotion and Pure Lipcolor in “Candy.” Both are great for everyday wear. I need to get my hands on the Bobbi Brown bronzing powder! It just looks so lush!

Visit your local counter and share the love with those suffering & fighting, those that don’t know and those who’ve lost the fight. Wear pink. Rock pink. Be pink!

All products have a donation of at least 15% going directly to the Breast Cancer Research Foundation. Every product has a different donation amount. See counters for more details. Most items are available now through Nov. 14, 2012.

*I was not compensated for this post, but was provided some samples to write this review. Every opinion is my own, honest and authentic.