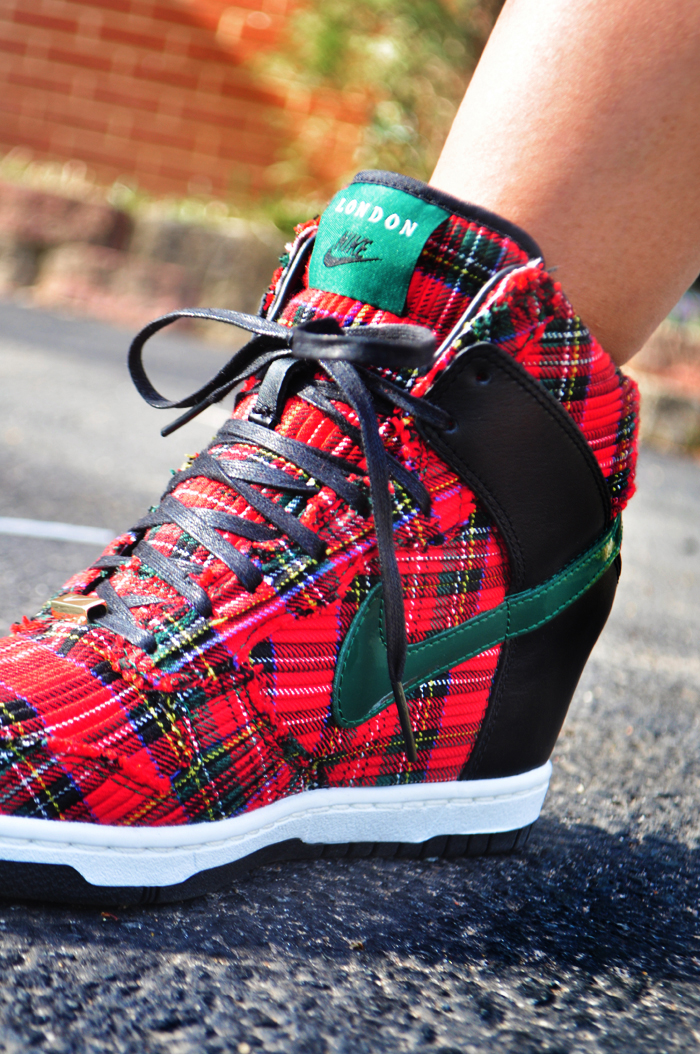 I shared a picture of this uberly fabulous wedge platform sneaker by Nike today on my Facebook wall and a fun friend was quick to rhetorically ask “You… B? In tennis shoes?” I chuckled at her question because I’m certain she speaks for many of my friends. But truth is, I really do wear sneakers and more than you’d ever imagine. One caveat, though… they have to be super fly for me to really rock them. Apart from the necessary running shoes, any sneaker occupying valuable closet real estate must come with it. Be bold and beautiful. The culprit for double-takes.

Naturally, I lost my composure when these bad girls showed up at my door today. Unannounced. I pulled the drawstring bag open and found them staring right at me. 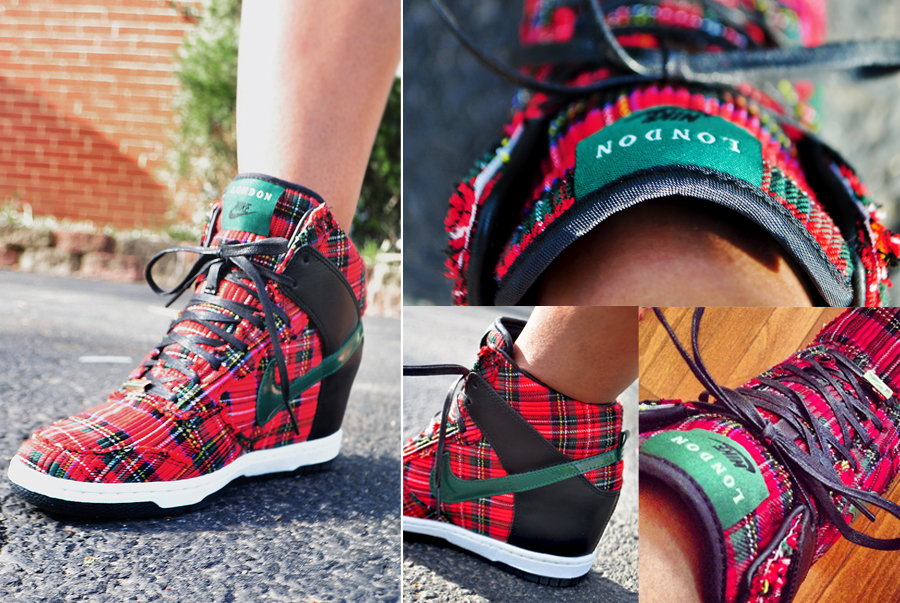 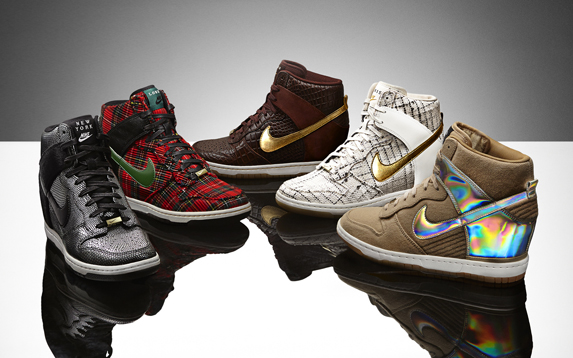 I wasn’t anticipating them, but knew they were recently released. As genius as they are, Nike has simply outdone themselves this time.

Let’s talk about my red London ones real quick. Spartan pattern, tattered fabric in a perfect layering patter and a green patent leather swoosh. Without trying, the sneaker is high glam.

If I had to have a 2nd pair — and knowing me, I’ll scavenger the nation — the Milan version would take my breath away. Literally mirrored after the city’s lux and lush culture, the sneaker makes sense having croc embossed leather and chocolate suede juxtaposed with a supple gold swoosh. Nike’s own blog couldn’t have described this one any better. In fact, it’s total confirmation they need to be on my feet:

If you start your day off with a cappuccino, you’ll love the Nike Dunk Sky Hi Milan.

It’s as if they were speaking to me directly. They are watching my moves. 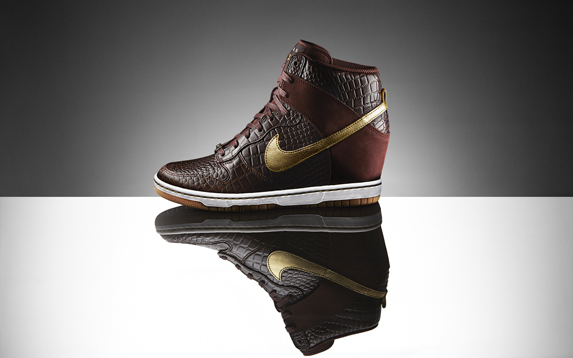 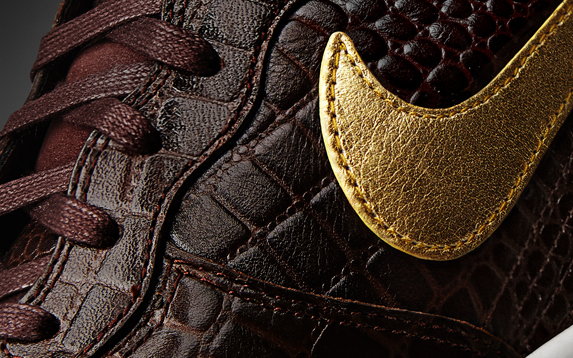 Surprisingly, the Paris didn’t strike me as having to have…initially. but only because it’s delicate white cloth material would soil too fast for my pockets. Because yes, I’d be wearing them quite often. The design is still thoroughly executed. On second thought… as I type, I see a very Chanel-eque sneaker. It’s all in the details. 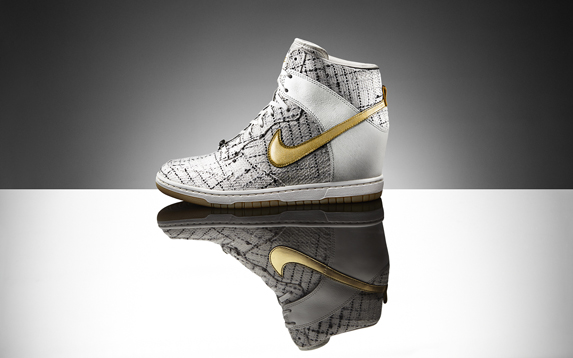 New York had to ultra simple with an all black pair… a monotone city requires a sleek shoe that speaks for itself. Of all the designs, this one’s the most classic and can be enjoyed whenever, wherever, for whatever reason. I’m seeing mini skirt, blazers and fabulous arm candy with this one. 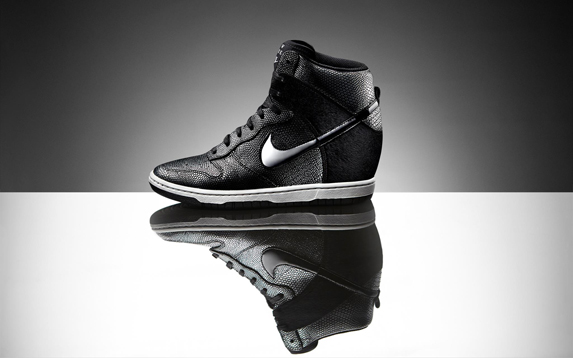 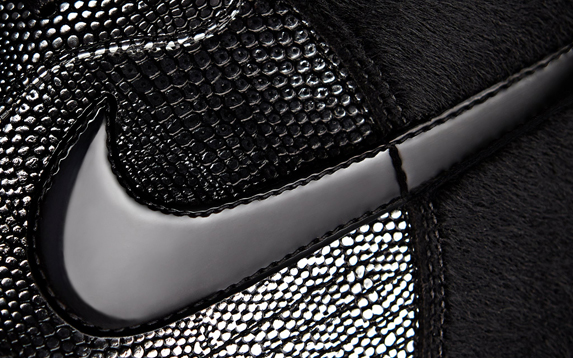 Here’s where my heart sinks with a slight bit of disspointment. Just a slither. The Tokyo pair did absolutely nada for me. The neutral color just makes it another netrual color shoe — though I’m thinking it’s a nice deviation from Nike’s tradition. And the iridescence? Uhm, not my style. Perhaps they’re stunning in person, but in the pics… I’d rather have seen a crazy pattern swoosh that showcased Japan’s culture. This may be a stretch, but even an origami style cherry blossom tree sketch? That’d be kind of haute, no? 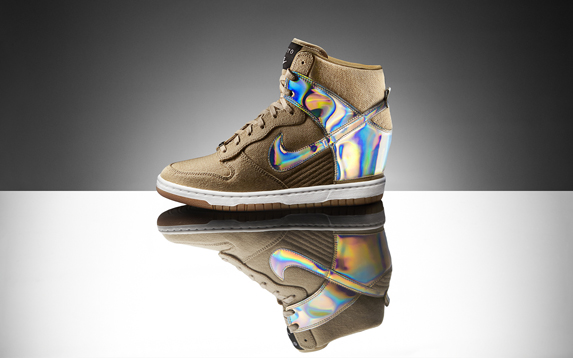 I’m falling in love with the sports apparel culture all over again. As much I’m spending my time in the gym, training for the Nike Women’s 1/2 Marathon (more on that this week), my weekly trapeze and other physically challenging activities, I’m creating space for more comfy clothes; stuff I can run errands in and still be chic.

These shoes right here… yes.. there’s no reason not to consider rocking some insanely awesome kicks!

They debuted March 27th in select boutiques nationwide. Limit one per customer. $225.

* I was provided with a pair of sneakers to offer this review. All opinions and expressions are my own, always.

7 Tips To Find Inner Peace In The Midst of Chaos

11 months ago by Candyce Graham
Peace of mind is defined as a mental state of calmness or tranquility and a freedom from worry and anxiety. Given the current state of the world, it may be difficult or close to impossible for most to find a peace of mind. However, I can assure you that it...

Melanin Activated! Are You Getting Enough Vitamin D?

1 year ago by Candyce Graham
Vitamin D has been a hot topic lately as a great way to boost your immune system. Many doctors and professionals have been advocating physical activity as a means to increase your vitamin D intake via sunlight. However, there has been conflicting reports s...