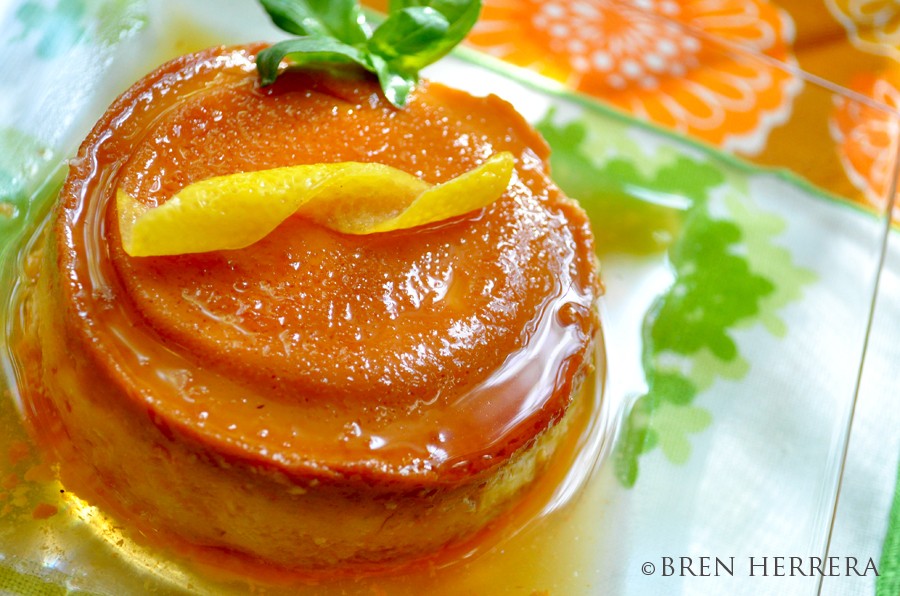 I’m going to keep this because I’m exhausted and quite frankly don’t want to belabor a point already made. It’s #FLANFRIDAYS and you know what means! A new flavor and caramel goodness.

Yes, it’s been 3 weeks or so since I’ve posted a flan, but aren’t you glad we’re back!??!  The personal orders and intense travel have been keeping me busy and disallowing little time to create new flavors. Humans are creatures of habit so when we like something, we tend to not part with it. The two flavors that are repeat orders are toasted coconut and pistachio….I have a client in D.C. that orders 2 when I’m home: one to eat on the way home (she comes with fork in hand and all) and the other for the family soirée, which ironically she always seems to have when I’m home.

At this point, I can make those in my sleep, I swear!

While I love those, I’ve been anxious to try something try something different. Something light and reminiscent of summer days past! Because yes, today is the first day of FALL! How about that. No more butterflies meandering in my parents’ floral garden, pool-side sunbathing, bbq’s, banana splits and decadent ice creams.

In fact, just as I start oiling up Mexican tan coupled with a 4 lb weight loss (wherein I’d like to show my legs), the 4th quarter solstice makes its appearance. Just like that. 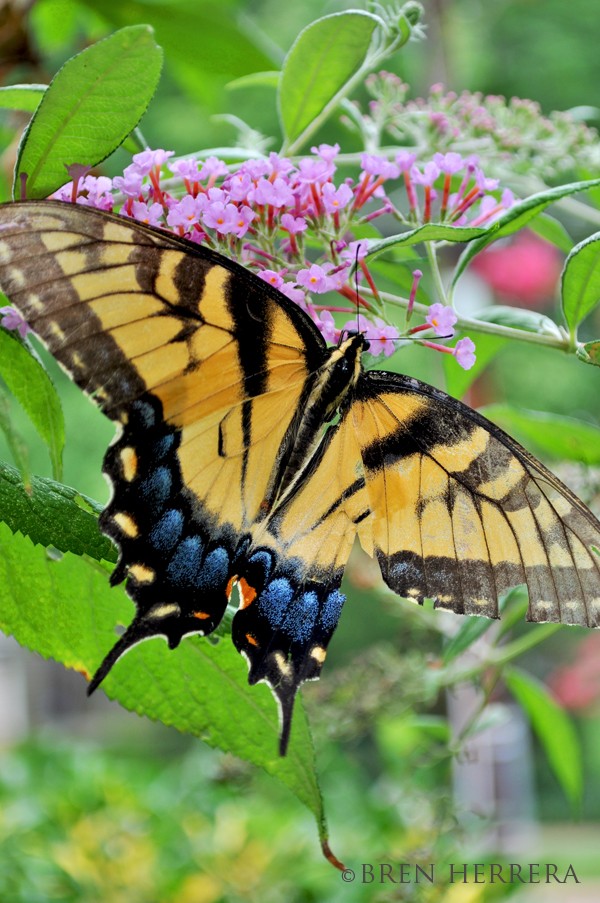 I’m kind glad about it because we can now move on to fall harvest and flavors we all crave. So, as a proper adieu to the season I most loathe is in order, I wanted to savor something light. Something to erase the searing 100F + weather and humidity Atlanta suffered for more than 90 days– a record breaker for the city.

It just so happens that I had won a jar of the most amazing curd I’ve ever had….better than the ones I’ve made…almost! 😉 A few weeks ago, Chrystal hosted a giveaway for a jar of grapefruit basil curd from gourmet food purveyor Monsieur Marcel. Serious Yum Factor.. I entered the contest on the brand’s FB page where they asked what we’d do with it. I responded in my best French and said I’d make a sexy libation. I won the the the giveaway and the curd was on its way.

As I pondered what I was really going to use it for, I stuck my demitasse spoon in the jar and about passed out. It was 1 am or so. I quickly IM’d Chrystal and demanded another jar! One jar was such a mean tease. Our convo transitioned into what I’d make with it. My mind still set on a cocktails, she suggested a flan.

Really? A flan? Another flan? I dismissed it and had 5 more spoonfuls.

Understand that for me, the combination of citrus and basil is pure bliss. A lemon basil martini was my favorite all summer. Did you see this one I had in L.A. recently? Utter sexiness.

And I won’t lie… I’ve made a lemon basil flan for myself and just roll my eyes back when I selfishly slither a slice into my mouth.

But I’d not tried a grapefruit and basil combo of any sort. Nothing about it could wrong. Especially since I have special affection for the fruit. Growing up, papi and  I used to eat fresh grapefruit just about every morning. We’d sprinkle a teaspoon of sugar to kill the acidity. Thankfully I’ve grown out of that.

Finally… the time came. I had eaten more than 3/4 of the jar; and always late at night. It was my midnight. I forced myself to reserve a bit for something, but not a cocktail–not enough.  And then I went on vacation, so the remains were spared.

Lo and behold, at 2 this morning, I decide to make this flan. I thought of the curd and it all clicked. I had just enough to make 4 ramekins.

The flan itself didn’t come out as pretty as I would have liked. I mean it was 2am and on little sleep. Swirling piping hot sugar as fast as I could into each mold just wasn’t working out so smoothly. My reflexes were slow, hence the uneven top and lumpy sides… normally, it would be smooth and even. But, you should know that does not alter the texture or taste. 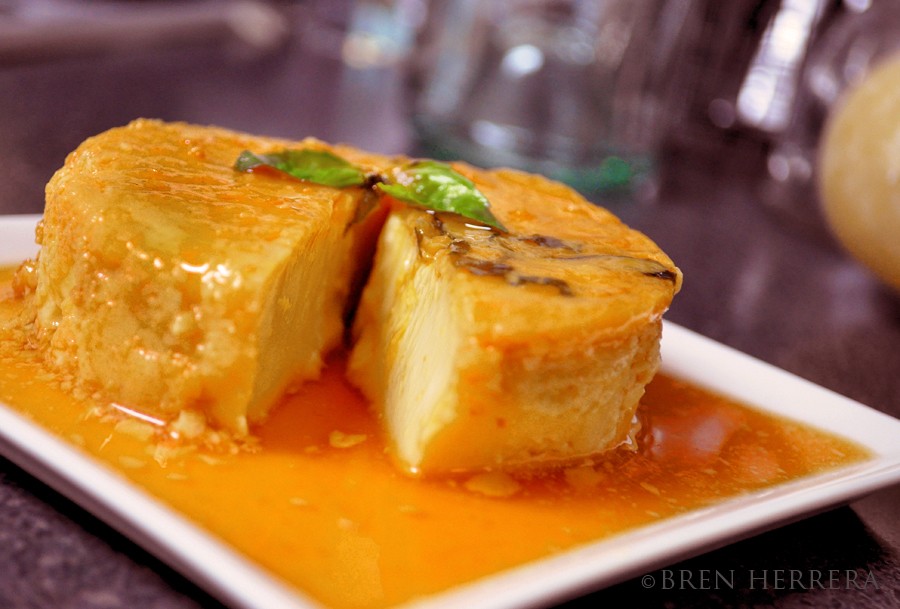 (this was the 2nd ramekin, which came out a bit more even on top but not as smooth on the sides. Roll of Dice!)

Pure aesthetics, friends. My heart is still content. Very content. And so will be the bellies of two friends I’m sharing them with today.

My friends, if you don’t make this flan, at least do yourselves a favor try some of that curd. Oh my, oh my. You don’t even have to cook with it. Just eat it! But if you make a flan, you will not be disappointed. In fact, what a better way to end summer than with a delicious custard with subtle notes of grapefruit and perfume-y basil!

I don’t imagine one! 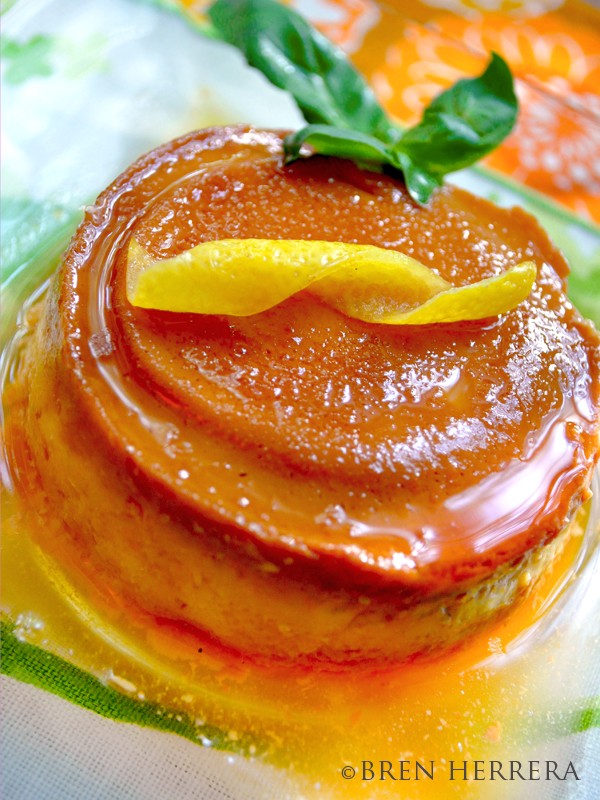