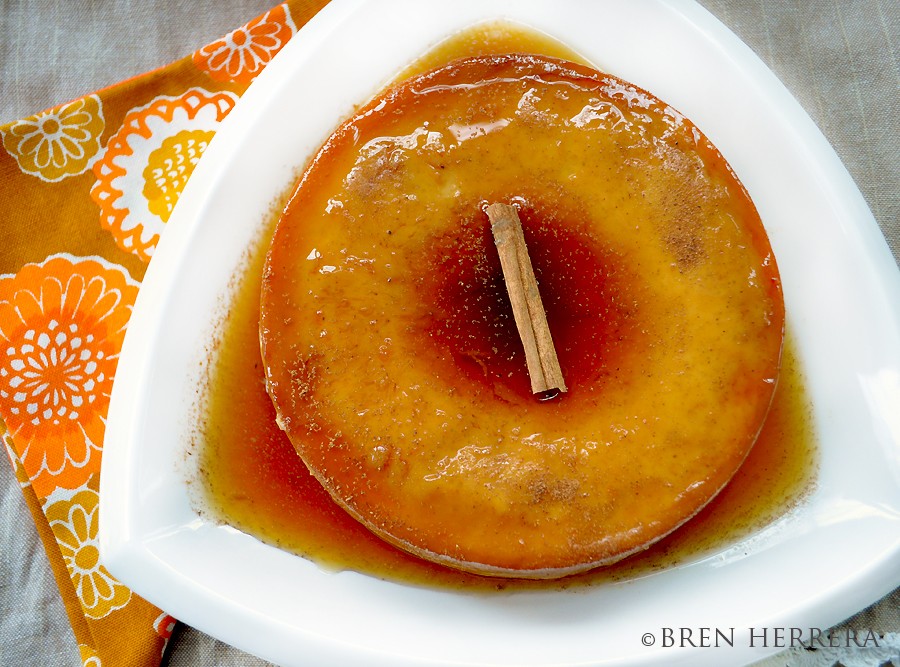 November was a super tough month for my family. My Grandfather passed away.

I went to DC for Thanksgiving and spent two sick weeks there, being confined to my mother’s dreamy bed and the hyperactive kitchen (on days I mustered energy to crawl out of bed). After a miserable 9-hour drive back to Atlanta, I needed to spend some pensive time alone. I’m alone in Atlanta for the most part — it’s just me and Paris. But, I needed to get out and see strangers, see nature, feel the air and embrace the new season. For many reasons this season is different than others. There’s been deep loss, but tremendous growth in my personal life. Being outside would be good to put things in perspective without the unnatural distraction of this laptop or TV.

I decided to spend my first Saturday back at Piedmont Park, a micro blueprint of a wannabe Central Park. It’s lovely, actually. Lots of trees, open pasture and tons of happy dogs. There’s a lake and an amazing view of Atlanta’s skyline, which happens to be one of the prettiest I’ve seen on the east coast. 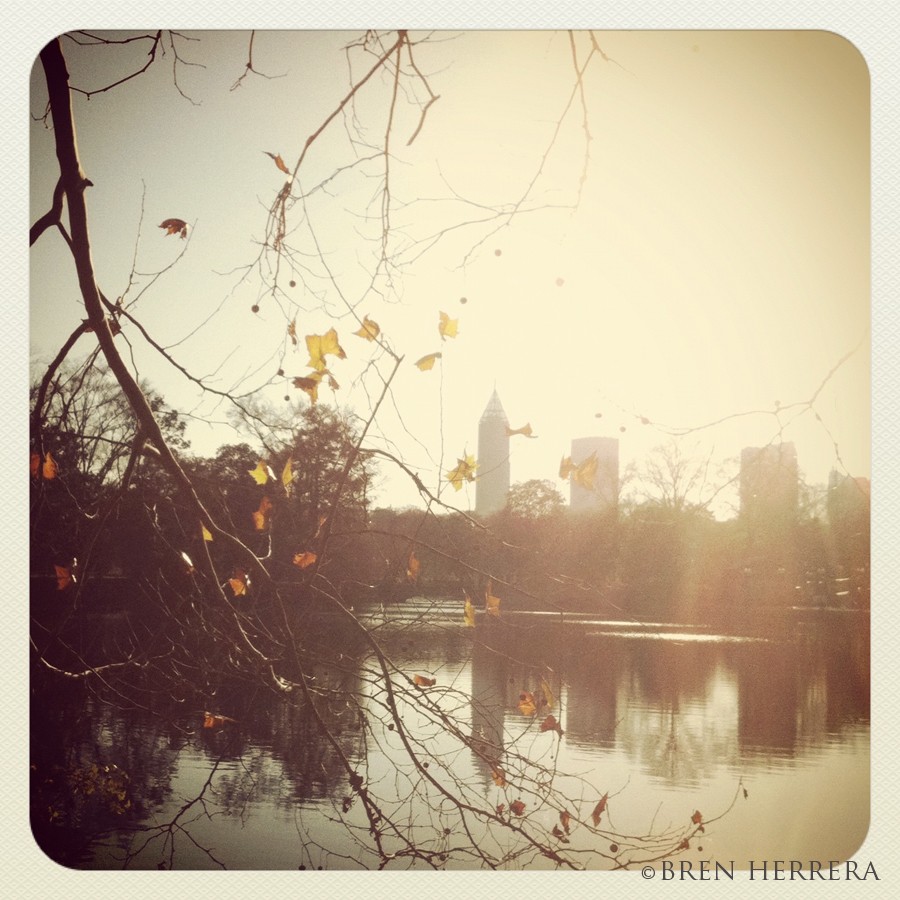 Piedmont Park in the early morn.

It was a brisk early afternoon and all I could think of was keeping my bare hands warm…Paris needed to be handheld though, so I walked pretty rigorously. Not my intention. But, even in my rushed walk, I took some time to sit down and think. Truthfully, I needed to have a conversation with myself about pertinent situations. Mentally itemizing what I’ve been unhappy or disappointed with would be a great start.

But damn, that list was way too long and I’d be at the Park ’til dusk… I quickly edited my list and focused on those things that matter…. now! At the fore was my few yet solid friendships and how I needed to nurture them more. I questioned being in Atlanta and what the purpose of living here is. After almost 6 years, I’ve still not figured it out, though I have some theories. I kicked up dirt at the reality that I didn’t spend enough time with my grandfather while he was alive and even when he was really ill over the last two years. How could I now make that better?

That led to a quiet conversation about my passions and how it’s affecting my career. The big question was: Am I really giving myself and my work 100% of what I have in me. Was I cooking my heart out? Was my writing better (and more concise???)? Was my travel note-keeping organized and shared more efficiently. Were my editorial deadlines being kept? (not to mention the other projects in my life having nothing to do with food that crossed my thoughts). 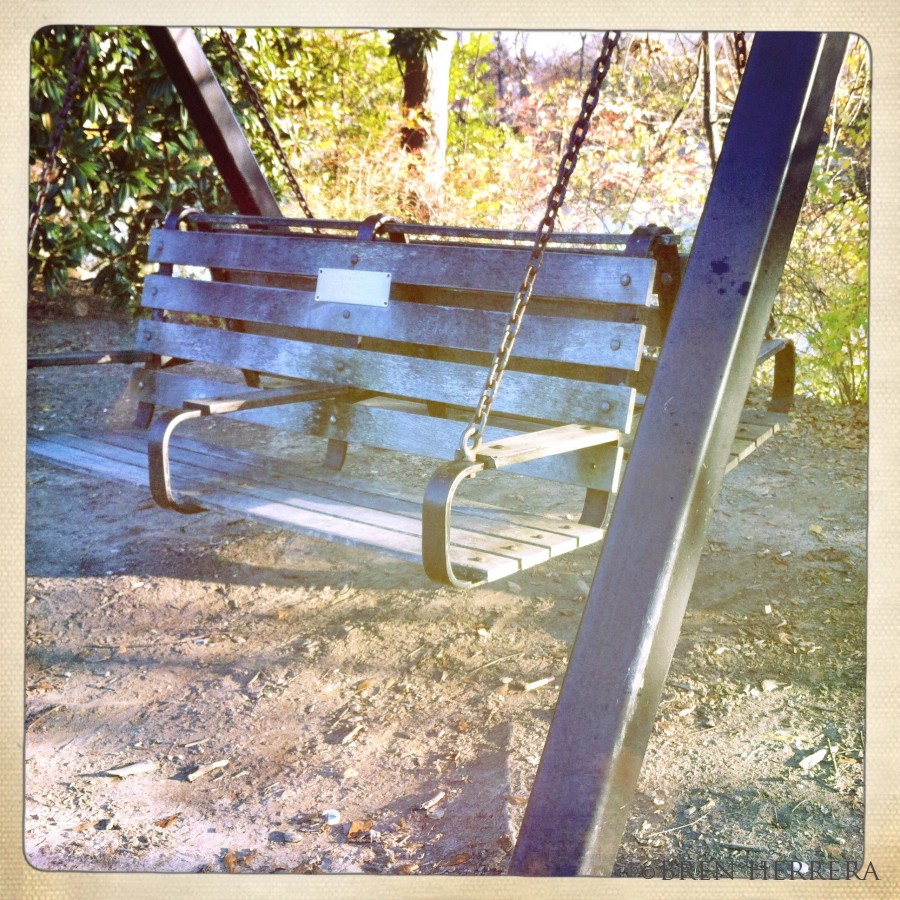 The answer caused a stall on the swinging bench.

If the water on that lake I was sitting in front of was iced over, I might as well have skated right across to the other side. Metaphorically, that’s exactly how I was feeling about my efforts in my life.

Thank God the water was just water. I stayed on the swing and said a prayer, asking for my mojo to come back in full swing. For that zest for life and persistence I used to have and to take over my spirit and emotions.

I gazed at a pink flower and transferred the “woe is me” feeling into “there is a bright side to all of this.” 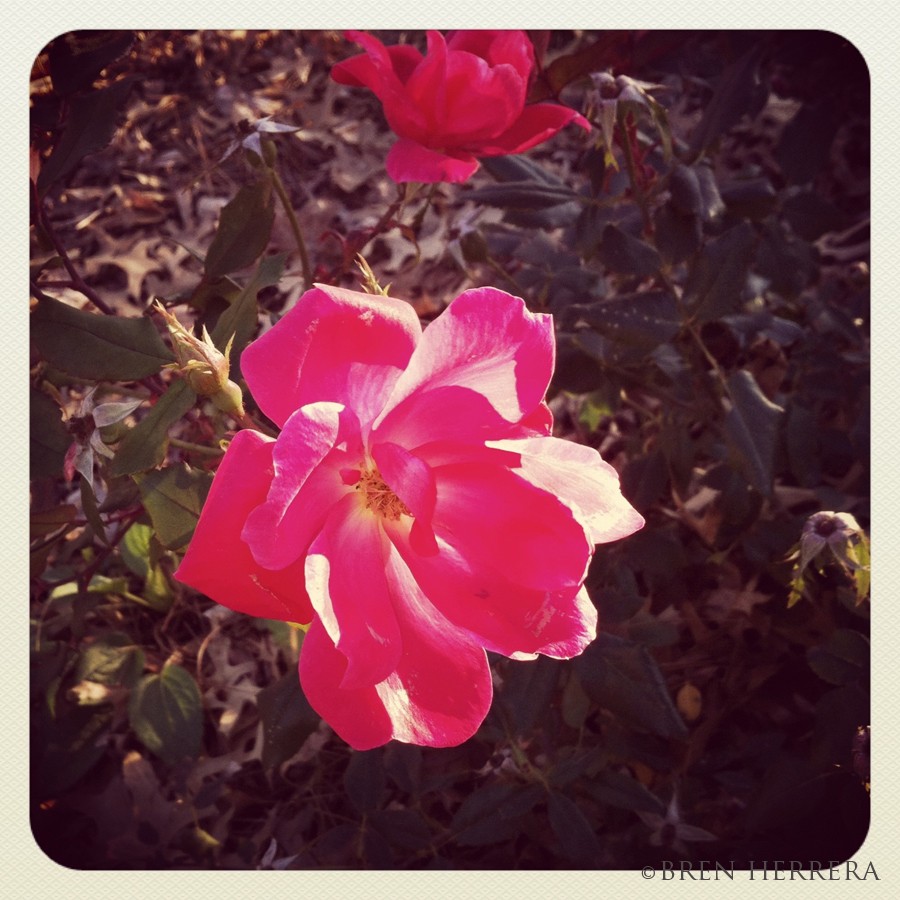 There really is my friends.

Where am I going with all of this?

It’s Friday and you know what that means…. #FLANFRIDAYS. The idea came to life one year ago and is going better than I thought, but not as great as it could be. Not because I’ve run out of creations and new flavors to combine. It’s because I’ve not been giving 100% of my passion and that joi de vivre to my work.

There have been too many Thursday afternoons where I simply didn’t want to make flan — unless of course it was for a client, in which case I’ve probably already shared that flavor or wouldn’t be able to prettify, plate and photograph. But, the lack of inspiration and motivation hasn’t plagued just this delectable dessert day. It’s affected my cooking, writing and sharing. I won’t throw myself under the bus and admit how many blog posts are in queue with real deadlines I’ve missed. Fabulous trips I’ve taken involving extravagant food events, new recipes I’ve developed, entertaining interviews with food personalities like Tiffany Derry of Top Chef and Chef Virgina Willis talking up gourmet Southern cuisine in a lively podcast. Or what about the colorful cookbooks and gourmet product reviews needing attention? … that’s just the beginning of it.

The trip to the Park did me well.

I realized there was no reason to be in the defying rut I’ve been. Life is about changes, transitions, new beginnings, challenges, growth and embracing all of those.

Christmas came and went. My grandfather would have been 91 last Sunday. In his honor, we ate well—he had a robust and extraordinary appetite — sang “Happy Birthday” as we did every Christmas morning, and tried to be as uplifted as he would have wanted us to be. I paused again on that day and thought about how precious life really is. My grandmother stood by the tree, unacommpanied by her 65-year partner and best friend. And yet still, she’s perservered and stood strong in her small frame.

I was revived through all of this. Possibly a feeling of guilt took over. How could I not be inspired, motivated or give my work –talents I’ve been given– 100%+ of my energy? It’s what my imprint will be.

With 2011 ending on a somber note, I hug 2012 tightly with passion, indulgence, fearlessness, relentless tenacity and kick ass mojo. For a lot of reasons I won’t bore you with, 2012 IS MY year. I owe it to myself and to my faithful readers, supporters, clients, new ones to come and of course my family! 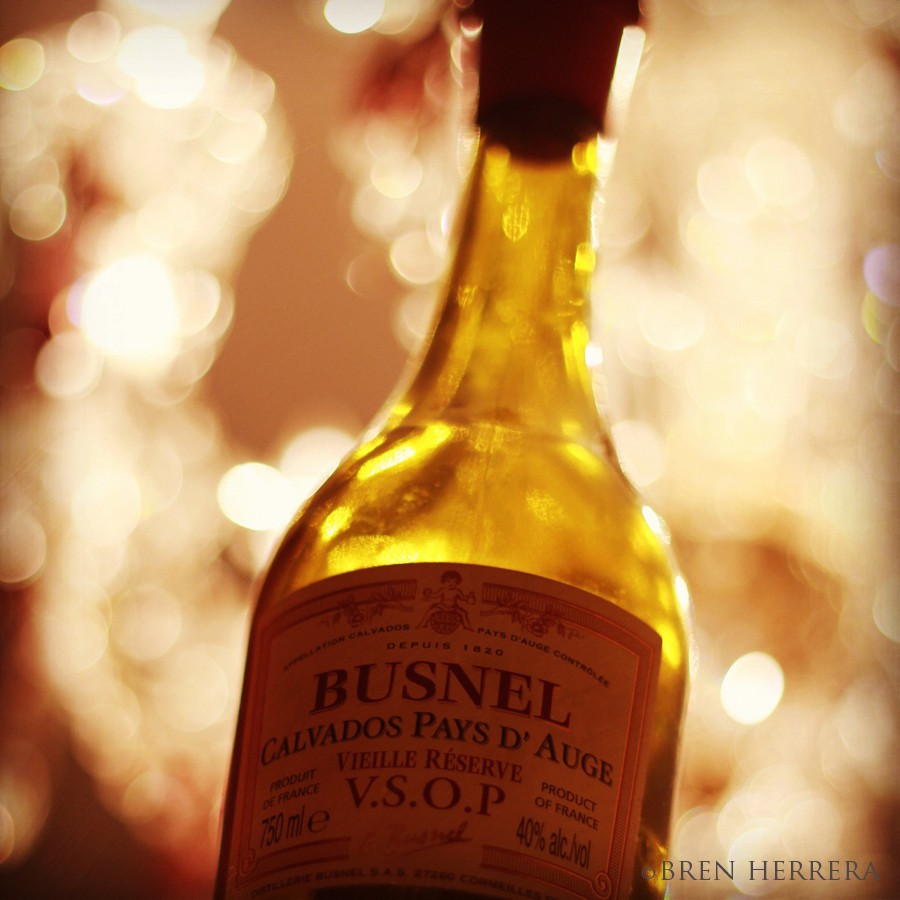 Here’s to all the marvelous endeavors, cooking, eating, writing, traveling, tasting, creating and growing the new years is bringing us all! 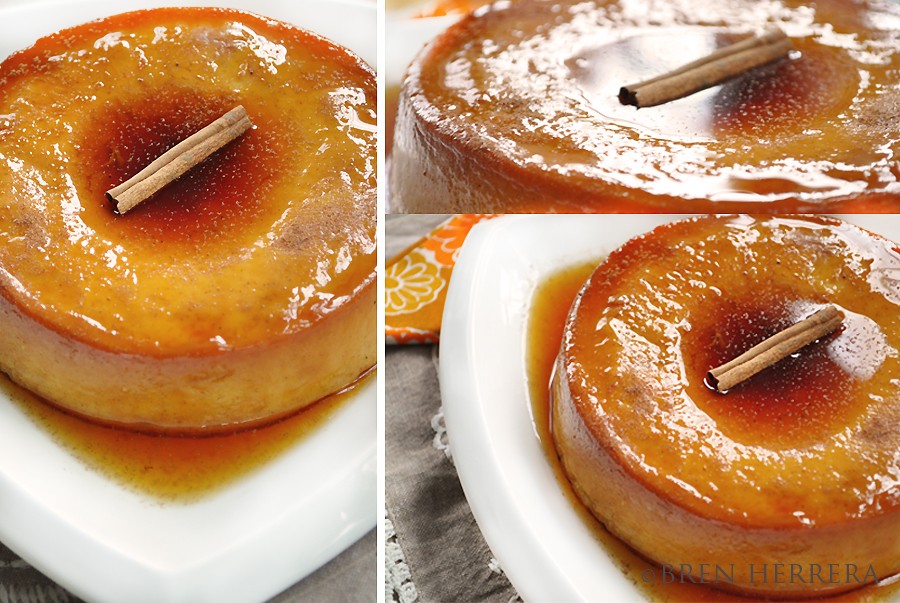 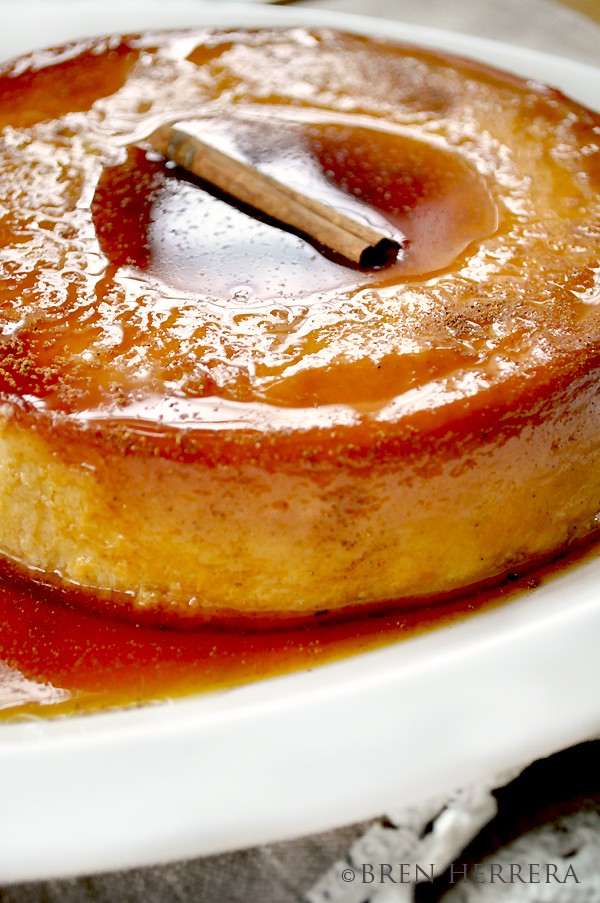 Whisk eggs in a medium sized bowl. Add and combine sweetened condensed & 2% milk, Jamaican rum, 1 teaspoon of cinnamon and vanilla extract. Whisk in creme cheese until well blended into egg mixture. Set aside. Add sugar to an 8″  flan mold and caramelize on medium-high heat until it is golden color, stirring constantly with wooden spoon. Make sure not to burn sugar.  When sugar is fully liquified, carefully  coat entire flan mold, covering all sides, using  circular motion (I suggest using a brush if you are not experienced in handling extremely hot caramel).

Add 3 cups of water to a 4 or 6 qt. pressure cooker. Gently place flan mold in cooker and close lid. Place jiggler on lid. If your pressure cooker jiggler has different PSI settings, set it to 10. Cook on high for 10 minutes, or until pressure cooker starts hissing. Turn off heat and allow all of the pressure to release itself, or for another 5 minutes.

Remove from pressure cooker after all pressure is released. Refrigerate for 8-9 hours or overnight for best taste. Remove from refrigeration 30-45 minutes before serving to loosen some. To serve, using a butter knife, loosen the sides of the flan all the way around. Take a large plate, place upside down on top of flan and flip. Dust remaining cinnamon on entire flan and garnish with cinnamon sticks.