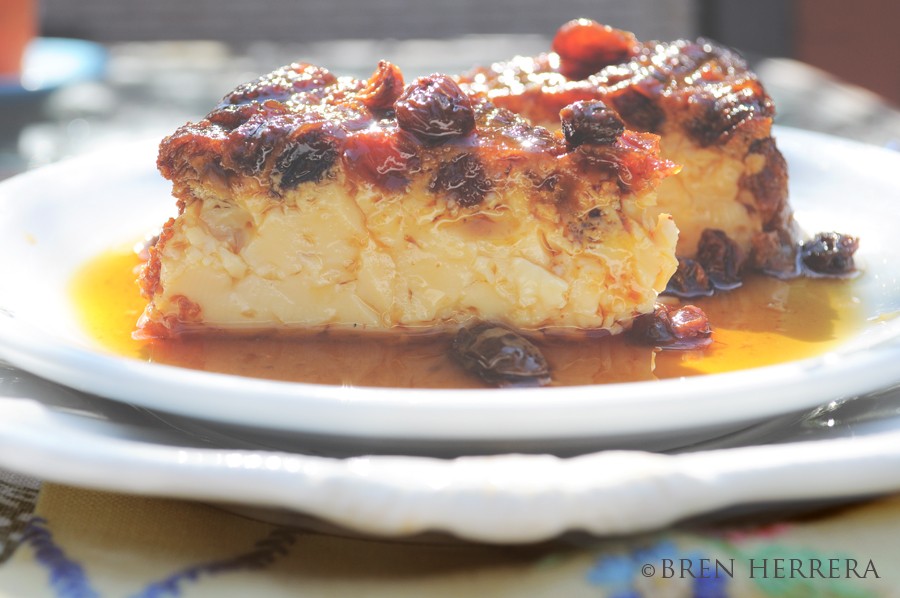 Sassy friends! Did you notice how I didn’t share a post two Fridays ago during the two week {All Around Latin America} feature celebrating Hispanic Heritage Month? Well, I was in Vegas and stuck in meetings and couldn’t make it to a stable connection to share with you this very post in time. I was bummed becuase it was supposed to be a knock out it the box way of ending the series, now in its 2nd year. I had to wait. And now I’m here, mustering enough energy to make this lovely flan happen and rightfully conclude the series! I close out this year’s series with a flan inspired by habits in our home and a spirit very commonly enjoyed in all most Latin countries — el ron! Enjoy! 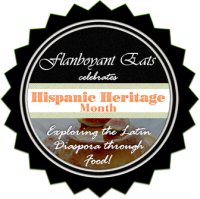 I’ve been home from NY less than 4 hours and the only thing I could think of was changing my clothes and morphing with the kitchen to cook something special. Well, after trying on the new shoes I bought in the Meat Packing District the other day.  The last 2 months have been super wild with travel from DC, around the US and Caribbean, so my poor counters, knives, pressure cookers, cutting boards, etc… haven’t seen my hands enough to remember I work there! I spent the last hour on the train from Penn to Union Station thinking about how I much I miss cooking every day and saying yes to every single client request that comes in. I’ve  had to turn down 2 so far and I’m not happy about that. Not to mention that this weekly flan feature has been slipping under the cracks. It’s all part of my growing process, I know it, but I’m thinking I need to sit and stand still at home for a weeks and become reacquainted with the very thing that allows to be on the road. And, I was inspired to make up for the recent inconsistency with something super unique. I came up with this flan flavor after many stares at my mom’s rum raisin ice cream, which she’s addicted to and doesn’t share.

Rum raisin ice cream has a weird effect on me. I like the smell of it, but I know that it’s not real alcohol in the mixture. Sure, I understand the expense and evaporation process alcohol goes through when cooked. But, not so much in ice cream. I mean, it is cold. And then the raisins are sometime a bit rocky for me so I end up spitting them out. But the cream always has good texture and tasty flavor. All of that imbalance on my palate moved me to equalize it into a flan. Pretty genius, I think. I get quite excited when I come up with a new flavor base. This was particularly special because I so want to love drunken raisins in a creamy custard. The ice cream version just isn’t doing it when I want to. Since I can control the flan, it was a sure go.

I made this twice before settling on a method. And still thinking about one more. Though the look of the 1st one was much prettier and more like it should turn out, (surely, I wasn’t in a rush), adding the rum to the egg custard or even infusing it into boiling milk and then again to the oozy caramel, wasn’t as perfect as it deserved. Thanks to a kitchen sink conversation with Mami,whom by now you should have guessed knows todo, it occurred to me that saturating them in rum overnight would yield the right levels of spirits. Claro.que.si. Oh, duh. I like to knock my flans out in one attempt, but sometimes the best ones take few efforts and modifications. This one is one of those times. The texture was a bit off and not exactly sure why. I do believe that I gave it gave it an extra 3-4 minutes under pressure and that’s a sure way to overcook anything. Timing is everything when using a pressure cooker.

All timing aside, what really took this flan over the top was the rum I used. 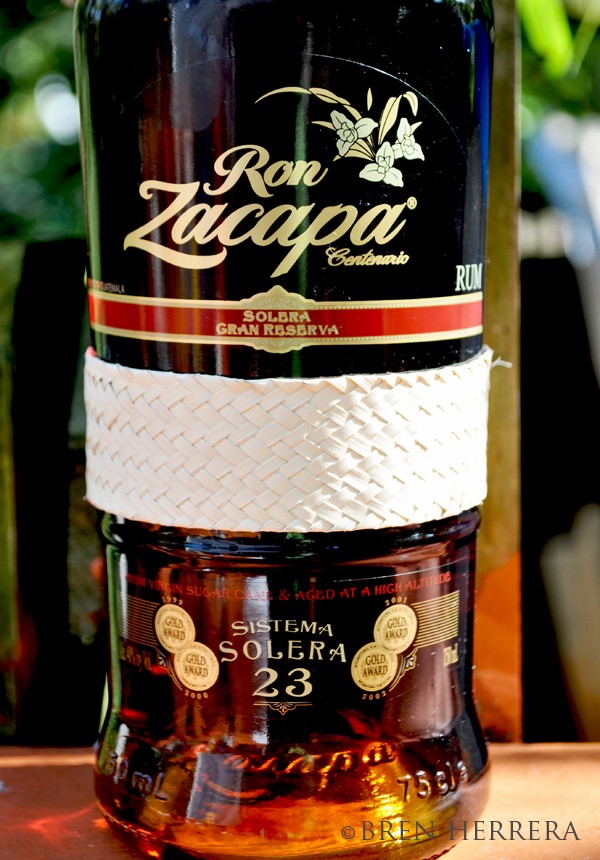 Having come across Zacapa, the most premium rum I’ve ever laced my lips with, last year during the 1st annual Atlanta Food & Wine festival and fallen in instant love, I contemplated using it in a dessert. It hails from Guatemala and made with virgin sugar cane and aged at high altitudes, making it ultra smooth.

Some purists would scoff at the idea of taking a $100 bottle of fine rum and using it in a dish where it would potentially dissipate. Rums of that caliber should be reserved for sipping over crackling flames on a fall night… with man on the side. But I swear it was so good that I’d do it again; and then serve a warm glass of rum sans rocks with it. It would not disappoint. But, it will cost you. Just  a few dollar more. And more than worth it.

I’m very pleased with this. I conquered that love/hate relationship with rum raisin ice cream I’ve had since I was allowed to sip on any form of alcohol. And will forever go forward making my own helado. This flan is now a mainstay.

Make it, friends. You’ll adore it. You’ll call your friends and invite them over for some. With rum shots on the side. It’s another perfect fall dessert option to add to your fancy repertoire! 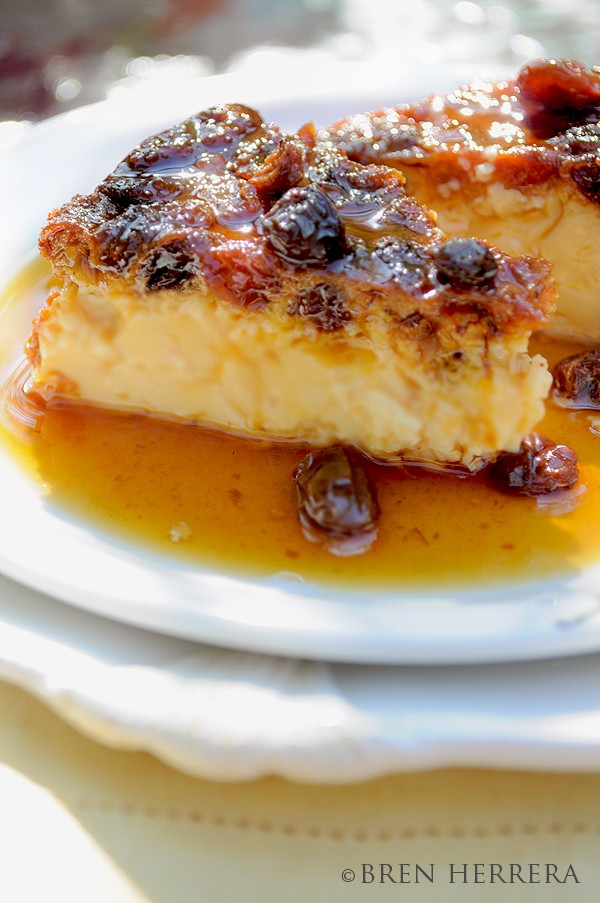 In small bowl, add raisins and rum. Cover and refrigerate overnight. When ready to make,  mix in flour to raisins until completely broken down with no lumps in flour. Whisk eggs in a  medium sized bowl. Add and combine sweetened condensed & whole milk, rum raisins, vanilla and rum extract.  Set aside. Add sugar to an 8″  flan mold and caramelize on medium-high heat until it is golden color, stirring constantly. Make sure not to burn sugar.  When sugar is fully melted down, carefully coat entire flan mold, covering all sides, using  circular motion (I suggest using a brush if you are not experienced in handling extremely hot caramel). Move fast if using a brush. Close flan mold.

Add 3 cups of water to a 4 or 6 qt. pressure cooker. Gently place flan mold in cooker and close lid. Place jiggler on lid. If your pressure cooker jiggler has different PSI settings, set it to 10. Cook on high for 10 minutes, or until pressure cooker starts hissing. Turn off heat and allow all of the pressure to release itself, or for another 5 minutes, approximately.

Remove from pressure cooker after all pressure is released. Refrigerate for 8-9 hours or overnight for best taste. Remove from refrigeration 30-45 minutes before serving to loosen some. To serve, using a butter knife, loosen the sides of the flan all the way around. Take a large plate, place upside down on top of flan and flip.

* Chef’s notes: you can add the rum to the finished flan instead of fusing it in with the milk. It will thin out your caramel, so you may make your caramel thicker by adding one additional tablespoon of sugar. Simply pour two tablespoons of rum over the custard and let blend into caramel. Continue to cut individual slices.