It’s baaaaaaaaaaack! Yes, after 2 weeks of a break from sharing a flan, I’m here with a super good and totally orgasmic flavor.

When I first told my dad I was playing around with peanut butter, he squirmed and asked me if I didn’t think I was taking it too far. Of course not, Papi! I mean really? Who doesn’t love peanut butter? As a child, I slathered smooth and crunchy varieties on just about everything, especially my bananas. Even though it’s likely to stick to the roof of your mouth, it’s worth the effort of getting all down.

A legume and not a nut, peanuts are a solid source of protein and are high in fat. A good fat.  We all know it: Peanuts are great for making a delicious peanut sauce in Thai food. Peanut oil is also a great byproduct of the little pod, and wonderful for frying because of its high smoke point. I’m actually pretty curious about the taste it would give to sweet fried plantains.

When I decided to make a peanut butter flan, I was driven by testing out textures. Working with fresh fruit can be tricky. Alcohol- flavored ones are  easy and nutty ones (like the pistachio one I made here) are wonderful on a different level. So using PB  was a game of consistency.

When making flan, any flavored flan, one of the tricks in yielding a perfectly smooth edge is to not overkill in whisking the eggs. You’ll end up with a porous edge which is far from cute. Good, of course. Sexy? Not so much. The exact threshold of having whisked too much can be determined if you have accomplished foam. Avoid foam when combining your custard ingredients. That’s not to say that a porous flan is bad. It’s a matter of aesthetic, appeal and that ooh la la factor. In fact, I have some friends and clients the specifically request for their flan to have all those little outer holes. Surely, I wouldn’t have served Joel Robuchon a hole-y flan! Could you imagine the look the revered chef would have made?! I would have crawled into one of his ovens!

I mention the importance of how you should whisk eggs here because it affected this flan as you can see in the image above. Initially, I didn’t know if I should melt the PB or add it as if– room temperature. I decided to leave it as it was. Probably not the best idea as I had to break down the peanut butter and combine it into the mix. That meant much more whisking than I normally do. I went for it anyway. 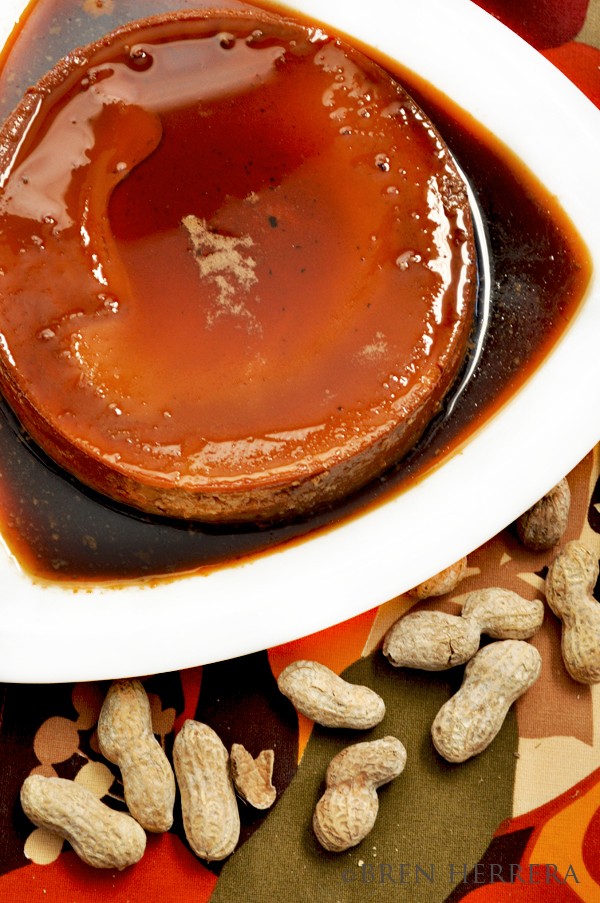 Baking time was the same, give or take 3-4 minutes.  And, as it turns out, the flan was off the rockers good!

Honestly, I didn’t think it was going to have much of a peanut butter flavor but it did.  I used smooth {Peanut Butter & Co.}Virginia produced peanut butter given to me by the National Peanut Board (how convenient their offices are 5 minutes from my place!) — and it just so happens to be the best peanut butter I’ve ever had– hands down. And all those little holes meant absolutely nothing and did not keep me or 3 friends from tearing it up. It was rustic looking and a slightly tanner in color, smooth and super creamy in texture and a tad bit less rich than a traditional flan.

It was perfect actually.