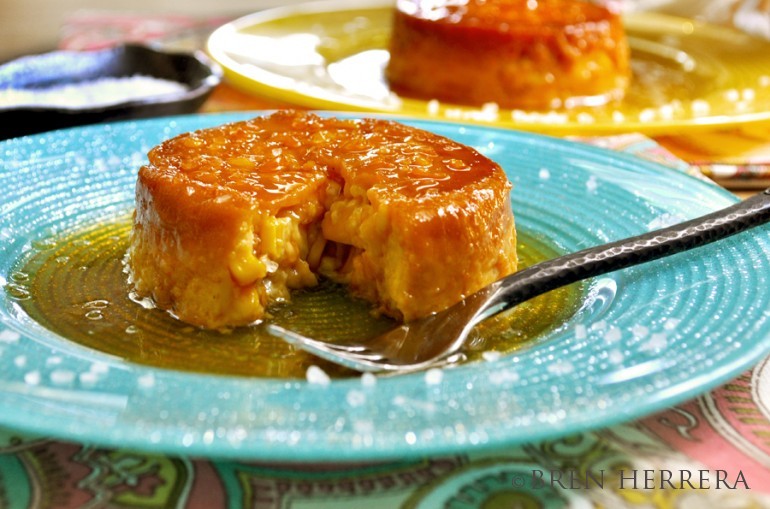 It’s #FlanFridays! That means a new yummy flan that will tickle your taste buds and excite the senses. In this case, it’s going to exploit all possibilities of perfect combinations.

Today’s is going to be one inspired my dad. As American culture is celebrating Father’s Day this sunday and loved ones are pulling all strings (though no where near as glamourous as we do for our mami’s) to make him feel special, I’m thinking of how I can feed him virtually. Since I won’t be in DC this weekend, I need to make him feel like the King of the Hill. 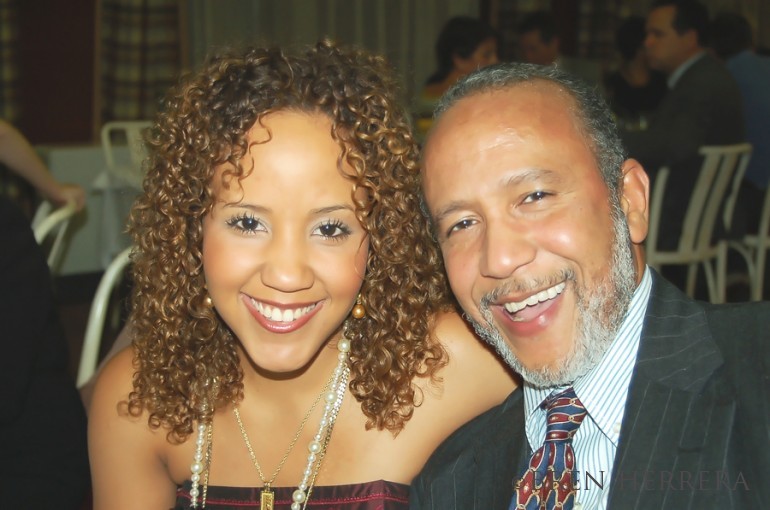 ( me and Papi in Paris celebrating his goddaughter’s baptism)

My father and I are best friends. We have a very open relationship, but one where we test each other’s patience. We challenge each other’s authority and I usually end up losing after intense and borderline screaming debates (which drives my mother batty!). I only lose b/c he’s papi and always has to have the last word. And, I do respect him. Growing up, we’d fight to the point where my mother had to separate us. It was usually about my choices in boyfriends, my ornate and gawdy jewelry, phone calls from teachers because I talked and disrupted class too much or because I didn’t commit to playing my cello 2 hours a day.
As an adult now, we fight over more substantive matters like my political dislike for Sarah Palin, the way I hawk-eye his every move, race relations, the color of my hair, my decision to live in Atlanta, my use of written colloquialisms and more recently how much heat I put in food when I cook at home.

But he buys me flowers just because and that’s reason enough to forgive his oft-time unreasonable political rhetoric.

None of these arguments take away the impact and importance of his role in my life. He’s my confidant and has instilled a deep sense of womanhood and integrity. He used to blow gaskets if any of us ever lied. I’m now kind of like that, only I can control my temper a bit better.  He’s also opened up my eyes to so many profound things, having sacrificed more than I can tell to introduce the world to us through international travel and other experiences. He’s taught me the beauty of music, languages, the importance of not taking anything for granted — he demonstrates the highest level of patriotism — and is the one that’s bailed me out of tough situations over and over again. I mean at my age, there are still times when I call him begging him for this, that or the other. We’ve agreed that if I’m not married by the time I’m 40, he’d have to be my main man and maintain me. I know he’s vetting men in my life and desperately working on securing a husband for me. He recognizes my  aptitude to be  high maintenance and would probably opt not to be responsible for placating me.

So because he’s so good to me and seldom says no, I have to reverse the role and treat him to a flan I know will giddy him up. There’s no ulterior motive in making this one, but if I had something in mind, I’d be making it to get a pair of shoes out of him. Oh yes, my dad loves my style and often compliments my wardrobe. He thinks some of my shoes are lady gaga-ish but still appreciates their art.

I’ll save a bribe for something bigger and not so ordinary. Plus it’d take more than a flan to entice him to drop some loot for me. But I want to indulge him from 650 miles away and make him drool. See, papi loves corn. Especially cornbread. Like loves, loves, loves him some cornbread. At one point, Jiffy box worked but as he refined his palate, homemade bread was the only option.  I soon jumped on his bandwagon and started loving all his cornbread hype and it became a joke between us. We had to order cornbread every time we went out to eat.

While there’s a vast menu of corn-based foods, including  tamales, which we both love as well, I thought of how I could incorporate the sumer crop into a flan. Sometime last year, I made him short ribs with a sweet corn purée which garnered me much kudos from him. Since he loved it so much the idea of a sweet corn or polenta flan got me super excited. If I know my dad, I  know he’ll love it!

But, the challenge is that my father is a purist when it comes to our [Cuban] food. He’s been very candid in telling me he prefers a traditional flan over any other and definitely my mother’s before mine! That’s fine. I’ve blown his mind away several times already and will continue to feed him new flavors until he gives in and acknowledges that fusion can be great when done properly. 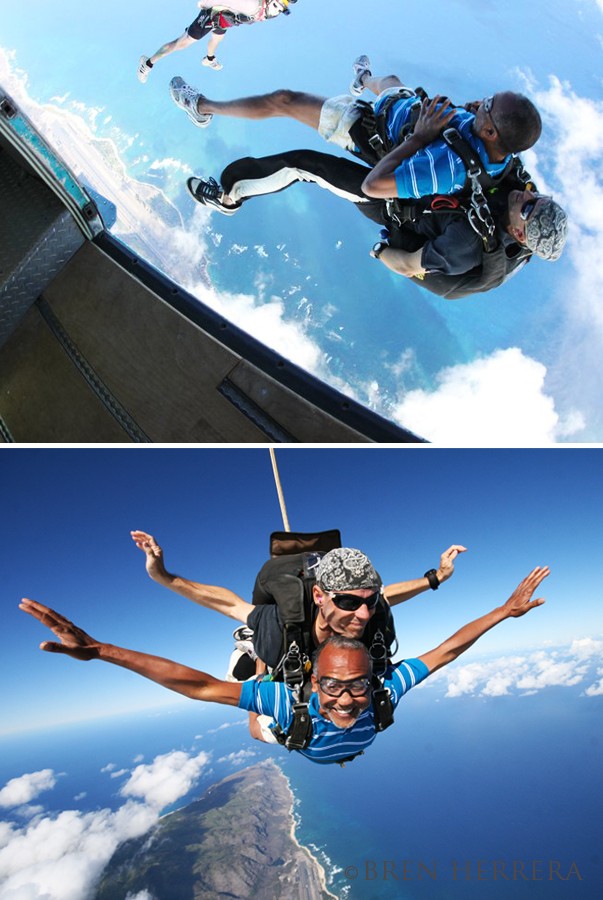 Plus, if’ he’s adventurous enough to jump out of plane at 14k feet at the tender age of 63, surely he can try yet another flan.

A corn-infused flan may sound insane and he may even say “boff” to the idea, but the result was quite genius. I modified the corn purée recipe I used for the short ribs entrée and added it to the custard mix. It was my first attempt so I was careful not to underestimate the flavor profile. I didn’t want to sacrifice the creaminess of the flan for which its known for, but I did want to accomplish a subtle amount of texture. Without much tweaking or altering my method, I put my lil’ ramekins in the pressure cooker and let them cook. They took a few minutes longer than other flavored flans, but sure as hell was worth the multiple pressure releases I did.

My sweet little friend was divine (please help me find another word as I’m so over using it!). It was savory but had sufficient sweetness to qualify as a dessert. And the combination of corn and dripping caramel was insanely marvelous. The texture wasn’t as smooth as I would have liked but it worked–it just made it more of a polenta type custard. And, the sea salt offered a lovely touch of contrast to the sweetness.

Needless to say I quickly ate both 6 oz. 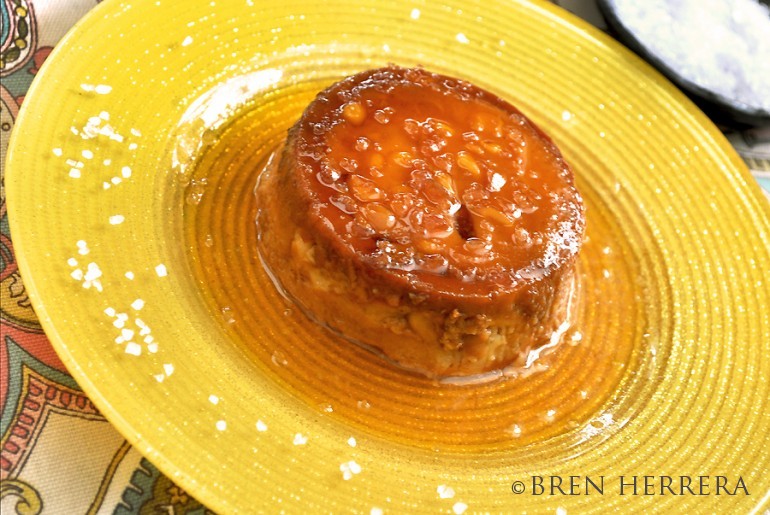 In honor of  all wonderful father’s and my papi in particular, here’s a flan that’ll have any of them slide down in his chair as he bites into a spoonful of creamy corn custard with a generous amount of  oozing caramel tantalizing his lips! This is fusion as its best.

Happy Father’s Day! Happy #FlanFridays and here’s to all the wonderful men that are called dad! From me to you, papi!

Visit my Facebook page to see some wonderful things to see and do in Atlanta for  Father’s day.