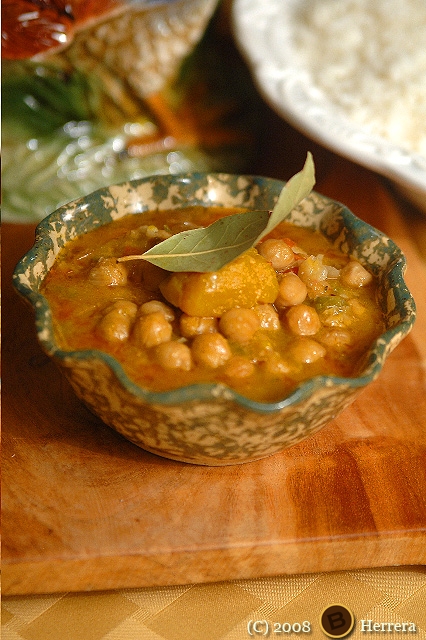 ¡Y que mi gente! Thanks for being patient while I got it together again to write. I started writing a completely different post this morning, but halfway down, I decided to look at the corresponding picture and realized it was crappy. Major shux because it’s a great little party hors d’oeuvre to serve and a great story about my dad. I saved it until I make it again and take a better picture.

That’s what happens when you’ve got a group of 28 hungry execs waiting to eat what was promised for their conference. Next time, they’ll just have to wait until I’m ready to serve.

So I had to think of something else to write about. Something I already had a picture of since I’ve done no personal cooking this week.  Two, 3 hour cooking classes on the same day leaves no time for pretty pics and certainly no home eating, thus the taco hell drive by thrice already.

I’ve not talked much about it before, but I figured I couldn’t go wrong with showing you a raw picture of one of the dishes from my cookbook!

For those of you working on a book, you know it’s not an easy feat. The styling is a task. The patience is a mother and the photographer can be a right out monster.

This particular shot was taken in September and took over 2.5 hours. I was so done with the darn beans I could have smashed and smothered them all over the camera lens. Would not have been nice, but damn, how uncooperative can a few chickpeas be?

While my great friend Michelle and I were styling the set, Dave was achieving magic with the lighting and my mom was doing the cooking. That’s the only real way to get this done. Kudos to you that do it all. Well, to my credit, most times it’s just me and Dave. The assistance is so crucial and I’ll cheerfully take it every time.

Oh, and since I do not use food tricks to make food look “fake”, it takes us a bit longer to make it all work. No glue or milk or boiled eggs under the beans or any of those things the pro’s use… We do want to eat our food, after all!

Okay, so this classic potaje de garbanzo (chickpeas) recipe that will be in the book calls for chorizo, or Spanish sausage, something you should know I don’t eat. But in order to really give Cuban food it’s glory (and unbeknownst to me) my mom threw a piece of chorizo in the pot, though I begged her not to. Not for pictures’ sake, but rather b/c I wanted to eat some expo facto.

Whatever, it’s her kitchen, so the sausage made it in which gave the garbanzos a really nice aroma while we were shooting. There are 6 or so beans we cook all the time, and I would have to say this is my 2nd favorite, with split peas being number uno. Love those little green things. The trick to cooking garbanzos is making them in the pressure cooker! Of course the pressure cooker! Have any of you ever made chick peas in the lost art utensil? If not, you should definitely try. You know these beans are really hard and require tenderizing. The pressure cooker (with a little bit of manual mashing) gets them to the point you want them.

Cooked in about 45 minutes, these bad boys make me happy. Not as happy as the new pair of pumps Dave bought me for my b-day (pictured under Style Paella over to the right), but good for any beautiful cold, fall day.  I also make this potaje with tripe. Absolutely delicious.

Since I can’t share the “to be published” recipe of these utter goodness, hearty and ultra healthy beans, I’ll gladly share with you a quickie of sorts. This version omits some of the seasoning and added ingredients. There are benefits tho: no soaking, no fear of pressure cooking, no manual mashing of beans & less cooking time than dry, uncooked beans). Buy a can or two of Goya chickpeas, make a sofrito (refer to one of the “related posts” below for making sofrito) and cook them for about 20 minutes in a regular pot. I promise you’ll like them! Porsupuesto the full out recipe is the preferred cooking method and desired result. But we’re in a time crunch right, with it being the Holidays and all?? Canned beans might just become your new friend! Plus I suspect most of you don’t own a pressure cooker, yet!? 🙂

So the shoot was done, and Dave and my cuz ate the beans (and dad for dinner). Michelle and I moved on to the next recipe which was arroz con pollo… another pain in the butt dish to style! But at least she and I did eat that one.

A Lesson in Pressure Cooking & Some Food Too

Add 4 cups of water, chick peas, butternut squash, and bay leaf to medium pot. Season with salt. Cover and cook on medium heat for about 10 minutes. While garbanzos are cooking, make sofrito. Over high heat, heat canola oil. Add peppers, onion, and garlic. Stir and add in dried seasonings. Stir and cook for 3 minutes, or until onions are translucent. Add sofrito and chorizo (optional) to the chickpeas. Stir well. Cover and cook for another 10-15 minutes over medium-high heat. Uncover and add olive oil. Stir. Let simmer for 5 minutes. Serve with white rice. Garnish with thyme.

4 months ago by Bren Herrera
﻿ A favorite steak sauce I created years ago and have modified several times makes it on this Father's Day segment with my good friends at Good Day Atlanta. Since most of us are still practicing social or physical distancing, staying in this weekend allo...

6 months ago by Bren Herrera
Who knew coming up with recipes for kids to make would be such a fun task?! I had no idea, really, what I was getting into when I decided to offer free cooking classes for the kids  (no matter where in the world!) every week since we're sheltering in place a...

6 months ago by Bren Herrera
Friends! Are we tired of being in the house yet? I'm on day 40 or something like that and I'm going a bit batty, no lie. The one great thing about being inside so much is ALL the cooking I'm doing. The quarantine cooking is a real thing now. I'm cooking wa...

7 months ago by Bren Herrera
Hey, friends! We are mostly working from home now and you probably are trying to figure out how to keep the kids entertained and fed at the same time. I would love to help you take away some of the stress but also engage them in something they could learn an...