One of my first friends in Atlanta quickly became my closest confidant and go to chica. The bond was instantly made when I found out her background. She’s Brazilian, born in  New Jersey and raised in Miami. Not just in Miami, but Hialeah, the “Cuban of Cuban” nooks of the tropical city. Growing up and being raised around mostly Cubans, M has become an honorary Cuban and really exemplies all of those wonderful traits of my culture.

She speaks like we do, gestures like we do, whips up espumita pa’l cafecito like we do and eats all the food that makes up our cuisine. If I had to guess, tostones are her favorite.

While she’s Latina in all sense of the word, she’s also acclimated very well into mainstream America and embracing all things Americana. In M’s world that means not cooking very often as she’s a established herself as a successful career woman and now a wife and mother to a young toddler. This leaves even less time for her to cook every day, unlike most Latinas I know (at least in my mom’s world) have been taught to do. I do get we’re living in different times and in instant gratification psyche, but it’s second nature for me to get up and think about what will be on the dinner table that night.

I’ve tried to convince my dear chica that cooking at home is so gratifying and far more economical to eating out as much as she and hubby love to do. She once told me she’d rather spend $200 on a fine dinner than on a bad ass pair of shoes! My God I about passed out. Perhaps because I cook for a living and can prepare just about anything for myself and those around me, I thought the notion was blasphemous. I do love a great ambiance with full service, but a fabulous pair of shoes will last me a lifetime!

Many a times I’ve eaten M’s house where the fare was pre-cooked plantains, store-bought potato salad, pre-mixed margaritas and frozen garlic bread. I’ll take it since it’s usually good and edible enough for me go back for seconds. But as my dear friend, I have a duty to guide her in the right direction and encourage her to dig deep into the very roots and culture that’ve defined her today. I’ve implored her to just take a little bit of time out of her schedule (even sneak in some time at work) and do some blog and cooking site browsing. The amount of information out there to gather and stash up options to offer up during her impromptu Sunday trysts could make her one well-rounded chica. I mean how much easier can it get when you  have a close girlfriend to support a delicious lifestyle. Just ask!

In my earnest effort to get M to cook more home-cooked food be at Latin or not, we’ve had conversations on how easily she can incorporate bold flavors and simple ingrendients to make satisfying food. The goal has been to break her away from defaulting to packaged foods. And, finally, after years of suggesting this, that and the other (and to her credit she’s text me plenty of times asking for a quick recipe), M has started to branch out and play around with some of our own staples and has blown my mind even more when she’s stepped out on faith and experimented with new ingredients and flavors.

Last weekend, during Memorial Day, my girl went all out and laid forth a fabulous spread with some fave Latin party food and some not so Latin fun-sized appetizers to fill us up. She earned a foodie graduation and has broken out of the mindset that fresh home-cooking is undoable and takes too much time. She found her formula: cook on Sundays!

No matter the day, it was great to enjoy perfectly seasoned fried yuca, one of my “I’ll fight you over the last piece” kinda food and the most adorable and party perfect pesto-stuffed cherry tomatoes. I was over the top tickled when she admitted the pesto recipe came from a Publix circular! You gotta start somewhere, right! From the taste, I could tell she put all of her heart and passion into it. And at the end of the day, that’s what cooking is about! Putting all your love juice into it!

And you already know I ate about 15 poppers back to back! If you’ve not seen them before, they’re a party lineup must! I’ll share recipe when I make the for myself. 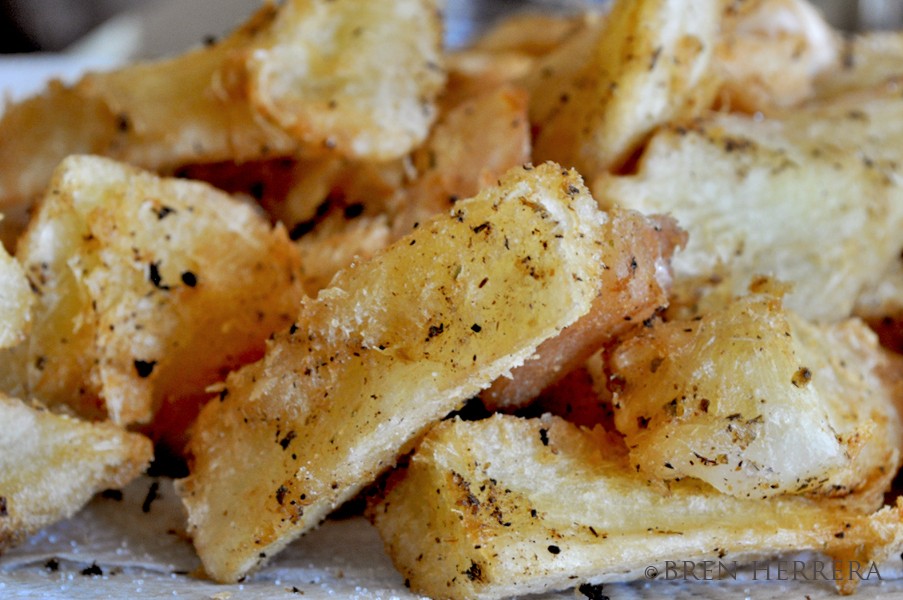 When this sweet bestie M invites me over for dinner, it’s sublime to see her smartness pull out the cooking skill she’s got hidden up in that Brazilian body.

And I do my job by eating it all up!

From her kitchen to your eyes, feast on this delicious and down home Latin soul food. The yuca fritters are delightfully simple to make and will satisfy every single guest! And you can say you made them from scratch.

(And, if you’re wondering, I do have an over-the-top, to kill for super duper garlicky dipping sauce to make you drool even more! I’ll share on the next yuca talk!)

*This post is part of my wonderful involvement in the Latina Smart campaign which explores and intimately touches on preserving Latin culture!