High Tea in a Cuban House

Our mission in the 5 Star Makeover group this month was to create a virtual high tea hour as most in the UK have traditionally enjoyed in centuries past. According to Wikipedia (enter eye roll), high tea or light meals were served between 5 & 7 pm, in order to quench any hunger pains before the big sit down.  Every country served(s) different foods or styles of meals depending on their cuisine. Most commonly dished out servings included fish and chips, mac-n-cheese and finished off with breads, biscuits, jams and the like. Tea as a drink was also enjoyed, mostly in the early afternoon and served with warm milk and honey.

I’m sure there are more elaborate histories of high tea, its genesis and how it evolved, but for now and for the sake of using laymen’s terms, let’s call it “Happy Hour!” If you consider the time of day and purpose, it only makes sense no? In the U.S., happy hour is that time right after traditional work hours, usually starting at 5 pm, where friends gather to relax and enjoy some light, hot food and cocktails. Dinner most always ensues, at least in all cases I’m familiar with. They woo you by offering ridiculously low-priced ‘rita’s and what not.

My idea of high tea in the most of honest form entails chips, chocolate and espresso. I’ve noticed those are the things I flock to right before dinner. As it would be, I decided to interpret my pre-dinner noshings into something a bit more sophisticated for the challenge. I was going to create a happy hour of fanciful appeal. 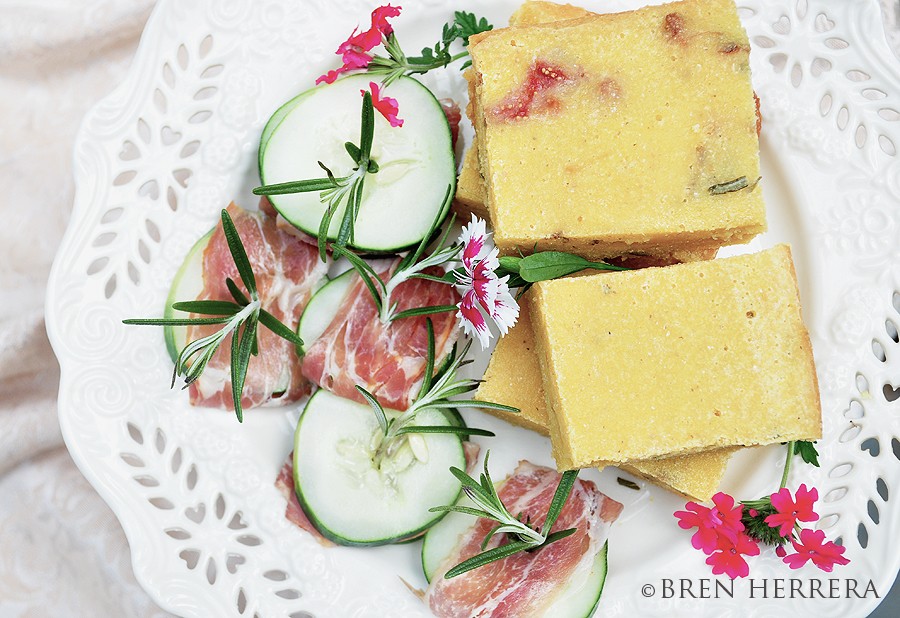 We have happy hour at my parents house just about everyday. It all starts with a serious partido de domino right about that same high tea time hour. Right before our friends occupy the family room, Mami gets busy whipping up some snacks for her playing frenemies. Most times, it’s crackers, ham, cheese, grapes, espresso shots and pita chips.

If she delegated feeding her teammate and opponents, I’d consider a few options that just happened to be present this past week. Having just tickled my mother’s fancy with some peppery Southern-style cornbread I made for a client’s birthday party last weekend, I thought it would be completely fitting to make a daintier version of my favorite bread. The concept was made better when a friend recently brought me a bucket full of figs from his tree, which made their way to the batter. And, Papi just so happened to pluck a great bunch of rosemary that’s perfumed the kitchen. I got excited at the thought of fusing it with the figs. I’m already thinking of a flan or ice cream version of it.

The cornbread alone wasn’t enough to classify as an early bite, causing a bit more thought into a perfect pairing. I still wanted to please Mami’s likings and came up with a petite cucumber and caliente capocollo sandwich of sorts. I did two styles: one was wrapped in the ham, the other was stuffed in between two slices; both were closed off with short romero sprigs. They were perfect for her. Nothing complicated and easily assembled. The marriage  of a cool cumber with a peppery thin slice of ham was exactly what the warm bread needed to be complete.

The cornbread turned out to be an experiment of ratios. I played around with the cornmeal and flour quantities and ended up with more of a polenta-like cake than crumbly bread. It wasn’t exactly what Mami had in mind, but I caught her eating a few pieces. She definitely enjoyed the figs and rosemary touch, but begged me to make the same exact batch I made for my client.

I’d make this combo again, only I’d defer to my tried and true cornbread recipe which doesn’t call for flour! I don’t have it written down so I’ll have to make it again so I can share. But, the best part of this version? The figs by far! They added a lovely texture to the less than fluffy bread and complemented the bits of rosemary. If you want the recipe, email me and I’ll shoot it over.

Adding a beverage to the early meal experience was the last thing to do. I was recently introduced to Le Palais des Thés  chilled tea collection and couldn’t help but add it to the mix of the two savory  options. The complimentary package I received was citrus flavored and light and smooth enough to round out all of the flavors involved. Initially, I wasn’t going to include tea, but it was almost requisite. Almost. No rules here, but adhering to some of the customs creates a moment of authenticity, even if modified. Clearly, I couldn’t resist adding rosemary sprigs to my iced wine glass.

You already know the tea was refreshing and simply decadent alongside the fig bread  petite pepino sandwiches.

If were hosting this for real,  I’d add lemon sorbet and call it my swanky cocktail hour.

If you can’t top what other cultures have started, you might as well join them and do your own thing! I can get used to fancier light meals before our heavy helpings of rice, beans, carne asada and yucca! 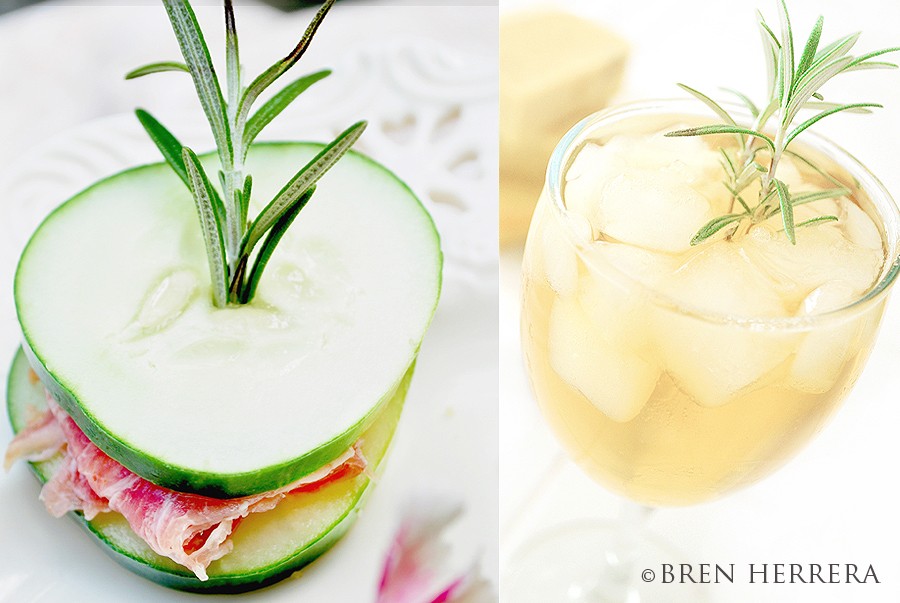 0 thoughts on “High Tea in a Cuban House”