Home Run Inn Frozen Pizza. A Departure From Home Base & a Doctored Margherita

I grew up in a very happy home. A home filled with tremendous love, constant engagement, social stimulation and phenomenal food. Next to hugging and kissing us like a bird hovering over her eggs, there was no better way Mami showed her love for us than by feeding us six day a week. Note how I left Papi out of “us.” That’s because Papi is part of “us” and the pack leader.

He set the standard. Growing up,  the frozen, boxed, canned and pre-pacagked food markets made no money off our big familia. Not a single  quilo.  It was written in stone that eating any of those types of foods were abominable and completely not permissible in our casa. That meant Mami always cooked the freshest of food for breakfast, lunch and dinner. With the exception of our earned Little Debbie snacks, everything was made from scratch. We’d even go to Giant, our local grocery store and make our own peanut butter. If Papi got the slightest whiff of “that” smell, his appetite was pretty much written off.

Not much has changed! Mami cooks 4 times a week instead of 6 — most times.  And where Mami benefits from changing times and less time in the kitchen, Papi enjoys her sharing the floor. More often than before, Papi can be caught cooking up some amazing meals. Those are sufficient changes. The beauty in all of this is that we still eat fresh meals made with unparalleled love.

So, I give it to Papi and Mami. I appreciate his tenacity in ensuring we never ate leftovers and such and applaud Mami for never wavering. However, it did create a mini food monster in me. I don’t turn my nose up to the litany of alternative foods available in the grocery store, but I do stand by using the freshest ingredients when possible. But I have to be realistic with myself. I’m single. No husband and no children. I simply don’t have the same responsibilities my parents had in feeding a greedy bunch.

That means I’ve learned to become a bit more flexible with what I eat at home. I’ve learned to embrace canned beans, jarred peanut butter and boxed soup (I’ve had some organic varieties which are to be reckoned with!). However, I’ve yet to embrace frozen food. Consequently, my freezer is empty. In fact I’ve considered storing pantry foods up there since I’m short on cabinet space. It’s been a long uphill battle trying to get used to the idea of frozen comida, outside of certain vegetables (like yucca–I’m a big, big fan of the frozen root!). More common American staples like pizza are a no-no. We used to make our own and occasionally fight over what type we’d order in. 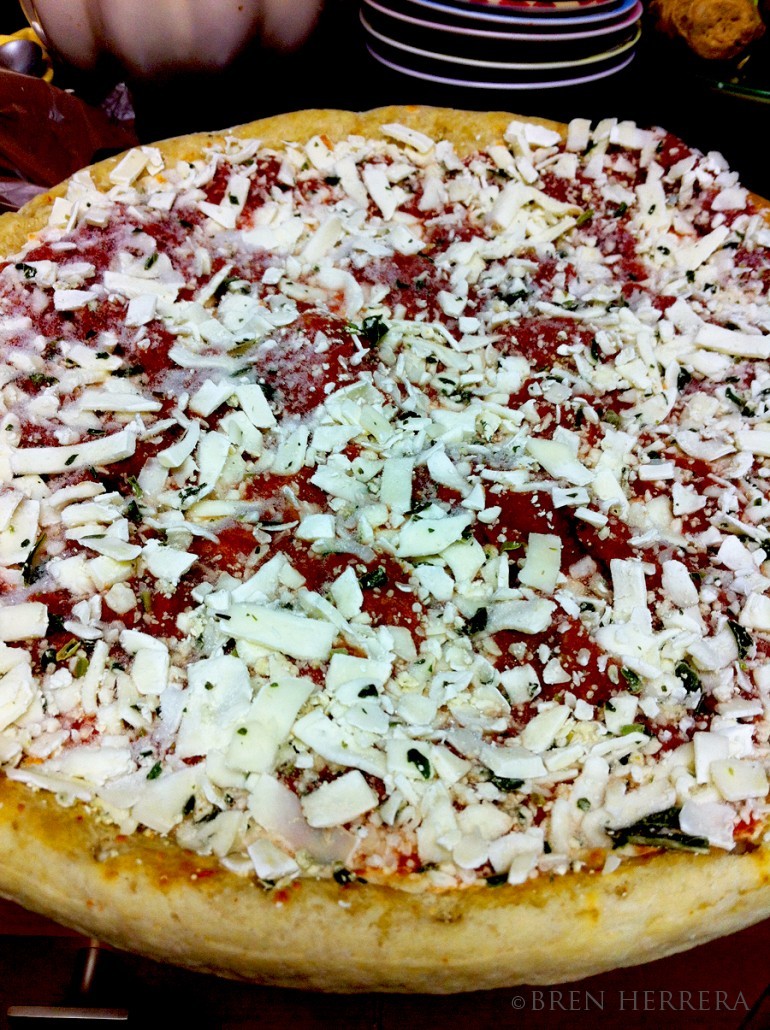 When the perks of being on Twitter presented me with a  coupon for a frozen pizza and a spunky pizza cutter from Home Run Inn Pizza, I couldn’t help but chuckle. Really? Who eats frozen pizza? Is that not the biggest faux pax in casera culinary trends? I was so caught off guard that I went for it! Their press materials were so impressive and so convincing, I was intrigued to taste the hype.

Seeing five different flavors at Publix didn’t excite me. However, the vast frozen pizza section did. Who knew so many pies were in the market?!  I had no clue. I went for the ultra thin cheese and the Margherita– because I love tomato and basil.

For $8, I was hoping the pizza knocked me out with all its claims: Chicago’s no. 1 pizza and pizzeria, 100% fresh and natural ingredients simply frozen, and big, big claims that it’s the same exact pizza made and served in one of their brick and mortar stores. Since I can’t confirm that monstrous claim, I’ll leave you with my brief take away. 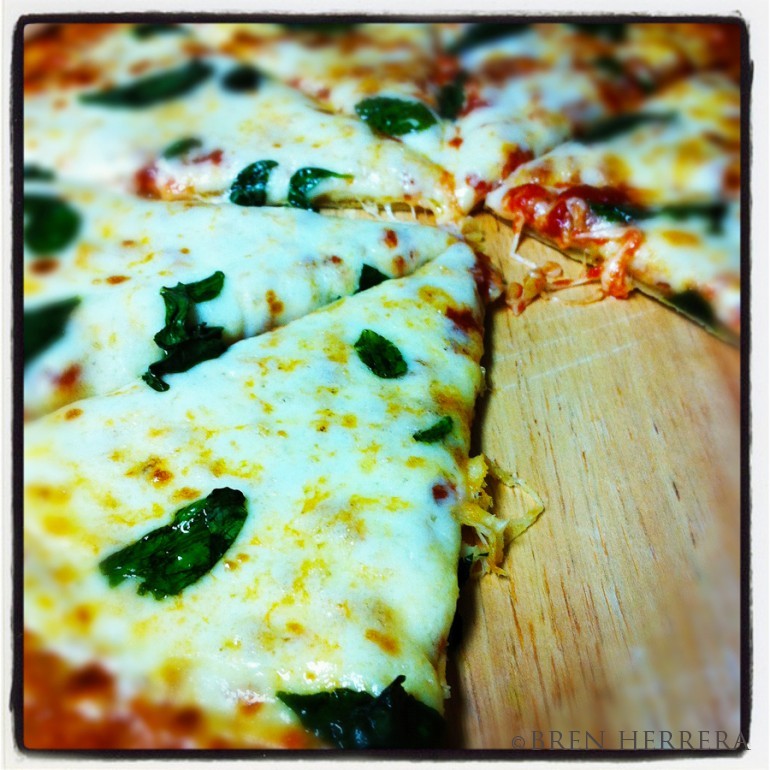 The crust was on point and really thin — one of my pizza biases. It was a bit too flaky and having more resemblance to great breakfast pastry, but generally  good.  The tomato sauce was tasty but too runny.  My guess is that  the process of defrosting releases the excess water the tomatoes hold; or the built up condensation (as you can see in the frozen pie above). They did taste like fresh tomatoes and not the preserved canned ones — a definite plus. The melted cheese was just how I like my queso on a pizza and browned right where it needed to. But, the biggest problem I had was the lack of basil on the Margherita. I happened to buy a small pot of the fresh herb in anticipation of needing it. When I opened the package and saw mere speckle of minced basil, I was taken aback. I was disappointed but not surprised. I mean, how much could I really expect from a frozen pizza.

I added a generous amount of my fresh basil leaves, baked the pie for 10 minutes and cut it up. For $8, it was lacking mass and size. For frozen pizza? I’d say it’s pretty darn good and appetizing  all things considered. I’d eat it again– if I were in a serious bind to feed friends and didn’t have time to make my own dough. I’d even treat myself to one if I were starving and needed a quick fix. I actually did  just that a few days later! Went for the cheese and doctored it up again. Not shabby at all. Though,  I’ll  stick to my  neighborhood pizza joint where I can get a bigger and made-to-order pie for $13 when in a hurry.

What do you think??

I posted these Instagram pictures on Facebook when I had the pie a few weeks ago and surprisingly received some honest feedback from native Chicagoans. The general consensus confirmed  they are known for the best pizza in town. For now I’ll have to take their word for it. Barring the insulting amount of basil on a “classical” Margherita, I’d say Home Run Inn does a respectful job of mass producing frozen pies. The plain cheese turned out to me my fave pick. And while conceptually the Margherita wants to be that classic fave, they’d have to  add a 1/4 cup more basil. Theirs is truthfully a far cry from a traditional one and more a 2nd base hit.

If you’re in Chicago, I’d love your thoughts on Home Run Inn. Have you had their frozen pizza? If you’re not in Chi-town but have had it, I’m curious to know your impression. I’d love to give it a third try  and just maybe keep a stack full for rainy days!

0 thoughts on “Home Run Inn Frozen Pizza. A Departure From Home Base & a Doctored Margherita”