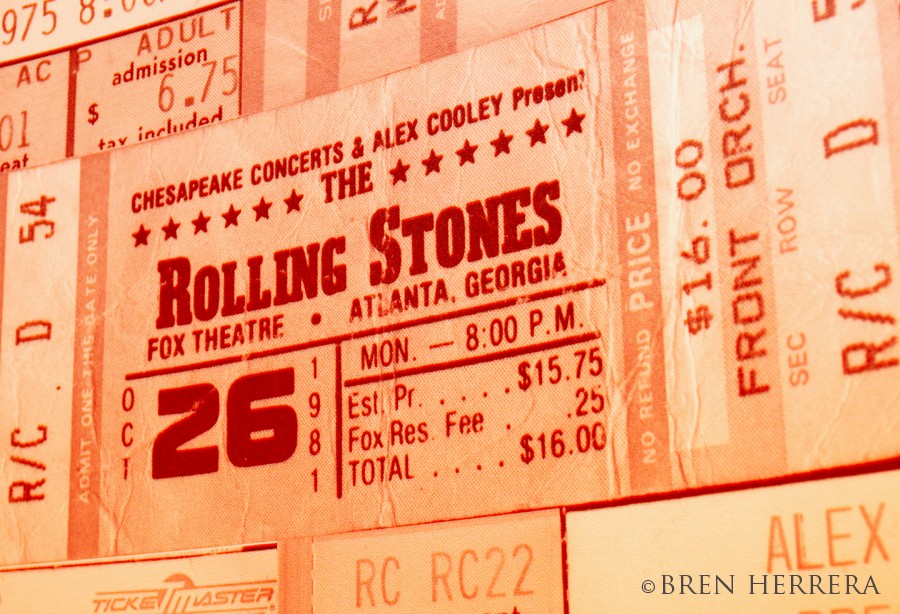 Atlanta is known for being home to world reknown artists such as Gladys Knight,  John Mayer, Cee-lo Green (and perhaps his purring Persian cat), Usher, Toni Braxton and even the lovely yet late Whitney Houston. She and Bobby had a home in a nearby suburb.

Music has a strong footprint in the art culture of this quasi metropolis Southern city. That major acts are born here both literally and figuratively can be due in part to the diverse number of performing venues available. The Fox Theater, Atlanta’s oldest stage sits in the crux of the city’s bustling night life (hardly in comparison to comparable large cities) and has opened its curtain to super major acts like Elton John himself, Elvis Costello, Bruce Springstein and the Rolling Stones, to name a few.

Right across the street from the vintage-styled theater (tune in to any episode of Real Housewives of Atlanta or The Braxton’s Family Values and you’re sure to see the bulb lit sign bearing three letters) are several chic hotels for locals and visitors to enjoy.

Hotel Indigo Midtown, a brand within the InterContinental Hotel Group, recently undertook some serious renovations, all inspired by the music played across the street.

The lobby is the best part of the hotel, so far. Bearing bright colors contrasted with ambient lighting, it reminds me of a chilly spot in Manhattan. The check-in counter is funky with its half moon bay designed to mirror organ pipe is backed by a wall with bigger than life ticket stubs from real performances throughout the years. While its purpose is simply to connect both buildings, it does a good job of sparking up conversation with the casual concierge whom will offer you a bottle of water and chocolate nibbles. 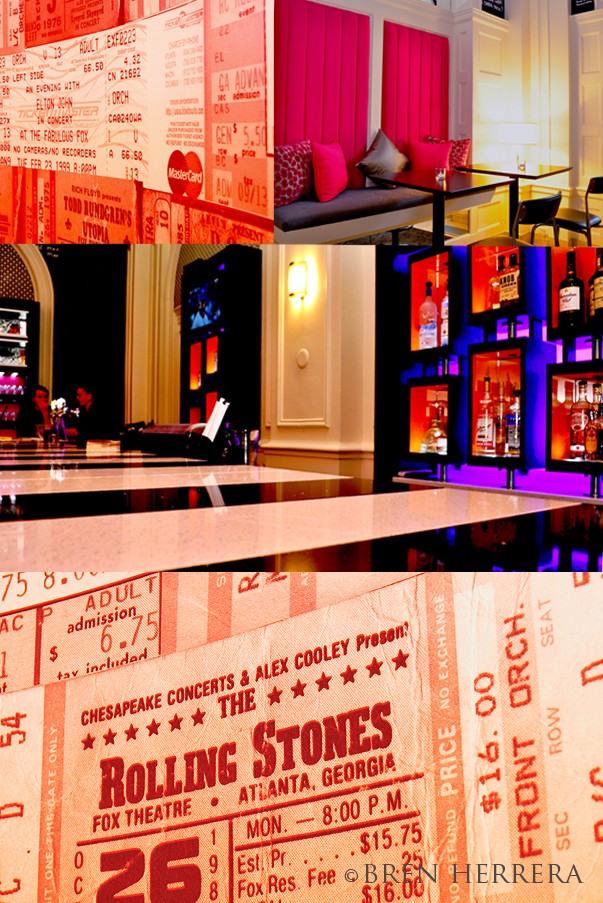 The rooms in hotel Indigo haven’t been touched from what I saw. In fact, they still have be beachy décor and outdated graphics and prints. It could still work if the lobby didn’t look like a modern recording studio that happened to have a swanky bar and colorful seating.

The bites at 683 Bar & Bistro are a few notches above standard bar fare. The tangerine and beet salad was full shock of color and flavors which sing really well together. Though the combination of goat cheese and walnuts is pretty typical, the poppyseed dressing allowed it to stand its own ground.

The beef tacos, a guest favorite, are nicely assembled with seared sirloin and a caliente chipotle sauce. Unlike other bar tacos I’ve had in the city, the vegetables are fresh and crisp. The tortillas on the other hand were just your average pre-packaged stack you can pick up at a Latin American market. Corn over flour would have hit the spot, but  for $8 you’ll be sufficiently satisfied without feeling you’re being robbed.

One food fact of note: they do source all of their solid cheese and honey from local farmers which adds finesse to their approach to offering fresh and easy food. 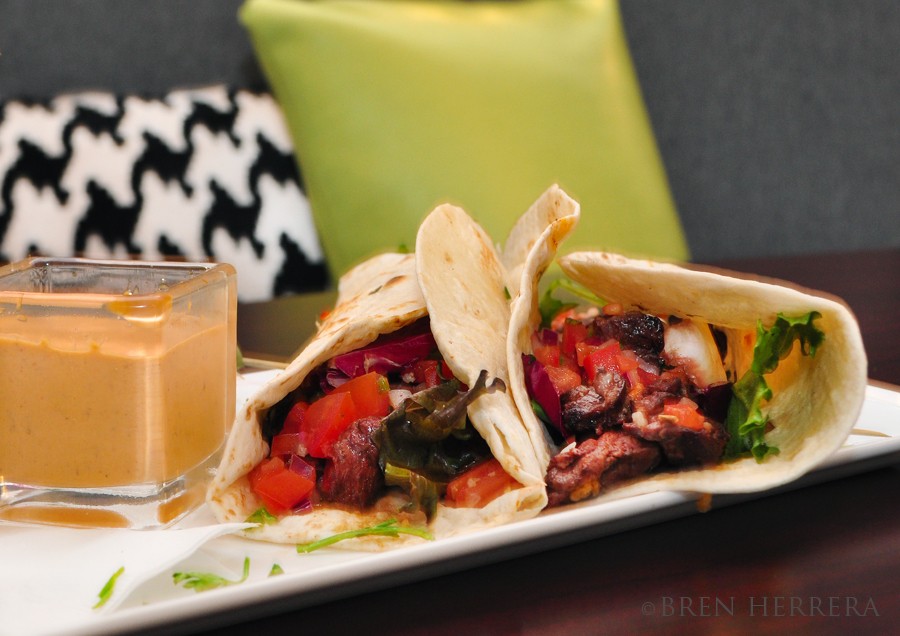 If you’ve convinced yourself that hanging in Indigo’s lobby and lounge is cool, you’ll want to make sure to take full advantage of the self-serve wine bar. I’m not quite sure if the idea is novel, but it totally tickled my fancy. You can choose to enjoy a sample, half or full size glass from 8 or so wines by inserting a card andpressing the button for the desired amount. I found it to be kind of fun and very convenient if you’re short on patience and don’t want to wait around for a server to refill your glass.

The actual seated bar was my favorite detail with its keyboard designed counter and electric blue lighting which mimics musical notes. I didn’t notice any missing top shelf options so your sure to get a cocktail of any kind. In fact, I’d highly recommend the caramel popcorn martini which had me begging for two more. Initially it was too sweet with swirls of caramel in the glass and on the rim but I had no qualms asking the server to dim down the amount. That only because I was also ripping to pieces a chocolate torte which was good enough to be in the lineup of a decadent dessert tour.

This makes the bar a desirable spot for cocktail hour; even for locals. 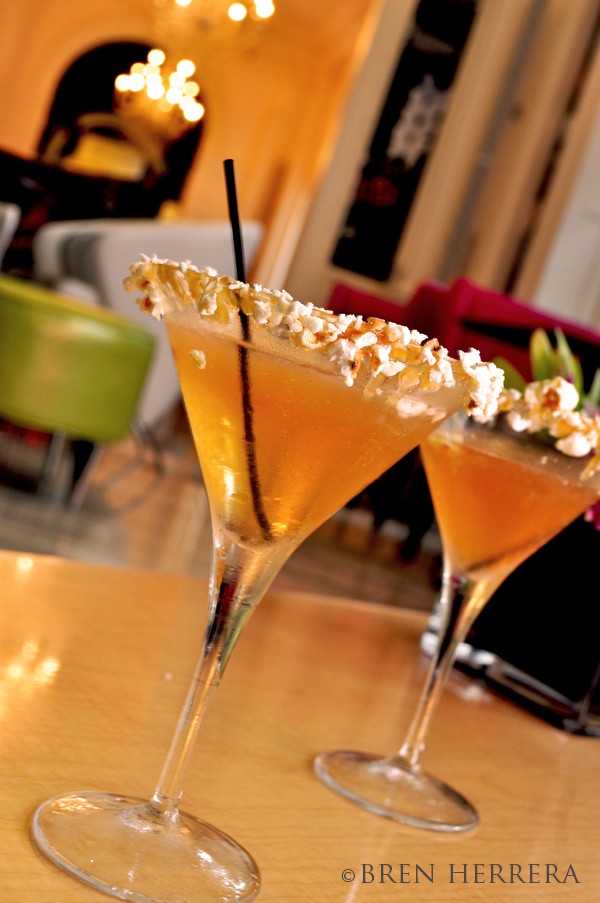 While eating and sipping on a fanciful and jovial libation, take a look at the walls. They’re intentionally decorated with chalk and paper posters of old musicals, past concert dates and artists signatures, all which express true graffiti on the walls of the old projection room of The Fox. This lends an intimate look at the thoughts artists had before and after shows. 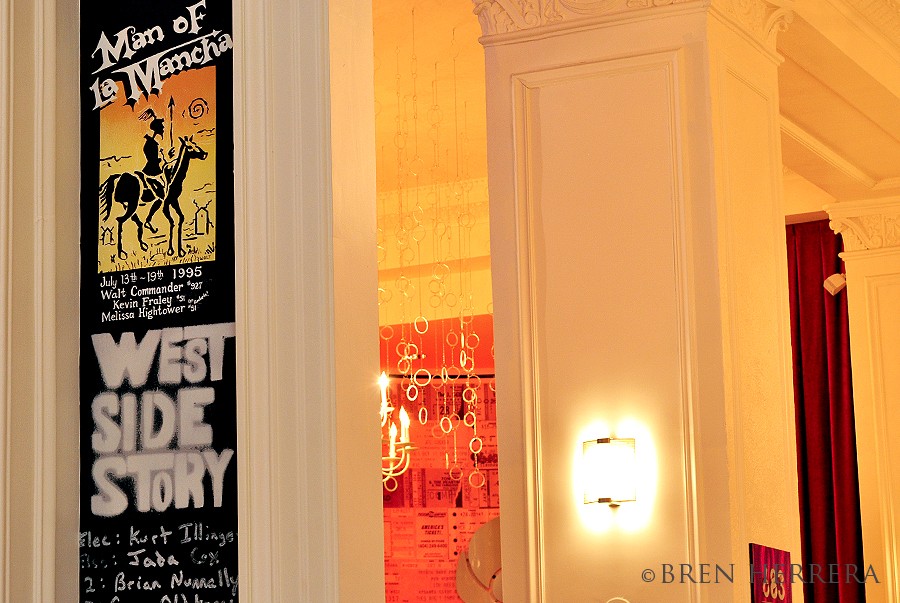 If visiting the bar area isn’t enough, hotel management encourages using the extended seating area behind the check-in area. A hot pink faux leather booth opposite a duo of bright lime green chairs is relaxed enough to host a meeting or a simple afternoon tryst with yourself. .  Enjoy music and artist-inspired books stationed in the built-in bookshelves if you plan on hanging for a while. A coffee station that operates in the same way the wine dispenser does will easily help you loose track of time. Self-service, including free-wifi are major highlights Hotel Indigo offers. It’s their way of allowing you to express yourself. Sounds like a musician, right?

Undoubtedly, it’s the only hotel in the city that juxtaposes sleep with live music, the former which you’re likely to be deprived of if you’ve decided to book a weekend’s stay on Peachtree St.

I live here and I wouldn’t mind a sexy chic stay at this vibrant joint. Especially if I can order that caramel popcorn martini to my room! 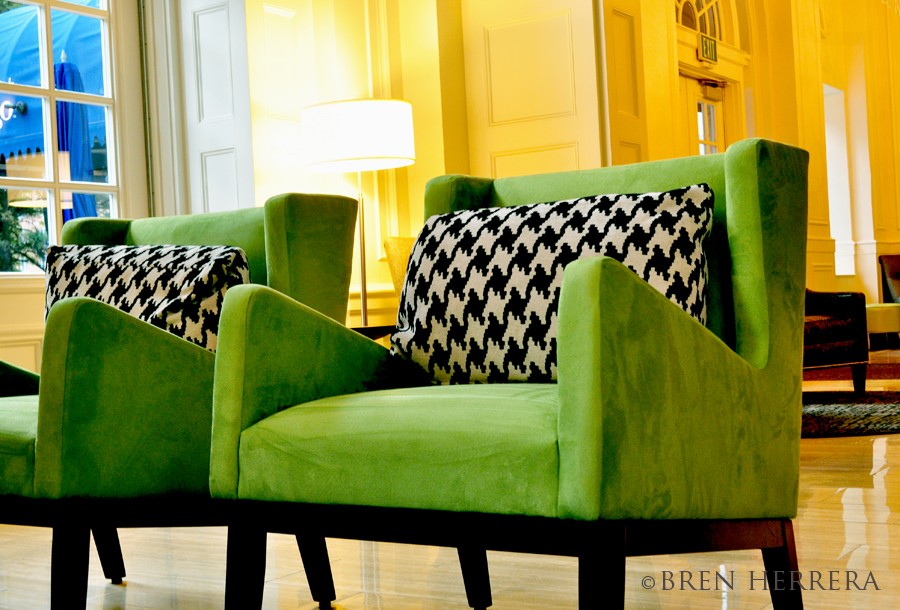 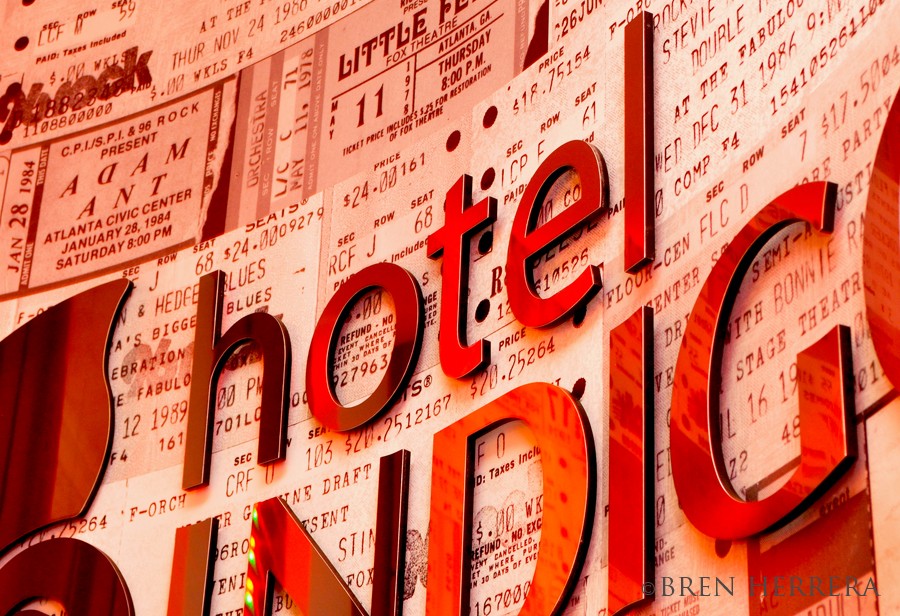