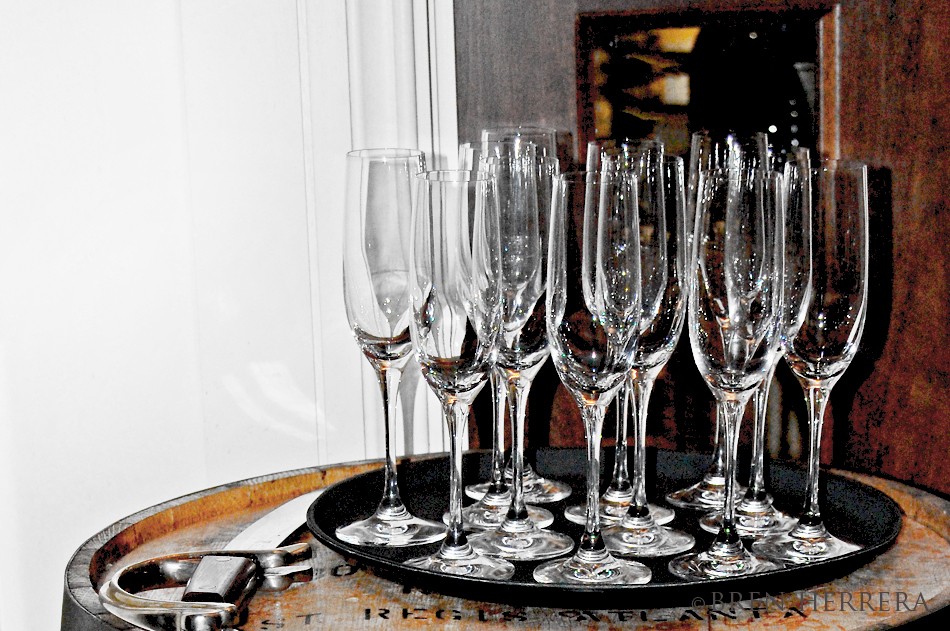 {I wrote this back in 2009 for ‘How Stuff Works’. It was finally published sometime last year. Funny how the internets work. I accidentally came across it while Googling “good Champagne.” So, I’m so thrilled to share that it was a huge article I composed, taking one entire month to research, interview, and do more research. I learned so much about making Champagne, that I now deem myself a bona fide connoisseur and even would dare make some! The article is quite long so I’m going to split in two posts.  Part I is published here. I hope you find it as informative and entertaining as I did while researching and writing. B-}

Though the process of making Champagne is mostly over once the cork goes into the bottle, there are a few other steps that have to happen before the bottle is ready for sale. Yeast continues to grow and split, giving the wine its flavor. However, the yeast has to be removed through a process called riddling. A person called the riddler places wine bottles upside down at a 75-degree angle, and turns them one-eighth of turn every day [source: Pandell]. A little shake and bump helps, too. This can be a mundane task, but it’s necessary to allow the yeast to collect at the top for removal.

The yeast leaves the bottle through disgorging. Here’s how it works: The bottle rests upside down in an ice-salt bath. A plug containing the dead yeast freezes at the neck of the bottle. The trick is removing that frozen plug without sacrificing the taste and quantity of the carefully crafted Champagne.

{READ: How Champagne Works, Part I}

Once the cork is removed by hand, the pressure of the carbon dioxide gas built up in the bottle forces the plug out. Doing this requires the loss of a controlled amount of Champagne. To make up for it, a certain amount of white wine, brandy and sugar are added to the final product, to adjust the alcohol and sugar levels. Finally, the cork is placed back on the bottle and tightened down with wire. This last step raises the pressure again, keeping the bubbles inside until it’s time to pop the cork.

This process results in four types of Champagnes: A brut Champagne is characterized as being very dry and not too sweet. Extra brut is the driest and least popular, according to wine specialist Stacy Slinkard. Sec Champagne is dry, but not as dry as brut, and demi-sec or non-brut is the sweetest of them all. 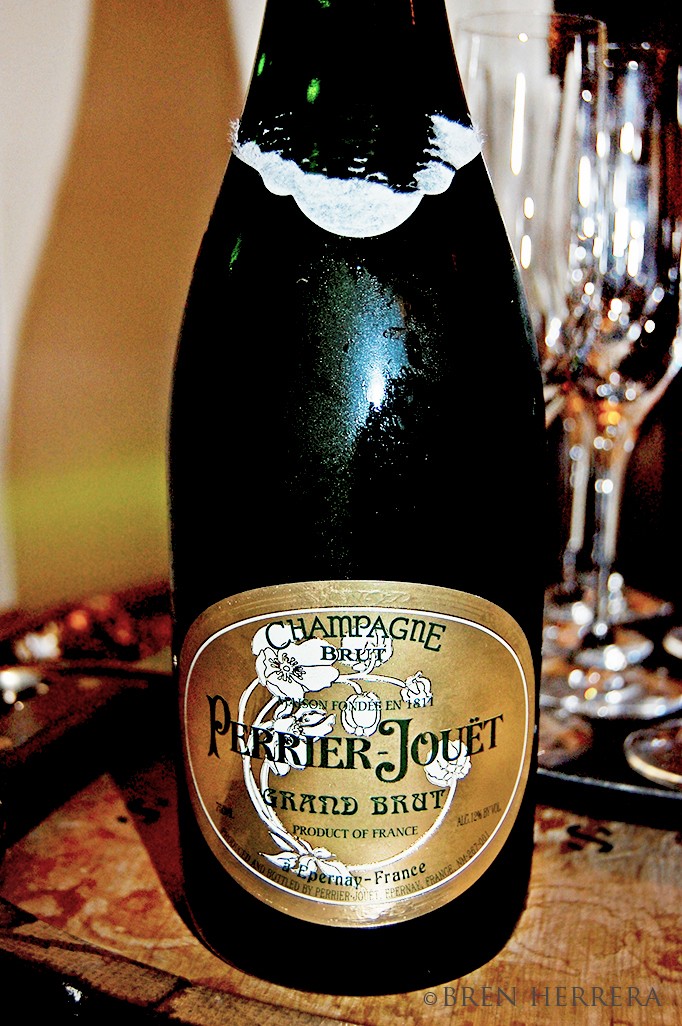 THE HOUSES OF CHAMPAGNE

We mentioned earlier the two cities that make up theChampagne region: Rheims and Epernay. The world’s most famous Champagne houses reside in one of these two cities.Wine historians say Champagne was invented in the 1700s as an accidental discovery by Dom Pérignon. He was a Benedictine monk who worked with wine and put great passion into chemistry and developing something other than still and red wines. His statement to other monks, “Come quickly, I am drinking stars,” ultimately alluded to his misplaced discovery of what we know to be Champagne [source: Marshall]. The House of Möet & Chandon, from the Epernay village, takes ownership of his discovery and has named its most popular Champagne after him.

Other famous houses of Champagne market their Champagnes as the best in the world. But what really makes Champagne better than any other sparkling wine? Climate, soil quality and the precise locations of the vineyards determine the quality of grapes used to make the still wine. Different houses plant and ferment grapes differently. Additionally, the blending or selecting of the cuvée is probably the most important element in making Champagne.

The houses, depending on their specialty and distinct qualities, establish their fermentation times and exercise unique blending techniques. One thing to note is whether the Champagne is vintage or non-vintage. Non-vintage Champagnes are made up with several different blends from various years of grape harvesting. They only ferment 17 months. In contrast, vintage Champagnes spend at least two years working their magic. Vintage Champagnes are blended wines from one particular year [source: Johnson and Robinson].

CHAMPAGNE AND THE AOC

Because Champagne represents and is consumed by the upper echelon, it is understandable why wine producers in other regions make similar sparkling wines. However, in order to protect the quality of wines, French wine producers must adhere to strict guidelines as outlined in the “appellation d’origine controlé,” or AOC. These guidelines apply to both wines and Champagnes. The Institute National de L’origine et de la Qualité has established certain guidelines as a way to limit poor-quality wines and Champagnes that may come from mediocre lands and vineyards, and to establish consistent uniqueness and authentic characteristics from varying regions. If a wine producer or Champagne house wants to boast being among the best, it can apply for AOC status, which will be stamped on the label of its bottles. The criteria for being a top producer aren’t so easy to come by and include the following: acceptable land usage, proper region climate and soil quality, variety of grapes used, alcohol level of the wine and taste. 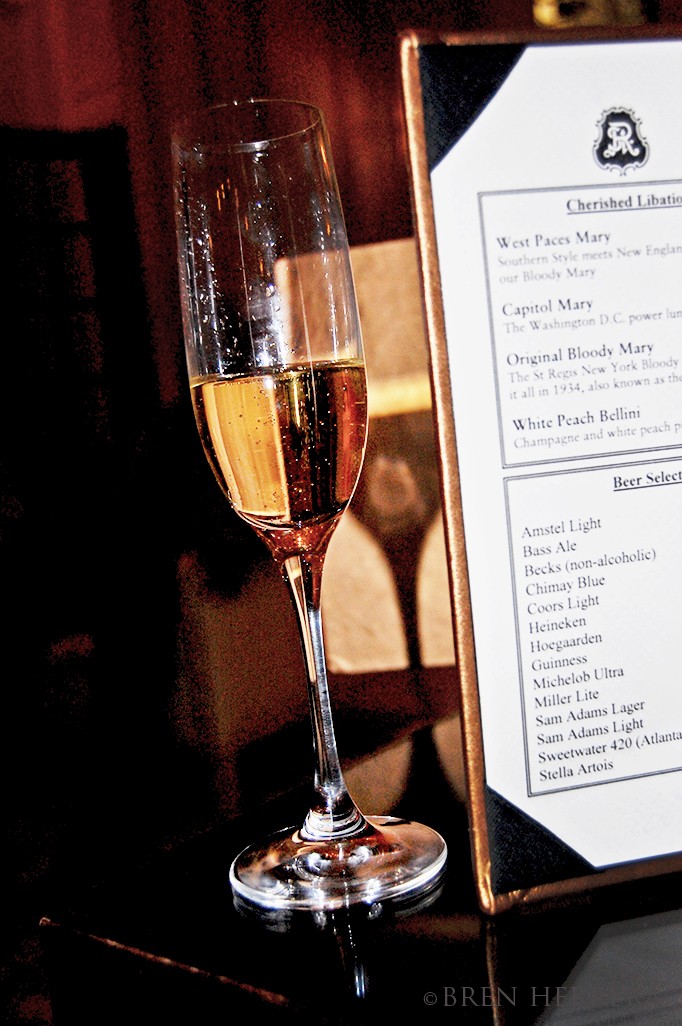 Bottles bearing the AOC mark have been scrutinized by a panel of tasters that sample all wines applying for this prestigious accolade. So, when you see a Champagne bottle bearing the words “appellation d’origine controlé,” you’re drinking a bottle that has passed all criteria and quality requirements. This AOC process contributes to the high price tag on Champagne, but ultimately ensures that what you’re drinking is bona fide extraordinaire.

Although French law dictates that Champagne must be produced in the Champagne region, other notable European countries have relentlessly dipped into making sparkling wines. Spain produces a variety called cava. England also produces sparking wine. The country’s proximity to the sea allows the grapes to ripen during July. This allows the wine to achieve the perfect levels of sugar and acidity, which ultimately create the bubbles. Expanding the boundaries of areas in which Champagne can be made from France to include vineyards in Great Britain is something the French government is entertaining. As of this writing, a final disposition has not been issued.

For many, uncorking a bottle of Champagne is the quintessential form of saying “congratulations.” All over the world, Champagne is shared at major events. New Year’s Eve is probably the most notable and televised, but do you wonder why the hype given to the price tag and affluent consumer? Champagne’s high price comes from its region, the cost of production and the time it takes to make. As a result, it’s developed a reputation as a wine enjoyed by the classy and chic.That’s no surprise if you consider that a regular bottle of Dom Pérignon can cost you $170. A vintage DP Rosé costs as much as $400, and auction houses such as Sotheby sometimes sell bottles for $21,000. Hip-hop culture has also heightened the aura of popping bottles through celebrities like Sean “P. Diddy” Combs and Jay Z. Both frequently mention world-famous Champagne houses in their lyrics and make it sound extremely accessible. Obviously, much of the buzz behind drinking Champagne is the image it portrays and how much marketing executives feel the market can bear. Of the celebratory events where Champagne is a must, NASCAR is known for its “Champagne moment” at the end of the race, where bottles are poured over the winner. It’s all about the victory, and what better way to enjoy the moment than by sharing Champagne? 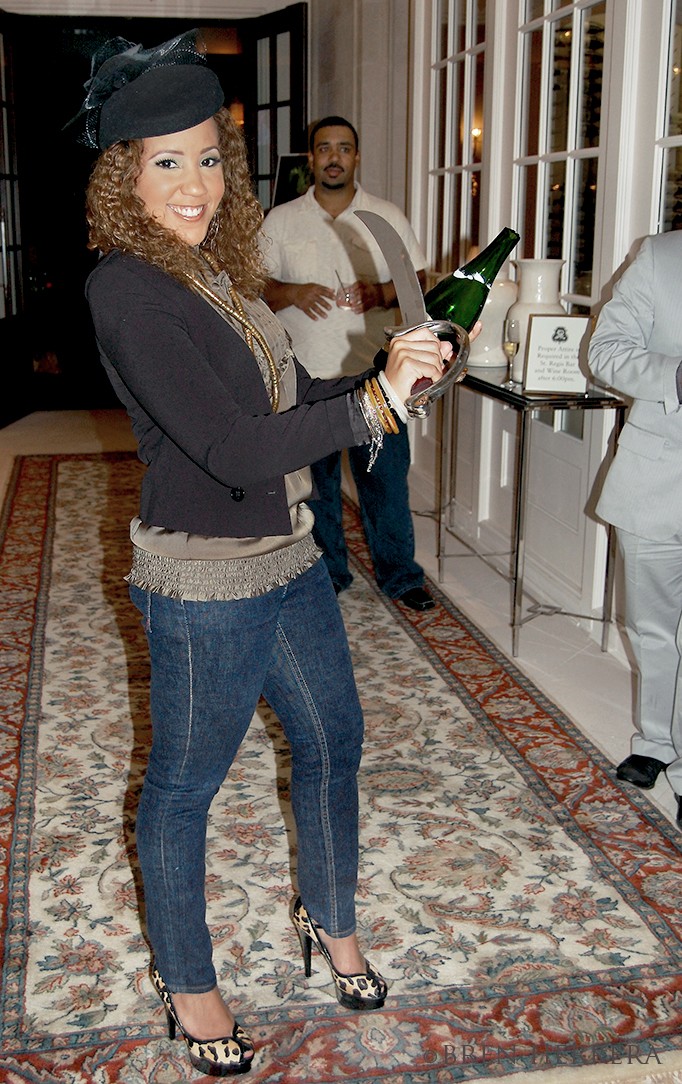 (Moi, learning how to saber a bottle during one of my birthday bashes!)

The most expensive bottle of Champagne will break your bank — but it’ll also add to your art collection! According to Los Angeles Times writer Patrick Comiskey, a 1907 Heidsieck bottle sells for $275.000. The exclusive bottles were intended for the imperial family of Russia, but a shipwreck prevented them from reaching their intended owners. Found in 1997, they’re now being sold at Ritz-Carlton hotels in Moscow. The mystery behind the lost ship and the length of time being lost single-handedly added to the hefty and unprecedented price tag!

In addition to the monetary cost, the mystery behind the loud pop and the bubbles’ ability to remain fizzy make for good sidebar conversation at these bottle-popping events. Of course, the pressure released once the cork is removed from the bottle is the cause of the loud pop. But now that the bottle is open, how long will the wine stay bubbly? A Stanford University study shows that leaving a bottle untreated will leave you with more bubbles after 26 hours than one with alternate methods of preservation [source: Zare]. The myth that a silver spoon will preserve the fizz has been scientifically dispelled.

** Make sure to read my new magazine B! Inspired, a lifestyle magazine for the person looking to live the best life! Our preview/soft launch issue now online and available for download.