I Love Beans. All Kind of Beans. But Then There Are Rancho Gordo Beans & Don 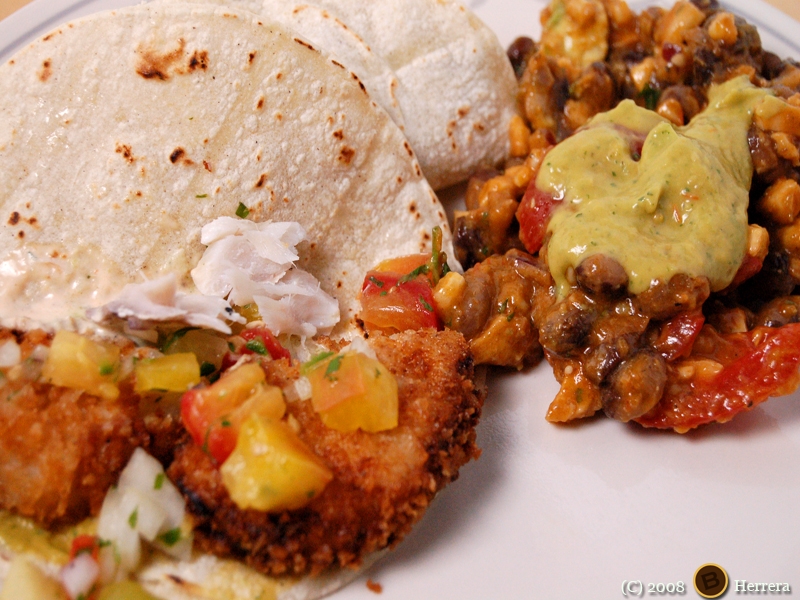 This is a long post, but very deserving, so sit back, relax and develop an appetite. Go chew some gum or something.

My friends usually look at me in genuine concern for my natural ability to consume bowls and plates of beans and never get gas stomach aches or bloat-y.

When your mother purees beans and you start eating them at the age of 18 months, your stomach can manage well.

And so I love beans. Black beans, chick peas, split green peas (WHOA), kidney beans, white beans. BEANS. And for most of my life, all I’ve had are GOYA brand. I mean, what else do you expect?

And even though I’m not Mexican, somehow, most Americans I’ve met make the sad mistake of assuming all Latin people are Mexican. I understand we all eat beans, but there exists distinguishing variables that make me Cuban and Ben (over at What’s Cooking) Mexican. And so, when such generalizations are made, and when a dinner invitation ensues a likable encounter, Mexican food is offered. In their home.

Such was the case last weekend. One of my very first readers is Don over at Mr. Orph’s Kitchen. After months of comments and emails, we finally decided to meet in person. It wasn’t easy coordinating. I missed the first two attempts due to scheduling conflicts. That didn’t fare so well with his wife. Sorry.

But I knew there was room for redemption. We’ve had great email conversations and he’s super faithful in reading my blog. I asked Don what he had in mind for dinner on Saturday. His response: “you’re picky so I’m trying to figure it out now”. Well not really. I just don’t do swine. Or shellfish. I offered to bring a flan and also make one for his wife. She has a sweet-tooth to talk about.

You know the blogosphere is a weird yet fascinating place. I’ve met some great foodies, some of which I consider to be friends. I had been looking forward to meeting Don for months now. He talked about food like I’ve never heard come out of a man’s mouth (a non-chef that is). That intrigued me. But, I didn’t know what to expect from this pre-medidated tryst. I’ve seen his recipes, liked most of them. He knows which ones I don’t care for (nothing personal). I enjoy his writing and recounts of his days in Philly. I like his candidness. And he had offered to burn me a copy of the “Emeril Green” show, so I knew that on generosity, Don was okay and not some crazy internet freak that wanted to broil me into little pieces of chicharon.

Oh, and a hug from Don. How sweet.

We sat and got the formalities out of the way for about an hour before we got really comfortable. I have the gift of gab, and I probably talked his ear off for the first 30 minutes. But Don is spoiled, I quickly learned. He needs all of my attention, so the slightest deviation away from his adorable face and he was tapping his foot. Even his wife warned me.

At this point I needed to quench my thirst and my energy. I beckoned him for some sangria he made at my suggestion. I gave him the recipe and instructions over email. It was almost perfect, Don. For my taste, it needed to be sweeter and have grapes. Peeled grapes are good for sangria because they really absorb the alcohol. It was still such a pretty drink, full of color and smoothness. 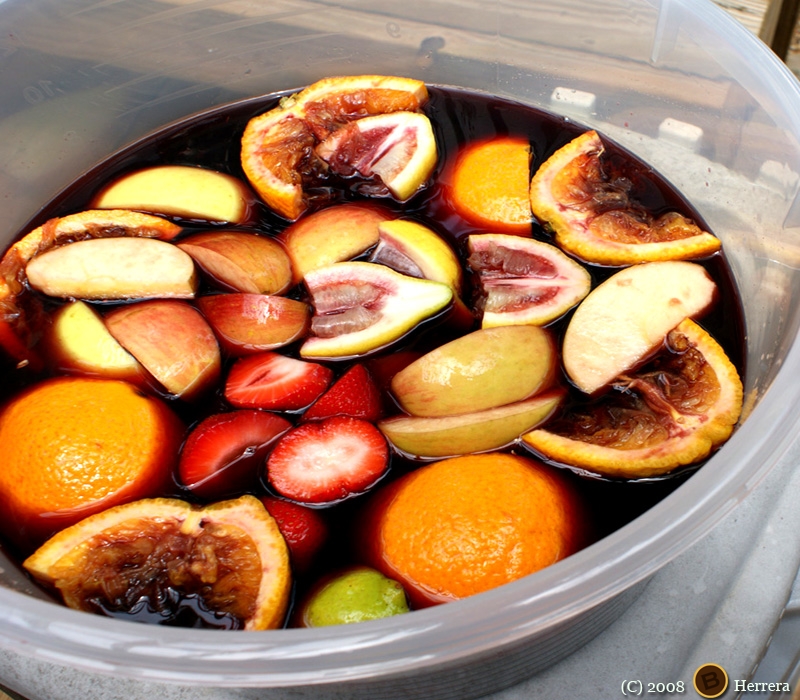 One glass of sangria for me and two for him and it was ON! We continued to sit & sip, but this time we started talking smack! Baseball, politics, taxes, TV stars, cooking methods, boyfriends, my blog, his blog, my aversion to pork and his infatuation with it, etc… I was hungry as all get out and the strong sangria started getting to me, I hate to admit, so when his wife Becky suggested we shut our traps and start cooking, I was happy.

This is when it gets really good. I think Don will agree. I know he’s reading. I enter his warm and fully stocked kitchen and he pulls out the prettiest panko crusted Pollock I’ve ever seen. We’re eating fish tacos! With 4 different salsas! YUP, 4! Don made 4 salsas, all from scratch. And a bean and avocado salad.

We had to fry the fish of course, but before we could finish, I had my hands all in his mac-n-cheese. It was so cheesy and so flavorful that I had to have a 2nd plate. Understand how much I DON’T like mac-n-cheese. He scored major points with me. I even invited myself to make a plate to go.

Poor Don, before he finishes frying the fish, I’m all in the drip pan eating chunks of pollock. A fish I’ve never had before, this white and very fishy fish was succulent and full of flavor. Very little seasoning required, especially if you’re wrapping it in something else.

And then there were the sauces. Don took them out and I just stared as if he had just opened a box full of Jimmy Choos, Guccis’s and Christian Dior shoes and said “Here Bren, I like you so much I thought you’d like this”! Wow. These salsas were beauties. And aromatic. I’m not just saying this because I was trying to be nice. I stuck a fork in each one and gave them a test. They were really good, for a Philly born and raised fella that played ball; especially the guac and tomatillo. And the bean salad, what can I say. Pure goodness. He alerted me and told me they were Rancho Gordo beans, a brand I know of but never had. You know, I’m Latin so I must stereotypically succumb to GOYA. These however, are a great competitor. I would even dare say better. But that remains to be seen until I’m able to cook them in my pressure cooker.

He was so kind and gave me a nice bag of RG beans. And because I was snooping in his cupboards, I found a sweet stash of salts. He had no choice but to give me black sea salt from Hawaii!

I moved on to making a strawberry flan for his wife. Not being in my own kitchen, I made myself at home and found two really pretty All-Clad pots, perfect for dividing the mixture. In retrospect, I probably would have pureed the ‘berries, but I know she really likes them, so I sliced them very thinly and just mixed them in. Because they take 90 minutes in a traditional bain marie and an additional 10 hours or so for chilling, I didn’t get to taste it, but I heard it was great. 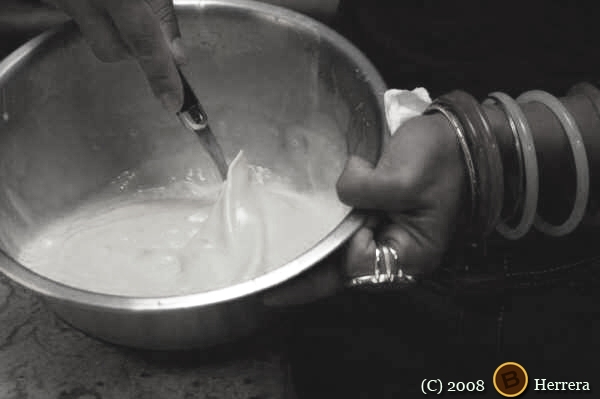 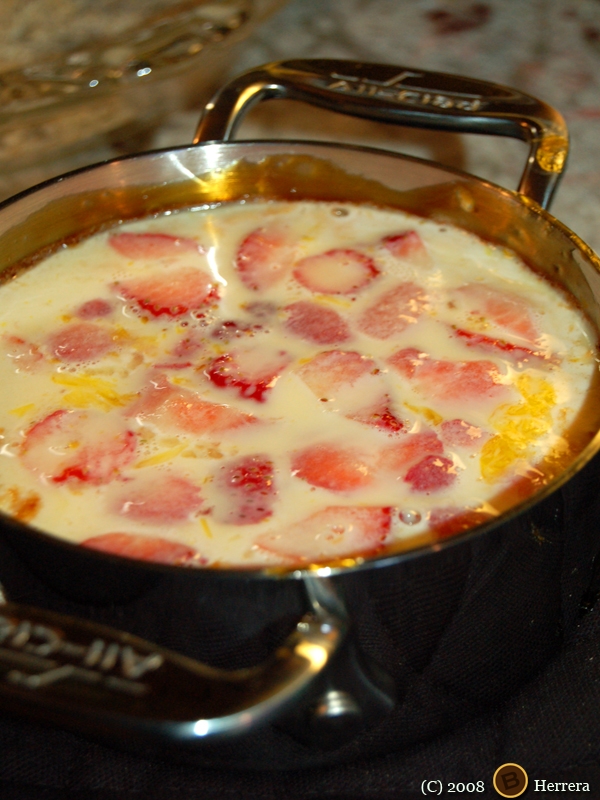 Smack talking continued, I’m pouring my heart out about a certain guy, and sangria was now dripping off Don’s hands so we had to get things under control and finish up. We finally serve it all up. 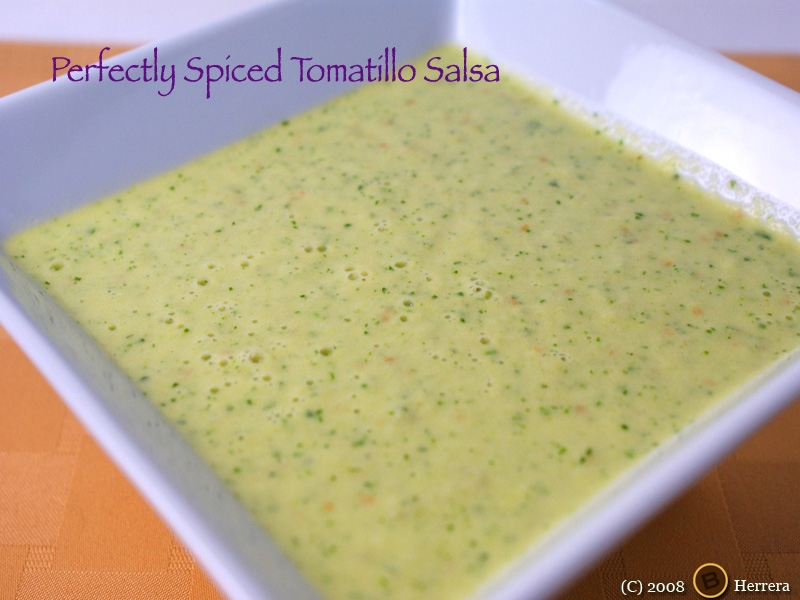 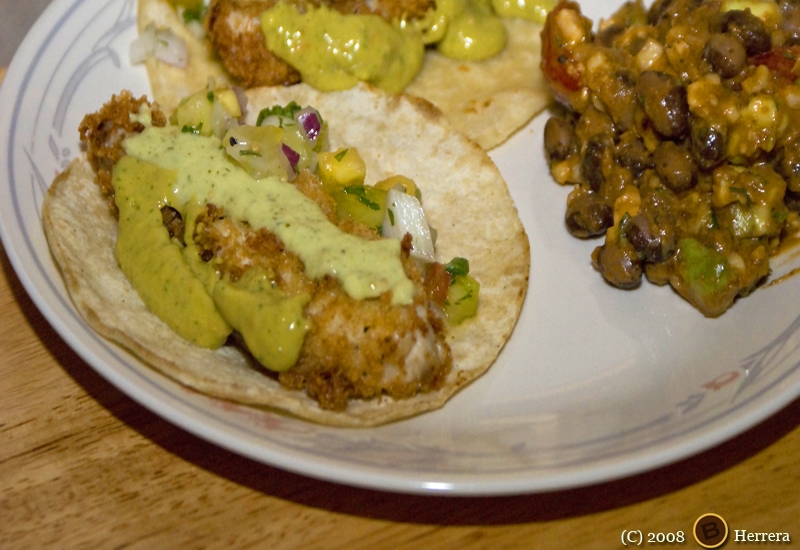 I had three banging tacos, lacing them with all 4 sauces, two servings of bean salad and one more glass of sangria. This girl here was content, having satisfied an appetite.

After dinner, I finally kicked off my 5″ shoes (yes, I had them on the entire time). Don, having a rich background full of stories from his ‘hood and interests that would entertain any woman of any age, indulged me. Not in the way a fine single man would, but close to it. He’s got this crazy collection of music, something like 10,000 records. He broke out his heads (earphones for those of that don’t know) and took me to the club! I sang along and danced like a giddy college girl to Beyonce, Prince and the Pretenders.

After 8 hours, I had made a great new friend. Don had fully entertained me. Great convo, constructive criticisms, good a** food, and beans to take home.

He even sat back and listened as I sang along to my favorite song: “Ain’t No Sunshine”. What more could a girl ask for!

Now that’s my kind of man.

Check Don out folks. You’ll be so glad you did. All the recipes of the food pictured is on his post today! I’m excited to consider him my new friend, in and out of the vortex world of food! So much so, we’ll be doing this again– TONIGHT!

In a bowl, combine eggs, condensed & whole milk, espresso & extract and whisk for about 2 minutes. Set aside. Rinse and thoroughly pat dry strawberries. Add to custard mixture. Add sugar to the flan pan and bring to medium-high heat. Allow all of sugar to reduce down until golden caramel, without burning. Do not allow the color of the sugar to become too dark. When fully melted down, carefully coat the entire sides of the flan pan with the caramelized sugar (I suggest using a brush if you are not experienced in handling extremely hot caramel). Add mixture to flan pan.

If you have a traditional pan that does not have a lid, cover with aluminum foil. If using a more updated version, cover lid and shut tight. Add 2 cups of water to large saucepan and gently place flan pan into Maria bath. Bring to boil for 60-90 minutes or until fully cooked. If firm, bring heat to low and let simmer for 5 minutes. Remove flan pan from Maria bath and discard excess water from saucepan.

Do not remove flan from pan. Refrigerate for 8-9 hours,  4-5 hours (if you’re in a hurry); or overnight for best taste. Remove from refrigeration 30-45 minutes before serving to loosen some. To serve, using a butter knife, loosen the sides of the flan all the way around. Take a large plate, place upside down on top of flan and flip! Be careful not to waste any of the caramel sauce. Serves 8-10. Enjoy thoroughly!

CHEESE GIVE-AWAY FOR THE LUCKY

29 thoughts on “I Love Beans. All Kind of Beans. But Then There Are Rancho Gordo Beans & Don”