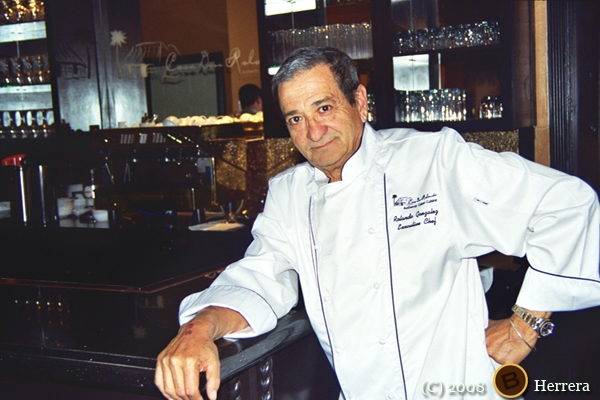 What a crazy week I’ve had. I could have stuck a needle in my arm to numb the stress. Wouldn’t it be cool to do that and sweetness come out? Like chocolate almond ice cream?Okay, that was nasty. Sorry. But it’s all I could think of that would make the amount of work be manageable.

I’m off to St. Maarten today so I’ll be relaxin’ for the most part. (will write next week)

No matter how much work, I’m thankful for all of it. The latest was establishing a small degree of separation between myself and Jennifer Lopez! I dream (literally, during REM), that I’m friends with A-listers. From Usher, to Tiger Woods more recently (we drooled over each other in a country club house) to Jessica Simpson. It’s really weird, I know, but I wonder if it’s the celebrity gods calling me to join the real estate in Tinseltown.

Though I’d much rather be in Manhattan.

When I was approached to review the French Bistro and Brasserie cookbook for Atlanta’s Finest Magazine, I was also introduced to J. Lo’s personal Chef, Rolando Gonzalez. He’s Cuban. Just opened up Casa Don Rolando, a traditional Cuban restaurant in LA ,and he’s friends with the Diva.

I had a great phone conversation with the man that cooked for Lopez’s intimate wedding to Marc Anthony. Chef Gonzalez doesn’t tell all, but what he does share was pretty fun to know. 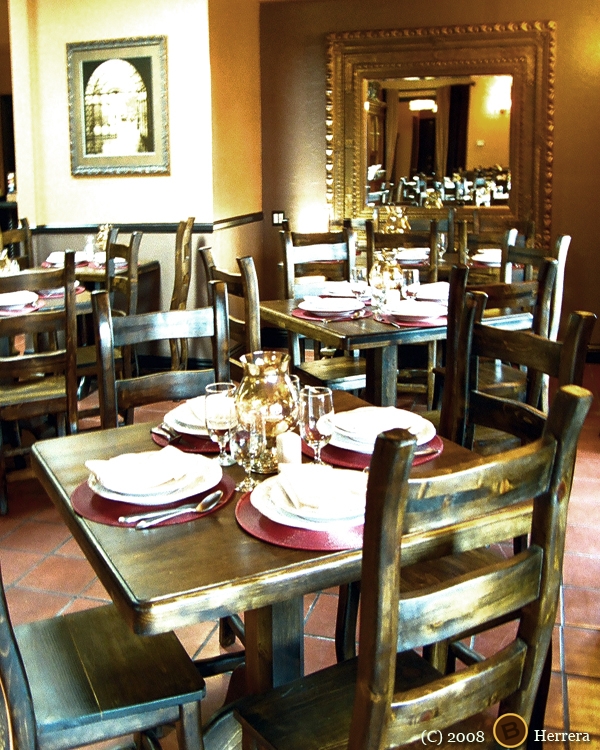 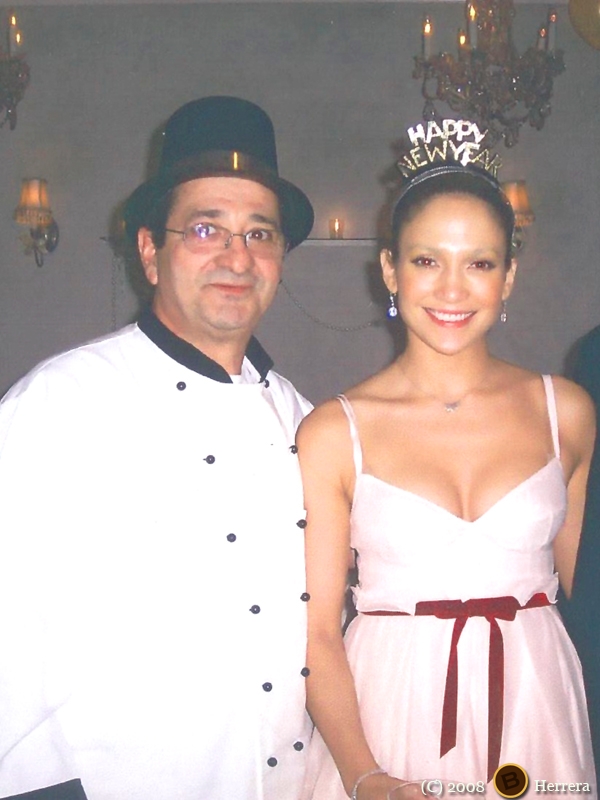 (Interview was done in Spanish. I’ve translated it here):

Bren: What was the concept for Casa Don Rolando? And when did you open it?

Chef Gonzalez: I left Madres in March to open my own restaurant. So it’s been only 3 months! I wanted to replicate the feel of Cuba that I remember. I wanted to have a relaxed, non-gourmet place where the most important element was the food. I wanted to offer traditional Cuban food, while feeling close to home. I have wood tables, landscape pictures of the island and other things that will take patrons there.

Bren: Do you have an area for playing dominoes? You know that’s our thing!?

Gonzalez: I do have a patio with tables set up ready to go. I’m just waiting on my full liquor license to be able to serve up tragos [cocktails]. You know so people can come by on Sunday morning and have their cafesito [espresso shots], pasteles [pastries] and a good game.

Bren: How did you get to LA? Or why not Miami or NY?

Gonzalez: Family. I left Havana in 1989 and went to Spain. That’s where I got my start in food. I worked at a restaurant as a dishwasher and worked my way up. It was a way to make a living. My wife’s family was in LA so we went there. I like Miami, but just to visit.

Bren: I feel you! So where did you study Culinary Arts?

Gonzalez: Auto design! I’m an economist by degree. But when I got to Spain, restaurants were the easiest jobs to land. Like I said, I started washing dishes. I was offered a position as a cook when the owner where I was working, tasted my “arroz con pollo” . It was such a hit. My brother and I then opened up a restaurant in Mexico. I then met Jennifer in LA and that really kicked off the bigness of my business.

Bren: What are the most important principles a young Chef must have to really make it and be successful in this profession?

Gonzalez: Passion and respect. It’s not an easy job. While others are enjoying themselves, you’re working hard in the kitchen. You have to love what you do otherwise you’re business will be affected.

Bren: What do you find most special about Cuban cuisine?

Gonzalez: I respect the original recipes. My kitchen is 100% casera [home cooking]. The way and tradition of cooking Cuban food is not fusion or to mix other cuisines with it. For instance, there’s a wave of mixing Chinese food with Cuban because of the existing Chinese population in Cuba. My rabo ensendido (oxtail) is rabo ensendido. Arroz con pollo is arroz con pollo. Period. I cook what was being cooked 400 years ago in Cuba! Who am I to change it? My patrons like it that way.

Bren: With all due respect, I make a killer flan that has grand marnier and cuban espresso. And that is far from being our original recipe.

Gonzalez: It’s one thing to taste great, it’s another for you to eat it and you remember your grandmother. For instance, arroz con pollo–a lot of my patrons always tell me “man, that reminded me of my mother’s food”. That’s what I want. It’s special. Pineapple might be a good addition, but the response won’t be the same. Cubans are my biggest critics. It happened once at Madre’s. A young girl ate pork chops and said “wow, it feels like noche buena (New Year’s Eve)” I was proud.

Gonzalez: Mojo criollo is fundamental in my kitchen. Citrus mojo that is. And then Cumin. A lot of people don’t like cooking with cumin, but I do. Picadillo is not picadillo [Cuban style ground beef with lots of good things] w/out cumin. The same goes for Congri [Moors & Christians rice].

Bren: Okay let’s talk about J. Lo. How was being the Executive Chef at Madres?

Gonzalez: It was fun. High profile. But I wanted to own my own restaurant.

Bren: So my readers what to know some things about her. What kind of diet did she do to lose the baby weight so fast? She looks fabulous!

Gonzalez: Truthfully, Jennifer doesn’t diet. I’ve never known her to do a diet. We went on vacation once and she ate everything. She’s very disciplined about her eating. She really watches what she eats. And she exercises a lot. She has a great metabolism. That’s how she keeps that body!

Bren: So what’s her favorite food:

Bren: I understand you cooked for her wedding to Marc Anthony. What did the menu look like?

Gonzalez: She gave me license to do what I wanted. She wanted seafood, pork chops and ropa vieja. I made a lobster civiche, red beans, roasted pork ribs, plantains, carne ripiada [a different word for pulled flank steak] and a few other things. And dessert was flan and dulce de leche.

Bren: Another reader wants to know what you think has influenced her professionally and personally as it relates to her Cuban interests in that she chose you to be her Chef, a Cuban man and not Puerto Rican.

Gonzalez: I think her first marriage had to do with it. She was married to a a Cuban guy. She started making more Latin and more Cuban friends at that point. So she was around the culture much more. Jennifer is a very American girl. She started indulging in the Latin culture just recently, in the last 8-9 years. She didn’t start learning Spanish until she was 30.

Bren: Has she been to your new restaurant?

Gonzalez: No, she lives in Long Island and since she’s just recently had the babies, she’s not had real time. But, she will!

Bren: I just came up with a Cuban style sushi roll and a local restaurant is going to add it to their menu!

Gonzalez: Oye chica, send me the recipe and I’ll try it out!

At the end of the interview, Chef Gonzalez invited me to come to LA and do some cooking with him. I have other things in mind, but I’ll let them simmer in my head first. I’m planning on those big things he first spoke of!

For those of you in LA or surrounding cities, stop by and visit Casa Don Rolando. I’m obviously not eaten there but I will guarantee a great experience eating traditional Cuban food, from an authentic native that loves what he does! I know it.

Oh, and tell him I sent you. Maybe he’ll introduce me to Jenny! 🙂

He was kind enough to share his own flan recipe. I’ll make it when I get back and let you know how it went for me. If you make it, please let me know what you think! Below is his recipe.

Preheat oven to 350 degrees. Caramelize the mold- Put about 1 cup of sugar in saucepan. Turn the pan gently until the sugar turns amber colored. Pour caramel into the mold spreading it evenly over the sides and bottom by tipping the mold. Beat eggs and egg yolks. Add milk and 3/4 cup of sugar. Add salt, vanilla, cinnamon and lime rind. Pour into mold, cover with foil paper and place mold in a larger pan and fill larger pan with enough hot water to cover half way up the mold. Bake 1 1/4 hours. Remove mold from hot water and cool. Refrigerate. When ready to serve turn the flan over onto a plate, slice it, and spoon the caramel over the flan.