Don’t you want this right now! Stare at this martini long enough, and you will be making one before you go to bed tonight.

One of the best things about the classic show “Cheers,” was the theme song. You really don’t think it will apply to your social life, until you find yourself frequenting a restaurant and bar, and staff knows your name. It’s even better when the owners have donned you a nickname.

Now, I’m not big on sitting at bars, lending my credit card open, listening to less than sober men spit about who won what game, or how their boss is sleeping with his receptionist; but there’s this bbq joint less than 1/2 mile away that I grace at least once a week. It’s pure comedic relief, observing the diversity of characters.

Plus, every one really does my name. They call me “Bee”.

The pork is not what keeps me going back. You know I don’t do swine. Not even their succulent beef brisket makes we want to go back. Their cheese biscuits are the best I’ve ever had, no lie. I’ve begged for the recipe, but they won’t break. Fine. Since I’m on a no-bread diet for the next 2 months, those mouth melting buns don’t do it, either.

But Daniel! Daniel is reason enough for me to sit at the bar and bear the vulgar approaches of inebriated men. Anything I want, Daniel makes. And, always has a sweet, flirtatious, boy-likes-girl, smile on his face. About 8 months ago, while feeling that cocktails are wasted calories, and really trying to go back to when I was 25, never having had a drink, ever, he broke me. Ever so nicely, he offered to buy me a drink; asked what I wanted. Still trying to hold back, I declined.

He continued to walk back and forth, satisfying others’ orders, when I decided to plunge. “Daniel, make something specifically for me. Something you’ve not done before.” 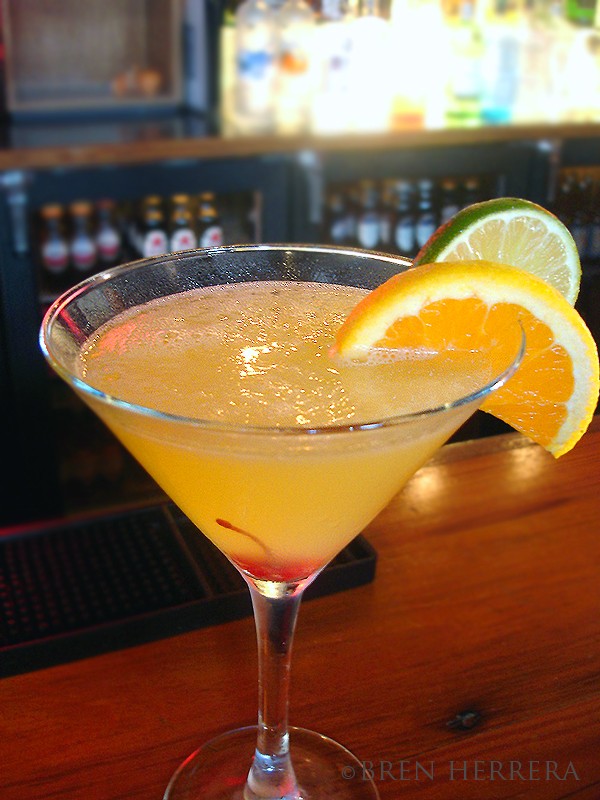 What I share here with you is a work of 8 months. Sheena, the ultra aggressive, bar none, tongue lashing bartendress (whom I’ve witnessed kick people out), can’t even get it right. It’s good, but not Daniel’s. I’ve taken it to other bars, and they can’t get it right, either.

I’ve made this martini it at home and I’ll say I’m at 95% on top of it. I haven’t quite figured out what Daniel does when I’m not looking, or what he’s omitting to disclose, but who cares!

This *ish here is 2nd best to a mojito! Yes, it’s that damn good! I order it for lunch and have it for dessert. And, since it’s Sunday, I’m getting ready to make one now, before I even finish the post. It’s the ultra luscious martini, perfect for summer soirees, for treating yourself like a Queen Bee!

I was going include the name of the bbq joint for you Atliens, but as his request, he’s asked I not. He’s in the final stages of opening up his own joint, and wants his customers to know it’s his drink, and not the restaurants. So, I abide.

But, if you want to have Daniel tend to your next fete, I recommend him as a master mixologist. Find him here.

I’m happy to introduce the very first cocktail to be made and named exclusively for me! I’ve raved so much about it, it’s now a popular sip at the bar. I invite you to make it, but you must call it the “KISS Bee“, (which is what sweet Daniel named it). It’s the ONLY way it’ll taste the way Daniel makes it. But, a caveat. You must try this at home, and tell me what you think the measurements are. I won’t share here, only cause I’m so curious what you think about it!

Following are the ingredients. In the meantime, take a nice, whet siiiiippp!

** Subscribe to Flanboyant Eats and be part of the sexy group to get 1st dibs on give-aways, unpublished recipes, sneak peaks @ chef interviews and other giddy stuff! Weekly newsletter is rolling out in later this month! Join now!**

Don’t forget that July 1st means the beginning of LOTS of new and exciting projects. I’m particularly interested in your help in the HELP ME FIGHT HUNGER campaign. Read more about it here. Thanks!

Add all ingredients to a martini shaker. Shake well. Pour  into a chilled martini glass. Garnish with orange and lemon or lime wedges. Top with cherry.