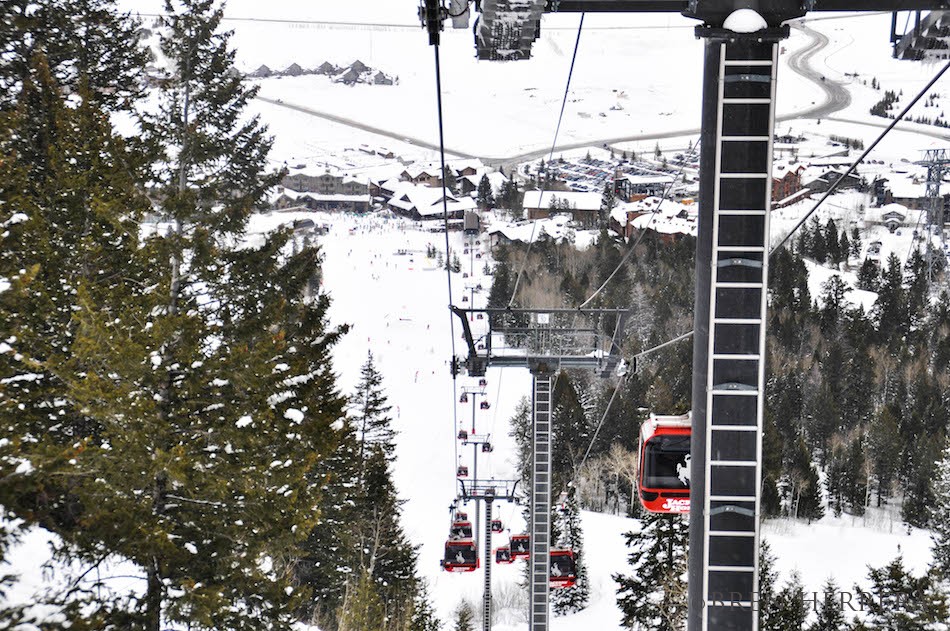 I had heard of this place out west where the cowboys still walk the streets and the moose mingle with the locals.  That small western town is dwarfed by the mountain range known as the Tetons.  Oh the Tetons.  Backdrop to many movies and TV shows and home to some of the biggest names in snowboarding including Travis Rice, Bryan Iguchi and Jeremy Jones, to name a few.  I’d seen all these epic snowboard movies that had these amazing backcountry lines with cliff jumps and Alaska like chutes.  I HAD TO GO.  I’ve been snowboarding for about 17 years now and have been to just about all the well-known resorts in the country, from Vail to Park City.  Jackson Hole was my next stop.  Last February, my two sisters and I were in the air on the way to this winter wonderland.

Arriving in Jackson and seeing the Tetons from the air put everything in perspective for me; these mountains are humongous.  Giants.  Behemoths.   No foothills obscuring the view.  The massive 13,775-foot peak of the Tetons are there and very real.  It was kind of late in the day when we arrived in the proper town of Jackson Hole, which is home to a smaller much older mountain called Snow King Mountain Resort, where we stayed for the week.  The resort is small in appearance, but houses everything you need. Fancy restaurants, great views, comfortable accommodations, and, their own mountain, of course. 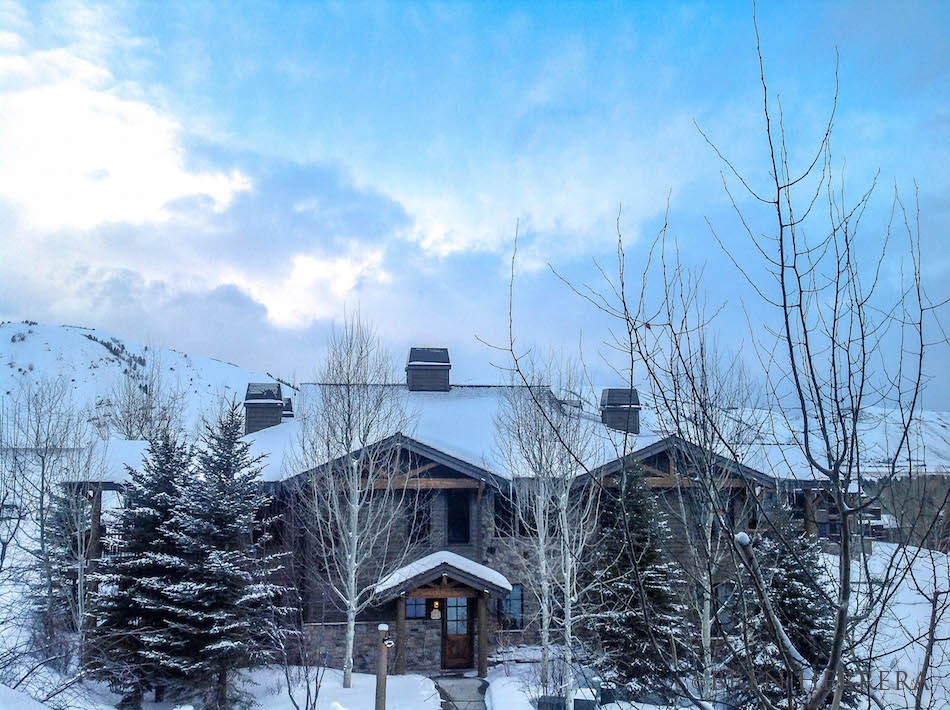 Needing to scratch my itch, I immediately unpacked my board, changed into my riding clothes, and dashed out the door in no less than 15 minutes, ready to shred.  The mountain was calling.

It had been less than an hour from landing and I was already on the chair lift giddy like a kid in a toy store. 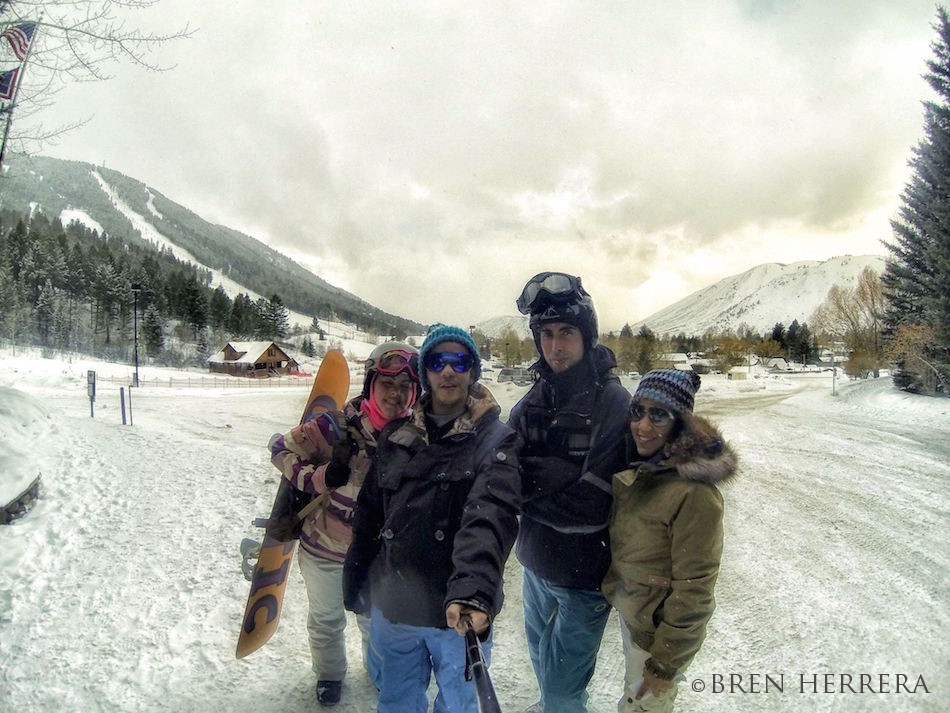 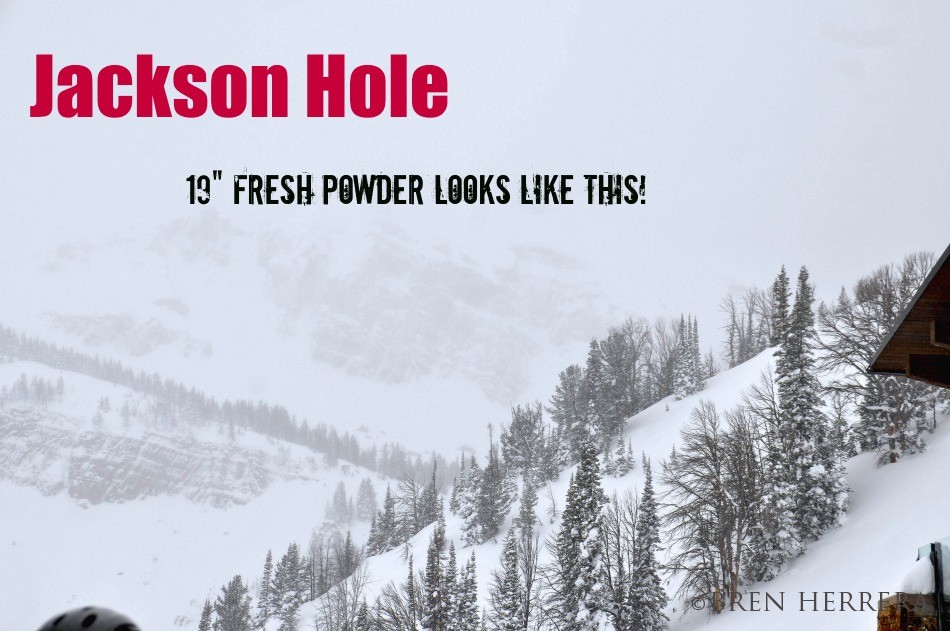 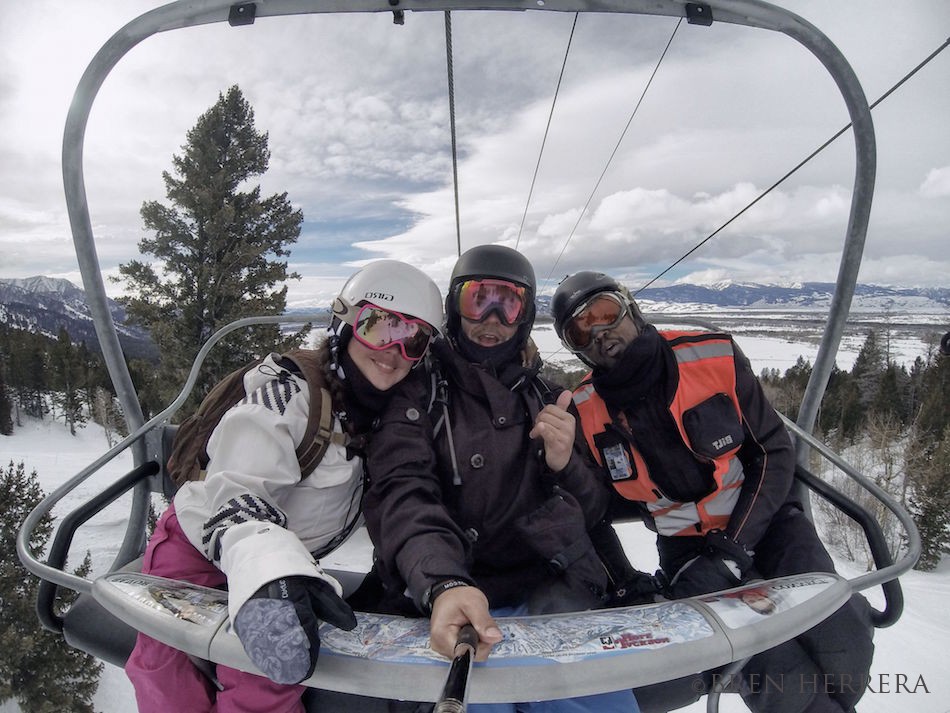 It was snowing as we pulled up to the mountain which was a great indictor that the conditions were going to be way better than anything I had ridden that season.  Coming from the “Ice Coast” I was happy to ride REAL snow and have that floating feel of what snowboarding should be.

Before I could descend the mountain, which was quite surreal, mostly because fresh snow was piling and visibility was poor, I wanted to take it all in. Half of us took a lift all the way up first. I got to the top of the mountain and just stood there, marveling at the scenery. Enjoying the serene nature and beauty of the raw town of Jackson Hole set the tone for the day… and the rest of the trip.

After soaking that in, I quickly scurried back to trails and smiled all the way down with my GoPro and selfie stick.  Carving in and out of trees, ducking under branches and dodging stumps was every bit of exhilarating.  I played out this scenario over and over again until my body wouldn’t let me go on.

I went to bed that night with immense satisfaction but needed to get rested for the intense days ahead. 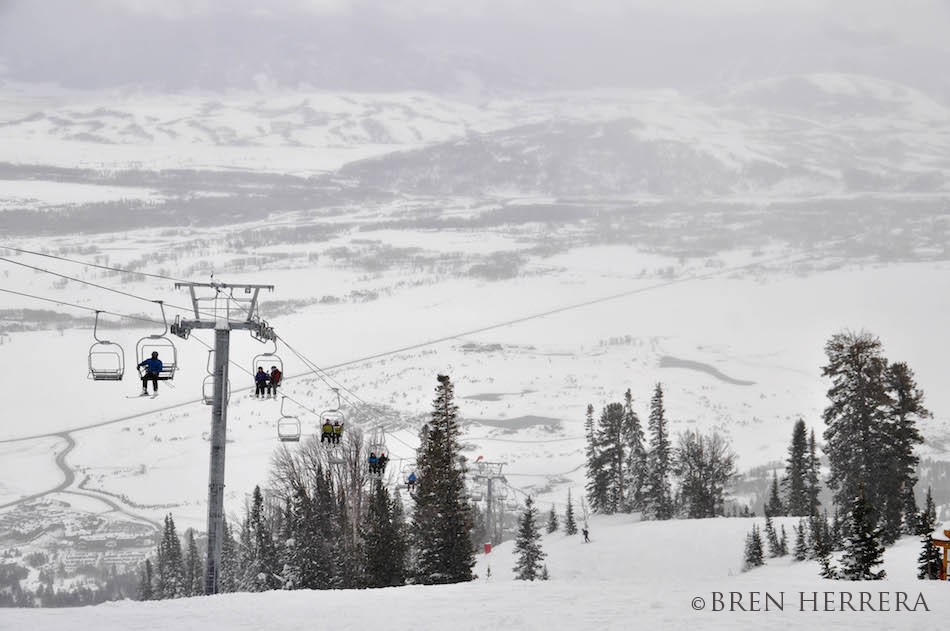 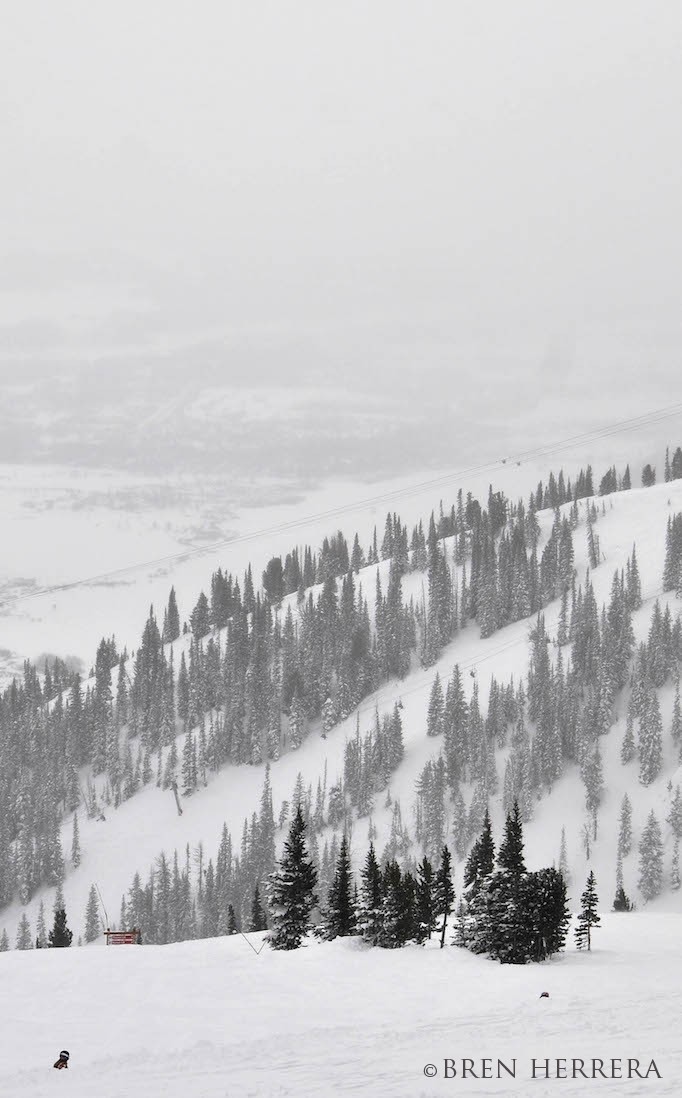 It had already been the second snowiest February on record, so I knew I was in for a treat.  February 23rd enjoyed 19” of fresh snow overnight. You could sense the energy and excitement as soon as we arrived at the base. These skiers and boarders were ready. The snow gods had blessed us with these amazing conditions for our first trip to Jackson Hole.  We couldn’t ask for a better situation, especially for my sis, Bren, whom hadn’t touched a board in almost a decade. But, that could also be a problem for her (us!).

The tram line was probably the longest it had been since Top Of The World Waffles opened with at least 500 people anxiously waiting to hit that powder.  I had no clue what waited for me at the top of the tram but I didn’t care.  No warm up runs, no stretching, I was in line, sucked in by the vibes in the air… I was doing this.  Talk about into the wild; the nine-minute tram ride was a ride to remember. The silence as everyone prepared mentally for what  was about to happen, was eerie. To add mystique, winds were topping at 50mph with loud howling, causing the cables to sway up and down.  This got real, real quick.  We arrived and what I saw was a complete white out.  Winds pushed all of us like tumbleweeds as we jumped out and made our way to prepare to drop in.  I strapped into my bindings, took a deep breath and within 2 seconds I’m gone like a ghost into Rendezvous bowl.  Not a care in the world, smiling cheek to cheek, I was in heaven. The was a wintry play land like none other. 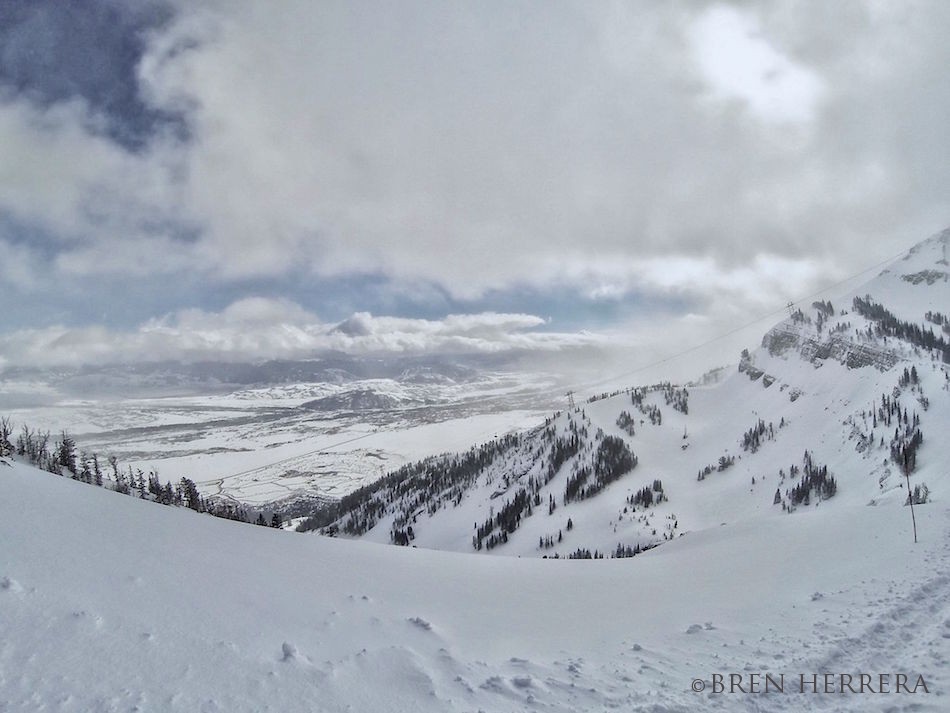 I couldn’t see a thing but I was making my way down with nothing but pure feeling, floating on all that powder.   That first run set the tone for what my next four days of riding would be.  Pure solitude; me against the mountain.  Big swooping powder turns; tree runs and hitting natural features in the stash parks throughout the resort, would consume me.  I knew I was going to have to come back to Jackson Hole every year from now on.  This was it.  This is what snowboarding is supposed to feel like.

Four days were good. But a solid seven would make up for the mediocre conditions I live with on the East. Jackson surpassed my expectations. It was well-designed, well-organized, and the proverbial icing was the spectacular panoramic views of the valley… sprinkled with clean snow.

Enjoy a short vid of one of my runs! It’s good, but so much better in person!

Read my sis’s article in Parade: 5 Reasons to Visit Jackson Hole. And, her blog post on a wild, wild west snowy safari!