My camera broke right before I took this picture above, hence the cartoonish effect I layered on the esteemed chef, Jacques Pépin. Eek! I was sitting front row during his live show at the Metro Cooking Show in DC and was taking lots of pics with my DSLR, iPhone and iPad… I stood up to approach the stage, snapped a quick one with the phone, and recessed back to my seat. And then….. and then the Nikon fell harder than a wood plank onto a concrete base and and just about split. I couldn’t even react because I was center stage and all eyes were fixed on him. I picked up my lens which had rolled to the next row and quietly shook my head.

But, I had gotten to the rest of the show — most of it anyway — before the disaster, and captured some of the good stuff exhibited. So yeah, I’ll get back to Pépin’s show in a moment. Attending these massive food shows are tricky for me. You’d think I’m a crowd person, but I’m not. Unless I’m on stage and the one doing the entertaining. Otherwise, walking among hundreds of people in a confined space puts me in a tizzy and I’m too overwhelmed. I’m almost like a kid whose lost Mami and trying to be cool about finding her. The saving grace here is that I’ve been a fan of this particular cooking show since it kicked off a few years ago. I’ve actually been dreaming of getting on board as a presenting chef. We’ll see. Perhaps next year. Till that happens, I’ll attend and meander through the growing number of aisles occupied by vendors, most of which seem to return.

I missed Saturday which kind of sucks since Giada was doing her thing. Haven’t heard any reviews, though I’m sure she didn’t disappoint. Just ask a guy! So, yesterday’s slate consisted of more of the same live demo’s by local chefs, tastings by local caterer’s, vendors, jelly makers, confectioners and designers. The nice mix of local, regional and national foodies offered a colorful array of options to snatch up.

Of the 20 or so tastings I indulged in, my two favorites had to be in the sweet space.  One was chocolates from a local gal that embraces the spirit of the city. Showing a bi-partisan hope, she had Donkey and Elephant dark chocolates. Guess which one was sold out? The other one was a fine French bakery located in Bethesda, MD which features mousse cakes. Oh my word! Those girls (father is the pastry chef and wasn’t present) were dishing out little cubes of six different types of cake. I don’t have a picture of those because I came across them on the way out and you know where the camera was. A timely tasting has been scheduled so I’ll be back with more information and teasing on them. 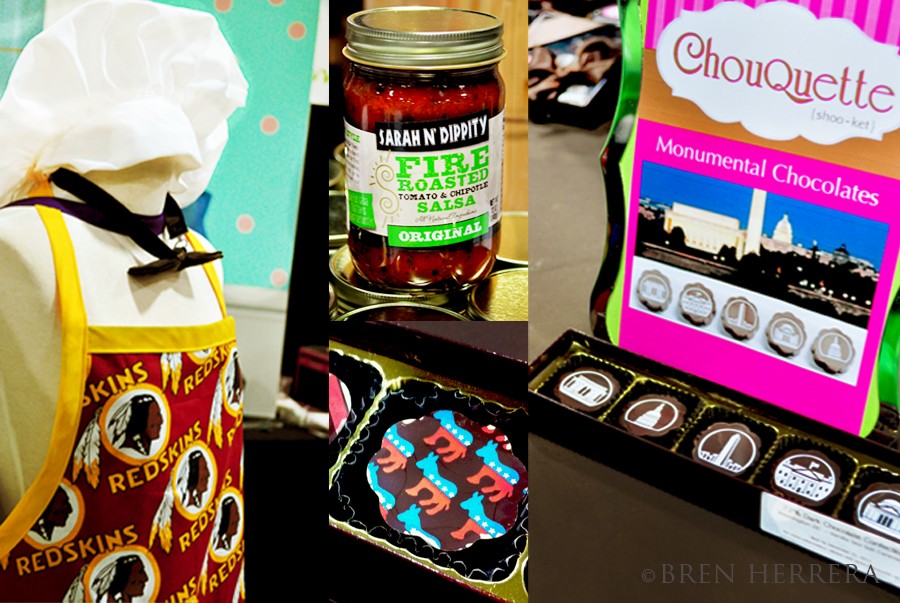 There were cheeky vendors like the author of the book below…. I was taken aback but chuckled. He looked at me as if I had just insulted him. I mean, I’m quite familiar and have offered up to cook for shoes, wine and travel. But S.E.__?? Wow. I guess you’d have to pick up the book to understand the connotation? I don’t know. 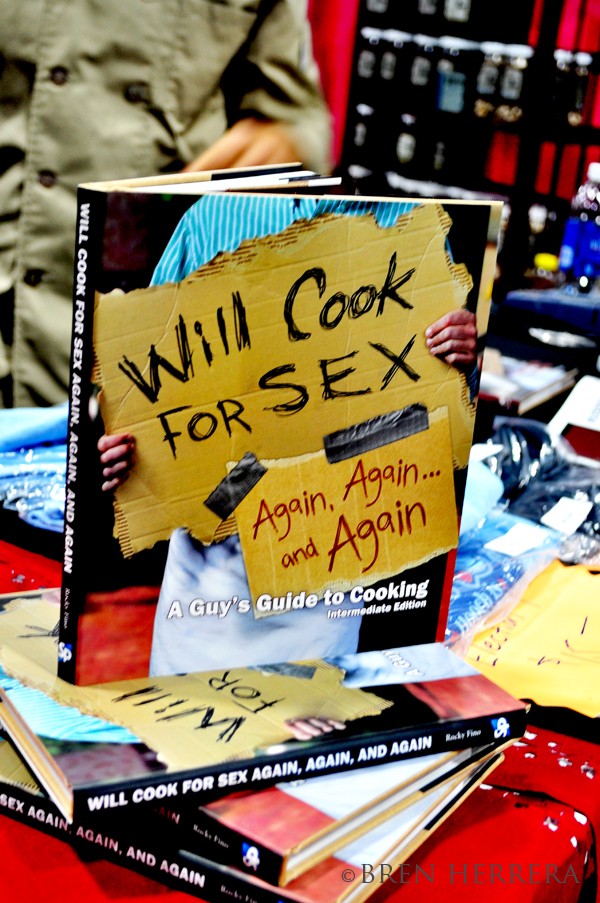 There was a wine and spirits showroom which I wasn’t allowed into with my media pass. Odd considering I was allowed in a few years ago with the same pass. Maybe the economy has something to do with it. Again, I don’t know. So much has changed about the show. But, one thing was consistent: the quality of vendors. Mostly really good and worth visiting. Some I’ve seen at other shows which is indicative of their well-doing and others were new to my experience. The local row was something new the organizers implemented to much success. Though the show tours in 3 cities, it’s nice to highlight the wonderful talent from the host city. It’s also a great way for locals to get to know what’s here. Like a most delicious cookie company down the street from my house. I’m working on a full-length cookie feature so I’ll reserve a review of their goodies for that. However, Cocova, a chocolate boutique in downtown enticed me to set up a tasting when I saw their lovely display of over   200 specialty chocolates from all around the world. 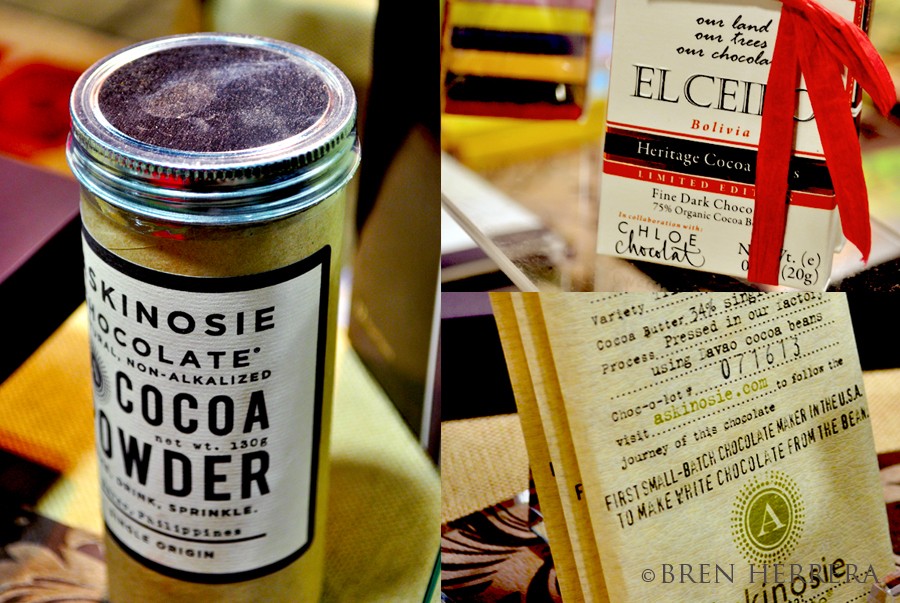 The quick walk through (tardy arrival and that sense of being “lost” in the hall) ended and I made my way to Pépin’s show. Okay. So this guy is one fantastically entertaining personality. I’ve honestly not tuned in to any of his new TV shows; the last time being when I was a little girl. Watching him, front row, was the perfect reintroduction to his renewed career and a fresh new look at his cooking.

Stirring it up next to his daughter, Claudine, who keeps everything moving and quite bossy, Pépin still has his thick French accent as he feins not to know what’s going on, but eloquently displays his immense skill at cooking so effortlessly. I’ve seen that quality in other superstar chefs. Emeril is one of them. Robuchon another. Pépin moves about the stage and mobile kitchen with ease as he answered questions from the crowd and talked about his friendship with Julia Child. He spoke of her as if she was sitting in the very back row, scoffing at his joke about her “ugly” thick voice and love affair with butter.

I’m not really sure what he was cooking other than the apple fritters, which one young girl was lucky enough to hop on stage at Claudine’s invitation, and prepare with him. He even said he wasn’t sure what he was making. But he still managed to finish it all with cohesiveness. The fritter batter was made with cold beer, which he sipped on as he mixed. That was one key take away and an element any chef will tell you: If you drink it, you must cook with with. If you can’t cook with it, you shouldn’t be drinking it. That’s the French way. And the Cuban way.

The demo itself wasn’t telling. But then again, none of them are. I’ve been to a lot and they’re all the same. Cooking you can’t see or taste and little talk about the process. It’s all a show and exhibit of their persona. People like it. You can’t attend one of these shoes expecting to know his secret to being a great home cook or stellar chef. I say listen to the questions posed by the audience. Those gave great insight into his approach to cooking. My major take aways, not having ever really engaged with his work other than this awesome interpretation of one of his Turkey & Mushroom Armagnac Sauce, were following:

1. A serious, 3+ star restaurant does not operate in chaos; hence no screaming, yelling, debauchery and the likes of Hell’s Kitchen. It’s made for TV that way. A serious kitchen environment is boring for TV. Claudine added that everything must smell good, be clean, orderly and respectul.

3. If on a budget, buy wine before anything else. You’ll drink enough that you won’t be hungry! Claudine suggests buying local, fresh (none of that packaged stuff) and whatever you’re going to enjoy most.

4. Les Oeufs Jeanette (or deviled eggs), named after his mother, is the best recipe he can recommend you make to impress someone. He details every step and convinces that they’re super easy to make.

5. His daughter and granddaughter are his favorite people to cook with. Nothing better than family to cook with

6. He comes from a long line of female cooks, chefs and restaurateurs. He dispels the notion that most French chefs are male.

8. Favorite wine: “Free!” Or ones under $15. Some French, American and South African! 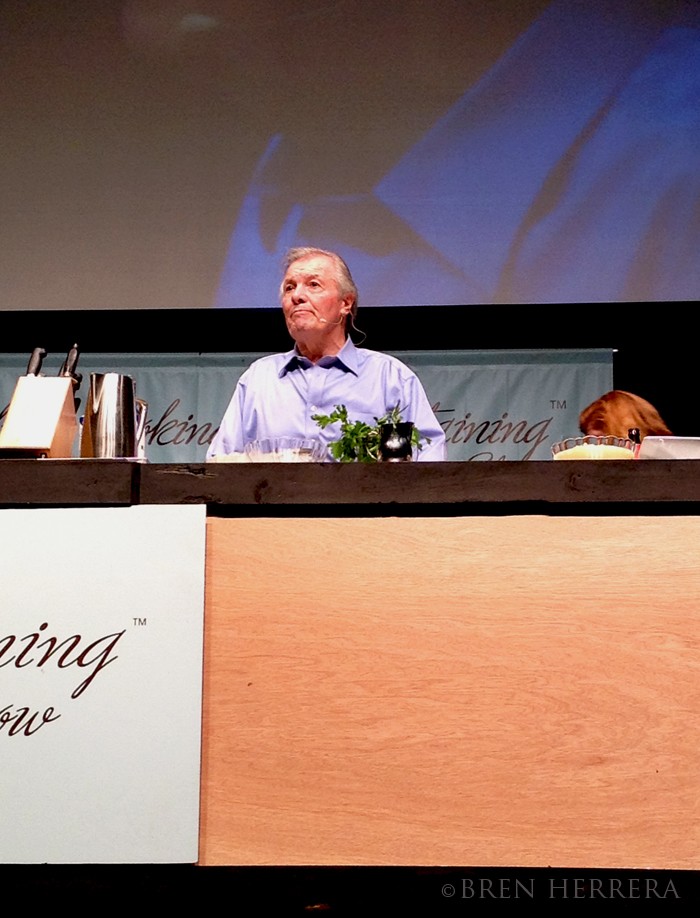 As with any fine chef of his caliber, Chef Pépin exudes confidence, sass, openness and willingness to share, humility and a character built to do the same thing, day in, day out. With a the right amount of humor. Even if a bit dirty. That’s passion and commitment.

He sped off to catch a train to NY but Claudine hung out a bit to answer additional questions. And lauded the young culinary students that volunteered. 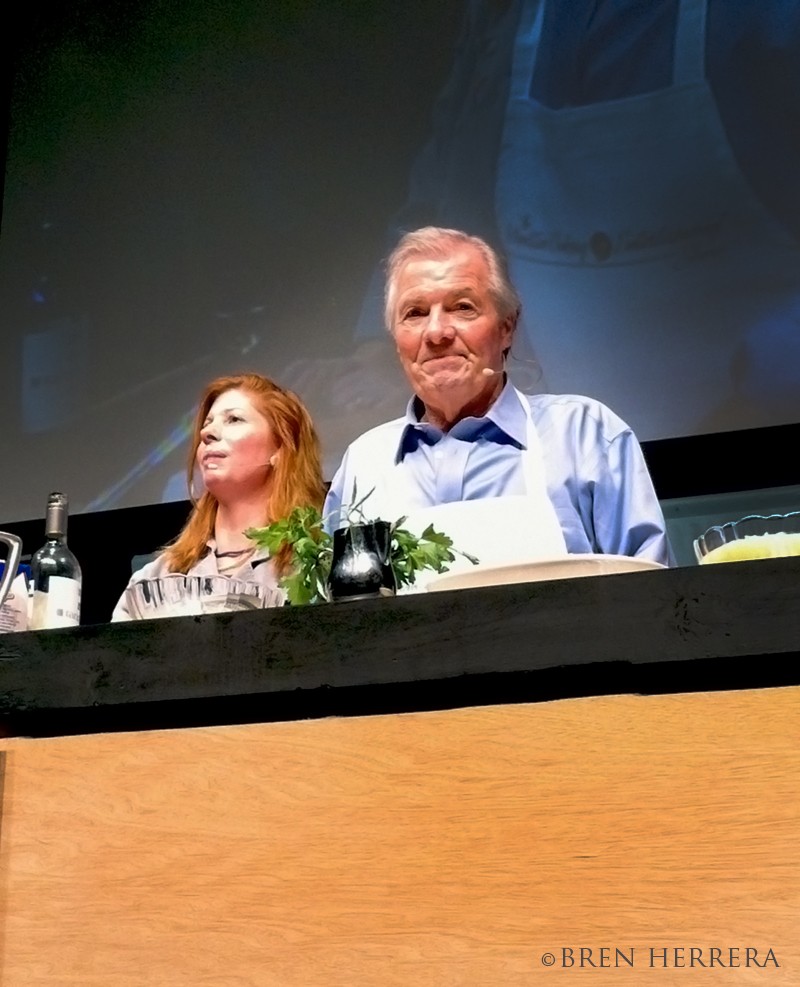 Check out my version of his Capon Mushroom Armagnac Sauce recipe… I made mine with leftover turkey from Thanksgiving! Divine.