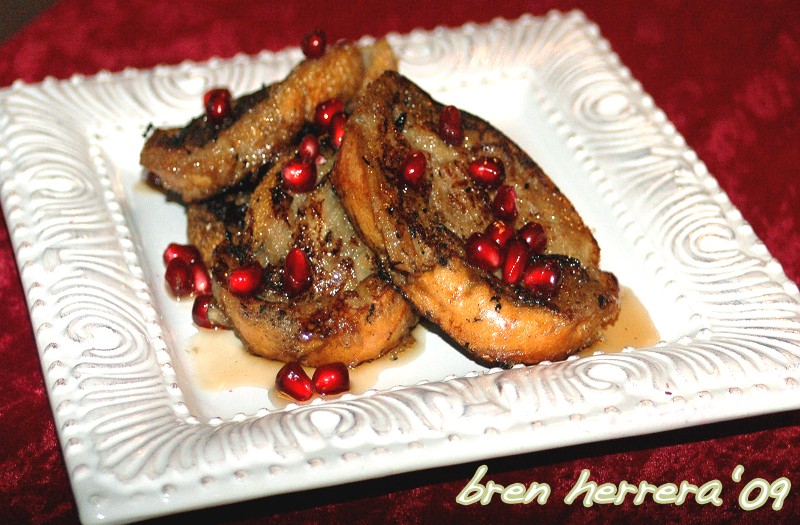 I imagine that yesterday was like every other Thanksgiving Day, filled with stress over having family over, not wanting to talk to certain family members cause they’re nosier that TMZ;  food not being finished on time, making multiple runs to the store, even within the last 15 minutes of their opening hours and then the choking feeling of who’s going to clean up all the mess.

What did your morning look like? Was it in order and peaceful? Did you even think to have breakfast? No, right? The only mission we all had yesterday was ensuring the food we promised to serve as the patient host, was delicious and cooked to point, without pulling out a dry, or even worse, burned bird.

I knew what our day was going to be like: A HOUSE FULL OF LOUD CUBANS, fighting over white meat, complimenting my mother on her mashed potatoes, spilling my dads sangria, as it’s passed around the table, and ultimately waiting for the moment to break out the domino table and espresso maker.

Because I was confident dinner for 20 was going to be successful and stress-free, I relaxed yesterday morning and even disregarded that I was responsible for 4 dishes.

Instead, I wanted to play with some more pomegranate goodies I left at my parents house from my visit just 2 weeks ago. My sister, on the other hand was irritated that all I want to do is create “new” food in this good ol’ traditional Cuban cocina. Whatever. My youngest brother, the pickiest of us all, was quite intrigued by what I was getting ready to make.

And, it’s still National Pomegranate Month, so I’m entering this recipe to their site for a special gig. Not to mention I’ve yet to tell you all about the exclusive trip to their orchards, which I will in just a few days.

The one thing we ALL agree on is that french toast is the best breakfast food. Ever. And I wanted some.

Sometime last year I made a very delectable french toast with sweetened condensed milk and coconut. Coconut is something I grew up eating as cavity-causing canned dessert called coco rallado en almiva (shaved coconut in honey), paired with guava shells. Can’t imagine it? Go ask any Cuban and they’ll tell you it’s the best thing next to flan. Entirely effortless and so good you WILL eat right out of the can. And, my mom loves coconut water, fresh from the shell, so it’s something we just like to have in the pantry.

So the original french toast I made with coconut, was a smash hit. If I’ve ever walked away patting myself on the back on something I made up on the fly that’s not akin to Cuban or Latin, I’d say  that was it. A certain man even asked me out on a date, it was so good. His lips said it all. 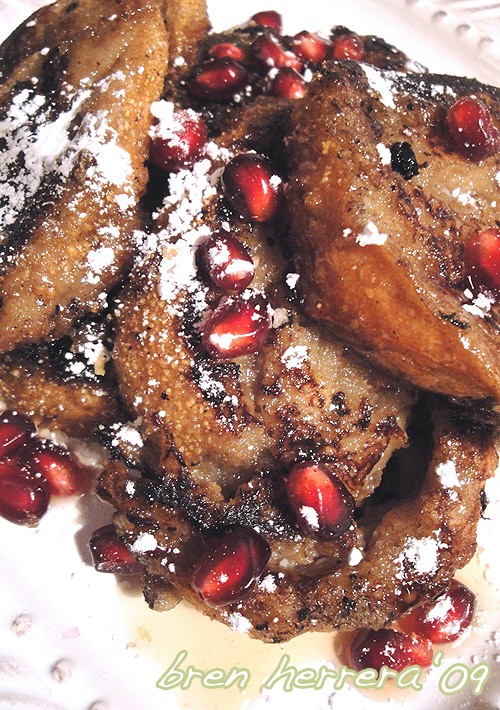 The version I made yesterday morning is similar, but with some alterations based on what was available amongst all the traditional Thanksgiving food. I definitely wanted to make a pomegranate based french toast, but something about adding coconut was going to offer an unparalled compliment.

We had brioche and french bread, both of which I used. As for the coconut, we didn’t have dry shavings, but we did have that canned coco rallado!

I went to work!

Instead of mixing sweetened condensed milk and coco shavings, I thought the canned dessert would work just fine. It’s already sweet and has just about the same consistency of my home made mixture of the two ingredients. The canned dessert, however, doesn’t have milk, rather honey, still offering a similar amount of sweetness and texture.  Now the pom juice. If’ you’ve had any of the flavored POM Wonderful juices, you’ll know that they’re not that sweet. I used the mango flavored one to off-set the sweetness off the coconut, not just to make it a pom toast.

It worked! Damn it was good!

The recipe below is the adaptation of the one I made last year, so it’s not as labor intensive. All you have to do is find the can of coco rallado made by ANSEL. You can find it in the Latin foods aisle of your local grocery store. If you feel like making this and can’t find it at your local store, email me and I’ll send you a can. It’s really that good and I want you to try it!

I hope you had a beautiful, delicious and blessed Thanksgiving! If I can get it together, I’ll share how this years’ turkey day went. I’m over here eating left-overs now!

New note: my brother, the picky one I mentioned above, TORE up the french toast even after 20 minutes of lights, flash and placing arils on the toast! Bona fide goodness.

In large bowl, whisk eggs and pom juice. Add dulce de coco and nutmeg and combine well. Place bread in egg batter and cover both sides entirely. In a 8″ non-stick skillet or stove-top grill pan, melt butter on medium heat. Using tongs, transfer each piece of bread to skillet and toast on each side, for about 2 minutes on each, until golden brown and edges are nicely toasted.  Do the same for all if the do not all fit at once. Transfer to serving plate and stack to your liking. Drizzle desired amount of syrup and powdered sugar. Sprinkle and decorate with pomegranate seeds! Yields 6 pieces.

NATIONAL POMEGRANATE MONTH GIVE AWAY!!!

So because it’s still National Pomegranate Month and I’m in love with the company and what it represents, the fab folks in Cali agreed to sponsor a give away in each post in my POM trip series (starting on next Tuesday) and even this one because it’l be the last post before the celebratory month ends! For this one, I’m giving away a hand-full of fresh pomegranates and a box of  12 POMx bars, straight from the factory! Two people will be chosen, one winning each gift. WHAT YOU HAVE TO DO: leave a comment  and then tweet this post,  including @brenherrera and @pomonline, which will give you an extra entry! Contest will end on Dec. 3rd, so get to it! I will use an Internet based random number generator, which I always use but seldom picture.

UPDATE 12/04/09: This recipe has been submitted and accepted for POM Wonderful’s Blogger Contest! I’d love for you to vote for it! There are other great entries, but I really do stand by mine because it’s rocks and is sexalicious! So, won’t you vote for it by clicking here http://tinyurl.com/ycfthtr. You don’t even have to register! Just clive the “Vote” button! Done. Thanks! Smooches!

12 months ago by Bren Herrera
Didn't have time to think of you were going to seduce your lover today? Or treat your bestie to a homemade treat? Because surely buying basic cupcakes at the grocery store is just so....well, basic. And we don't do basic. If you're out of creative ideas an...