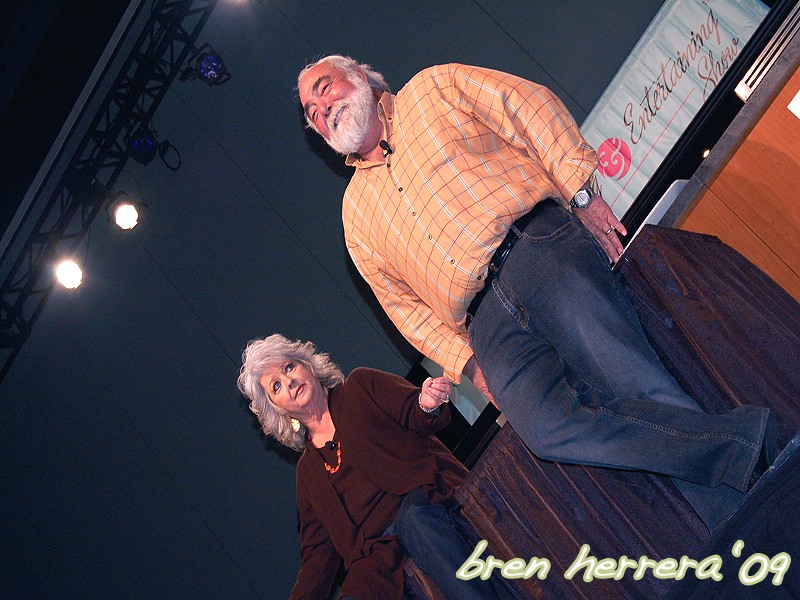 She’s just as loud and all over the place in person, as she is on TV. “Ya’ll” is not just something she says to set her apart from Emeril’s “Bam” or Rays’ “EVOO.” She really does just talk like that.

Paula Deen was not the personality I’d downgraded her to be. On TV, I usually found her somewhat scripted and over the top. But her performance and demeanor at the Metropolitan Cooking & Entertainment Show 2 weekends ago in DC, changed my mind. I like her. Albeit it was “her” show and she’s the cook–demo’ing her brand, she was working the heck out of her beloved Michael.  He’s so laid back and chill. He made a salad at her direction, while she took questions from the 1,000 or so in attendance in the celebrity theather. I was bumped from my “press” seat by guests that kindly told me they paid $1,000 to see her live!

What? No offense to Mrs. Deen or the ticket buyer, but $1,000 to hear her talk and answer questions could have been better spent feeding LOTS of hungry and needy families, especially now during the Holidays. But okay, it’s their prerogative. 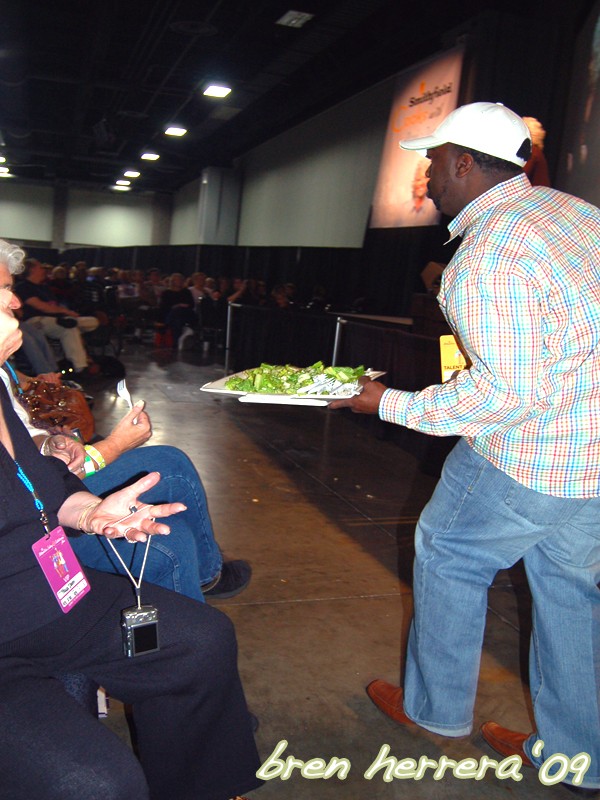 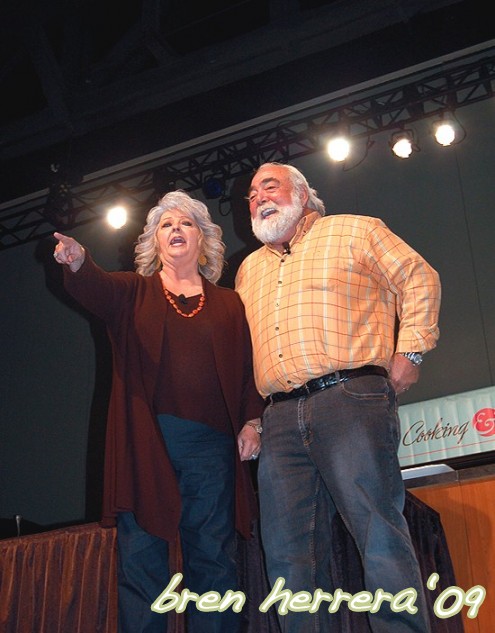 Her energy was great, she seemed to be very passionate, genuine and sincere, something I look for in the celebrity psyche. The one thing that stood out and sealed my like for her, was a profound comment she emphasized. The Neely’s, which had their show right before, came out during her opening. She hugged and kissed them and told the crowd how much she loved them because she really believed in them. The Neely’s in turn, respectully acknowledged that but not for Paula, they’d not be where they are. She saw and believed in what they were doing and supported them 100%. Paula’s attitude is that it takes support, espeically from us women to help each other get to where we want to go. As a “struggling” artist, I sure as hell wish Paula would see and believe in what I’m doing!

Maybe even the Neely’s!

It wasn’t just talk. She invited a woman from the audience whom had brought cheese straws or something like that (no where near as sexy as my flan) to the show. Paula tasted, liked  and invited her on her TV show.

That’s what I’m talking about! Note to Paula: I will hunt you down in my sexiest heel and have you taste every single flan I have. And maybe my oxtail which Emeril likes. One other note. Her people weren’t so nice. I kindly asked for a photo op (after all, I had a huge and bright yellow press pass) and I was rejected.

I left her demo early. 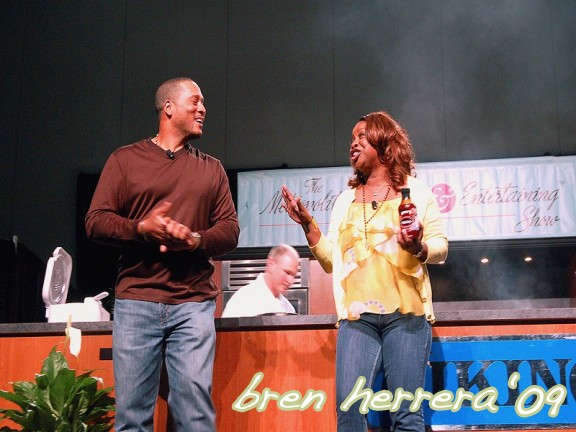 Now, the Neely’s show was off the hook! I sat next to their PR girl and Carla Hall (Top Chef); both nice young woman, which made the front row experience more fun. Pat & Gina are a hot mess–in a good way. Their interaction is short of magical, definitely made for TV, though I think Gina overshadows Pat quite a bit. But, like any woman knows, we’re always in control! She was bubbly but straight to the point. The back and forth banter didn’t seem to be so natural, but it works and comes off as fluid. He was a bit more relaxed and focused on what they were cooking. I did appreciate that they actually prepared several tasting dishes. 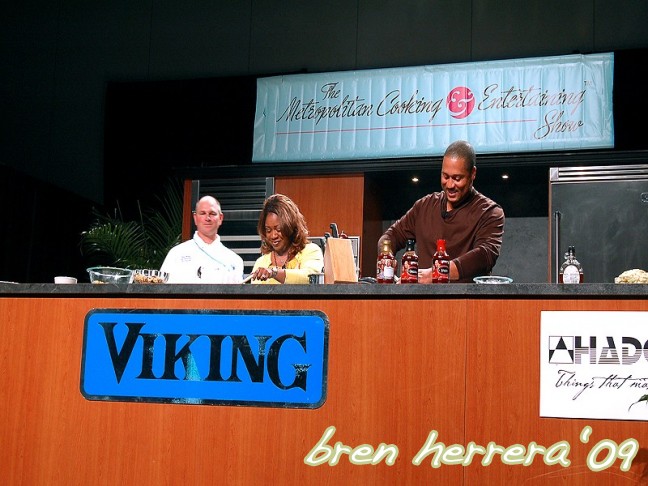 Some of the finger licking good food was passed around  to the crowd. Their presentation offered a great balance of love stories, logistics of running popular BBQ restaurants in TN, making TV work around their schedule, managing children and now touring with their debut cookbook.

They clearly are loving what they’re doing, but without being struck or changed by their new found celebrity. Though, I did notice Gina had on Tory Burch flats and a really nice Gucci belt. 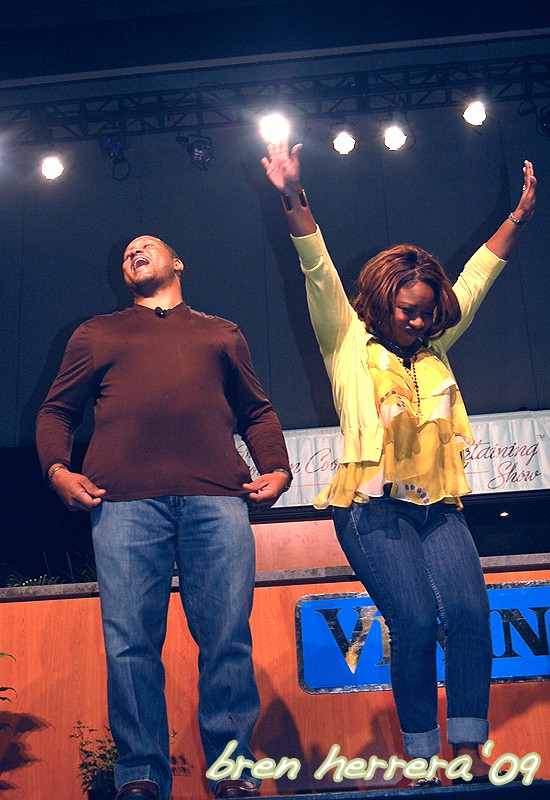 The Metropolitan Cooking Show is now it’s in 3rd year, to much success. Ironically, they only host them in DC and Atlanta, both my homes. I missed the Atlanta show earlier this year because of a similar PR/press hiccup; not with the organizers, rather the celebs’ people. I just don’t get it. I’m trying to share the experience with you, my readers, as best I can, and they are down right rude and unaccommodating. And, I’m not only press, I’m a colleague, too. 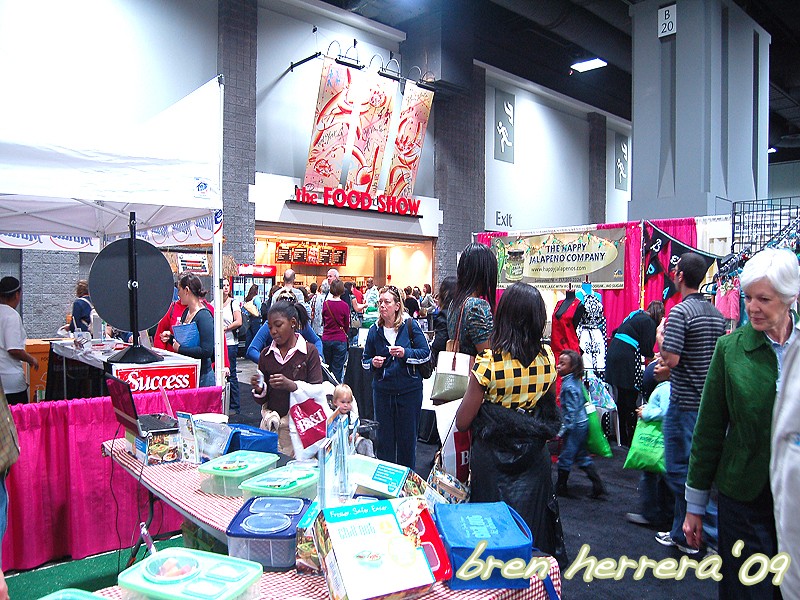 The show in general was nice, with a lot of food vendors and cooking demonstrations by local chefs and restaurants. I think the end result is great because it encourages men and women to cook at home, through the  different cooking utensil and product demonstrations and expert talk on certain everyday and gourmet ingredients. 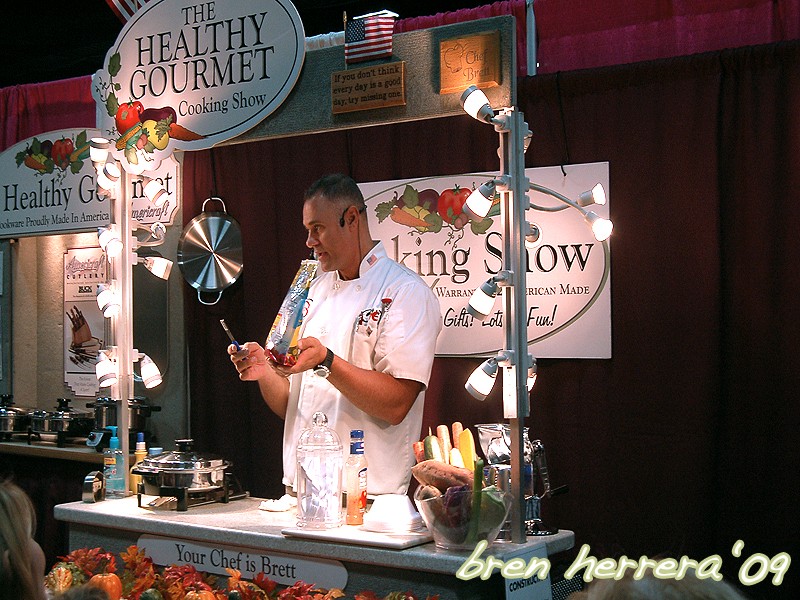 The celeb theatre hosted Food Network personalties like Paula, The Neely’s, Giada, Tyler Florence and Guy Fierri. I particularly enjoyed local Atlanta chef personality, Richard Blais (Top Chef), owner of FLIP, an aesthetically upside down burger joint.  He opened for Paula with a high energy demo of liquid nitrogen, what he’s known for. With it, he made frozen popcorn! He threw some out to the crowd and I dug my hands in the bowl of interns walking the 1st few rows.

That stuff was so good I thought of making popcorn chicken wings! 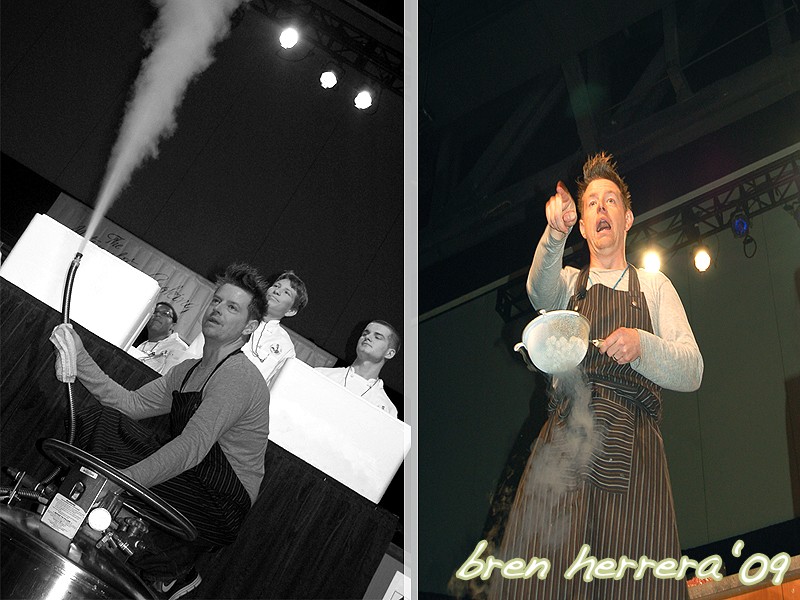 My dad came with me to the show, so we spent the rest of afternoon tasting food and sampling wines. Mom’s dinner was at home waiting for us, so we didn’t indulge too much.  He did enjoy some really good cheese and crackers, a standard at food shows. 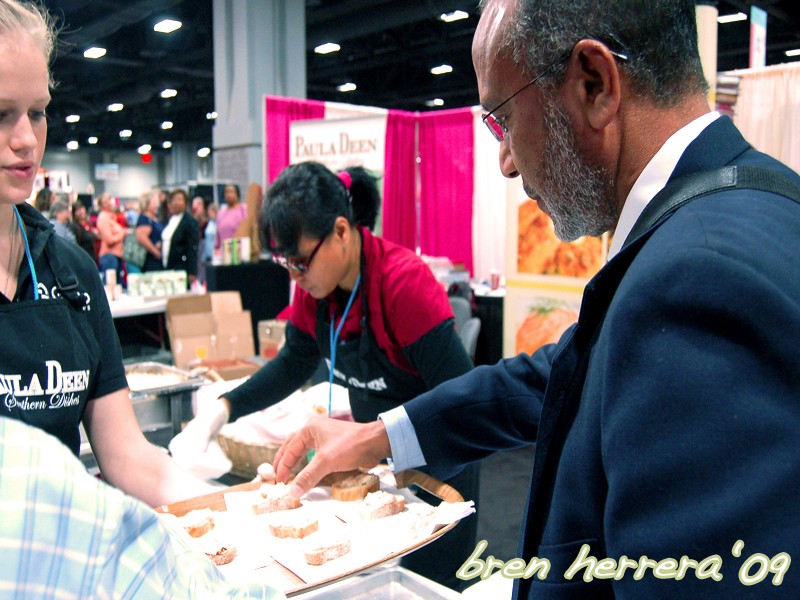 However, this chocolate company called Cholive (pictured below on right) I came across, made me lick my fingers and get all greedy! My goodness that was sex on a napkin! I can’t wait to order some. I browsed and asked questions more than anything, I truthfully didn’t find it to offer a plethora of options in different foods, especially local food purveyors. I did like a certain herb and spice company, whose name I can remember, but will find in the program. Their packaging alone entices you to taste. Plus, the older couple owners were sweet and kind, ensuring their set up was “pretty” enough for my picture. The honey company below on the left was also very nice. 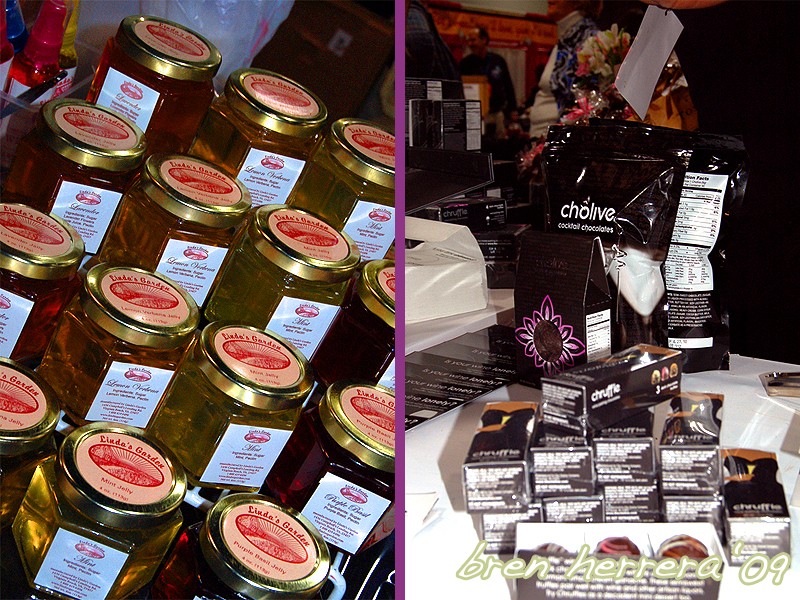 I entered the Wine and Spirits area and quickly left. I wasn’t in the mood to drink, plus it was a lot of wine to choose from. Again, not to many local wines, though there are some great winery’s in VA and MD.

There were quite a few non-food vendors, which I guess is good for variety, but not really necessary, in my opinion. This pillow maker was the best alternative I saw. The pillows weren’t cheap, but definitely intricately stitched with your states’ icons. 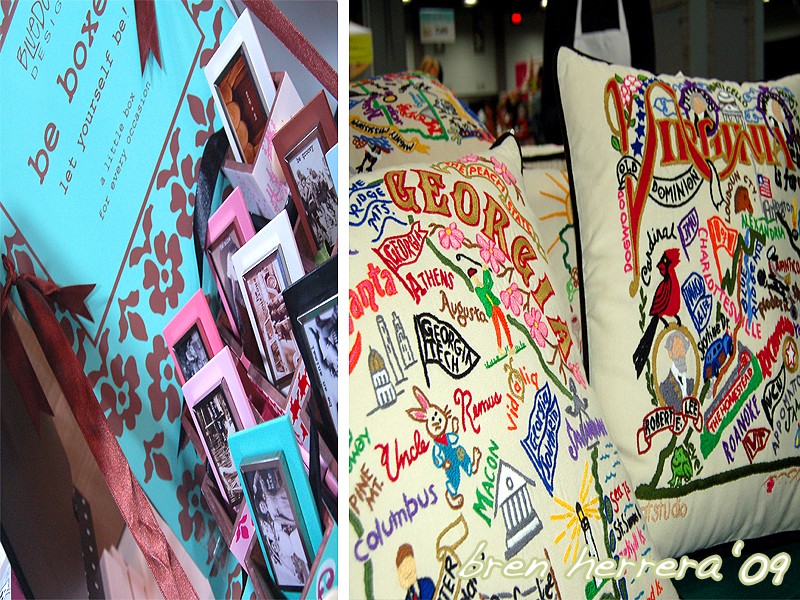 The one thing the show could have used was music. Maybe I missed it, but I think it helps ambiance and energy. I’m not talking Dave Matthews Band or anything, but some happy music would have probably gotten into the sublime of the wishy-washy shopper.

Maybe the wine and cocktails did that.

Overall, the show was a success, if you look at attendance alone. We went on Sunday and it was packed! Giddy women slowly walked from table to table, tasting, sipping and filling their goody bags with anything they could. Apparently, there were lots of samples given away, none of which I got my hands on. Even some fresh vegetables were thrown into goody bags.

Oh wait, and get this, my dad left me at some point and I had to hitch a ride home with my aunt, who happened to be there with some friends!

Clearly, his extent of foddie activity involves eating my mom’s food, eating in other countries and ocassionally trying my food!

He’s such a snob!

For more information on the Metropolitan Cooking Show, visit their site.

PLEASE DON’T FORGET TO VOTE FOR MY POMEGRANATE & GRAND MARNIER FLAN WHICH IS CURRENTLY FEATURED ON BON APPÉTIT’S SITE, UNDER “CUSTARDS,” 3rd page! YOU MUST REGISTER TO VOTE, BUT I PROMISE IT’S WAY EASIER THAN USING A PRESSURE COOKER! CLICK HERE AND VOTE! You have until Dec. 13th. TWEET IF IF YOU’D LIKE, TOO. I’D SO LOVE YOU FOR IT!

2 Part travel series on trip to Monaco, earlier this year, with video