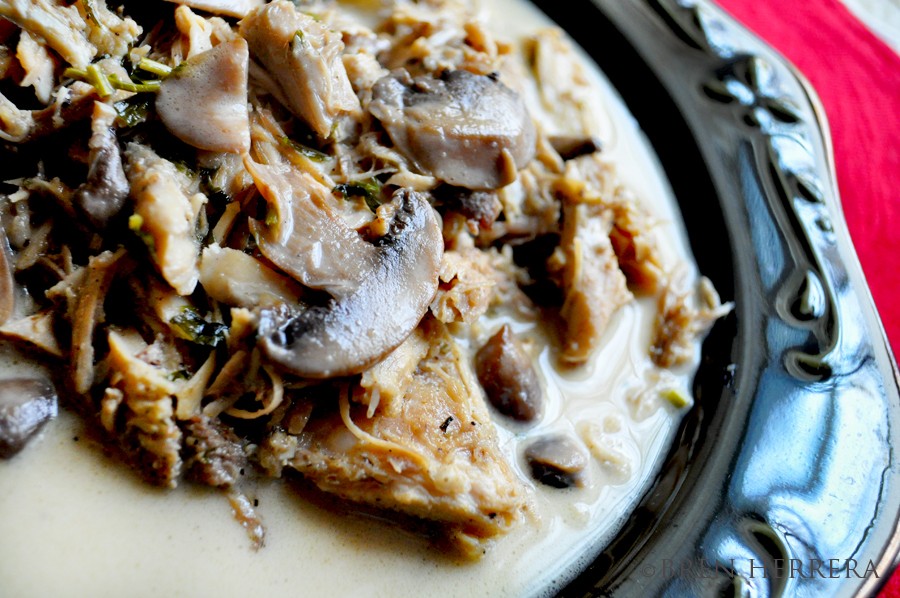 Thanksgiving is far gone, a distant past with Black Friday and Cyber Monday having superseded any memories created just 4 days ago.

One thing that’s still presumbly ubiquitous, and not overshadowed by mad rushes into the mall and squabbling customers for that elusive electronic item, at least in our house, is the turkey. Yes, the big bird is still around and being used to the bone.

Having a house full of 36 people, mostly family, you know there was a 20 pounder, justly done this year by my prima (my mom has mastered delegating cooking responsibilities–a feat hard earned for 5 years). Assuming we’d go through that one bird before the end of the night, one of my brother’s girlfriends also brought a turkey—a smoked one. My first smoked one. And, I loved it. In fact, I think it was the fam’s first time having it that way and surprisingly, it was a hit.

But, my cousin’s pavo, with 3 days worth of Cuban seasoning with a robust homemade mojo was the superstar and the one still lingering.

Under normal circumstances, all leftovers would have been thrown away by Saturday. We suffer from turkey overdose just like most American families do! I mean, how many turkey sandwiches, tacos, enchiladas, salads, soups and so on can you bear!?! I personally like the challenge of making the best of it all, but even after 4 days, I’m beyond done.

My mother on the other hand could eat it for 7 days. Papi’s usually done after Friday.

After committing to making Sunday dinner, a special one at that, I tried to convince him to use the rest of the turkey to make something simple. Mami had left the skeleton to just that and beautifully shredded all the meat. The remaining mojo filled the freezer size plastic bag and the pavo was left to anyone willing to have it again.

Convincing papi took a good 20 minutes. He was so done with it. Actually considers turkey to be extremely flavorless and plain ol’ boring. After I exaggerated how good my lunch earlier in the day had been (a bit of box stuffing and sweet fried plantain to accompany), he caved in and agreed to use it…

But, he was going to just warm up the leftovers and serve it with my stuffing or  even mashed potatoes. It’s either, or!

I recently subscribed Mami to Food & Wine, which papi is loooooving! In the last week, he’s made 3 recipes from it. It just so happens that October’s issue is all about French Classics. How fitting for my father whom is in love with all things Francaise… all.things.

He quickly flipped to a feature on Jacques Pépin and found a simple mushroom sauce with with one of his favorite cognacs… I remember distinctly swirling and sipping on a fine Argmanac with him and his best friend back in 2006 during a 3-week visit to France. That’s when my father really started getting into French wines, becoming more than a mere drinker. He’s since done his research and buys a bottle a few times a year. 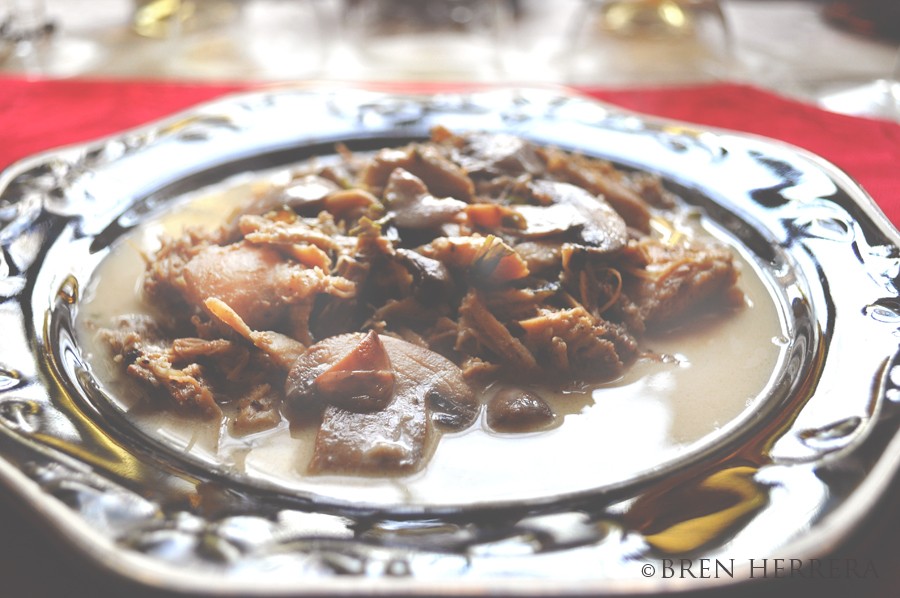 Watching my father cook is like watching a seasoned, trained chef. He cooks with such intensity and precision, that most times I laugh (internally) at the striking contrast between he and mami…. it’s sometimes comical. Inclusive of yesterday. His reference to the magazine is the only action that would give away his lack of formal training. Everything else is classic. But, always admirable.

He puts so much passion and amor into his food that even a 4-day old pound of turkey tasted as fresh as Pépin’s Capon rendition. Capon, having a similar flavor to chicken could sound better tasting, but with a mojo sauce like the one our turkey soaked in for 7 days total, there’s a good argument to be made for its fabulous impact.

I’ve made mushroom sauces a million times over and am always pleased. Simple. Rather quick and pairs well with our staple starch. This wasn’t all that different in method and honestly the use of French herbs didn’t stand out as much to make huge difference; but it was robust, beautiful and perfect in consistency. Papi served it with that staple starch, rice, and roasted asparagus. For mami, papi and me, it turned out to be just as good to have at least two days in a row.

And so yes, you guessed it right. I’m writing and eating leftovers.

Method:
Preheat oven to 400 degrees F. In a large ovensafe pan, spread turkey with existing sauce from your own turkey leftovers. Cover with aluminum foil and heat for 20 minutes or until hot enough to serve. While turkey is heating, make mushroom sauce. In large deep skillet, melt butter. Add white mushrooms and season lightly with salt and pepper. Cover and cook with moderate heat, stirring occasionally, until mushrooms are lightly browned. Add white wine and cook until just about evaporated. Add stock and simmer over medium heat for 5 minutes. Add cream and Armagnac and simmer until sauce has reduced to 2.5 cups or about 4 minutes. Remove from heat and whisk in corn starch mixture until all is blended well. Cook sauce over low heat, whisking until thickened. Remove from heat, stir in tarragon and season with additional salt and pepper.
Remove turkey from over and let sit for a few minutes. Transfer turkey meat onto serving platter and pour mushroom sauce over. Garnish with additional chopped tarragon or sprigs.
Serves 6.