My Signature Dish & A Tease!

(pot liquor is always good for the belly!)

I’ve been sitting on sharing this recipe because it’s being published in my cookbook. So I’m still not even sure if I’m going to offer the recipe this time. Please do forgive your friend if I don’t.

I think I was 20 the first time I cooked Pollo En Fricasse. Actually maybe 18 while in college. Either way, it’s the most amazing chicken dish I’ve ever had. It’s a Cuban classic. I’m sure every Cuban cook has their version but I’ll go all out & say this one is the best. Yup, sure is! Given to me by my mother, I’ve adjusted it slightly.

This is even better than the French coq au vin classic. Especially since it’s not a labor of love like the latter. Who wants to spend an entire day cooking something that is going to be devoured in less than 30 minutes!?

(Alton Brown makes it look so easy when he makes it on “Good Eats”-the magic of TV, I swear!)

Though this is my absolute favorite chicken entree, I wasn’t very happy last time I prepared it for a formal group of media. See when I cook, it’s always from my heart and gut. There’s always a cup of love in the pot. But this last time (which was over a year ago), I didn’t feel so good making it. I was a bamboozled into cooking for a large group of snobby journalists! I was under the impression I’m cooking for an intimate party of 10, including me and my guest. But the hostess intentionally failed to mention it was her b-day and decided to make it a 40 head b-day party.

So it took a few months, but it hit me! I got got! She wanted her friends to think she had a private chef. But why wouldn’t she have told me it was her b-day? And once there, why wouldn’t she throw me a a tip!? Something, right!

After all, I had spent over $100 bucks, 40 minutes to her place and over 2 hours cooking. And a sista was broke then.

Well what I learned and have appreciated since, is that my main entree, being this pollo, was a smashing hit that night. Everyone loved it and some asked for the recipe. I was quite confident they’d love it so I was just content there were no leftovers.

It was so good, it landed me a live appearance on TV. So I’m not mad ya’ll. Just hate that I got tricked into cooking.

When I realized and claimed it as my signature dish, I stopped giving the recipe away. An extended family member is the last recipient of this goodness, and even then it took me 2 months to respond to her email!

And after writing this post, I have gotten myself all worked up about the dinner party, so I’m so sorry to impart another day of not sharing. But I’ll share pics with you and even encourage you to try to figure it out!

(update: ooh, a reader said she was going to Google it, which is all good and gravy, but it won’t be mine!! 🙂

I cooked this yesterday for an impromptu get together at my friends house. I love it how friends so casually say “Hey “B”, I’m cooking lunch/dinner, wanna come over”? And yet somehow I end up cooking. How exactly does that work? Ultimately, I was okay with it b/c 11 of the coolest people enjoyed it and one in particular cleaned his plate as Geisha (my bishon) does her bowl of Pedigree lamb & rice.

And in the pic below, I was only responsible for the chicken. Plating here was very home-style, since we were chillin’ watching football all day. Perhaps for a client, the carrots would have been cut prettier and the rice would have been juxtaposed a bit differently. Just more gourmayish (yes my way of spelling it!:)

All else was prepared by S, my newly prego friend! You see those plantains? They look so good and were actually from a frozen bag! I’d never had them so I was pleasantly surprised at the natural flavor. I don’t know I’d make them at home, but if you’re in a hurry and can’t even find ripe platanos, go for these.

(Chicken being cooked in the pot. All goodness not yet in) 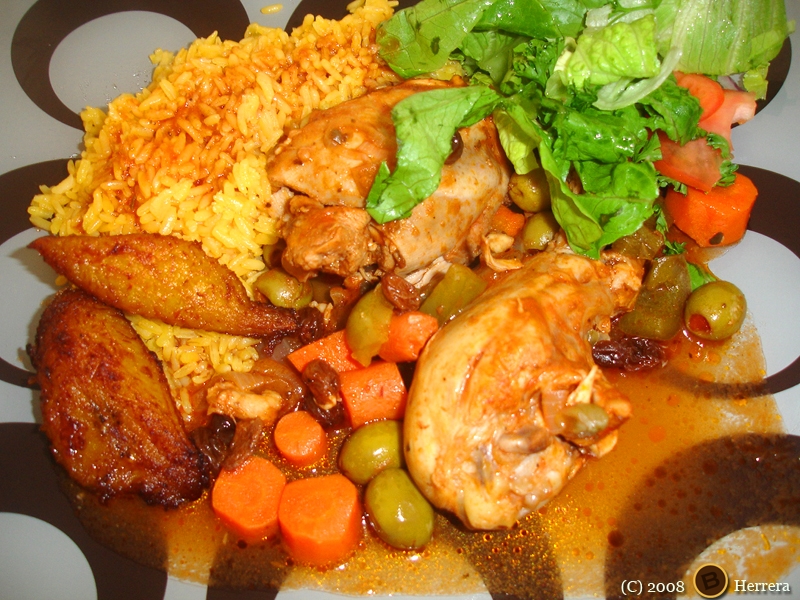 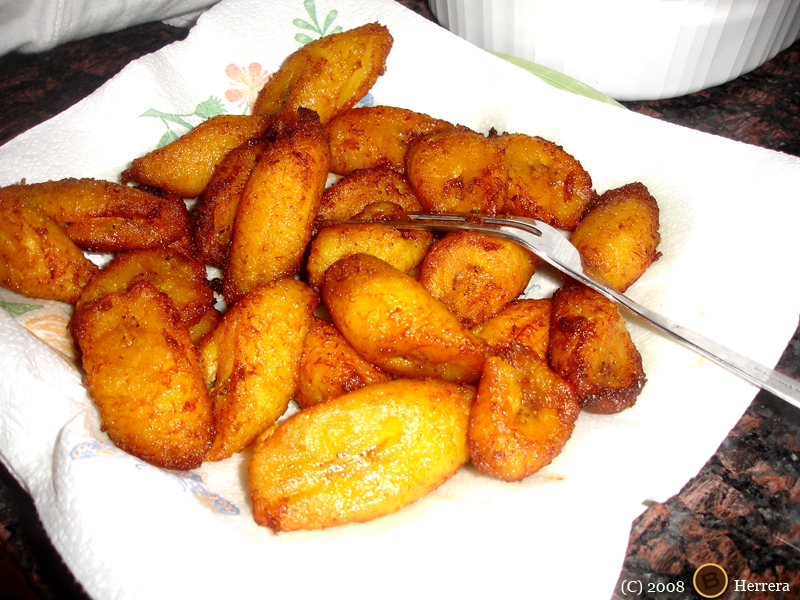 I don’t make many promises, but this chicken dish is something that will cause you to love Cuban food, love yourself for cooking Cuban food and confidently tell him that you’re not going to marry him unless he does the dishes every single time you cook!

If you figure the recipe out, enjoy and let me know! I’d be so curious!

Cooking With Emeril, It Really Happened!

0 thoughts on “My Signature Dish & A Tease!”