National Truffle Fest. A Most Decadent 3 Days…Part I 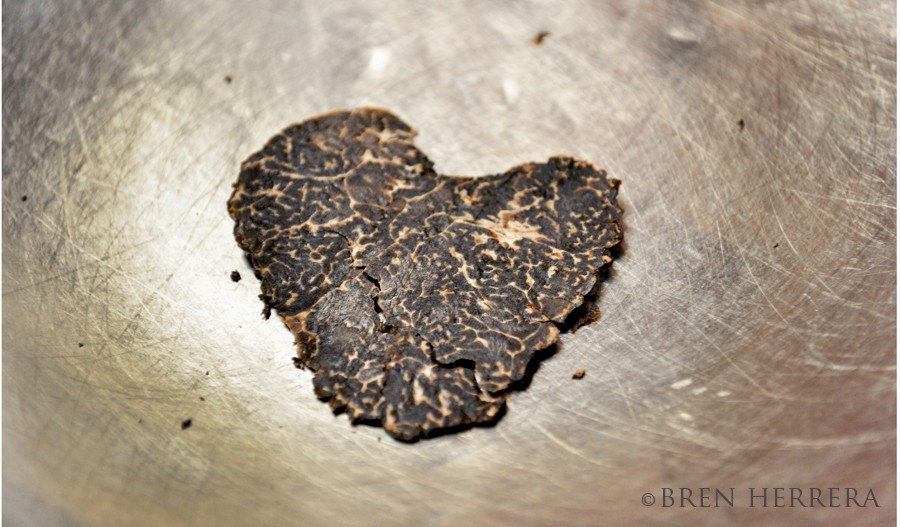 But wait. I speak not of chocolate truffles. When I Tweeted and Facebook’d that I was attending the 3rd Annual National Truffle Festival in Asheville, N.C., this past March,  I received an unbelieavable amount of jelly responses kindly suggesting I indulge in yummy chocolate for them–those that couldn’t go.

And those that didn’t realize I was about to spend 3 days eating the world’s most expensive mushroom. Not chocolate.

On a wet and balmy weekend, I packed up my car and drove 3 hours through the lovely mountains covering GA, SC and NC, until I arrived in Asheville. My first time ever there, I was really excited to make my first visit an ultra delicious one. But, beyond it being delicious, I was eager to thrust myself into all things truffle.

I checked into The Overlook suite, a French-style mini-chateux at The Villas at Biltmore Village. If you’ve been following my tweets and FB earlier this year (and maybe even some subliminal hints here on the blog), I was supposed to be in Paris at the beginning of March, so ironically — or not –being hosted at a French-style flat, fully equipped with a kitchen I’d rip out and plant in my much smaller condo, curbed my frustration with still being in the States.

A cozy stay in the 2,500 sq. ft villa while attending seminars on harvesting truffles and eating nothing but, definitely created a faux yet fancy euro-ambiance.

As lucky as I was to be shacking up at the Villas (and I wasn’t even in the poshest suite), I was conveniently a walking distance away from The Grand Bohemian, the festival’s host hotel. This place is gorgeous! Right up my alley of style and aesthetic. Very rustic, boho chic, warm and exotic. Exhibiting that Southern charm, staff was overwhelmingly helpful. 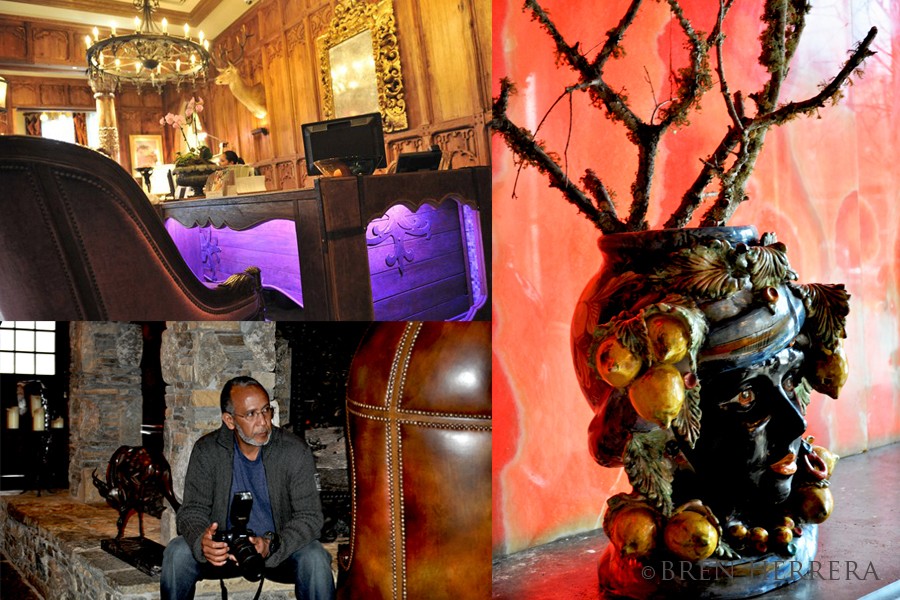 On to the fest. Very young in its existence, it celebrates the Black Diamod Perigord truffle. It’s a very niche and distinct festival, attracting mostly chefs, existing growers and some interested in learning more about the growing harvest industry in the U.S.

Presented by the Frankie Lemmon Foundation, the Fest’s mission is to set a stage for a variety of educational and engaging forums, sessions, cooking demo’s, wine and truffle tastings and a local walking tour of joints that incorporate the delectable fungus into specialty dishes exclusively for attendees of the fest, all through a tasty 3 day spread… finishing off with a classy ball that raises money for the Foundation.

A charitable weekend, so I was in. I opted for it all and invited my parent’s to join me.

I knew I was going to be bombarded with a load of new information and exclusive opportunity to meet and interview reputable growers in Virginia and Tennessee.  I need help. Dad was editor-in-chief and translator (more on that later), while mami charmed and took some pictures while I networked. 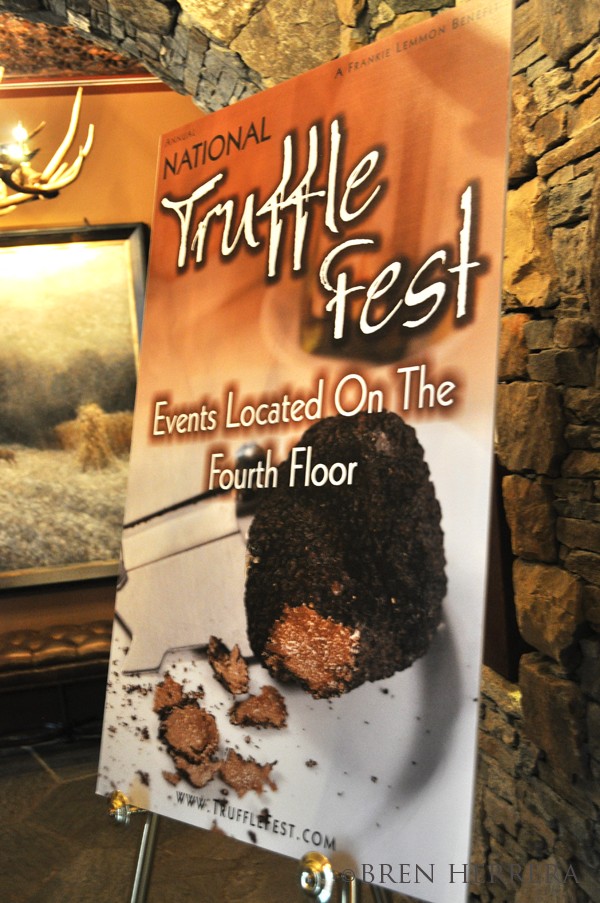 Festivities kicked off on Thursday night which I missed but made it just in time to attend the latter half of the Truffle Growers’ Forum on Friday morning.  The ballroom was intimately packed with the ulitimate foodie and highest grade of fancy food afficionado. I knew I was the only blogger and media in attendance so I’ll   disclose that I got some special attention from festival organizers and truffle purveyors.

The 3 hour session was mainly an introduction of the black truffle, the main growers in the States, the intracasies of growing and cultivating the gem, the politics supporting (or behind) the industry as so candidly spoken about in this New York Times piece (appropriately published just days before the fest kicked off) and a open table conversation on how a newbie can get started.

Okay, so the talk was almost foreign to me, that I turned on my voice memo app on and started recording. Words I’ve never heard of were thrown out and questions I’d never even think to ask were posed.  Yeah, I LOVE to eat food that’s fancied up with truffles and even buy the “fake” oil (something I have been researching), but the logistics of how they are bought and sold go right over my head. I can even boast knowing some history on its origin and more specifically the hunting process, but these attendees were on another level understanding.  Clearly, the ONLY person in the room not yet interested in starting a farm, I intently took notes and photographed so as to really appear as press. Though I was really and truly more curious to learn more.

Cultivating truffles is unique and for the patient. And requires a lot of money and planning. That’s the one thing I immediately learned. Totally confused by the jargon (like buying inoculated trees!?) I was eager to break off and go see some truffles and come back to the schooling later.  I needed to be tickled, first. You know, so as to excite the buds and transfer energy to brain which was about to go into information overload.

Chef Adam Hayes, the fine young lad heading up the kitchen at The Red Stag Grill inside the Grand Bohemian (whom I’ve talked about here), and I quickly made our acquaintance. I found him quite cute and even more attractive when I learned he had 5 lbs. of fresh and frozen truffles secretly hiding in his cocina. Oh yeah… you know me. I batted my eyes and asked for tour of his working space.

I had a serious agenda.

While a marketplace and a few other seminars took place, most notably the Scotch and Cigar tasting, I was being entertained by a slew of fellas cald in their comfy chef gear preparing for the Wine Maker Dinner later that evening. It was intense down there. One chef,  standing over a bright red Kitchen Aid mixer gave me that eye: “what are you doing in here woman” kinda look!

I moseyed around, snapped some shots of the prep line, casually asked what was on the menu, even get to taste some truffle shavings going into some lovely potato latkes and finally, finally made my way to the secret place.

I need no words for this picture.

Adam and I spent 10 minutes in the freezer and talked about how each host restaurant for that eve’s dinner was given a good stash to work with. My mind drifted to staging a plot on how to get my own hands to look like his– but only in my kitchen.

The truffles, all 25 pounds, were generously donated by the flamboyant purvyer and well-known truffle tzar Franklin Garland and his sweet wife. They’ve selflessly sponsored the festival every year since its inception and support its mission with lots of passion and notable ferver. Owners of the largest farm in the United States, Garland educates, assists and consults and sells trees to new and old buyers. His is a lucrative business, but one replete with labor of love and surely not without legal wars (see above or here).

I spoke with Mr. Garland. Danced with him and walked away appreciating the biz. But not until Saturday night, hence Part II of this series.

Friday ended with very luxurious and well-planned dinners throughout Asheville. I was assigned to dine at the fine The Inn at the Biltmore Estate. Second to eating at three of Joël Robuchon’s restaurants in Monaco and NY, dinner at The Inn was the most exquisite and refined experience. My dad a fantastic job of reviewing it here. Be enticed and fall in love.

Saturday’s agenda was the delicious one! This is when we cooked, ate, interviewed national and international growers, took wet walking tasting tour of the surrounding neighborhood and finally, where I got my dance-on at the Chef’s and Vintner’s Gala.

All that, in Part II, so stay tuned!

{some recipes I’ve made with fresh and frozen truffles you may be interested in:}

* While I thoroughly enjoyed myself and benefitted as much as a paying attendee, I did play the require media/blogger part and absored a lot of informative figures and stats about the industry; especially through the one-on-one interviews. If there’s anything you’d like for me to answer or address in the next post, feel free to let me know in the comments!

0 thoughts on “National Truffle Fest. A Most Decadent 3 Days…Part I”