NYC, Ben Sargent, & Me Clawing Through A Catch of a Dinner 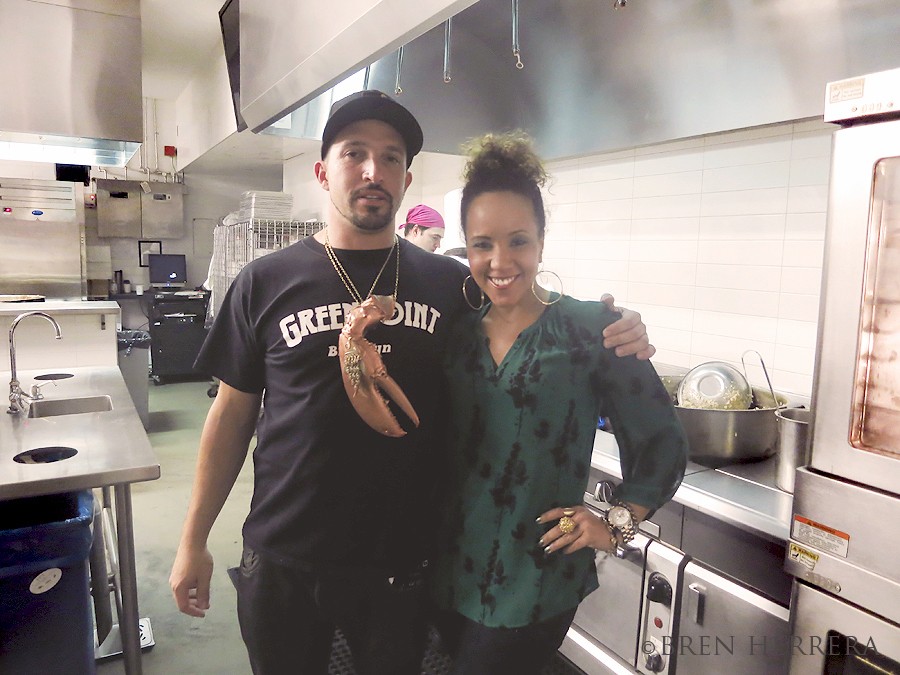 New York City really is the epicenter of everything. And I love traveling there to throw myself in the glorious scenes of fashion, food, culture, art, and people watching! I was back there last weekend (I’m thinking it’s time I consider a part time spot up there) for the 10th time this year, to grub my way through a few events. My last few visits were in part personal so I got to explore digs I’ve heard marvelous things about and others I love patronizing. Those are the best. But this visit was a bit more constructed with a full out purpose: to explore how cheese is incorporated in fish dishes and the almighty bread loaf. My friends at Sargento Cheese flew me to the city to enjoy two sexy events at the New York Wine & Food Festival. After spending a whole month perusing their site and detailing the different options, I went for a formal sit down dinner with Cooking Channel’s ‘Hook, Line & Dinner‘ show host and urban chowder surfer Ben Sargent. And an over-the-top 3 hour bread-baking class at the International Culinary Center.

I hung out in the city most of Saturday, looking at the typical but never boring sights at Rock 30. Had lunch at Bouchon‘s Bakery, enjoyed a cheese plate with dried fruit with a faro salad, and taxied my way to TriBeCa where Chef Ben was going to feed me. And feed me he did.

Of the 5 courses, I could only eat one.. in theory. In practice, the menu looked amazing but since I don’t eat shellfish, I had to sit through dinner and watch two other diners fight over my plates. No lie.

Of course, had I known the menu was going to be replete with crab, lobster, oysters, clams, etc… you know, all the yummy stuff (I can only imagine), I would have entertained myself at Martha Stewart‘s cake baking class. And I would have ever-so-nicely interjected how incredibly talented I am at developing recipes, and executing them, and so forth and so on. Oh right. Because I do it all myself, without a team or entourage or a state of the art test kitchen where my little minions do everything for me while I just go to the green room and prep for my appearance. Nope. Sure don’t have that. She does, though. So, sure. I totally should have gone to her cake class.

Back to dinner. And to the chef. He’s cute. And such a New Yorker via Boston. Rocking a ginormous lobster claw around his neck, very much a la Mr. T, Sargent spoke about his love affair with water and fish. He comes from a pretty dynamic family situation. Dainty and proper mother. Gun-bearing and hunting father. Two lives in essence. But he loved to fish.

And hustle lobster rolls out of his apartment in Brooklyn at 5 am. The NYPD was in on the hustle. So was the Mayor. The health department? Not so much.

So they shut him down. 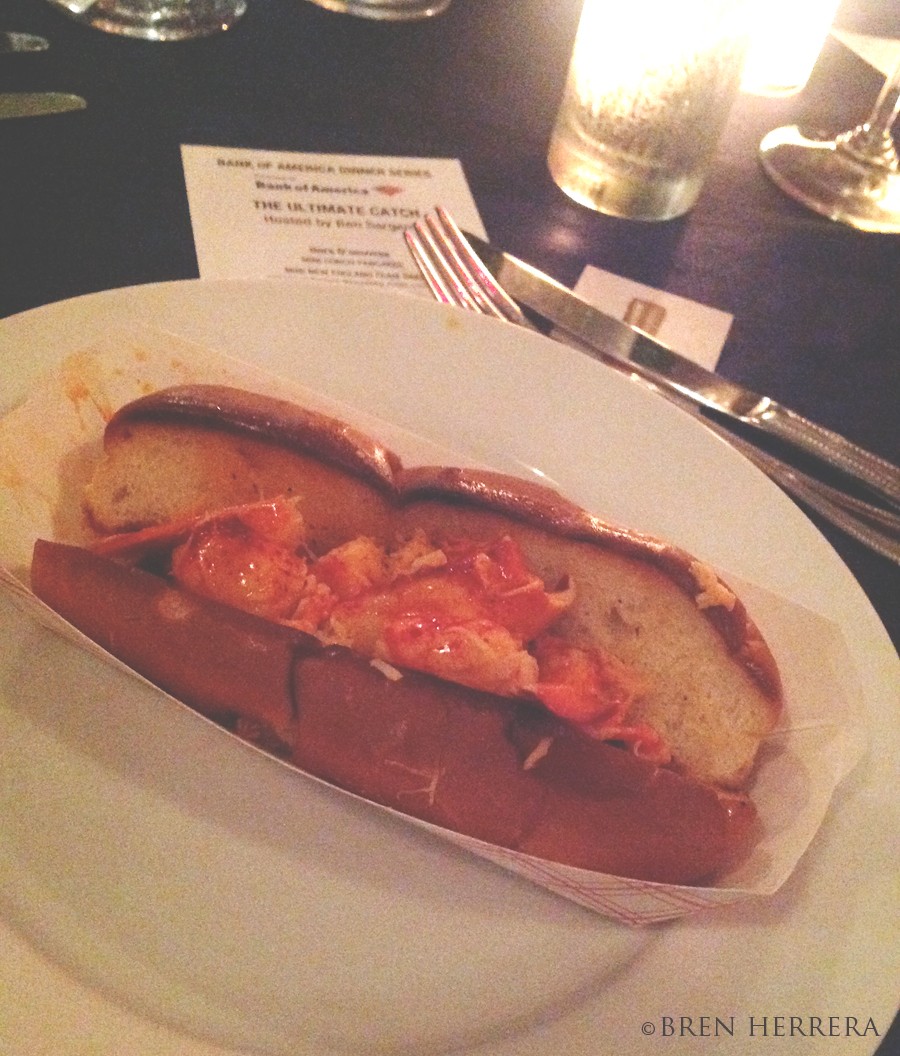 He finally legally formed his lobster biz and became the hit he is today.

Clearly, the simple filling on a regular hotdog bun was pretty tasty, but seemed a bit skimpy (see below). He says every Bostonian should know how to make a good lobster roll. And humbly admits his is nothing out of this world or fancy. Just kick a** good!

The other two courses seemed really nice. But I was really looking forward to the main course, a halibut with some kind of risotto and a blackberry reduction sauce with some heat coming from harissa. It looked pretty good. And actually tasted okay but was missing something. I’ve still not put my finger on the absent magic ingredient. Individually, the three things tasted lovely, but collectively, it seemed to lack cohesion.

So here’s where cheese comes in. You had to see it coming! How about some cheesy risotto?! I mean, that only makes sense, no? The fish was slightly overcooked. The sauce was really, really special with a great balance of sweet, tart, and spice. But the risotto just sat there. Begging for some attention. A Sargento Havarti or even the Artisan Parmesan would have paired extremely well with the rice. It would have added an added dimension to a plate missing some star power.

There was some redeeming factor in all of this. A student based catering group was preparing the dishes. So to his credit, perhaps the dishes could have embodied the vibrancy and raw personality he naturally has (proven by the dishes’ picture in this book, which is depicted as I would have loved to see; page . Which is what made him really good to watch on TV. He loves fishing. Loves what the sea holds. He’s very passionate about education his fans about blue fish, his favorite ever. 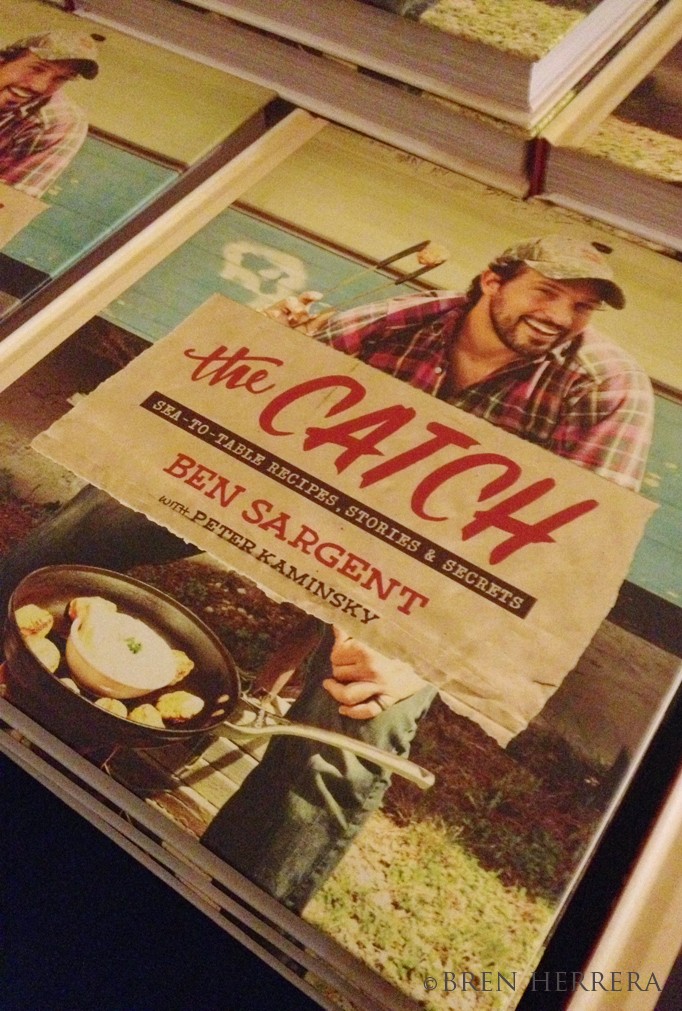 The goodie bags at our exit included his very stylish and vintage-inspired book ‘The Catch.’ I sifted through the book and knew I had to find some fish dish with some highlighter cheese. Sure enough. If you snatch up the book, flip to page 160 and drool over his ‘Lupe’s Spanish Mackarel with Sautéed Mushrooms and Provolone.’ Now that just sounds heavenly and a dish I would have snuck a second of. Much like the halibut dish at dinner — oh yeah, two  young PR girls sitting at our table excused themselves in the middle of dinner, leaving their servings up for grabs.

Oh, of additional credit to Ben, whom I really, really liked, here’s what the halibut dish really looks like according to his own doing as seen in his book. I’m equally shocked at the lobster roll depicted in the book vs. what was served. I just shared this one on Instagram. Wow! Same plate? 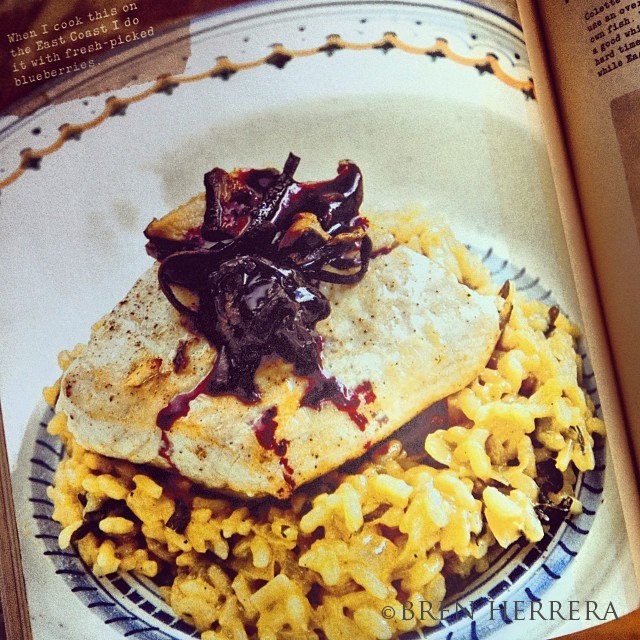 Food is creative. Creating and cooking is artful. There’s nothing you can’t really do if you know some basic science of how ingredients works. Fish and cheese? Yup. Sure does.

I’m kind of tempted to make that mackerel dish — one of my fave fish to have as sashimi.

Thanks to Sargento, I enjoyed a lovely 2nd day in NYC, becoming an unapologetic glutton and nibbling on already made bread during our Hot Bread Kitchen hands-on class, which I’ll recap next week! It was glorious as it sounds.

What’s your favorite fish and cheese dish? I’m wildly curious because this girl just hasn’t expanded my research into that combination!

* All pics taken on my ever-malfunctioning iPhone 4s. Not fun editing dark ambiance pictures 😉 Also, this trip and post are part of my work as a Tastemaker and spokesperson for Sargento.

32 thoughts on “NYC, Ben Sargent, & Me Clawing Through A Catch of a Dinner”