Park's Edge. So Fresh & So Clean 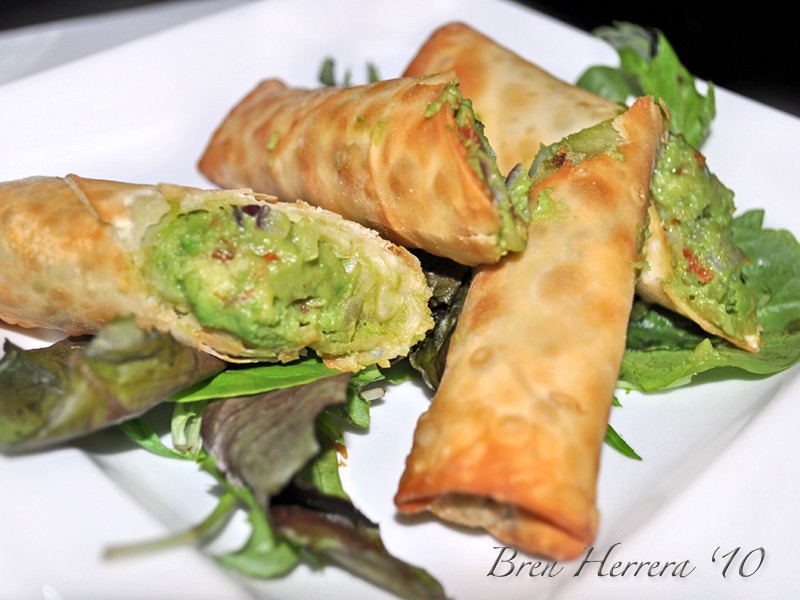 Atlanta is a tough place for a restaurant to survive. The more I eat out, the more I take it to heart and appreciate a restaurant that’s been in the game for longer than two years.  Especially when it’s semi fine-dining. You just never know how long these concepts are going to last.

Inman Park is an eclectic neighborhood in Atlanta that offers 24-hour coffee hot spots, cute shoe boutiques (which I’ve yet to attack), wine bars and the gamut of restaurants, ranging from American, Mediterranean, Latin and fusion. Not all have lasted, giving room for new ones to open. Park’s Edge took up some of that real estate, though nestled in a hide away cul de sac,  pretty hard to find.

Its location makes it attractive to neighborhood inhabitants and a cute gem to others.

I ate at this now 3 year old contemporary and Latin-infused cuisine restaurant earlier this year while taping a health and fitness segment. Chef Jorge Pacheco, a Mexico City native, dished out some tasting plates during out taping, starting with the aguacate egg rolls. At sound and sight, they were amazing–a mix of a savory fruit with a crispy shell. But upon taste, it didn’t work as well as I would have liked. The avocado, more like a guacamole blend, was naturally softened even more and was warm–a distasteful uncharacteristic aspect for something that could be so wonderful. It’s been so long since that evening, causing a memory lapse in what else I bit into.

But, the eggrolls, even in their almost successful hit, called me back. I wanted to see what else Park’s Edge had to offer beyond a mushy guac.

The décor of the bronze lit dining room is warm and very inviting with its deep orange and chocolate window treatments and large art work. The bar area to the right of the front door is more laid back, tables barring linen, and flat screen TV’s airing a football game. The formal dining room is a bit larger and offers an intimate setting with white linens and wine glasses on each table. Both rooms are separated by a hallway where the restrooms are located–an uncanny place, but it’s an odd space to begin with.

I had dinner in the more airy dining and bar area, sitting next to a female vocalist . My guest and I were  greeted by the owner, Richard Wadlington and the nice server, both who ran down the evenings’ choices. While I perused the menu, I nibbled on the egg rolls. Not much had changed, which could be good or bad. They were consistently warm, solid in flavor and crispy. I enjoyed them, but kindly recommended the guac be maintained at room temperature. I think they’d be a greater hit.  Thankfully, the server, a culinary school grad, understood my concern.

The butternut squash didn’t last more than 3 minutes. It wasn’t at all because I was hungry, rather because this one worked. It happens to be my favorite fall soup and few I’ve had have been better than mediocre. Jorge’s version was creamy and included all the right ingredients to make it the perfect soup option. 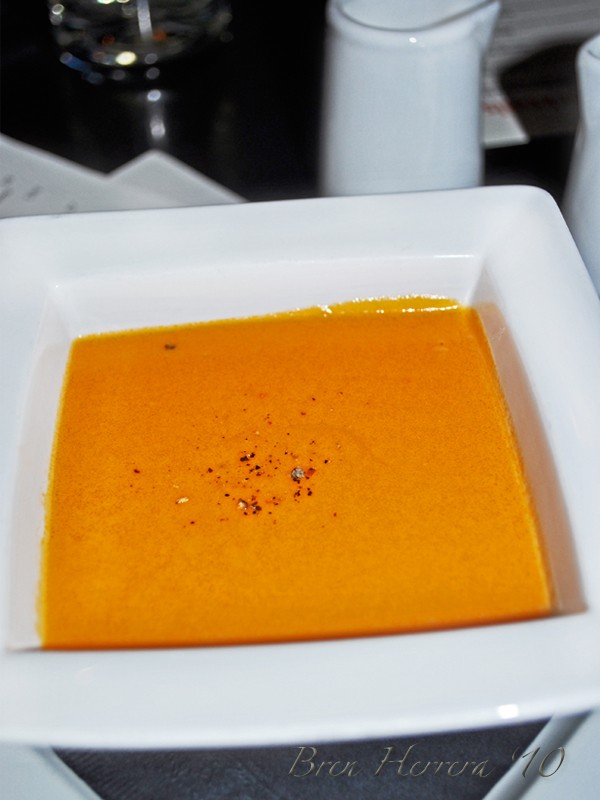 Before our  entrées, I drooled over a lovely roasted garlic bulb which embodied all the wonderful properties of sting, flavor and texture.

What’s not to love about this?!

The main courses were a great mixture of high-end Latin flavors and textures juxtaposed with elegant American and French classics, like the Lemon & Rosemary Sautéed Chicken served with Spanish rice, asparagus and lemon beurre blanc. The flank steak, one of my favorite cuts of beef  made it to my friend’s plate and looked divine. He paired it with the ginger sticky rice–smart, smart move. The rice was sweet and added great contrast to the light heat of the chimmi churrie salsa. However, flank is a tough cut because of its lean nature, so tenderizing it can take some time and effort. It was clear that time may not necessarily be on the kitchen staff’s side. The cut was a bit too tough for my chewing. Great in flavor, though. 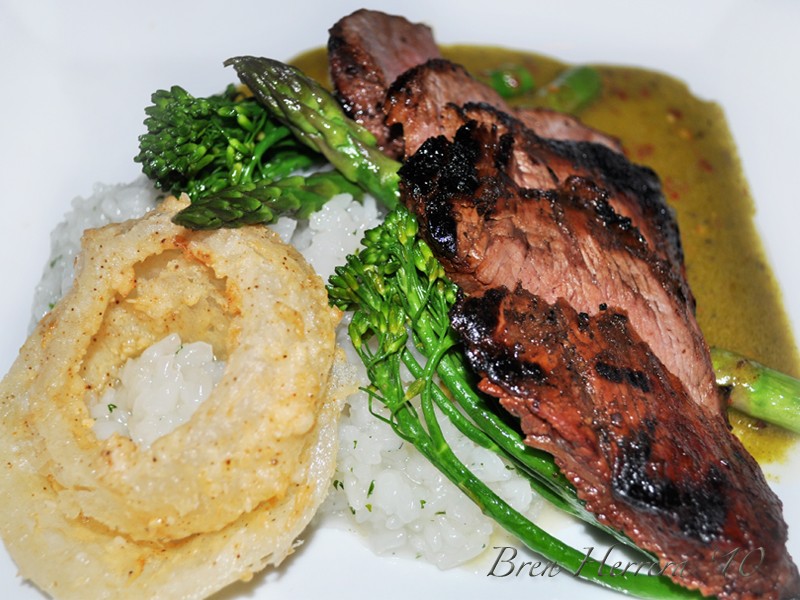 I opted for the New Zealand Rack of Lamb served with cimini mushroom risotto, tagine sauce and asparagus. Another hit, though again a bit off. This time in the balance of seasonings–the tagine sauce was a bit on the salty side, taking away from the riosotto, which was incredibly creamy and cooked to utter perfection.

The lamb was juicy and surely I cleaned it like my dad taught me–marrow and all! 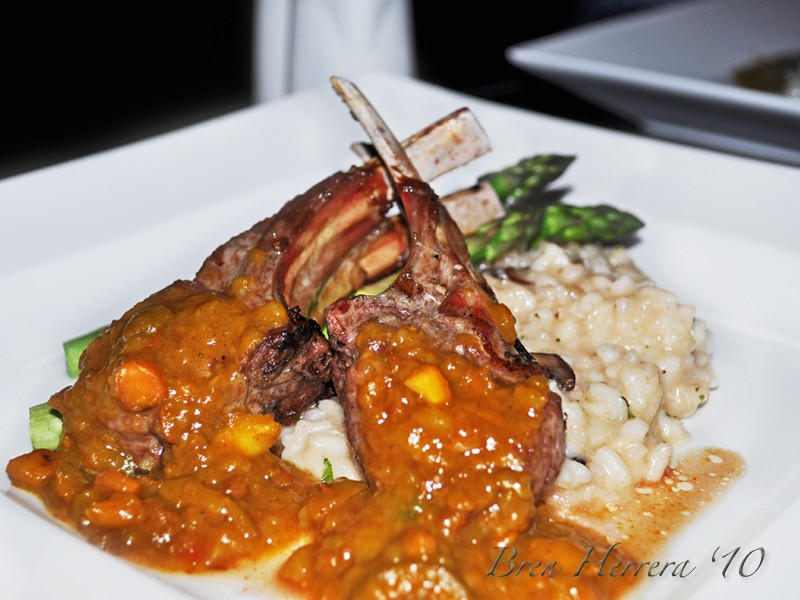 I skipped on drinks but allowed dessert to melt in my mouth. Of the selections the only one that really jumped out at me was the apple crisp with vanilla bean ice cream and pistachios. Unfortunately, they were out of the green little nut, so it was substituted for walnuts. They worked, but I’m certain the pistachio’s would have knocked out it the park!

The plates were consistent and well thought out, notwithstanding the afore-mentioned palate and texture issues I had. They were addressed, ultimately, and that made it better. The element of great service is important in the success of a restaurant, no matter how big or small, fine or quaint dining. Our server was friendly and very knowledgeable with the menu. Most importantly, she was honest about what worked and what could be worked on. If you aren’t shy, make sure to meet the owner. He’s a nice guy with a North East attitude that will keep the place up and hip. His and Chef Pachecho’s innovative ideas for Sunday brunch may be their solution to a packing the place out an otherwise slow post-church afternoon. And do talk to Jorge and let him know about your experience. He’s very open to ideas and is very confident in what’s he’s serving. That’s a recipe for success any day. I felt good telling him about the flank–he understood. He’s fresh.

Next time I’ll have the Seared Seabass with yukon truffle mashed potatoes, asparagus with chipotle cream sauce. Sounds like a marriage that can’t possibly go wrong! Especially since all options are affordable and served on sparkly white dishes.

*Parking can be a bit tricky, so valet your car. Ladies, make sure  you have a gentleman walk you to your car if you’re dining alone or with a group of gals.

* Enjoy Sunday brunch on the heated patio during fall and winter and breezy during spring and summer. I hear they have live jazz to lace your ears while you eat mid-afternoon goodies.