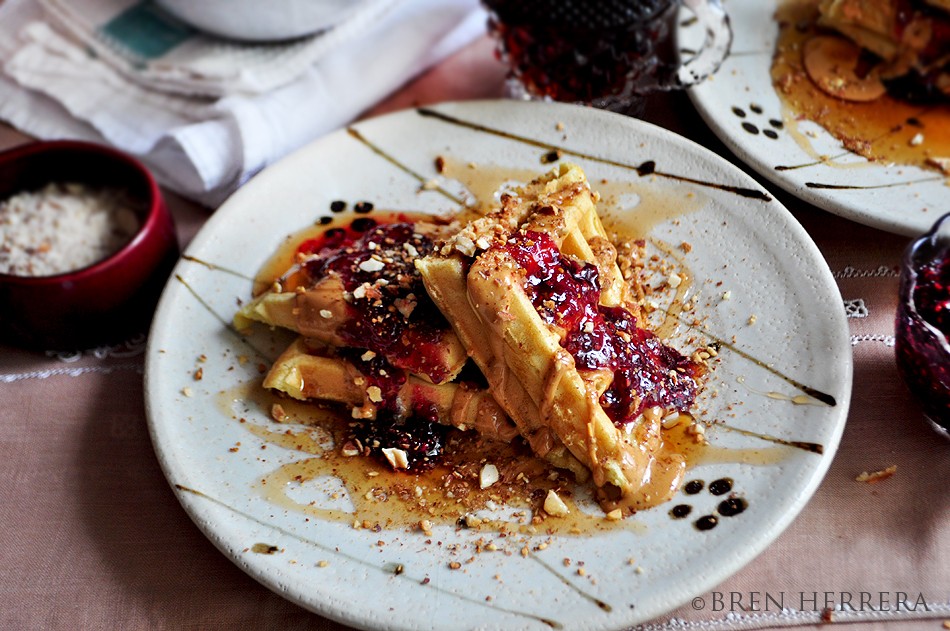 Yep. That’s right PB waffles. And a sandwich, kind of. I’ve never had them, but that little fat girl voice spoke to me a few weeks ago telling me I had to try this out. I was taken aback at the idea only because I’ve been cleaning up my diet for the past two years and have been successful at eliminating super carb-y foods. Sure, my energy level has diminished, but my espresso takes care of those lethargic moments. But I surrendered to the powerful voice within and started pondering my method. I was going to make peanut butter and jelly waffles. After all, waffles, pancakes, and French toast are my indisputable favorite breakfast food. Ever. And Ever.

But then I got to thinking…’could I really eat an entire batch of waffles if I  make them?’ Surely not. I can’t break bread  with Eddie as often as I’d like since we live thousands of miles apart, so feeding him isn’t a default option. My parents don’t like classic American breakfast food, and my sister works on Sunday mornings,  the only time I’d really have time to wake and bake. I needed motivation. Something to inspire me to make a fresh homemade batter I’d not let go to waste.

I found that AHA! moment. Last weekend while in Boston celebrating my birthday with the guy, I had some French toast at a random hole in the wall we drove upon by accident. It was mediocre, but good enough for both of us to talk about  later in the evening. Had I known E liked starchy breakfast foods, I would have elaborated on the one and only breakfast I’ve catered him to so far. That brunch last Saturday  invited a confirming conversation. Who cares if no one else eats the waffles. I will devour them and enjoy every bite regardless of the carbs. Regardless of the guilt.

This is not for the faint of heart. This is pure sugar. I couldn’t stop at only making a plate of waffles, neatly stacked and organized for a picture’s sake. I had to experiment with sandwiching this in the same manner I’d enjoy a real PB& J. This was so serious. It was not a game of aesthetics as much as it was a pitty party for my stomach. I knew there was a chance I’d end up keel’d over from the sugar cramps. But I had to go all in, making this epically fantastic. Because if no one else was going to eat with me, it had to be great enough for me to enjoy a few of.

Not flimsy and lacking life.

I settled on a happy medium and cut back on the amount I used in the batter. Compensated for that bit in the actual finished played.

That’s where the magic happened.

The waffle is simply playing the conduit to wicked amazingness in between. Since the waffle didn’t sing so harmoniously, I poured melted peanut butter over top the bottom waffle, spread delicious raspberry preserves before topping it with another waffle. And then that one got the same treatment. Another layer of peanut butter, raspberry but this time I added some maple syrup. And toasted almonds, which took place of the dusted powder.

And then it sang! All kinds of praises out of my kitchen this morning. Yes, this morning. The inspiration just came after a 1/4 chocolate waffle I had for dessert last night while dining with my family. It was decadently perfect. And the reason for the wake and bake call!

This just may be a new trend I’m forging here. I hope so! I love it. I hope you do, too. Just know there are no regrets allowed before, during, and after indulging in this stackable awesomeness. It was sexy.  Totally sexy. 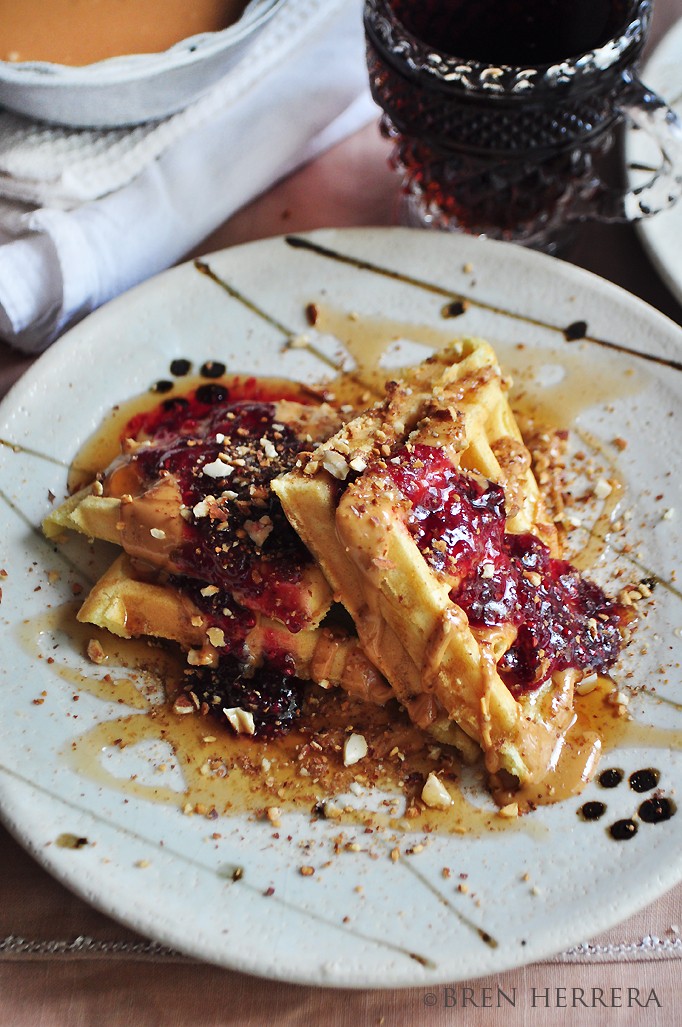 To plate, place one half of a whole waffle on plate. Pour melted peanut butter then raspberry preserves. Top with remaining two waffles quarters. Pour more peanut butter and preserves. Drizzle syrup and top with toasted almonds. Repeat for each waffle serving.

1 year ago by Bren Herrera
Didn't have time to think of you were going to seduce your lover today? Or treat your bestie to a homemade treat? Because surely buying basic cupcakes at the grocery store is just so....well, basic. And we don't do basic. If you're out of creative ideas an...

7 thoughts on “Peanut Butter Belgian Waffles. A Sandwich of Sorts.”