Peruvian Dishes in DC Are Reinvented at Las Canteras… Kind of. 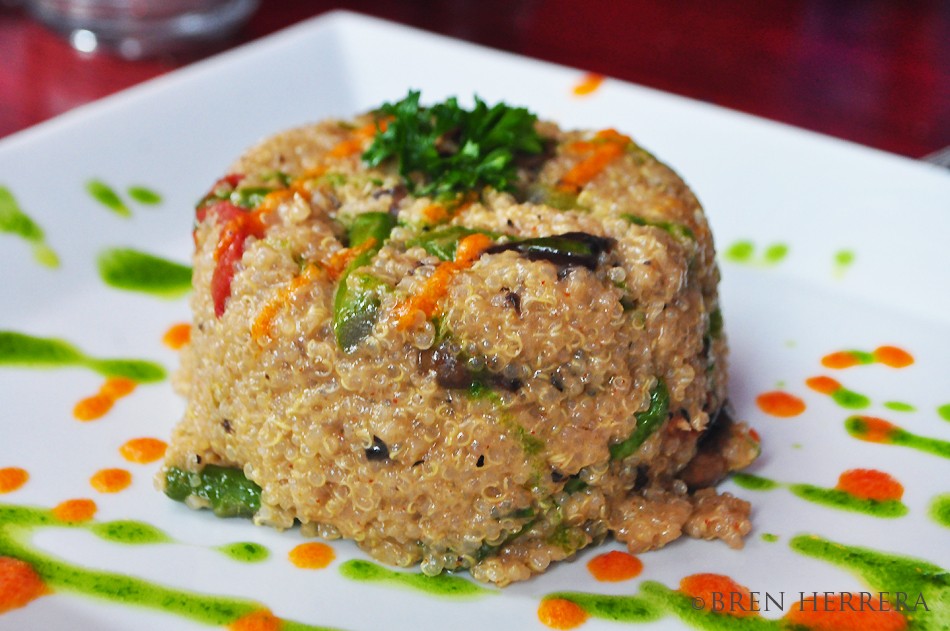 One of the most fun things about moving back to DC has been discovering the food scene. It’s a completely different gastronomic city from 7 years ago when I left for Atlanta. At the time I had an extraordinary social life, doing the most in DC.  Adams Morgan was one of my go-to spots for cool dining and reggae grooving. The famous eclectic hood which used to be a global melting pot, mostly shaped by Ethiopians, Central Americans, and Jamaicans, was the hot spot for people-watching and experiencing a small bit of the world.  And then it went through this super ugly phase of drunken college kids and misplaced yuppies… and now it’s almost unrecognizable from the cultural playground I loved 12 years ago. It’s totally gentrified and has a down played Penn Quarter vibe.

But the neighborhood has benefitted from the polishing efforts. I ended up there this week in search of good Peruvian eats. You’d think DC would have tons more fantastic Peruvian restos but it doesn’t. Especially in Adams Morgan. The one place I used to visit a lot for its great lomo saltado was eaten up. Right as I departed the area, a new one opened up and is redesigning the local perception of the diverse cuisine, which up until recently has been misunderstood. 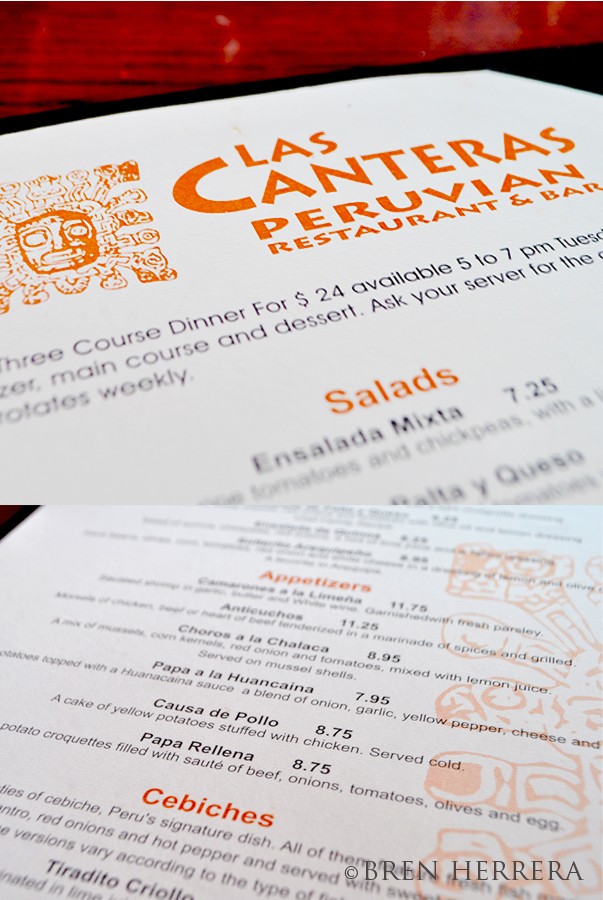 Las Canteras, planted at the entry of AM, opened up almost 7 years ago by Peruvian native, chef/owner Eddie Ancasi. His idea was to introduce his cuisine to DC without alienating the standard clientele which was almost clueless. While noshing over 3 suggested dishes, he gave me back history of his land and where he wants to take his rustic restaurant.

We started with a simple salad he insists no one in Peru makes it nor will you find ever in any Peruvian spot in the US. A bold assertion if you ask me, but hey, it’s his recipe. The stacked avocado, red onion, tomato and queso fresco ensalada is about as fresh as you can get on a spring day. It’s super tasty with great composition but don’t expect a fancy note. His parents were agri-hippies from the southern regions of Peru and during harvest season, they simply didn’t have time to cook food. An assembly of easy ingredients was the most efficient. This was their go-to salad. When designing his menu, keeping in mind he wanted to remember his childhood, he thought of this  first. It’s a hit and has been on the menu since day one. 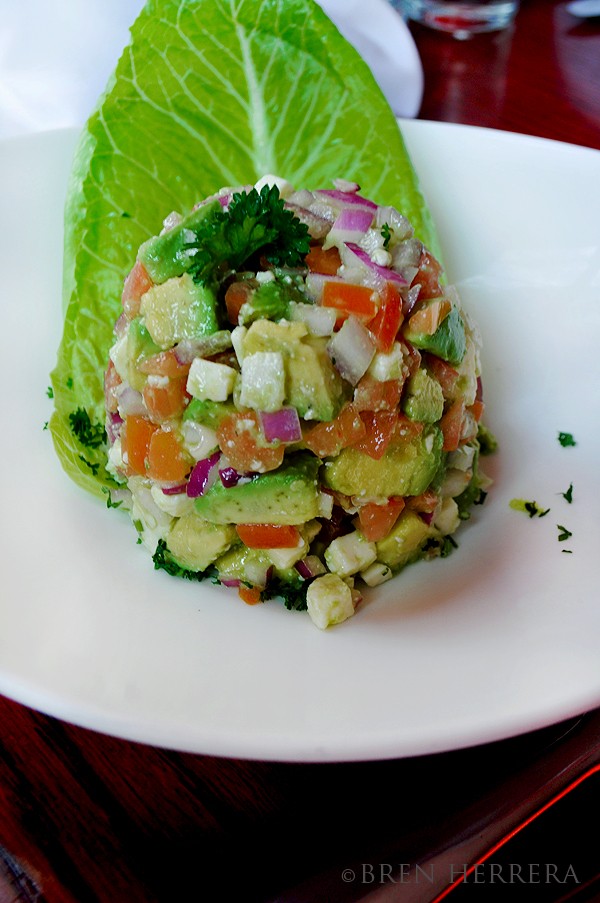 I told him I was particularly interested in his food because of my work with Sargento. I had to school him a bit first. He wasn’t too familiar with the cheese heads but was tickled by my exploration into his culture. That eased him up and he went into detail about the explosion of artful food in Peru itself. There was a time when the scene was all about every other cuisine. Now you see concepts covering traditional foods, fancy fusion, and gourmet all over the country, something he’s excited about and gives him added inspiration.

Which led us into a convo about cheese. I wanted to know how he incorporates it and which ones. It’s not a star ingredient in Cuban food, so seeing it in other Latin plates is always intriguing. But just as I imagined, theirs doesn’t call for much cooking with it either. Instead, cheese is like bread to Americans. A piece here and there with a soup spoon. A nibble of parmesan with dessert. Seldom is it used in sauces, as melts, in sandwiches, etc…

But then he gloriously contradicted himself with the best “risotto” I’ve ever had. I think. Instead of pasta, he used quinoa to make a pie high main entree of vegetables using parmesan to marry it all. This quinotto was pure genius. Just as rich as traditional rice grain risotto, but healthier and less cumbersome. It was divine to the fullest and simply stated, actually.

Our 90-minute conversation weaved in and out of US and Peruvian eating and cooking culture and how Americans are taking to the centuries old food. It’s not been missed that DC is lacking more flavor from the Andes, but for now he’s happy to provide what he knows best. While he keeps staples like causa, cebiche, his top-selling lomo saltado, and papas a la Huancaina, he’s diving into more fusion and prettier plating. And technique. Until recent decades, as pioneered by star chefs, technique was absent from Peruvian cooking.

Our last tasting was at his suggestion and was less than marvelous. I wanted to try something very typical I’ve not had before. Anticuchos is a popular appetizer of marinated beef or chicken hearts. The 24 hour tenderization is supposed to do the trick and I imagine it does so with the chicken, but not so much with the beef. It was still too tough and a hard bite to swallow. But the pickled onions? I’d eat a whole bowl.

Dining there is a delicious experience for sure. Go there for solid Peruvian with sprinkles of international flare. It’s affordable with main dishes maxing at $16 and national Pisco concoctions at a standard DC $8 bill. The décor certainly places you in modern Inca hut. Plus, it’s always a good sign when the chef/owner is native to the cuisine. He can best impart knowledge and authenticity.

Oh, and the best thing I learned was this: “Aji amarillo is the golden child of Peruivan cuisine. Without it, you don’t really experience our food.” I sipped on my chicha during his enthusiastic proclamation. I can’t handle that kind of heat.

*I enjoyed a private visit as part of my work with Sargento.

3 thoughts on “Peruvian Dishes in DC Are Reinvented at Las Canteras… Kind of.”