Richmond, VA: A foodies secret gem. A history and food series, part uno. But first, The Jefferson Hotel & their food 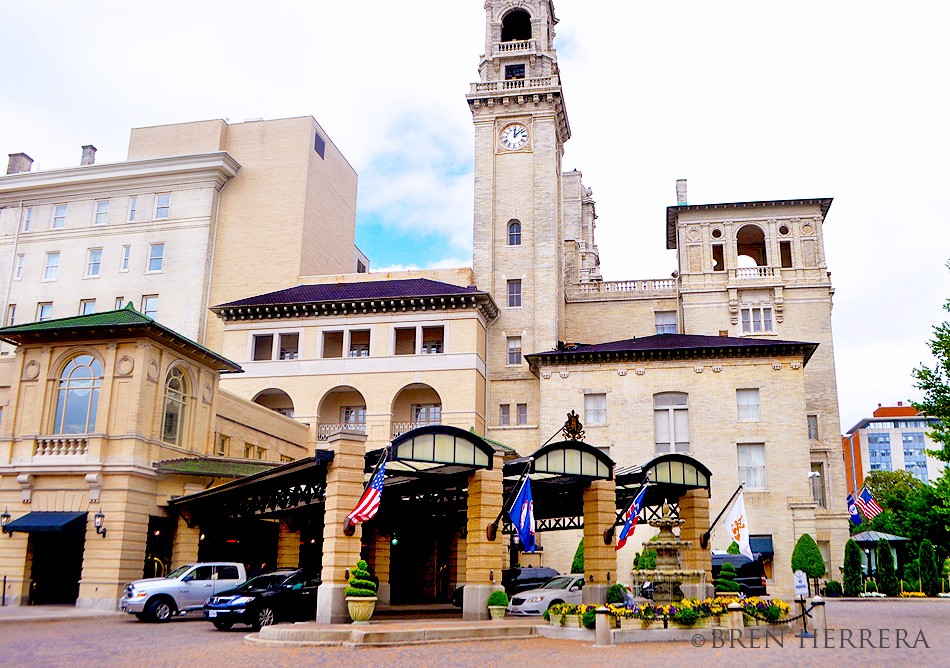 I grew up right outside of D.C., approximately 6 miles. Though I lived in Atlanta for almost 7 years until two years ago, D.C. has always been home. More specifically, northern Virginia. I claim D.C. for practical purposes, mostly because I worked in the city for 11 years before leaving the messy corporate life. Another story to entertain you with at some point. For now, let’s just go with how I live 90 minutes from the Richmond, the State’s capital and have never visited it, until exactly one year ago.

My only encounters with the city were in passing as I sped through 95 on my way to and from Atlanta when I’d come home. My visions of Richmond were all industrial, with buildings on my right and left, spitting out fumes. And the mad traffic in both directions was always reason enough to deter me from going just to be going. On one return to Atlanta, traffic was so horrific, I turned around and stayed an extra day. I was already 30 miles out. It’s that bad.

But, my entire perception of a “dilapidated, hooded-out” borderline-ghetto town, was reversed in an instant. My purpose in visiting was to engage in the exploding foodie scene which is everything to talk about. 4 days of modern cuisine, with a hint of good ol’ southern tradition, all juxtaposed with fantastic historical context gave me a new found respect and admiration for a city I have totally ignored for 25 years. I did and saw more in those 4 days than I thought Richmond ever had to offer.

And so because I fell in deep love with a  city so close to home, I owe my native state, my local readers, and those of you everywhere else not familiar with this gem, a series of stories to give you real view of this charming town. I was really taken by full surprise. I’ll keep this introductory post simple, introducing you to The Jefferson Hotel, a state institution, and where we stayed, and its fine American cuisine with a hint of French flair.

It’s an opulent place, full of old war regalia, big couches, domed crystal chandeliers but most notably, your welcoming concierge: A larger than life statue of Thomas Jefferson. You can’t miss him. He stands tall in the epicenter of the hotel’s courtyard. Equally drawing are the lovely stained glass ceilings. I’m a fan of TJ and all, as a graduate of UVA, but those ceilings are stunning pieces of art, worthy of recreating in my own eventual home. 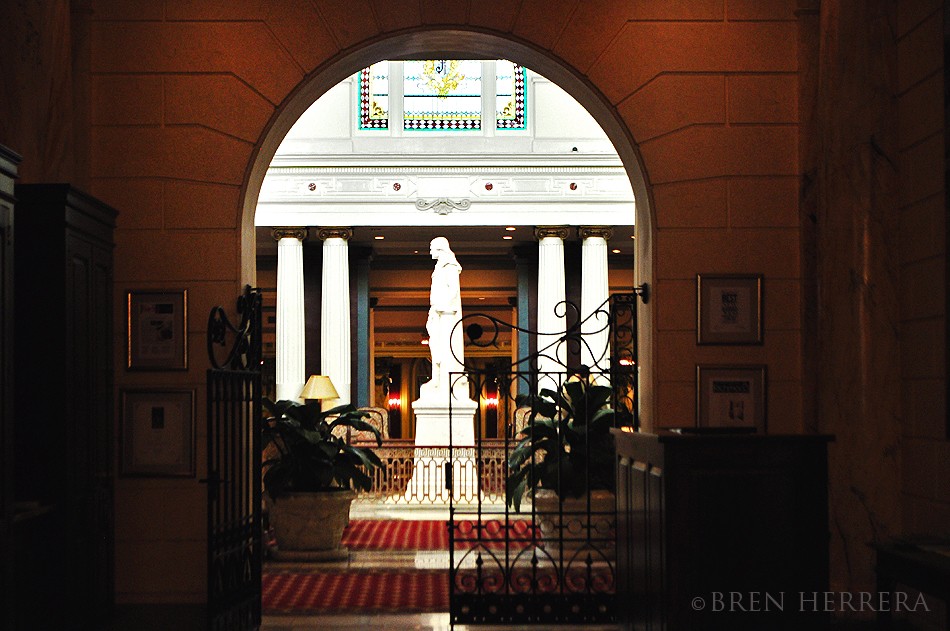 Get married there, host your afternoon tea at 2, shop in the dainty and well stocked boutique just below the ballroom style stairs, and sip espresso in the tucked away coffee bar on the other end of the palatial building.

Go back and stare at TJ. 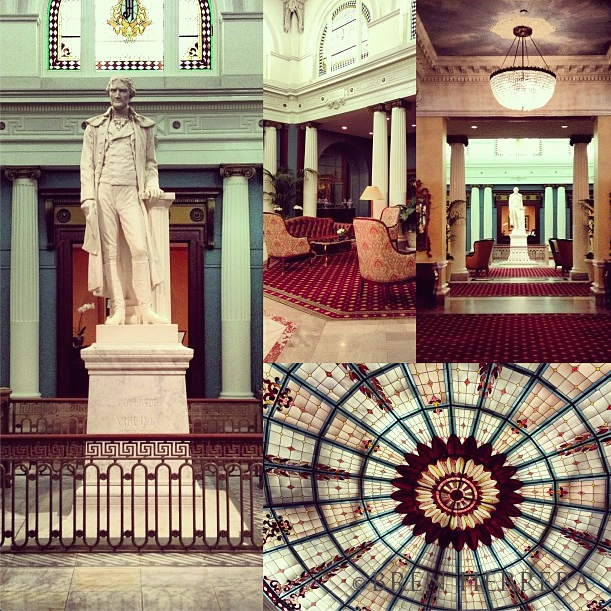 Lobby grandeur apart, the actual accommodations are formidable and vastly comfortable. The rooms are bigger than any NY apartment, having a sitting area, Bose sound equipment, and various mirrors. I’m all about comfort and service so I was thoroughly pleased to be welcomed with classical music and detailed turn down service. The small things matter. Not to mention, amenities you pay a good penny for in boutique retailers are constantly replaced. You know, the Molton Brown brand which I lush over. It did not escape me however that most of the hotel’s staff was black and dressed in black and white butler-esque uniforms. As kind as they all were, I wasn’t too keen on feeling like I was still set in the days of segregation. I know it’s Richmond, where slavery and racism was (and still racism remains in some parts) deeply seeded; but a hotel of that magnitude should be modernized in that aspect, no matter how standard and traditional its aesthetic is meant to be.

I still enjoyed turn down service. Every night. Oh, that classical music did it to me every time.

If you’re staying there longer than one night, you have to enjoy lunch or dinner at the hotel’s main attraction — Lemaire Restaurant — lead by executive chef  Walter Bundy, a Virginia native. Since lunch was especially prepared for the small group visiting, every detail was covered. I suspect any guest would receive the same attention. I mean it is the South and hospitality is their thing. 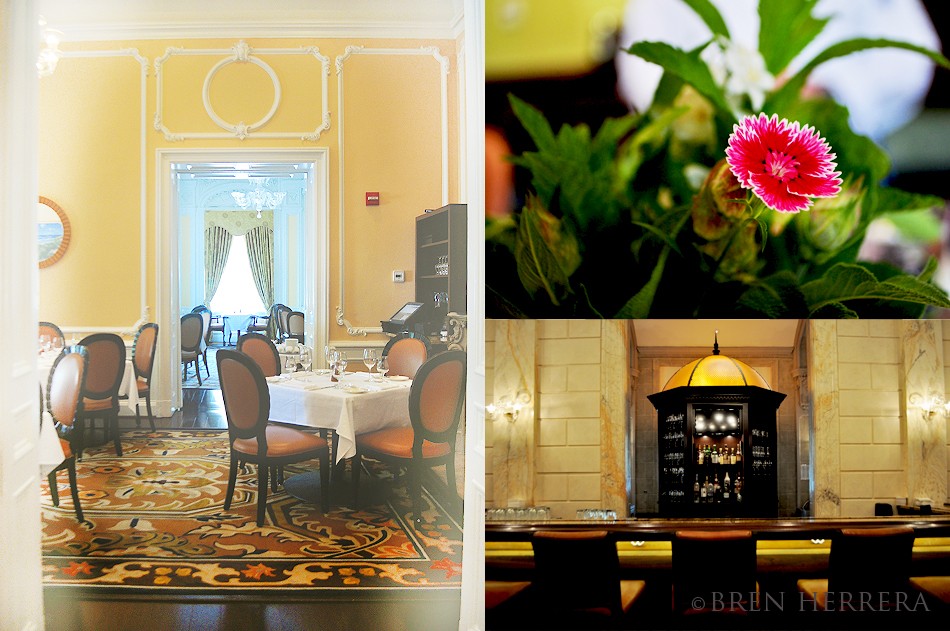 A gorgeous entrance, beginning with an amber-esque men’s cocktail lounge, flooded by leather seats and a robust bar,  leads you into a very presidential-style dining room, intimate enough for 20 or so. The larger dining room is private with darker woods, creating a more stately ambiance. High ceiling and tall chair backs definitely remind you that you’re fancy company and in good care. 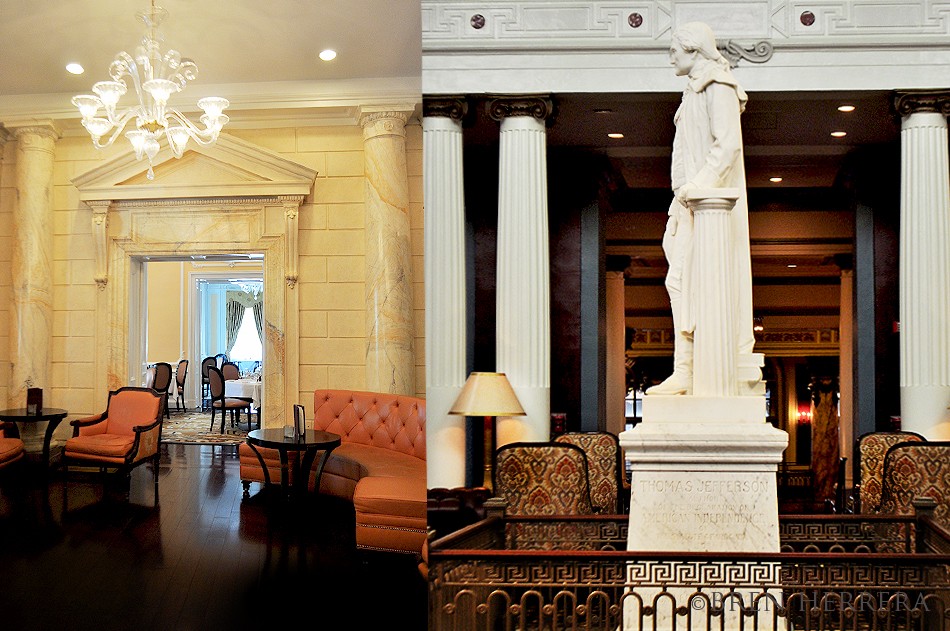 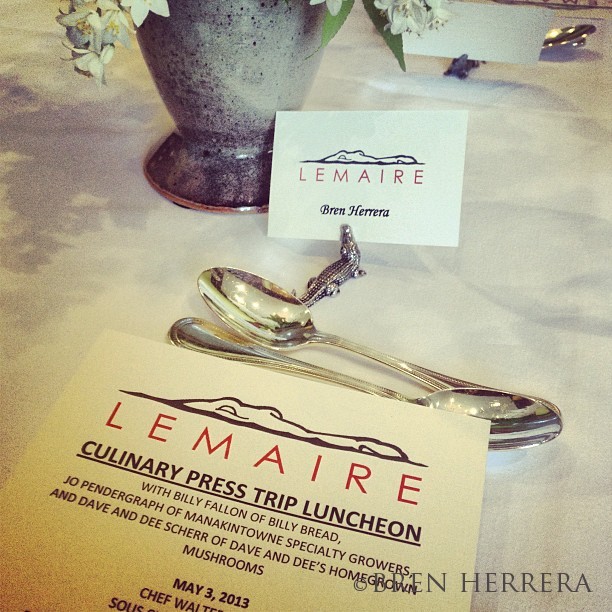 Between the starter bread offered by Billy Bread, a local hot kitchen making extra delicious sourdough bread, and dessert, I was over the moon and gluttonous. Lemaire’s approach, as explained by the chef himself, is very organic, attributing their success to the mutual support and relationship he’s established with local farmers. The mushrooms we had in our main course were local and too good not to beg the farm owners Dave and Dee Scherr of Dave and Dee’s Mushrooms, whom I sat next to, to share a small bag with me. The fiddleheads in the salmon dish were extravagant and simply beautiful. They’re also locally sourced and probably the prettiest element of lunch. Though, I did love the alligator name place holders.

There’s a story behind the alligator you’ll see throughout.

Ask anyone and they’ll tell you.

But the restaurant really does boast itself on taking classical techniques and reviving them with modern plating styles, making the food much more attractive. Presentation is everything. Chef Bundy and his team didn’t want to reinvent the wheel, just polish up. The decorum, carefully sourced ingredients, and service definitely lend to being a must-visit in Richmond. 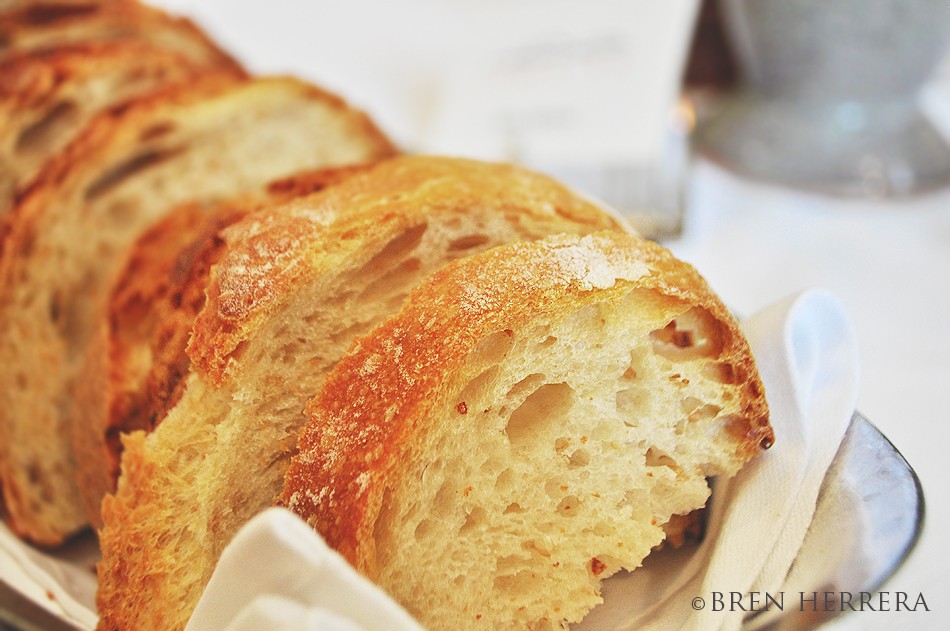 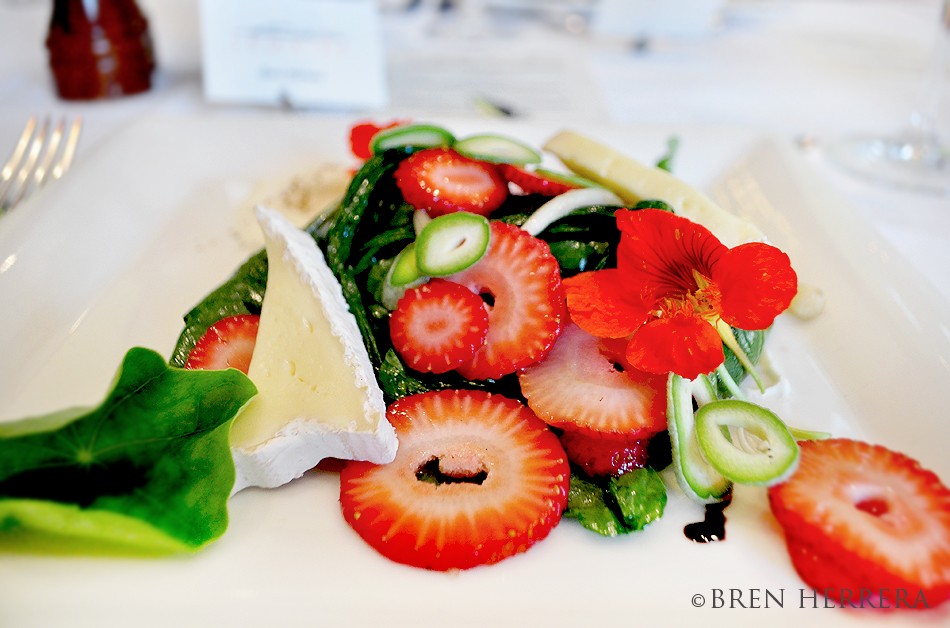 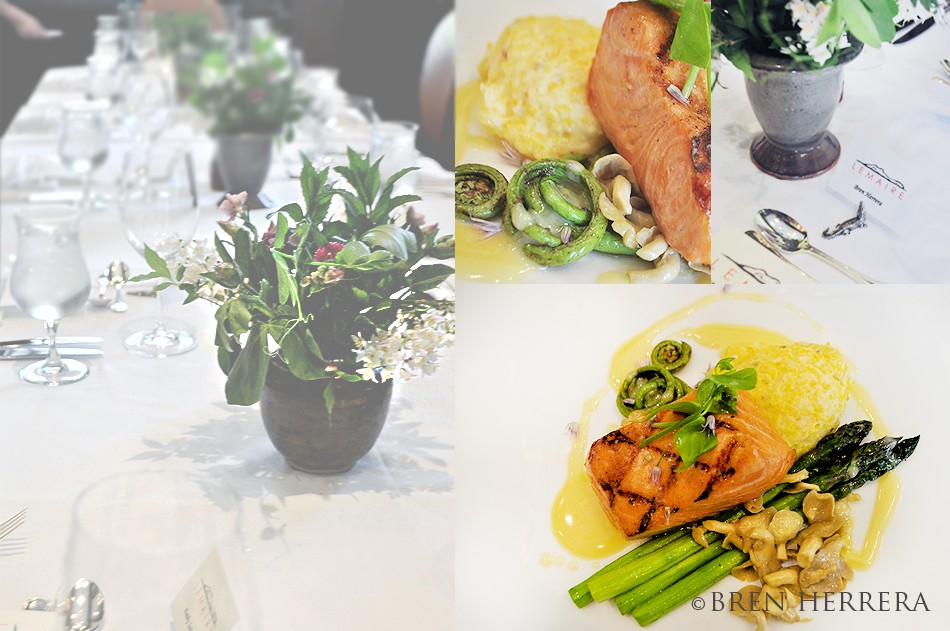 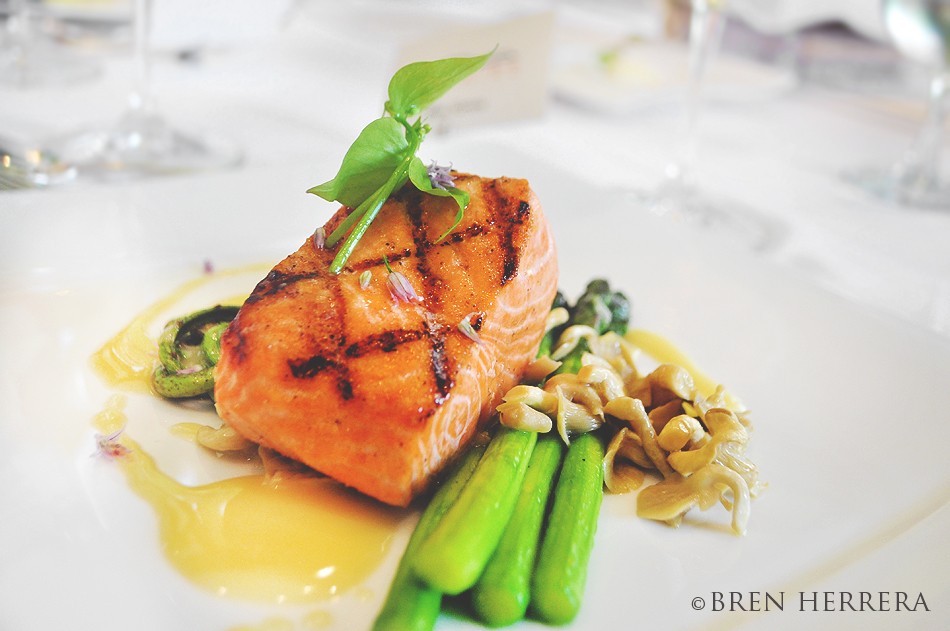 And what can I say about the dessert. One solid year later and I’m still talking about it. It was a rich dark chocolate bread pudding made with Billy’s sourdough, topped with hand whipped mint chocolate chip ice-cream, crème fraîche, and rhubarb. I gasped so much over that postre that when I started teaching cooking classes just three weeks later, I adapted the recipe, courtesy of chef Bundy, and offered it to my students. And then I made it for a private party. And then I blogged about it. And then I had to feature it in the recent issue of B! Inspired. It’s as if I’d never made great desserts myself or enjoyed a host of other deliciousness, the way I reacted. But it really was sexilicious. But I couldn’t finish it! Sacrilegious, truly, but it was just too decadent, if ever there was such a notion. 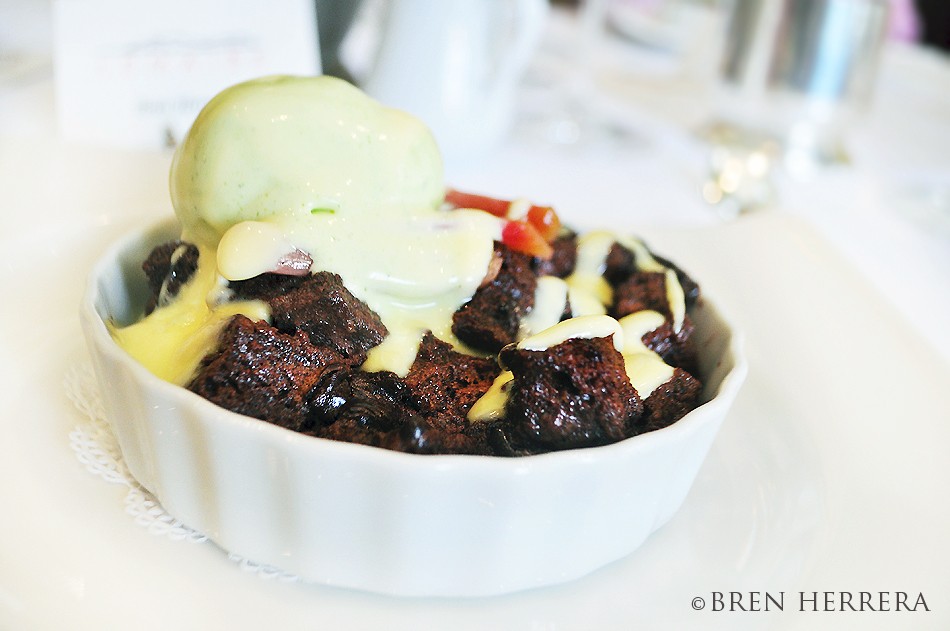 This was the second of 4.5 days of food, food, and more food with some history lessons and fine art exposure intermixed. But The Jefferson was so special in how they extended themselves, I promised my parents I’d take them back for their annual Christmas celebration where they deck out the place a la Biltmore Estate; or take a day trip with my girlfriends and indulge in their famous Sunday Champagne Brunch. I hear it’s all the buzz.

I suspect this isn’t the last time you’ll hear me talking about that bread pudding but I promise not to mention it in the follow up posts to this Richmond series. There really was way too much else going on to justify brining it up again. Everything else was just as worthy. Well, almost.

Next in the series:

Culinary Walking Tour: Hitting up some local and street finds

*I enjoyed this visit and lunch as part of a culinary press trip.

52 thoughts on “Richmond, VA: A foodies secret gem. A history and food series, part uno. But first, The Jefferson Hotel & their food”