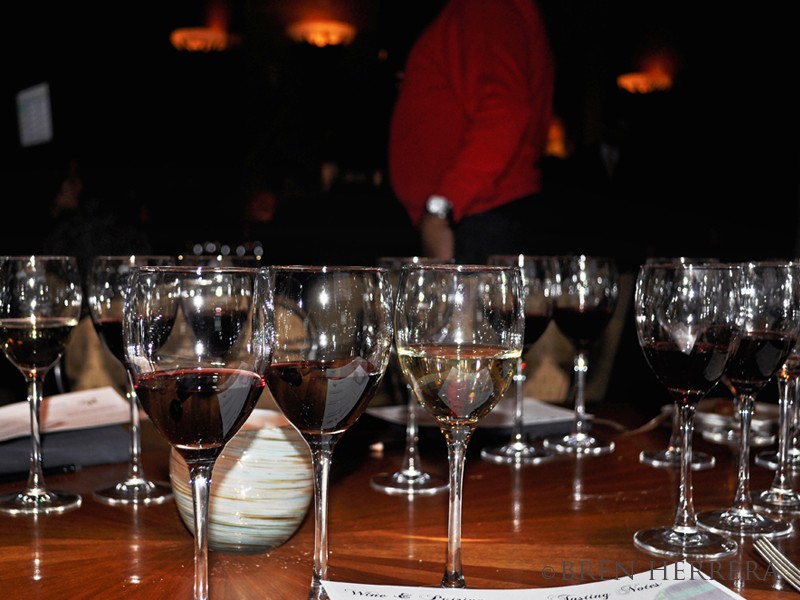 Knowing your wines is an art and requires a superbly refined palate. Pairing those same wines with the right food is an in-depth knowledge of both. Unfortunately, I’m not super well-versed in all the vinos out there, but I can discern exactly what I like (and don’t!) and can pair according to my palate. For instance. I’m not a merlot chic, but I love Shiraz— my favorite among reds. I’m not into whites but have affairs with Riesling and some Chardonnay’s.

Thankfully for me and those that find themselves swirling a glass longer than need be, there are professionals and serious afficionados that know how to lead us in the right direction. Hell, they may even teach us enough to allow a facade—even if only for the subsequent night out!

As part of Atlanta’s initiative to be respected as a suitable food scene, a lot of restaurants are expanding and rolling out  traditional and social media based wine tastings in an effort to engage their customers more intimately. I’m particularly thrilled about the moves certain spots are taking. It means I get to sip on wine I’d not normally order and more importantly, have an added reason to go back — all without becoming a lush, of course.

For starters, The Four Seasons (which I have a bias for) knows how to do things at the right time. Last november, the hotel’s signature restaurant, Park 75, which I’ve reviewed here, invited me out a chic evening of wine tasting and pairings, co-hosted by Atlanta radio personality, Frank Ski. The city knows Frank for his annual wine event and as such has developed a reputation of a bona fide connoisseur.

The man likes to drink. 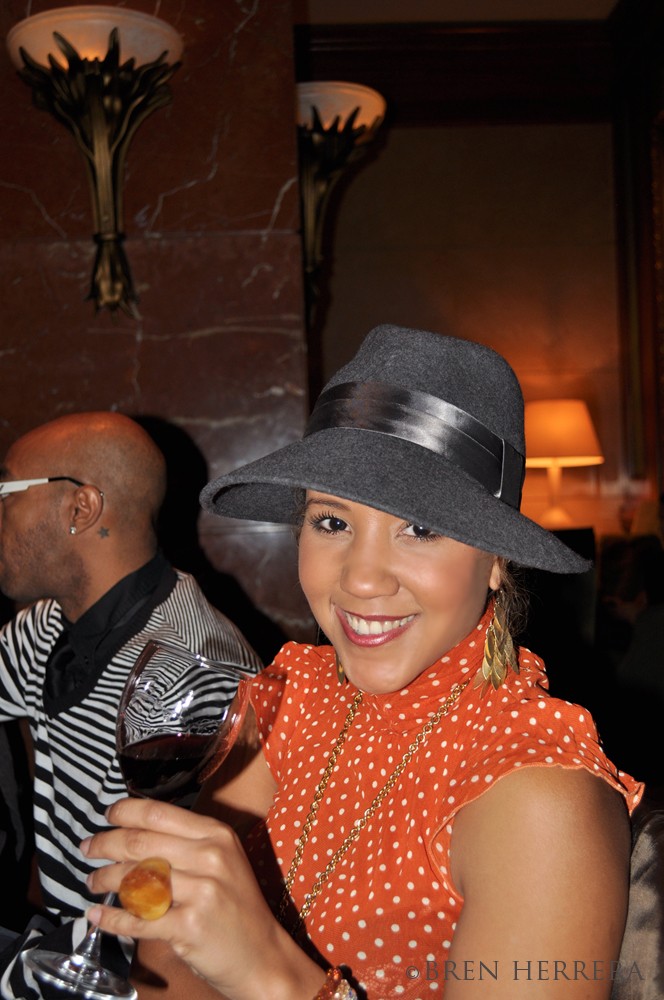 The evening was set up as an interactive tasting where we got to  tweet about our experience. I came in a bit tardy and was seated at Frank’s table. So, I bombarded him with all sorts of questions and he openly shared some of his favorite vineyards in Sonoma Valley. Truth be told, there was a known sommelier there who was introducing the wines and explaining in rich detail the background and nature of each wine. I didn’t drink much, I swear, but I do not recall seeing him!

Anyhow, the tasting was their innaurgural social media event of the like so having only 3 pairings was a bit on the short side. I’d expect to have seen at least 5 wines on the roster.  Of the 3 featured wines, the Loosen Bros. Dr. L Riesling was spectacular.  It wasn’t too sweet or fruity, rather had a great balance of both characteristics. It was paired with the Asian Spiced Shrimp Dumpling, Red Coconut Curry–which I passed on. If you follow my blog, you know why. No food meant more wine. And I did just that–enjoyed two more glasses of the white.   The Chappellet Mountain Cuvee was also really nice with a rich barrel finish, was paired with “Steak Frites” Saty, Red Wine Demi.

The entire evening was just what I needed on a Wednesday night. After the tasting, we took a tour of the  kitchen and bit on mini housemade chocolates wrapped in shiny gold paper. 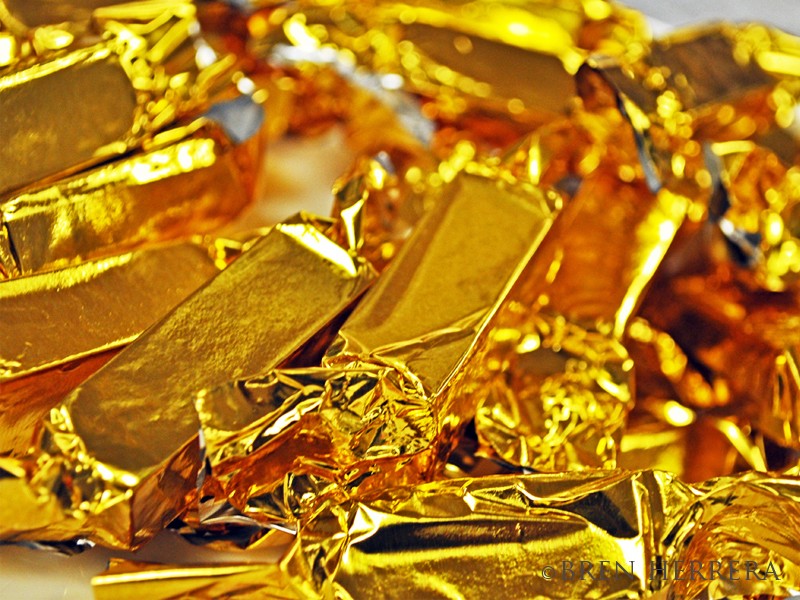 Things were calm until funny man Chris Tucker showed up…who upon first look you just want to laugh. No, really. He and Jackie Chang. Together. In China. Love it!  Chris and I had been previously and informally introduced through a mutual friend so when I told him who I was the convo quickly turned to Latin food,  travel, politics and Cuba– all the things that caused the introduction in the first place.  He didn’t crack any jokes and was very attentive to my political discourse and rhetoric about Castro and communism. All that yappin’ made me hungry so we stayed for dinner and I ended my night sipping on a cordial, whose name I need to find, courtesy of Frank. 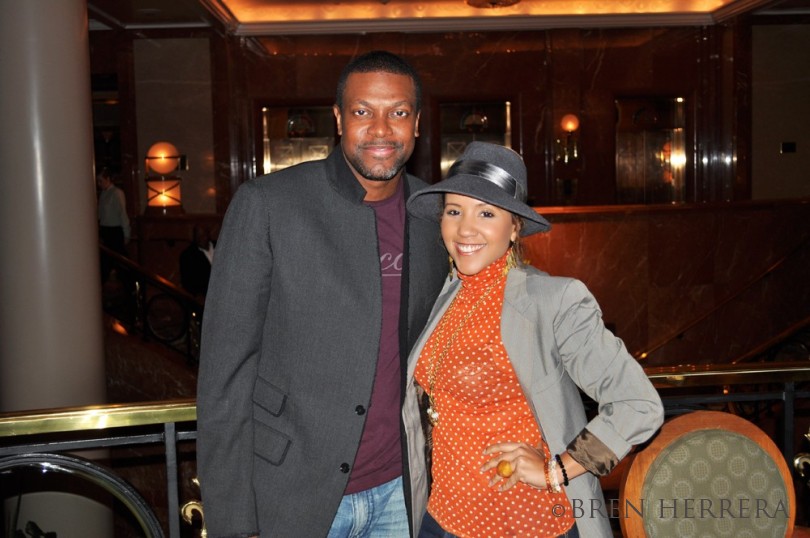 Last I heard, the hotel’s not sure if or when they’ll entertain another tasting. However, the swanky bar lounge continues to offer those wines (and others) which you’d enjoy– so long as you order the right food! That’s the tricky part! I’m sure you can request the assistance of the resident sommelier for a memorable evening.

Here’s what I had for dindin. All well-made and served by professional staff ensuring our evening was perfect. 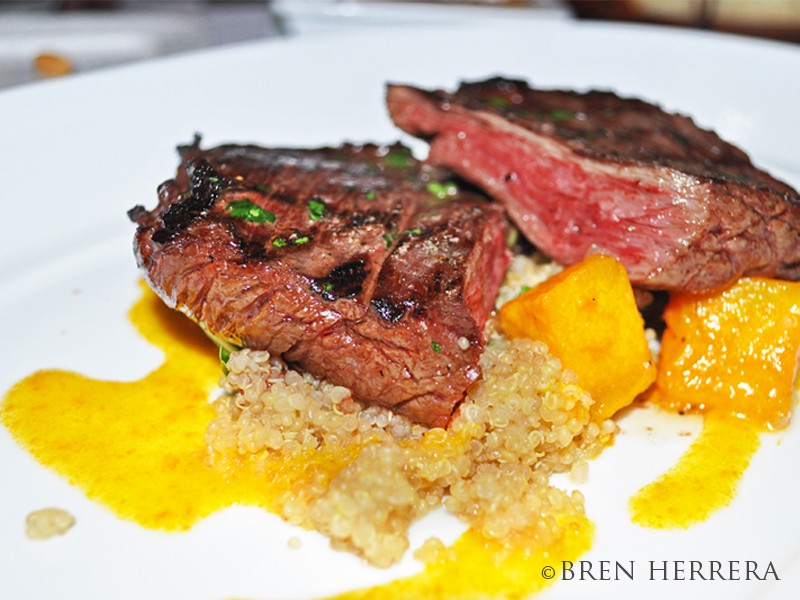 And then last night. Boy of boy was last night a painful one– in a good way, no doubt. Café Circa which I also reviewed here, is celebrating their three year anniversary. They’re going all out as they should.  Good restaurants around here just don’t seem to make it past 18 months. And if they do, they’ve turned around about 3 chefs. Such a bad look.

But, CC is doing its thing in the 4th ward this week. It all got kicked-off with a laid-back wine tasting. A local wine rep came in to discuss some of his preferred brands. Chef Hopeton, whom I’ve come to appreciate, personally brought the dishes out to us at the bar. This gave us all an opportunity to question his pairing. He’s kinda shy so he smiled and let the rep jazz up the duos. The wines–all full glasses might I add, started coming out and I started to relax.

I paced myself once I saw the menu. 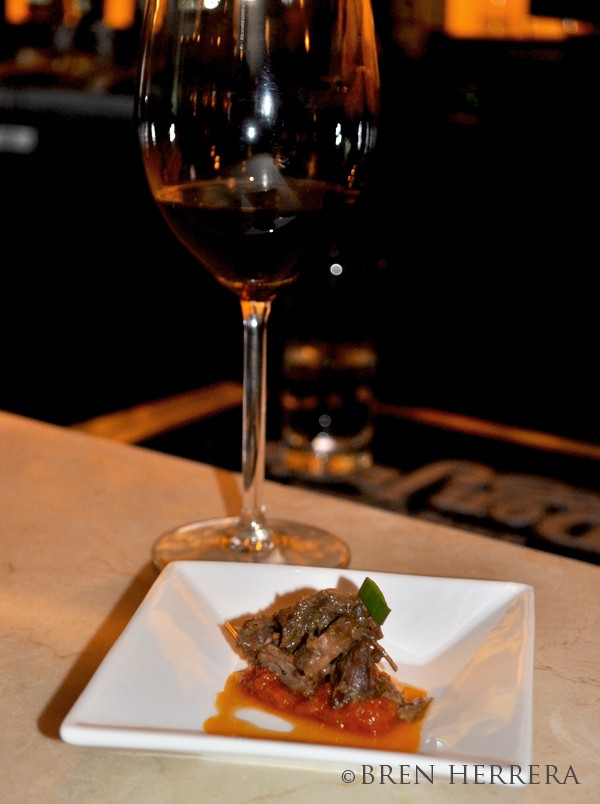 I’m was all in it, loving the wines, especially the Mark Davidson North Bore Shiraz (an Australian 2006 vino), paired with the Stewed Goat with Habanero Tomato Sauce. This wine was fantastic. It was bright and fruity and tasted like a really delicious cigar. I’ve never puffed on a stogey but something about that wine gave me the impression that a really good one could taste just like that. It was packed with flavor and had a lovely finish. I asked for a 2nd swirl. 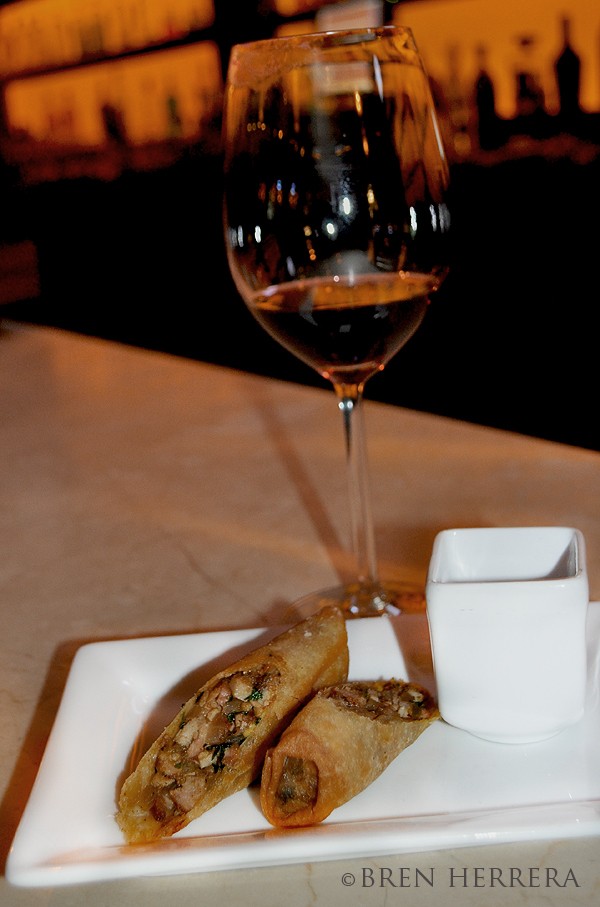 The Wente Chardonnay was pretty special, too. It was sweet and aromatic but I don’t think pairing it with Strawberry and Goat Cheese Cucumber was the way to go. Too much sweetness going on. A more savory dish would have released the right notes and after taste of the wine.

If you like dry and oaky tasting wines, try the Silverstone Cab Sauv. I wasn’t a fan though it  contrasted nicely with the Cuban Chicken and Plantain Spring Rolls dipped in a Guava Sauce.

The Shiraz was definitely the perfect sip to finish off the tasting. 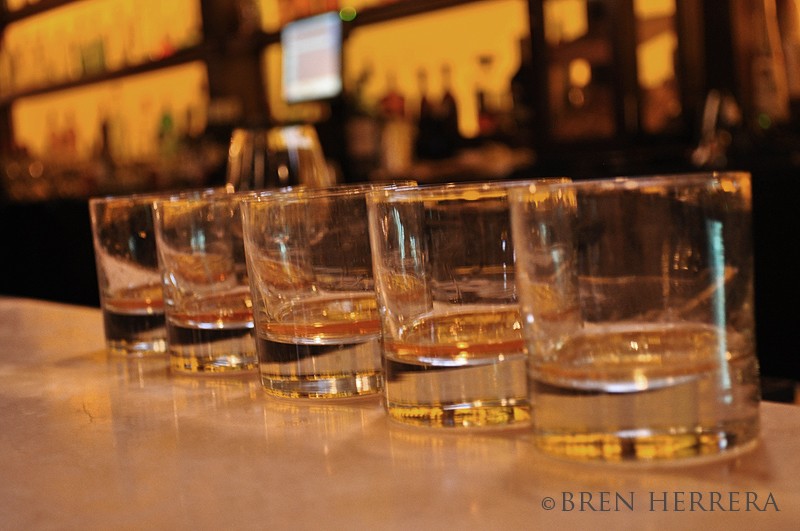 The folks at Circa have done their research on what diners want. That, or they really want to show you how grateful they are for continued business. After all that wine, the rep lined  up 5 shot glasses and poured Scotch. Yes, good ol’ Whiskey. I took a whiff of that stuff and was hurting. The chef noticed my reaction and made his way to me. “Sister, let me help you here!” Literally. He said that. I must have made the ugliest face a chick in 5.25″ stilettos can make as I tried to swallow that chest hair burning stuff. Pardon me!! I just can’t do it. I will say though, of the 5 options, the Wemyss Smooth Spice King 10 yr . is an easy and not so painful  choice to start with if you’re afraid to go all in!

It was the only one I managed to finish on my own.

If you’re into Whiskey, don’t rely on my opinion as I’m not interested in it at all and don’t know how to fairly rate them. I will share what we had in the event you’re curious:

The restaurant is inviting guests to party with them tonight through Saturday with different culinary activities at the haute spot. If I wasn’t on this new year’s diet, I’d be sippin’ up again this evening. And then again on Saturday!

If you’re in Atlanta this weekend, drop on by Café Circa for any one of these delicious evenings:

Since Thursday is the new Friday, Café Circa is hosting a special celebratory happy hour from 5 to 7 p.m. with sounds provided by DJ SugarCut and $5 Ciroc cocktails, $5 small plates and $10 entreés.

Executive chef Hopeton Hibbert has created a three-course dinner that includes a glass of champagne for $25 in honor of Café Circa’s three-year anniversary.

Curried goat with peas and a rice cake and buttered baby cabbage or Jerked salmon fillet with tomato and spinach sauté.

Lastly, there’s Montaluce Winery, located North of the city. I’ve had lunch at this privately owned vineyard, but haven’t spent the time doing a formal or pairing. Individually, their wines are well-made and very tasty. I’d recommend any one of their wines, especially their Rosé and hope to see them offered up in more In-town restuarants. As soon as I do a tasting, I’ll be sure to let you know what paired the best!

I’d love to see more restaurants initiate wine tastings. It makes for a diverse night out and we all get to learn from what the experts have to say. Knowing what you’re drinking and why it goes with your meal can only end in a delicious and tastebud-provoking experience.