I attended the Inauguration of Obama, front and center. 900 ft. from the Capitol, with the ability to see the President come out of the red velvet curtain, with my own eyes and not one of the 100’s of jumbotrons scattered throughout the National Mall.

I know this blog is strictly about food and my travels as they relate to food, but I’ve been in DC witnessing history and indulging myself in all the “new era” events. I wanted to share with you what I’d been doing. A full recap of my 4 day trek throughout DC, my real home, can be seen here on Tuesday the 26th. I’ll just share this 1st picture here because it really just captures the peace in which it all happened.

It was absolutely the most beautifully moving event I’ve ever attended.

BUT! No real heart-felt commitment of walking 15 miles in frigid weather, comes easy or unrewarded. After walking for 2 hours, we were starving. I felt the whole in my stomach rapidly growing. We stopped at Potbelly’s, my absolute favorite sandwich joint, and the line was over an hour long. Every Starbucks along our exit route was no better.

So we just kept it moving.

Thank God my mother knows me well. As soon as we made it back home, dinner was waiting! When I’m hungry, I become a vile, ill- mouthed Cubana that can’t be stopped. It’s a chemical imbalance, really, but what can I do? I’ll even admit that I get it from my father.

Split peas or chicharo with the best flank steak was on the table, waiting to be poured over steamy jasmine rice. I had two solid plate fulls. Green split peas are my absolute favorite. Better than black, red and navy beans, split peas tickle a part of me that causes a jovial reaction. They’re even better when accompanied by croquetas. Interestingly enough, they’re ugly. An utterly unattractive green color, somehow I’m able to overlook the lack of aesthetic appeal. My mother’s recipe calls for butternut squash and Idaho potato. No need to let yo know they’re cooked in a pressure cooker! Tho, any vintage or new cooker will advise NOT to cook split peas in pressure cookers because of their “frothy” destruction. Those little suckers really do split! But good Lawd they are delicious. As with most of the beans I eat, I’ll sometimes for go the rice. Tilting of the bowl, drooling right into my mouth does occur during those times.

And I’m not ashamed to do that anywhere!

Another irony: my mother hates split peas. How could she!?! Ella esta completamente loca! Senseless.

Well, since my mother indulged me on Tuesday, I indulged her this morning before flying back to Atlanta. See, she loves tuna. Any grade of it. She’ll kill for it. Did once, actually in Cabo San Lucas a few years back.

So because we are celebrating a new administration, a new era and a new eating culture in Washington, I decided to make something new for my mother. I won’t boast and claim this is novel. In fact, I’m sure someone has made this somewhere. Probably even better! But I don’t care about how others’ have made it. Doesn’t matter to me. I came up with it last week while in Atlanta and bored with eating plantains for 3 straight days. I mean really, how many different ways can I muster eating that fruit? Even the savory options were testing me. So I pressed forward in pulling out different ingredients.  Ultimately, I was fully satisfied. And so was she and the 5 others that bit into these.

Shoestring potato crusted Albacore cakes! Oh.my.goodness. Talk about a great deviation from Cuban food, which you know is my favorite, hands down! I’ve said over and over again that I am going to dive into other food this year. Chinese wouldn’t be a bad start since my grandfather es Chino. Okay I digress. So these tuna cakes were off the chain! I can see myself making these far more often. Again, nothing over the top or complicated, which is the really nice thing, especially since the non-cook or enthusiast can get their hands dirty with this one.

I think we all know what panko is, right? I’ve made various dishes with this Japanese bread crumb. Even the first batch of these cakes was made with panko. But let’s talk about shoestring potatoes. I really never eat these, don’t care to, but it’s a necessary ingredient in the popular Cuban “pan con bistec”. Our thin steak sandwich must always have these papitas in them. It’s all about the crunch factor. And, I’ll be honest, the only reason I used the shoestring potatoes is because I was entirely too lazy to go to the bodega to get panko. I try to be practical.

But they worked! Like shoving my foot in that 8.5 shoe (1/2 size too big) I recently wore to a resto dinner review, by padding it with cotton balls. It worked!

Now I’ll boast. The cakes were perfectly flavored, the crunch factor was totally there and I was again renewed in my interest to play around with other peoples’ food! It felt good. I felt like a damn genius in being able to open up my cupboards and just come up with food that is really good on the FIRST try! As long as my picky padre didn’t form his lips to say they were too salty, I’m good!

Don’t get me wrong here. I’ve made salmon cakes before. A completely different recipe those bad boys were, and certainly nothing so crunchy. In this case, the panko works. The shoestring works. The soy sauce and capers work. And of course, no one over here is questioning whether or not “frying” works.

After my mom devoured all 3, I really felt like the experience of all things new and changing, was complete. All I need now is a kick a** sauce for my new spicy tuna cakes! Suggest one, please, based on the recipe below! 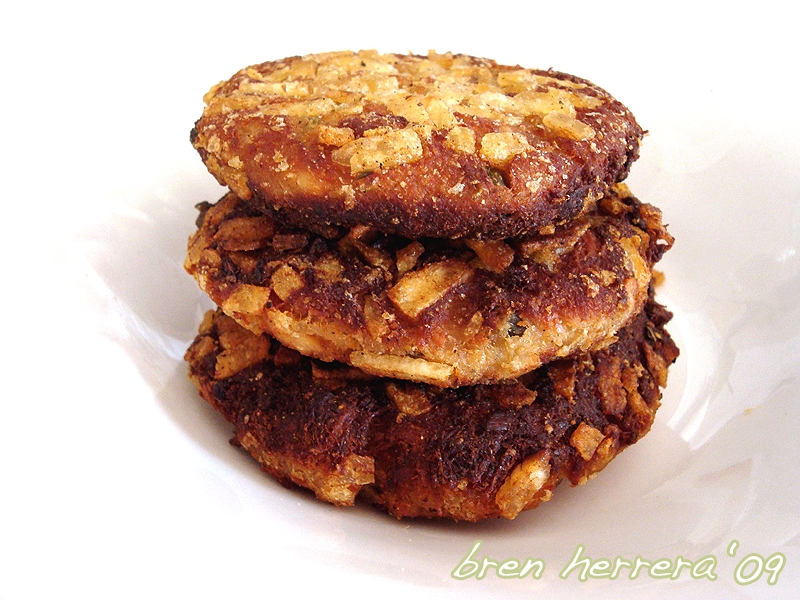 Drain tuna completely. In large mixing bowl, add tuna and fork apart. Add remaining ingredients, except for shoestring potatoes. Combine well. Take a palms worth of tuna mix and make a 3″ patty in your hand. Smooth the edges with your finger. Cover both sides of patties with shoestring potatoes (if not sticking, you can do a light egg wash). In large skillet, heat oil on high (1 cup of oil for deep fryer if you have one; about 1/2 cup for skillet). Using tongs, gently place cakes in oil and cook (pan-fry) on each side for 2 minutes or until golden brown. Transfer to paper towel covered plate and allow oil to drain.

A Lesson in Pressure Cooking